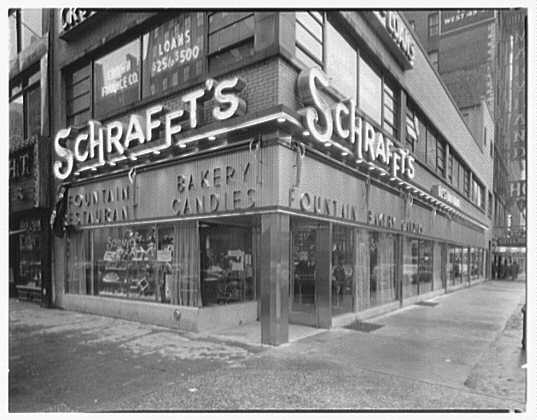 Marion Cunningham, renowned as the woman who wrote the contemporary revision of “The Fanny Farmer Cookbook,” revealed this recipe in her column in the San Francisco Chronicle just as I was collecting and testing recipes for “Arthur Schwartz’s New York City Food.” She noted that “many New Yorker’s have such fond memories of Schrafft’s large, crisp cookies … particularly Schrafft’s Butterscotch Cookies with ground pecans, which seem to have been an all-time favorite.”

When I called her – she’s a friend — to find out where she had gotten the recipe and could she guarantee that it was the genuine article, she told me that her fellow Portland, Oregonian, friend, and mentor, James Beard, was in fact the one who requested she obtain it. He adored them.

“He told me to call this number at Schrafft’s,” says Marion, “and they’d give it to me. Of course, the formula I got produced over 10 pounds of cookies, but I’ve reduced the recipe so it can be easily made in a home kitchen. Beard said they were ‘every bit as good as the originals.’ “

As Marion taste-tested them on James, I taste-tested them on Joan Hamburg, New York’s first lady of radio, and my former so-called “radio wife.” She remembers that what she liked best about them as a little girl was that they had uneven edges, and that she would even the edges out by taking tiny bites around the perimeter – until the cookie was all gone. Joan thought this recipe was absolutely the real thing. She nearly swooned when she saw the uneven edges. And they are very crisp, as cookies always used to be, a quality that, most unfortunately, only solid white shortening can provide. That should make these an only sometime, nostalgic treat.

One little thing, however: I didn’t really think they were buttery enough, so I consulted my friend James Carrozza, The Cake Chef of Staten Island. He thought Schrafft’s probably added butter extract to give more butter flavor without boosting the actual butter content. Besides being expensive, an increased measure of butter would compromise the crisp texture. Schrafft’s was not above using such almost ersatz ingredients. For instance, the original recipe for the famous cheese bread, which you can, indeed, find in “Arthur Schwartz’s New York City Food,” called for a flavor booster called “Cheese Tang,” more or less the product used to coat Cheez Doodles et al.

If you have a strong arm, this dough can be mixed by hand with a wooden spoon. But a hand-held electric mixer will do the job well, and, of course, you can use a stand-up mixer.

Combine the butter and shortening in a bowl and beat for a few seconds.

Add the sugar and beat until creamy.

Add the egg, dry milk, and vanilla, and beat until light.

Combine the flour, baking soda, and salt in a bowl. Stir with a fork to mix and lighten.

Add the flour mixture to the shortening mixture and blend well.

Stir in the pecans and mix well.

Bake the cookies for 10 to 12 minutes, or until golden brown.

Remove from the oven and gently lift the cookies onto a cooling rack. Let cool completely, then store in an airtight container.

Note: In the heyday of this recipe, solid vegetable shortening meant Crisco, or a similar product. But if you are trying to avoid hydrogenated and trans fats, there are some alternatives, such as Earth Balance Natural Shortening, and Spectrum Organic Shortening. Or, you could use lard or margarine.