A Bronx Tale: The Musical

The opening set of A Bronx Tale is a simple one, sporting a solitary street sign, “Belmont Avenue.”

For most viewing this set, it may just be a street sign, but for me, it conjures up my childhood and the numerous stories my father, who was raised there, regaled the family with. Colorful characters, stores that he frequented every day, and the cohesiveness of the neighborhood were woven into his personal often told tales.

The stores that were on the block, Madonia Bread, Gino’s Pastry, Mike’s Deli and Borgatti Pasta are depicted in another set. If you go to the neighborhood today, those stores are all still there, generations later. At intermission, smitten with seeing replicas of the stores I know so well, I turned to the man seated next to me to tell him this, and he seemed mildly annoyed that I interrupted his relationship with his phone. But no matter, I was reveling in enjoying a Broadway musical, centered around a tiny piece of New York real estate, that was so much a part of my life growing up. And thus, this is fair warning, I am very sentimental about this show and its’ creator Chazz Palminteri, who chronicled his early years as a kid and teenager, navigating the troubled streets of that then usually forgotten borough. 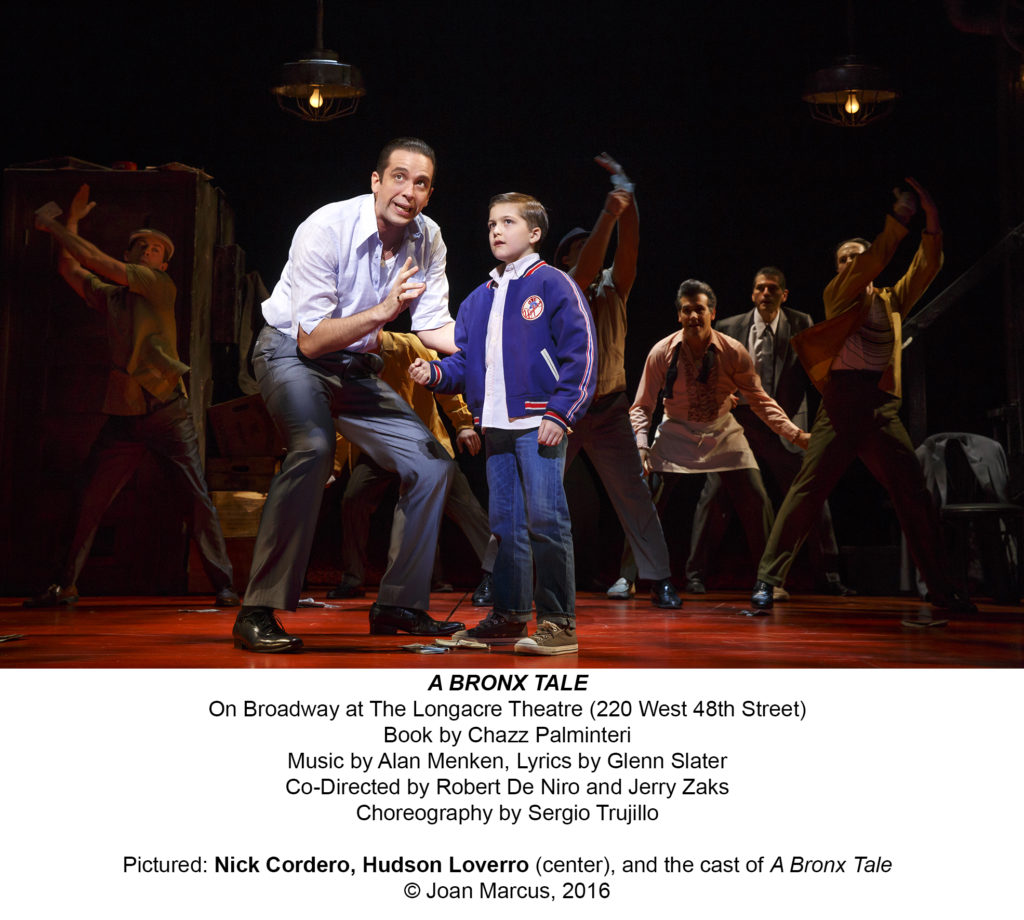 Chazz has done an amazing job with the story, partially based on his life. The central plot revolves around young Calogero, who is conflicted by his warmth and closeness with his father, who wants his son to live a clean life and work on his innate talent, and his attraction to a neighborhood gangster, who demands respect from everyone around him, and shows young “C” the ropes.

Calogero is blinded by the money, status and respect that Sonny, the gangster, can provide.
A secondary plot highlights the divided neighborhood that existed: whites lived on Belmont, blacks on Webster and the inevitable trouble that ensued when people ventured beyond their own neighborhoods.

By now, I am sure you know the story of A Bronx Tale. One that likely so many young men can identify with. Is it better to be loved or feared? Can you really walk away from the temptations of money, when it is procured in nefarious ways? Calogero’s father was a hard working, decent man, a bus driver of little means, but a man with a very large heart.

Sonny, in his way, has heart as well, but his path was one that would lead Calogero down a very dangerous dead end.

The creative team behind A Bronx Tale:The Musical is just astounding: Robert DeNiro and Jerry Zaks co-directors, Alan Menken, music, Glenn Slater, lyrics, with choreography by Sergio Trujillo, scenic design by Beowulf Boritt, costumes by William Ivey Long and lighting by Howell Binkley. I mean, these are all Broadway and entertainment veterans. Oh, and by the way, record executive Tommy Mottola is one of the major producers.

The music is good, with an outstanding song, “One of the Great Ones” my favorite. 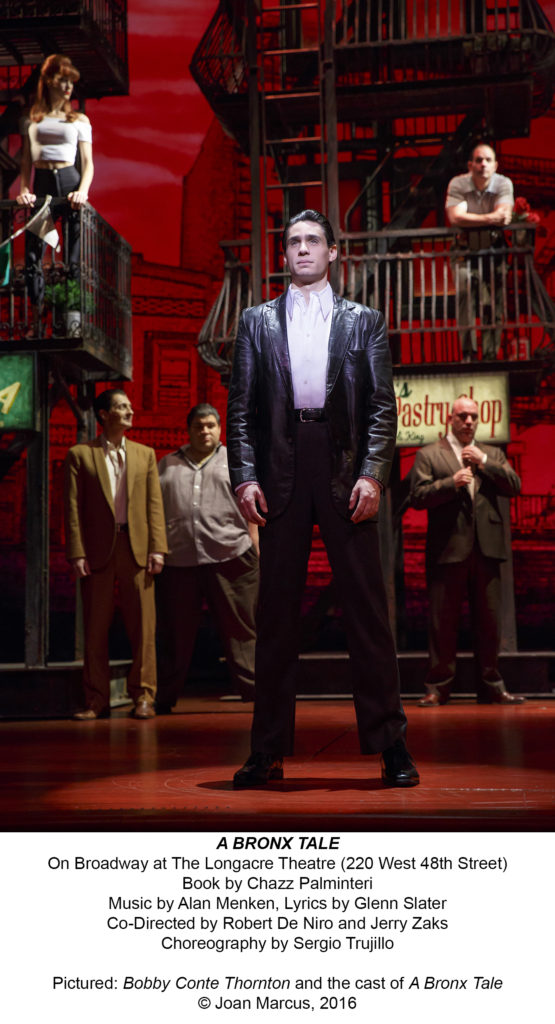 Ultimately, A Bronx Tale is a story about  turning away from greed and control, believing in the power of love, and finding one’s self along the way. And the best part is, that discovery takes place in the borough that  I call, the “real deal.”  The Bronx, NYC. www.abronxtalethemusical.com