Is there a woman who has ever bought a bottle of foundation and felt truly confident that she was buying the right shade for her skin tone?  I know I certainly haven’t.  I’ve bought so many bottles of foundation over the years and I’ve never been truly sure I was buying the right shade.  This is true even when I was advised by a makeup consultant.

So many of my friends and friends of friends have the same problem.  One of the problems is few of us even know what our skin tone is.  A friend and I recently went into a chain drugstore and she decided to buy a new foundation.  It was broken down into fair, olive and dark and further subdivided into pink and orange undertones.  She turned to me and said, “I’m olive, right?”  I replied no, I think you’re fair.”  She disagreed and asked two women who happened to be nearby.  They thought she was neither olive nor fair and suggested a different brand completely.  She finally decided not to buy anything.

A makeup artist once told me that the way to find the most flattering shade of foundation is to use three or four and mix them.  Are you going to spend a half-hour every morning mixing foundations?  Who has the time or talent?

A friend told me this story which I thought was very funny.  She decided to splurge and went to one of the makeup counters at one of the more expensive Fifth Avenue stores.  She asked the consultant at the counter to suggest a foundation for her skin tone.  She spent close to $70 but congratulated herself on the fact that she was finally wearing the right shade.

The following week she decided to go back to the same counter to buy mascara.  This time there was a different consultant. After selling her the mascara, the woman told her, “you really should be wearing different shade of foundation.”  My friend slunk out without buying anything.

I buy my foundation in the nearest drugstore and hope for the best.  At least it’s inexpensive.

Miriam Silverberg is a freelance writer and owner of Miriam Silverberg Associates, a publicity boutique in Manhattan.  She has worked with fashion designers and retailers, beauty industry and the campaigns of Mayors Bloomberg and Giuliani and restaurants, among others. Very stylish, she claims she came out of the womb interested in fashion and her first word was neither mama nor dada, but “Chanel.” She may be reached at silverbergm@mindspring.com 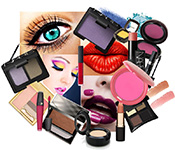 Various experts are here to the rescues – with makeup tips, skincare advice, and help for our hair.