A Paradigm Shift on Broadway

For years, Broadway has been characterized by traditionally crafted musicals, plays that entertain or have deep social messages, or limited runs with major stars, like Liza. But Broadway is undergoing a huge paradigm shift in terms of the kinds of productions that come into the houses, the audiences attending and even the length of the shows.

With that, today’s column features The Encounter and Oh, Hello.

Both are pieces that are completely unique, run for almost two hours, and have no intermission.

The Encounter is unlike anything I have ever seen before on Broadway. Conceived, directed and performed by Simon McBurney, the piece is inspired by the book “Amazon Beaming” by Petru Popescu. It’s an intricately woven story about Loren McIntyre, a National Geographic photographer who got lost among tribesmen in a very remote part of the Amazon. His experience was stunning and life altering, and he encountered life and death challenges.

Now, here is why this is a unique theatrical piece.

The Encounter must be experienced utilizing the headphones that are placed on the back of each seat in the theatre. The play is totally dependent upon the brilliant sound design that has been crafted for this experiential piece.  Now, for me, a person deeply enmeshed in sound as part of my business (as a radio broadcaster and audio producer) that part of the play completely fascinated me. I feel that sound is often overlooked in all the creative arts. I believe it is deemed the step child to the visual so I was very excited to see a full blown aural experience and allow the sound to be the star of the show.

Many people around me, however, were lulled into sleep as they were enveloped by the numerous layers of audio, from narration to sound effects to all the amazing nuances. Lots of nodding heads were seen.

I kept thinking to myself that this would make an excellent podcast due to the complicated audio experience.

As for the solo actor, Simon McBurney, wow. He  performs and responds  to the pre-recorded audio, taking on different characters, speaking into his various microphones.  It is quite a feat to make this truly complicated story compelling and intimate.

By the end of the two hour with no intermission piece, I felt as if I had been tramping through the Amazon as well, exhausted and spent. 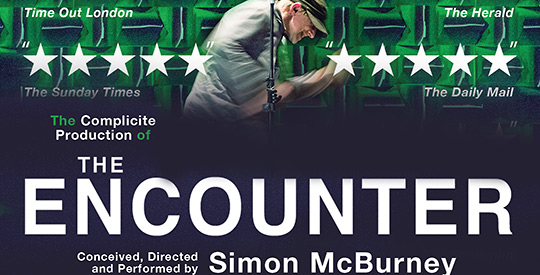 I wondered about the nightmare of working with audio and technical glitches that invariably come up. And then, the logistics of changing the ear pads after each performance. But then, I questioned whether they do, in fact, change them after every performance. If they don’t, now that would be a nightmare.

Well, I am not their audience. It seemed like a cute premise, but I went into the theatre not knowing one blessed thing about the two performers or what their shtick was. Apparently I was in the minority. The audience for Oh, Hello is built in because Nick Kroll and John Mulaney are  comedy club circuit and Comedy Central darlings, and the audience went wild when they stepped on stage. Oh, Hello (something they say alot) is based on two old down and out upper West side buddies that have lived together as roommates for 40 years. Only these two have bad wigs and beards like little kids in a grade school play attempting to be old geezers. And that is completely by design.

I, for one, did not get it. The concept is interesting, but I  felt their performances to be amateurish. The idea is to entertain everyone, not just  the people who know them from their long standing cult comedy shows. Without knowing that background, is there a better way to hook a Oh, Hello novice in?

Sometimes completely politically incorrect and outrageous, other times providing scatological, or creepy humor, the two thirty something actors, badly posing as septuagenarians (which is part of the gag),  do grow on you. There was a  segment where they invited audience guest Willy Geist, (a Today Show host) up for an interview  on their public access television show, “Too Much Tuna” which they film at an ersatz diner. (Enormous tuna sandwiches are an integral element of this play. Just reporting the facts.)

Right there is where the comedy lost steam and energy. It wasn’t a necessary element and it wasn’t that funny. Once that prolonged segment ended, and they improvised with various audience members, the plot continued and the show did seem to improve. 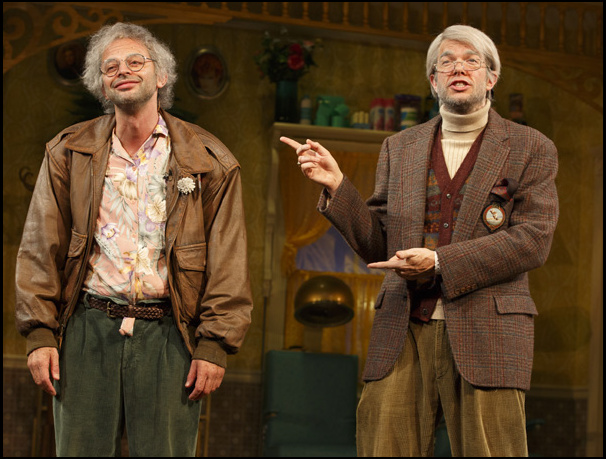 Oh, Hello is truly an insider’s view of theatre and New York City. If you are not from the area, I’m not sure you would appreciate most of the references. By the end of the piece, I warmed up to the duo, and enjoyed their wacky personalities and jokes. But it took me a long time to get there.