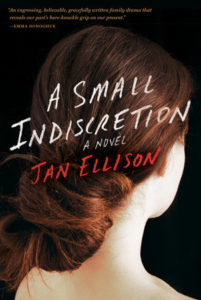 We’ve all enjoyed easy summer reads that entertain, but aren’t always well written. So we love when a writer has a captivating story to tell, and also writes it in a captivating style. In her debut novel, A Small Indiscretion, Jan Ellison has beautifully accomplished both.

The story starts in the present day in San Francisco as the narrator, Annie Black informs us of her son’s accident and her imploding marriage, both of which are connected to a London winter two decades earlier.

At nineteen, Annie Black trades a bleak future in her washed-out hometown for a London winter of drinking to oblivion and yearning for deliverance. Some two decades later, she is married to a good man and settled in San Francisco, with a son and two daughters and a successful career designing artistic interior lights. One June morning, a photograph arrives in her mailbox, igniting an old longing and setting off a chain of events that rock the foundations of her marriage and threaten to overturn her family’s hard-won happiness.

The writer brilliantly moves back and forth in time, peeling the layers of her life with revelations that shock the reader and the narrator.

Author Bio
Jan Ellison is a graduate of Stanford University and San Francisco State University’s MFA Program. She has published award-winning short fiction, and was the recipient of a 2007 O. Henry Prize for her first story to appear in print. Her work has also been shortlisted for The Best American Short Stories and the Pushcart Prize. She lives in Northern California with her husband and their four children. A Small Indiscretion is her first book.

For more information and to order the book visit:  http://www.janellison.com