A Trio of Treats for Halloween 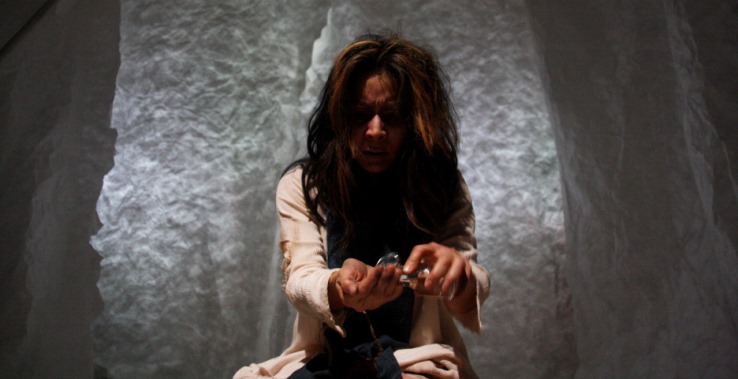 Jolene Kim in The Kaidan Project. Photo by Rebecca Bonebrake

Horror houses are not my thing but I do love a good ghost story. The Kaidan Project: Walls Grow Thin is an immersive theatrical ghost story by Lisa Dring and Chelsea Sutton as artistically beautiful and complex as it is otherworldly. Produced by Rogue Artists Ensemble and East West Players, everything about it is unpredictable, from the way they have transformed the old building in which it is presented to how they have adapted an ancient Japanese form of storytelling and turned it into a fascinating adventure into the unknown. The 75-minute performance involves a missing woman, Kana Mori (Jolene Kim) who materializes once you reach the upper floors. All I can say is get ready to have your mind blown.

The writers have taken a collection of kaidan – stories of the weird, strange and mysterious – and combined them into a single ghost story with each individual tale contributing to the larger narrative. There are small, delicate scenes and big, extravagant ones. Each moves fluidly into the next, and the mechanics of the tricks and illusions are so well hidden the magic is never destroyed by an accidental giveaway. The hyper-theatrical event is staged in the Rogues’ signature style, which integrates a wide variety of performance techniques set to a haunting original score.

Twenty-one actors make up the rotating cast with performances staggered at regular intervals throughout the night. The strongest connection you’ll make, or at least the one you have the most contact with, is Kana. It is a demanding role that requires the actress to be emotionally open and able to turn on a dime. Ms. Kim does that and more, riding the fragile line between truth and madness with agonizing intensity. Three additional actresses, who are no doubt equally as skilled, play Kana at other performances: Tane Kawasaki, Jasmine Orpilla and Randi Tahara. So well-crafted and artistically satisfying is the entire experience that I can’t rave about it enough. Now through November 5th. Ticket Link (https://www.rogueartists.org/kaidan-project) 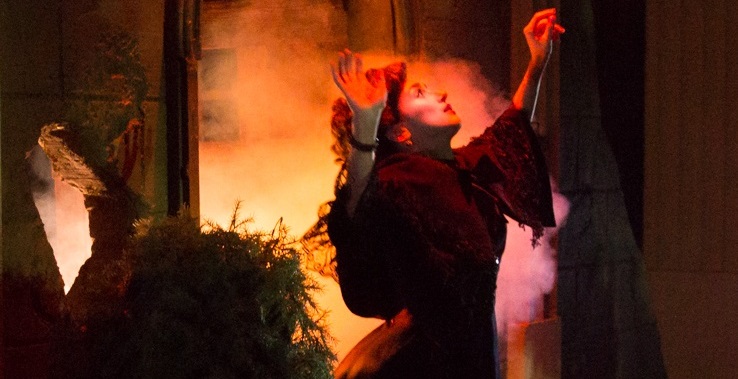 Thousands of souls have their final resting place in Altadena’s Mountain View Mausoleum and Cemetery but, once a year in the fall, the living invade the domain of the dead. That’s when Unbound Productions’ Wicked Lit takes over the grounds and creates a site-specific theatrical experience based on classic and original horror stories unlike any other kind of theatre or Halloween event you’ve ever seen. Decadent entertainment in a drop-dead surreal setting…this year is their best yet.

Three stories are enacted, each in a different part of the grounds. The audience is divided into smaller groups and you’ll see all three plays by the end of the night, but not necessarily in the same order. Thoth’s Labyrinth is loosely based on the Egyptian legend, The Book of Thoth and turns the mausoleum’s darkened hallways into a labyrinth resembling the tunnels of Egypt as its characters search for a legendary book said to give them the power of the gods. It is the first time the mausoleum has been used in this particular way and it is incredibly exciting.

Kirsten Brandt’s adaptation of The Open Door is based on a short story by Margaret Oliphant in which a soldier returns from war to find that his young son has fallen ill. There are rumors of possession and strange reports concerning the nearby ruins, but keep your eye on the Mrs. (Jena Hunt). Staged using multiple levels of the outdoor Pompeian Court, this Victorian ghost story is downright spooky.

The Damned Thing, begins in the chapel and ends in the graveyard. Based on an 1893 Gothic horror story by Ambrose Bierce, it accomplishes something completely unpredictable; true terror in the cemetery. A badly burned corpse, a cryptic journal, and enough “how’d they do that” magic will leave you looking over your shoulder even after the play is done. Hold onto your senses because this one has an extended effect in it that seems impossible to orchestrate and is so otherworldly you can’t believe they actually pulled it off. Translation: it’s really cool. Now through November 11th. Ticket Link (http://unboundproductions.org/)

The third treat is a screening of Tim Burton’s The Nightmare Before Christmas at the legendary El Capitan Theatre in Hollywood that sounds particularly fun. Shown in 3D with special interactive 4D sensory effects like wind, snow, and fog, this marks the 24th year the theatre will celebrate Halloween with Tim Burton’s classic film.

And get this, you have the option of adding a Backstage Tour to your experience that will take you to areas of the theater the public rarely gets to see. Everyone knows theaters have ghosts and on this tour you’ll hear the history of the Ghouls and Haunts of this historic venue, including the origins of The Mighty Wurlitzer Organ. Props and costumes from the film will be on display before and after every screening and you’ll have plenty of photo ops, especially if you come in costume. There are a variety of daytime and evening show times to choose from and this one is great for the whole family. Or you can make it an adult-only night out and have drinks at Hollywood and Highland after the show! Now through Oct. 31 Ticket Link (https://elcapitantheatre.com/)