A Wakeup Call to Marketers and Employers: Do Not Ignore the Over 50 Woman

“Hello World, Can You See Us Now?” 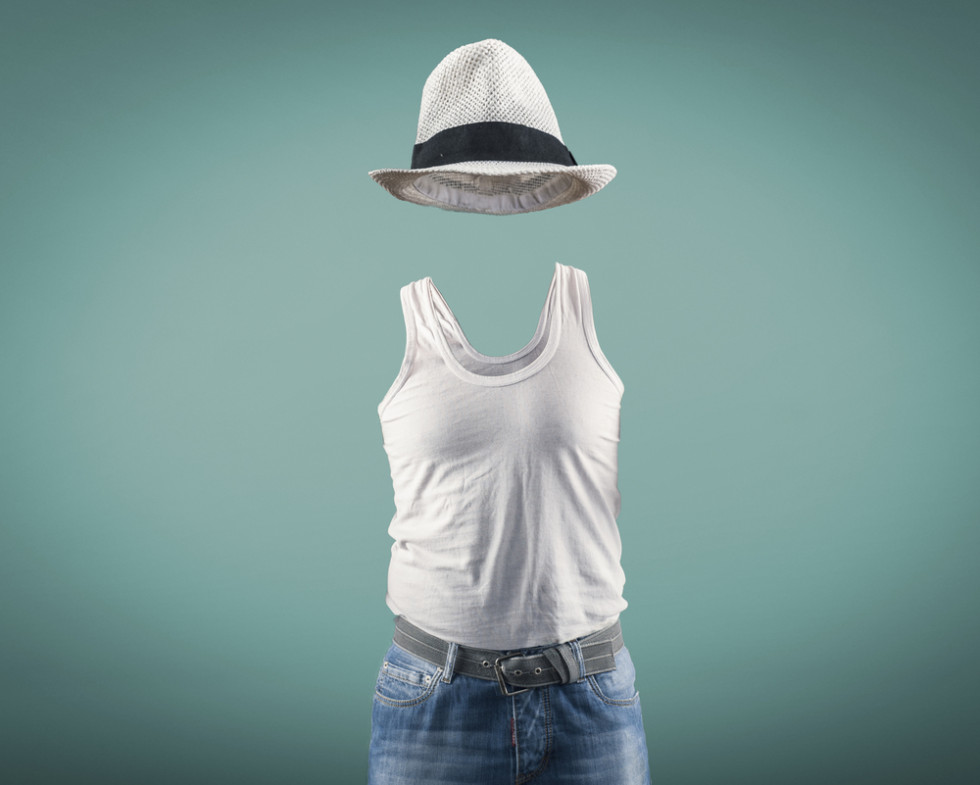 If you’re a woman over fifty, the answer to that question is “not so much.”  And if the world does see us, it usually sees us quite differently than we actually are. While we’ve been drawing attention to the “invisible woman” syndrome for several years now at The Three Tomatoes, and I wrote a novel, “Can You See Us Now?” to bring these issues to light through the main characters, three successful accomplished women who are on top of the world until they turn 50, the good news is the choir singing the refrain, is growing every day. Here are some of the choir soloists, but it needs all of us singing the same refrain to start to make a difference in how older women are perceived in our society.

Marketers Don’t Get Us

Women 50 and older control net worth of $19 trillion and own more than three-fourths of the nation’s financial wealth. – MassMutual Financial Group–2007

Fifty-plus American women are the healthiest, wealthiest and most active generation of women in history. – Demographics by Mark Miller

YET, marketers don’t get us, or worse, simply ignore us.

Women owned New York City creative boutique, Fancy, just released a survey of 500 women over 40 that shows that advertisers really don’t get the over 40 woman, and most are missing the market.  “It’s almost like they’re invisible,” said Katie Keating, Fancy Co-founder. Just look at a couple of these highlights from the survey. 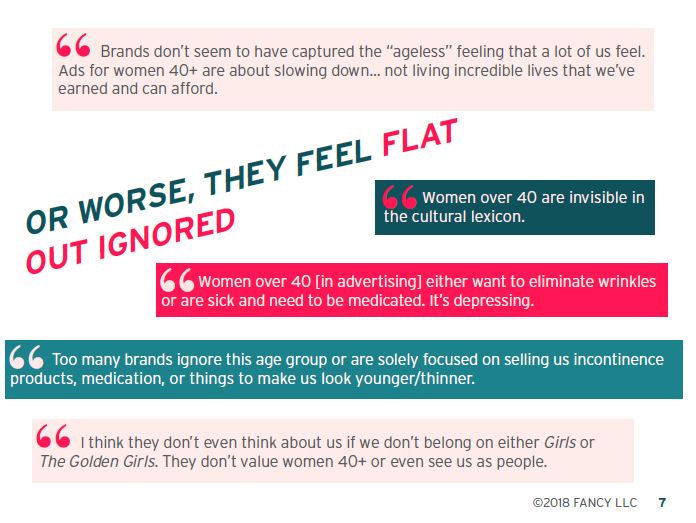 The Fancy Survey captured how women over 40 feel ignored or mispresented by advertisers. (Get the full survey.) 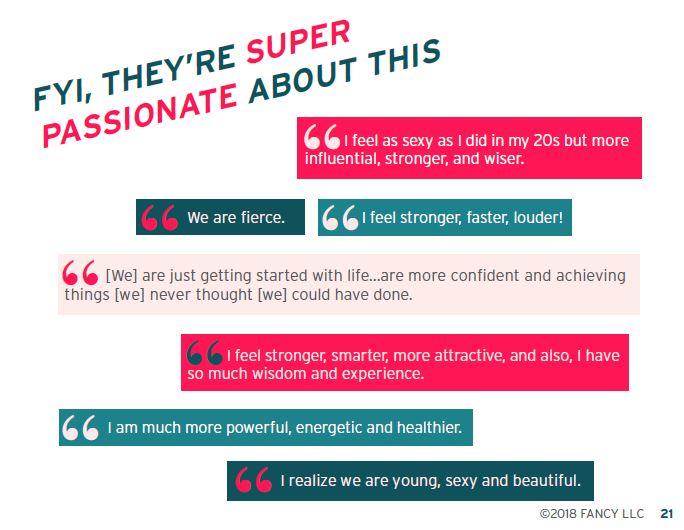 As the Fancy survey shows, women over 40 feel good and positive about themselves. (Download the full survey.)

At a panel discussion at this year’s Women In the World Summit, HBO documentary legend Sheila Nevins said, “The image of aging is based on disability. The woman on the floor who can’t get up, and maybe [there’s] a cream to help them.”

Think about it. When’s the last time you saw an older woman in a car commercial who is not a bystander, but the actual buyer? And what about ads for tech products? And not ads where a 10 year old is showing us how to use our devices. Those are just a couple of categories where we never see ourselves.

Employers Ignore Us Too

Novelist, Allison Pearson, wrote a terrific opinion piece in the New York Post making the case that middle age women with kids make the best employees.  She cites the 56-year old pilot Tammie Jo Shults who landed a Southwest jet in a life-threatening situation.  She is not only a retired Navy pilot, but the mother of two – a combination of experiences that helped her to calmly and safely land that jet.

YET, WHEN IT COMES TO JOBS, OLDER WOMEN ARE THE MOST DISCRIMATED AGAINST.

Ms. Pearson cites research by the National Bureau of Economic Research that found the résumés of older women get fewer callbacks than those of older men and of younger applicants of either sex. “It turns out women after menopause get hit with a double whammy: They suffer from both age and sex discrimination.”

PBS News Hour covered this topic too in an excellent article, “Why Women Over 50 Can’t Get Jobs“.  They say what is surprising when you look at the numbers is that the chances of women getting a job after age 50 are a lot lower than men’s chances of getting a job.

So What’s The Answer?

We Need “Grown-Ass Women” in the Board Rooms 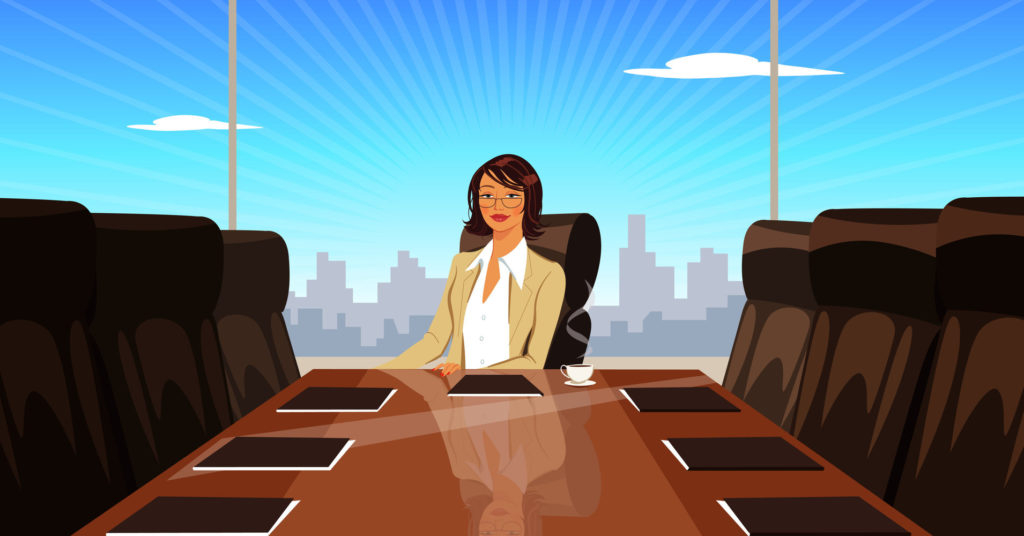 Also on the panel at the Women in the World Summit, was Michaela Angels Davis, activist and writer who identifies  not as “old” but as a “grown-ass woman.” She makes the powerful point that changing the perceptions of older women “is not just who ends up on the magazine covers but who are the decision makers, who’s saying ‘I think that’s what women think.'” She added that they are mostly white men, which makes the case for empowered women in the board room.

So yes, having “grown-ass women” in the board rooms and in the C-suites of giant marketers, Hollywood studios, and corporations everywhere could bring a new optic to how older women are perceived in our society.

We deeply admire Geena Davis and her “See Jane” institute which focuses on giving girls positive images of women and advocates for equal representation of women in media.  As she says, “if they can see us, they can be us.”   Well we also need positive images of older women as we really are, so the world can see us too.

We love that old adage, “success is the best revenge”.  So to my friends and colleagues who happen to be over fifty, let’s keep living our lives to the fullest every day. So attention marketers and employers:  ignore us at your own peril.

Cheryl Benton is the founder and publisher of The Three Tomatoes. She recently published her first novel, “Can You See Us Now