A Walk in the Garden with Lady Carnarvon

Editor’s Note: Now that the movie version of Downton Abbey is out and a huge hit, we thought you’d enjoy revisiting this post from Deb & David White about one of their visits a couple of years ago to Highclere Castle. And here’s another post about Highclere and what you will see if you visit there.

Maybe it was the fullness of autumn, or losing the light too soon on a gorgeous October afternoon beneath those ancient Cedars of Lebanon. It was more than just a feeling.

Highclere Castle is changing. Its Downton Abbey days are now discussed in the past tense, and the updated website features fewer Downton characters. This famous setting for the successful television drama is looking forward to its next chapter. Which is a good thing. Right?

It was the last public visitors day of the season at Highclerere. We were there for a special small group event. David and I had signed up to hear a marvelous young garden historian talk about Capability Brown’s eighteenth century landscape designs for Highclere. But let’s be honest. Like everyone else in the room, we were there because of Downton. Even the historian had her off-topic moment. “I promised to keep my comments about a certain popular television show to a minimum,” she told us with a quick smile, before confessing her infatuation with Cousin Matthew’s dreamy blue eyes.

Following the lecture, Highclere’s head house guide took our group of twelve on a tour of the open rooms in the Castle. Unimpeded by crowds and red ropes, she encouraged us to take our time, admire the art and architecture. And most important, appreciate the stunning views of the countryside from the upstairs windows. We were not disappointed. Highclere’s great hall, the beautiful staircase and balconies are every bit as lovely as Downton Abbey showed us on all those Sunday nights.

We were invited to the café for tea before taking a casual walking tour of the gardens. The afternoon was slipping away along with the warmth of the sun. Only eight of us chose to brave the fall chill for the garden tour led by volunteers from the local village. Five minutes into the walk, we stopped on the lawn under the cedars while the guides provided a history of the trees made famous by Downton Abbey. 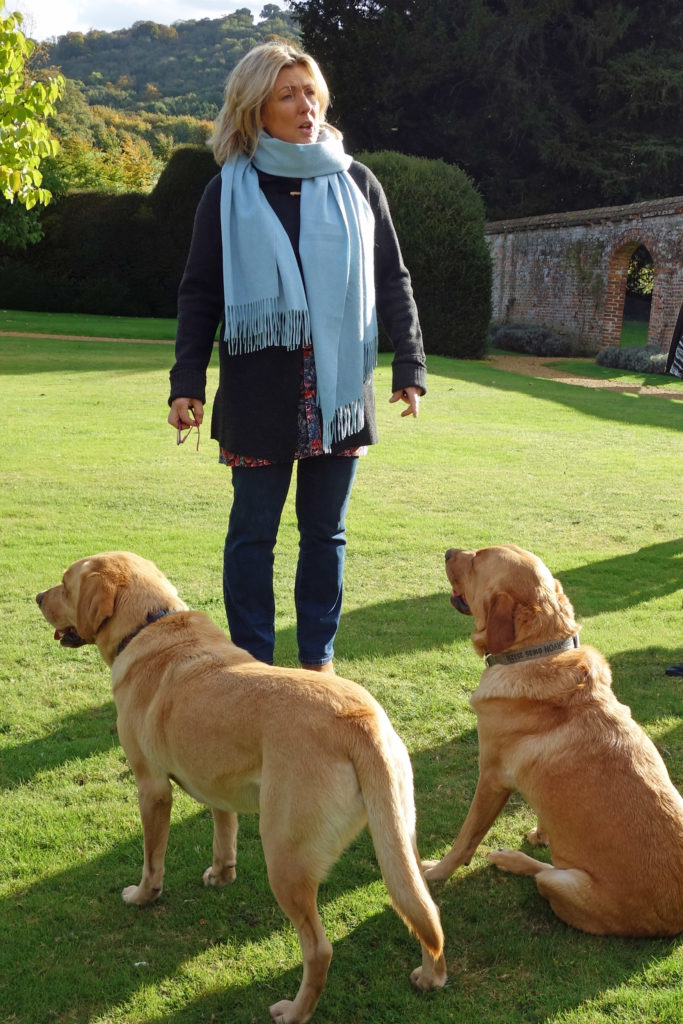 David nudged me. “Look,” he whispered and nodded back toward the great house. Up the slope raced two yellow Labradors and a young spaniel. David bent to greet the dogs, rubbing bellies, scratching ears, just as Lady Carnarvon crested the hill striding towards us. She was dressed in her signature casual wear: jeans, sweater, leather boots, and pale blue Pashmina scarf.

Within minutes her Ladyship had taken over the tour and was leading us off to favorite places in her gardens. Taking up the role of garden guide, Lady Carnarvon shared with us her recent projects and future plans. We stopped near the Monks Garden along a border lined with bags of tulips and rolls of chicken wire. “The tulips are Geordie’s idea,” she said. “My husband loves parrot tulips and bright bold colors in the garden. I prefer soft pastels and blousy blooms. The squirrels enjoy them all.”

After a quick overview of its history, Lady Carnarvon discussed the challenges of maintaining the ancient portions of Highclere’s gardens while developing new features for future generations. Part-time help and volunteers do much of the garden work. But she and her husband both enjoy “putting our hands in the soil.” 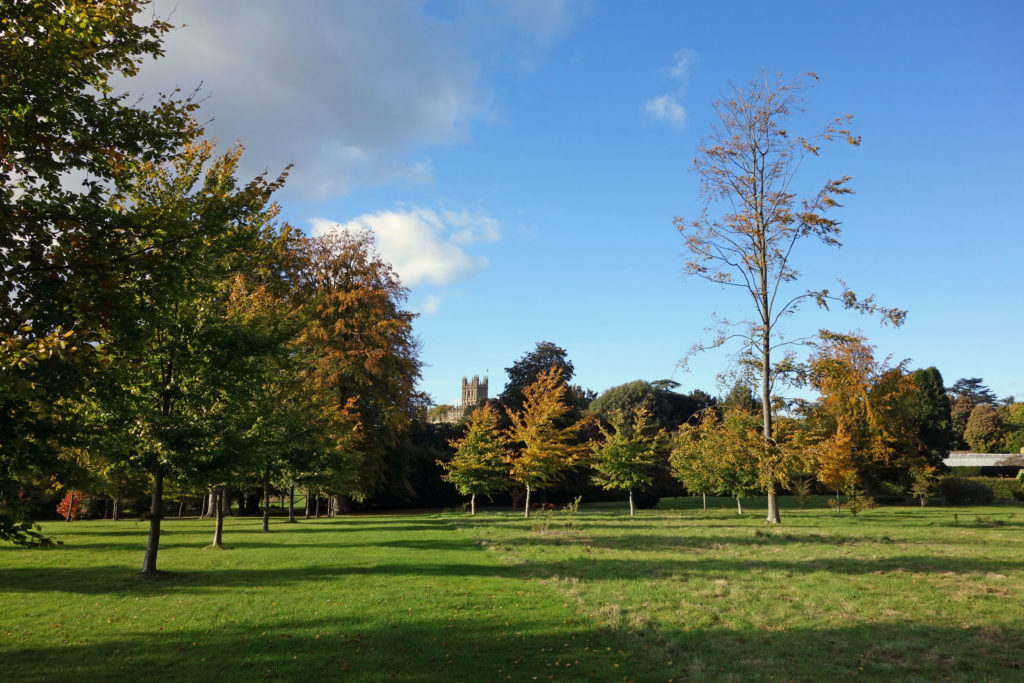 Strolling along a newly established allee of young trees, Lady Carnarvon explained, “I’m encouraging my family to give me trees on my birthdays and holidays instead of things I really don’t need. When I look at these trees, I think of the people who gave them and it makes me feel good.” The Six Sisters Walk is dedicated to her siblings. Other recent projects include a healing herb garden, a rose arbor in memory of her mother, and a garden for her husband’s American grandmother, Catherine.

Our walk with her Ladyship lasted more than an hour as our small group asked about the plantings, the dogs, and her more recent activities. She talked about efforts to support Syrian refugees, and then told us about giving a talk on Highclere’s history to a group of German historians – in their own language. “It took a lot of practice,” she told us. “I could have done it in English, but it was a good challenge.”

Before marrying George Herbert, the 8th Earl of Carnarvon in 1999, Fiona Aitken studied at the University of St. Andrews, and worked as an auditor for Coopers & Lybrand. These days, when she’s not co-managing the Highclere estate with her husband, she’s researching the people and events in Highclere’s past – and writing books about them. Just another indicator of Lady Carnarvon’s work ethic. 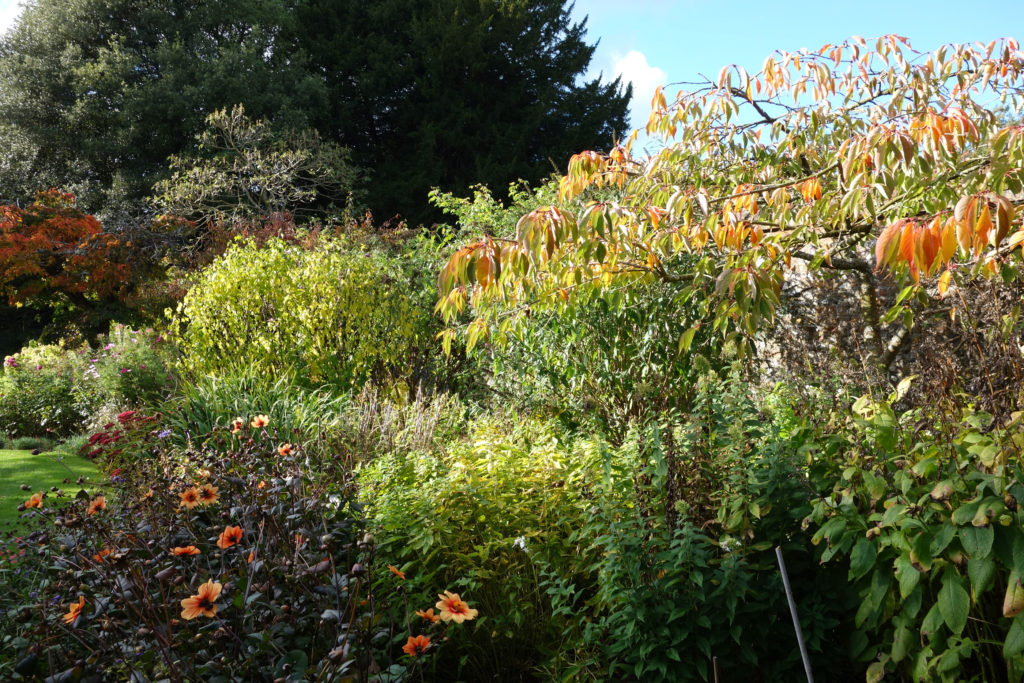 Near the end of the walk, she led us to the edge of a rise overlooking a small valley with wooded hills beyond. “Over there is where we recently found pieces of a World War II plane that went down during a training run from a nearby airfield. We have placed a maker where four young American airmen died.” She has commissioned a life-size statue of a young pilot looking skyward, back over his shoulder, his scarf blowing in the breeze. The statue will be carved from one of the estate’s cedars, brought down in a recent storm.

The dogs roamed in and out of the woods. The young spaniel named Winnie (short for Winston) bounced off into a massive wildflower meadow down below the Castle. “This meadow was planted a few years ago. The Downton film crew always wished it would come into full bloom for some great shots up the hill to the house.” That might have been the only time we heard Lady Carnarvon mention “a certain program” by name. Regarding the rumors of a Downton movie she simply replied, “If it happens, it happens.”

Although the public might choose to linger wistfully in the Downton Abbey era of Highclere, let it be known that Lady Carnarvon is not looking back. There are too many other fascinating stories to share from Highclere’s history.

Lady Carnarvon’s most recent book, At Home at Highclere was published earlier this year.