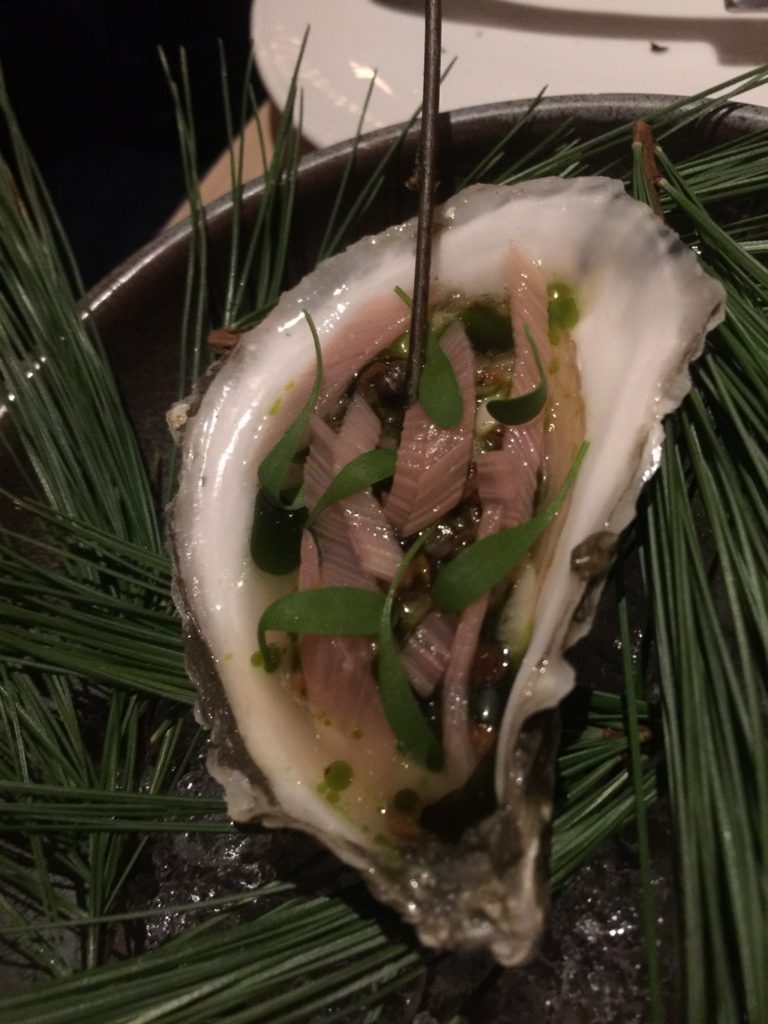 Luscious oyster with pine comes on the “Land + Sea” tasting or by itself in an offering called “snacks.”

Agern, the embassy of a new Danish kingdom, has settled in Grand Central Station. And why not? Isn’t Grand Central the crossroads of the world? I’ve heard that if you stand long enough in the Grand Hall under the constellation of stars you could meet someone and fall in love. Or be saluted by one of the homeless who live there. 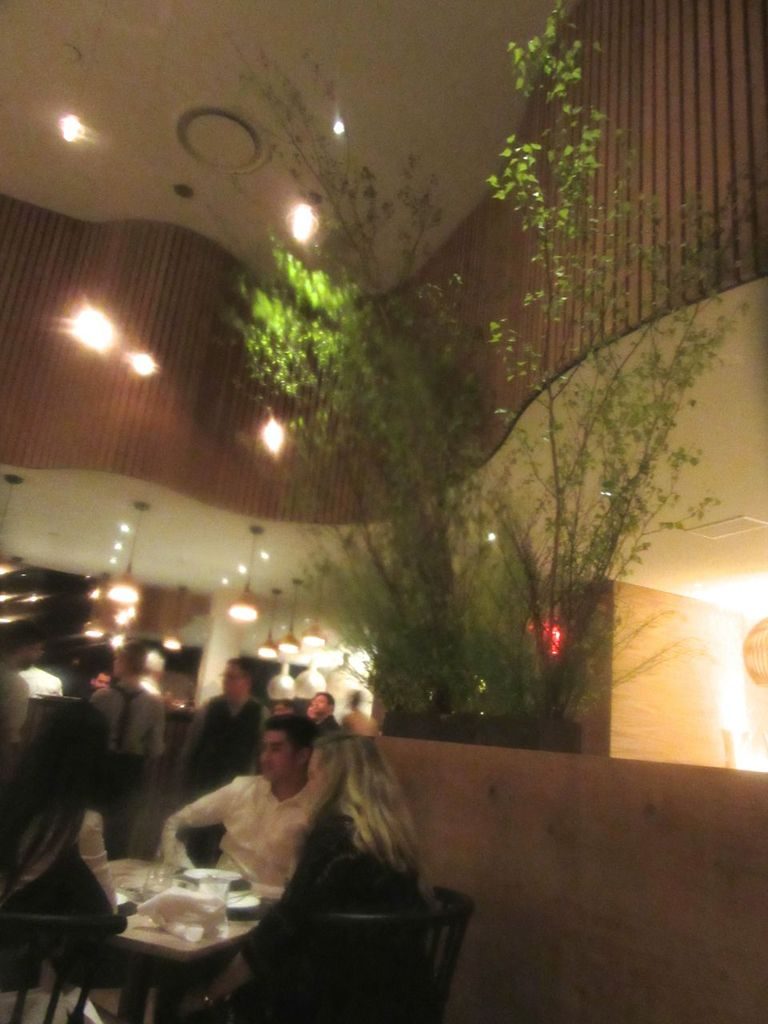 There are 85 seats and a bar under a soaring ceiling with string lights and blooming branches.

I don’t have time to fall in love tonight. Agern is down the ramp and to the right, I’ve been told, a modest sign over the door announcing its presence. I wonder what the steady stream of commuters following their cell phones down the 42nd Street-Vanderbilt ramp make of it? I doubt they even notice as they rush by.

Agern. It means acorn. The acorn was a symbol adopted by the Vanderbilt family in place of a crest. Should I look for an acorn? I’m lost. Two shop clerks just yards away don’t know what I’m talking about. Agern, the new restaurant. But the woman at the cash register in a newsstand directs me.

Of course, you want to come. Especially if you never got to Noma while it was the number one restaurant in the world. And even if you did. This venture is from Noma’s co-founder Claus Meyer, and Icelandic chef Gunnar Gíslason from Dill in Reykjavik, pointedly working with local farmers and foragers. Yes, some dishes are weird, but some are wonderful. 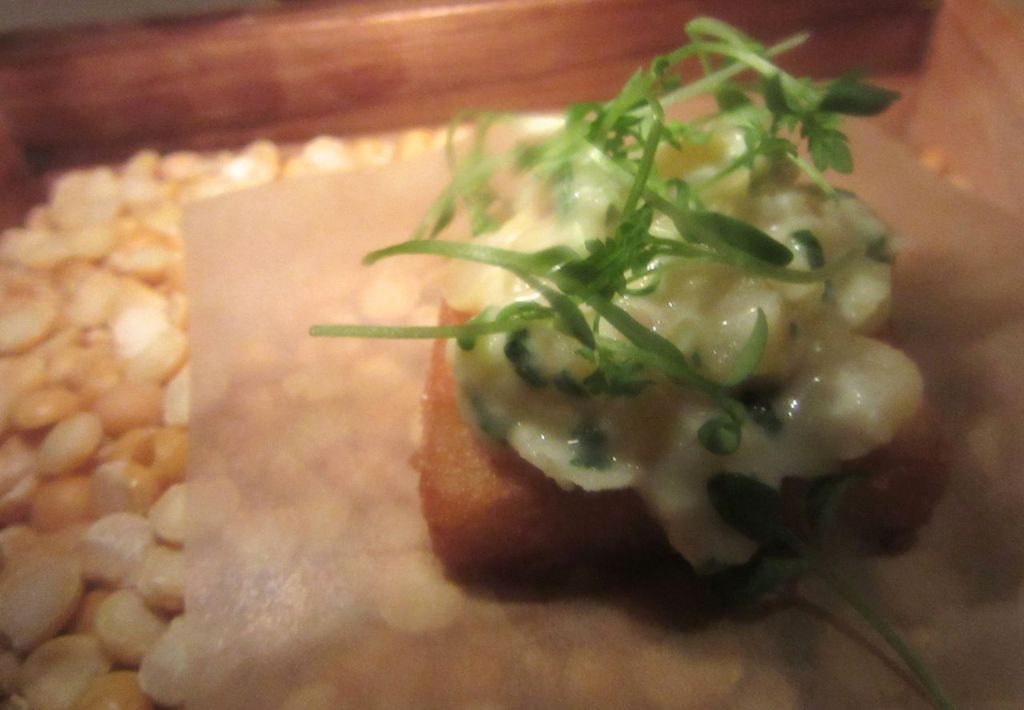 The two tasting menus each start with 6 amuses. Split pea tofu with daikon is on the vegetarian list.

You might want the $145 “Field + Forest” tasting menu or the $120 vegetarian version if you can afford them. With a cod entrée at $38 and lamb $58 à la carte, it’s actually cheaper to do a tasting. If you’re at the bottom of the 99 percent, you might settle for a hot dog at the Danish Dogs next door. The “Great Dane” with beef and pork, spiced ketchup, remoulade, mustard, pickled cucumber, onion and crispy shallots is just $7.62. 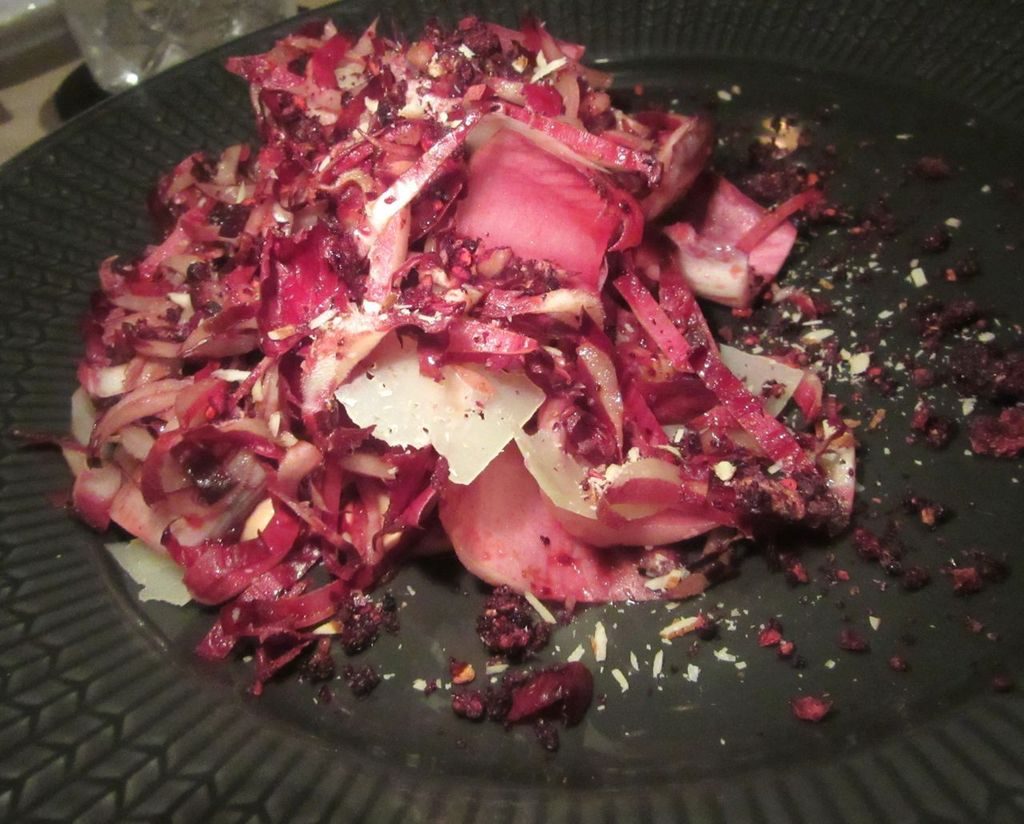 “Bitter Salad” turns out to be endive with preserved blackberry, almonds and havgus cheese.

I’m not sure how it evolved, but I joined friends with connections during an uncrowded evening, pre-opening. I found the Scandinavian beigeness not at all surprising (the bare blond wood tabletop, the chevrons sparsely applied to columns). Very clean. Prices struck all of us as arctic, though with my flashlight I discover the legend at the bottom of the menu indicating prices “are inclusive of service” and additional tips will be “kindly declined.”

At first, we’re annoyed by the listings. “Bitter Salad?” “Beef Heart?” “Baked Beet Root?” How to order? What to order? A couple of vodkas, a duo of $18 Vanderbilt cocktails and some patient coaching from manager Katie Bell helps lift our congenital paranoia.

Reassuringly, the bread looks like bread and tastes like bread: so delicious, warm and already cut into quarters in its earthenware baking dish. “Just baked,” we are told. Piled on a chunk of black stone, the craggy hill of butter — whipped with buttermilk and cider vinegar powder — is remarkable, too. 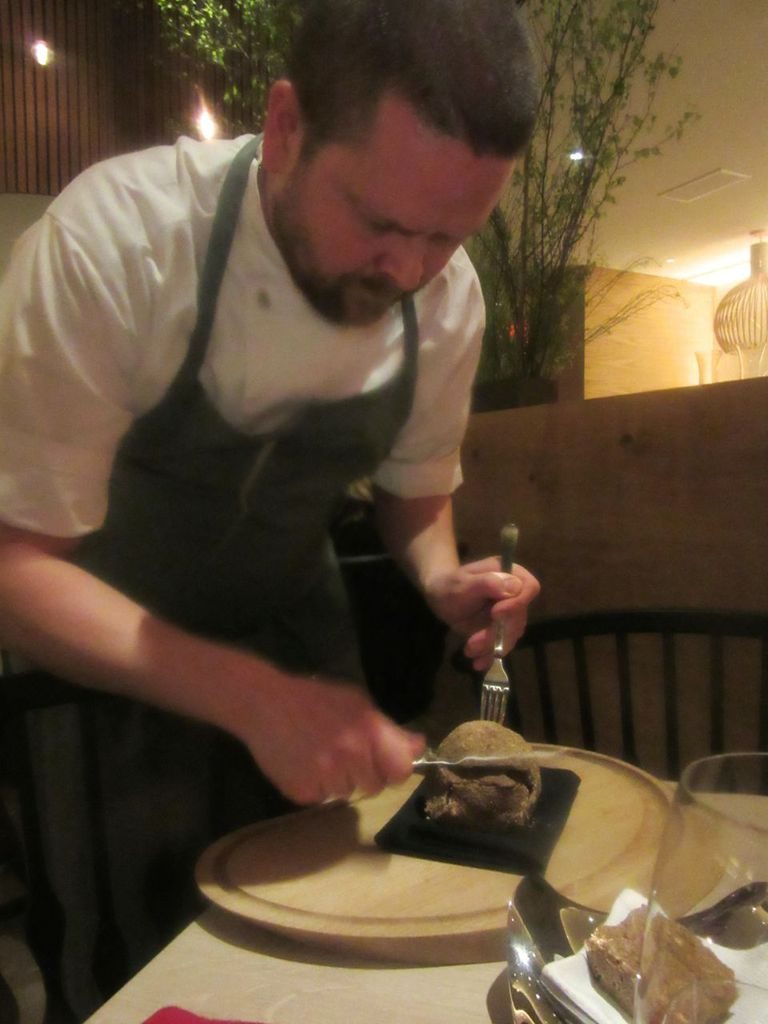 The “snacks” under “To Start” are also a bit weird, except for the luscious oyster and pine. The fluke sashimi with horseradish, celtuce (stem lettuce) and dashi is thrillingly fresh. Executive Chef Gunnar Gíslason cuts open the salt crust of the “beet root” tableside, and it reappears from the kitchen in a dramatic arrangement of beet three ways with crème fraîche and huckleberries. 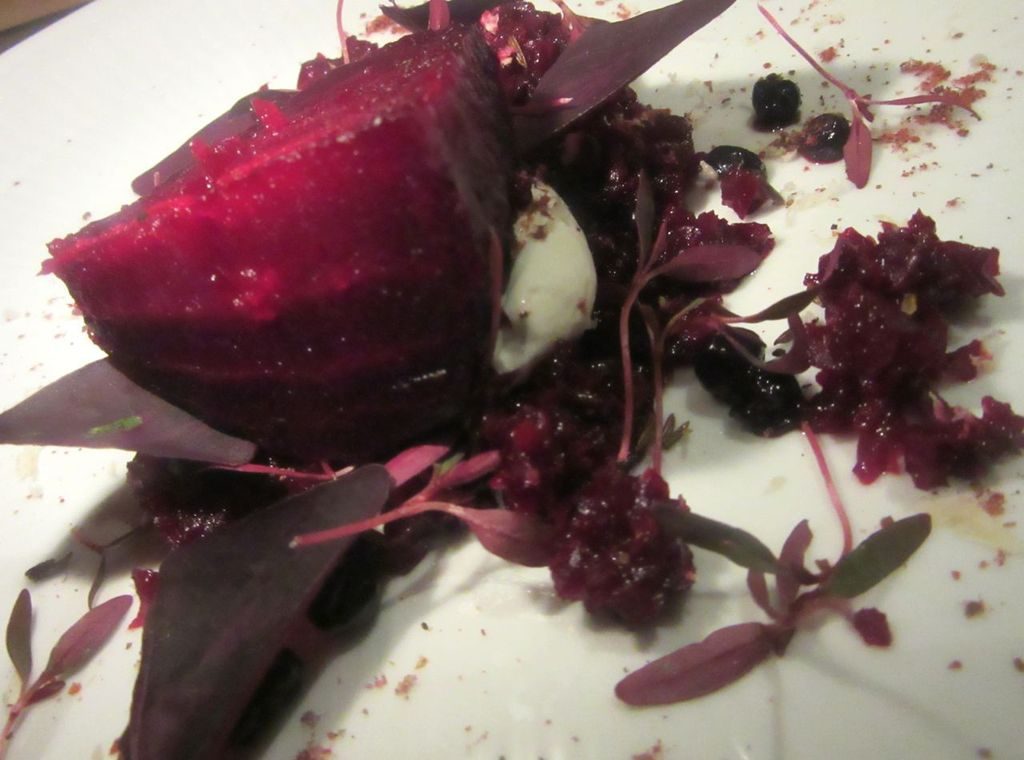 That first night, the salt-baked beet with horseradish, crème fraîche and huckleberries looked like this.

A generous toss of “Bitter Salad” — endive with preserved blackberry, almonds and havgus cheese — is more abundant, good enough but not especially compelling. All of us are quite taken with the exquisite mounting of cod with fennel and potatoes three ways — slices, silken purée, and fried chips.

The fish is a cut above the “Twenty-Four Day Hung Grass-fed Beef” we share, though the accompanying bowl of morels, ramps, onion shoots and favas is a thrill of spring. When that quickly disappears, a second portion arrives. “Do you think we should tell them what “hung” means?” one of my pals asks. 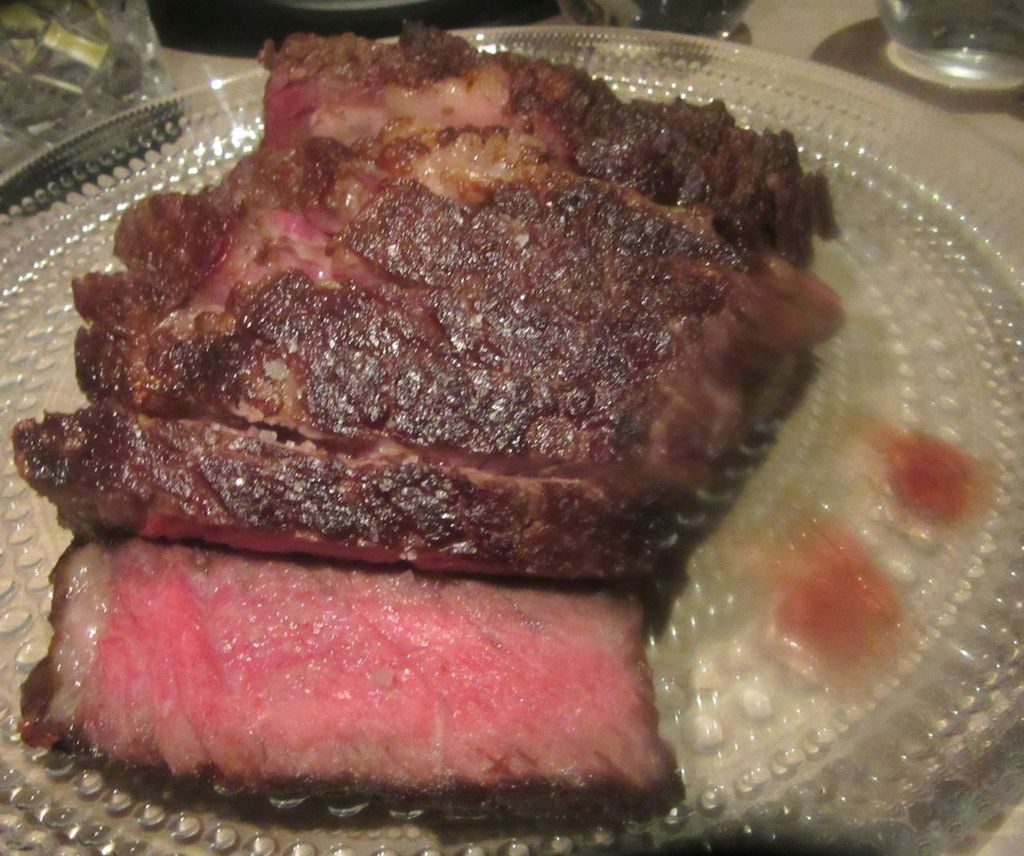 The 24 day “hung” grass fed steak with bowls of spring vegetables was $98 on the opening menu.

I can’t say I’m seduced by desserts like sorrel with knotweed and puffed buckwheat, or the frozen pine soufflé with skyr (Icelandic skim milk yogurt) granita, and pine nuts from the “After Dinner” menu, just because they’re edible.  Even so, the number of other surprising pleasures make me want to come back and taste more.

My friend Wilfred is always game for omakase, no matter how costly, and he is curious to try Agern’s tastings. I book for us two weeks later. He chooses the $145 “Land + Sea,” seven courses following a staccato of six small amuses. We agree we’ll taste and trade with my vegetarian $120 “Field + Forest” lineup.

Well, it feels like a great idea at the time, but even at a commendably brisk speed of delivery, dinner with its mix of triumphs, pleasantries and so-whats seems to take forever. By the time Wilfred’s fine cod arrives and I’m sampling my delicious fried barley porridge cakes with smoked cheese and knobs of rutabaga, I’m getting antsy. 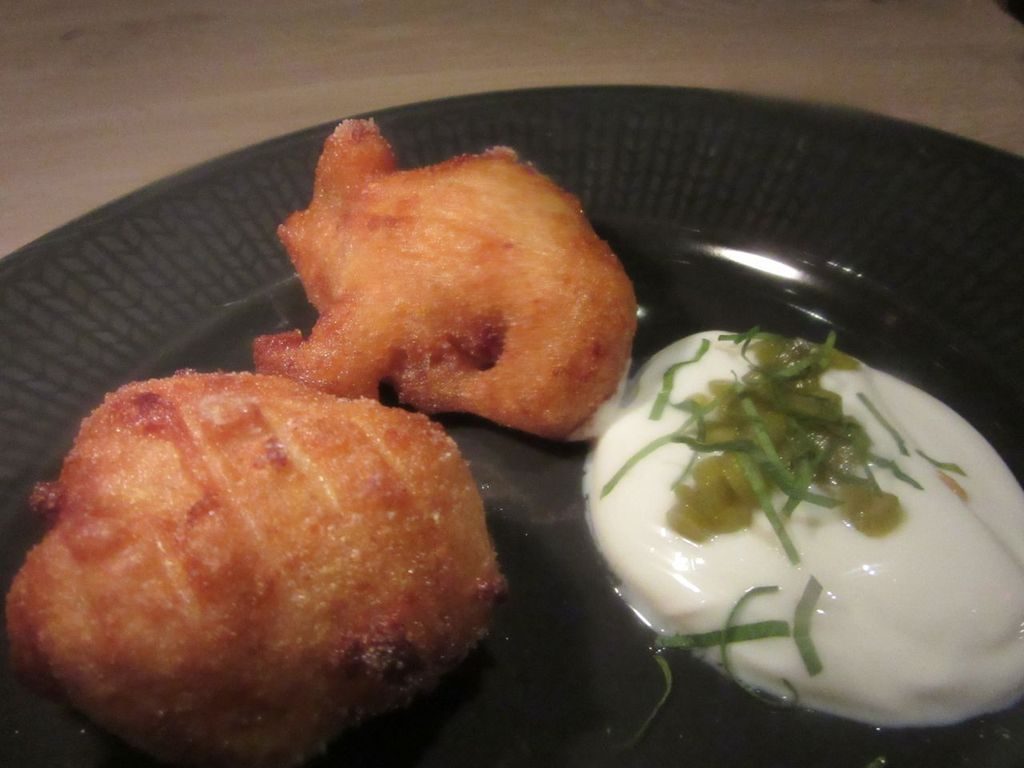 A puff of potato fry bread with lovage is also among the amuses.

I can hang my arm up high along the top of my swivel chair, but I’m longing for real arm rests. Our two tastings feature the just-baked bread and intoxicating butter again, but also potato fry bread and later, two small rye loaves — chewy, intensely flavorful but not quite baked enough. I finish mine anyway.
As soon as the waiter said “beef heart,” my friend Wilfred lost his interest in perfectly okay dish.

Wilfred is turned off by beef heart, even chopped and fairly innocuous, with green garlic, asparagus, and green strawberry. I find it an okay inbetween myself. (The unripe berry is prized for its “fantastic, grassy, bright flavor,” Katie Bell tells me later.) 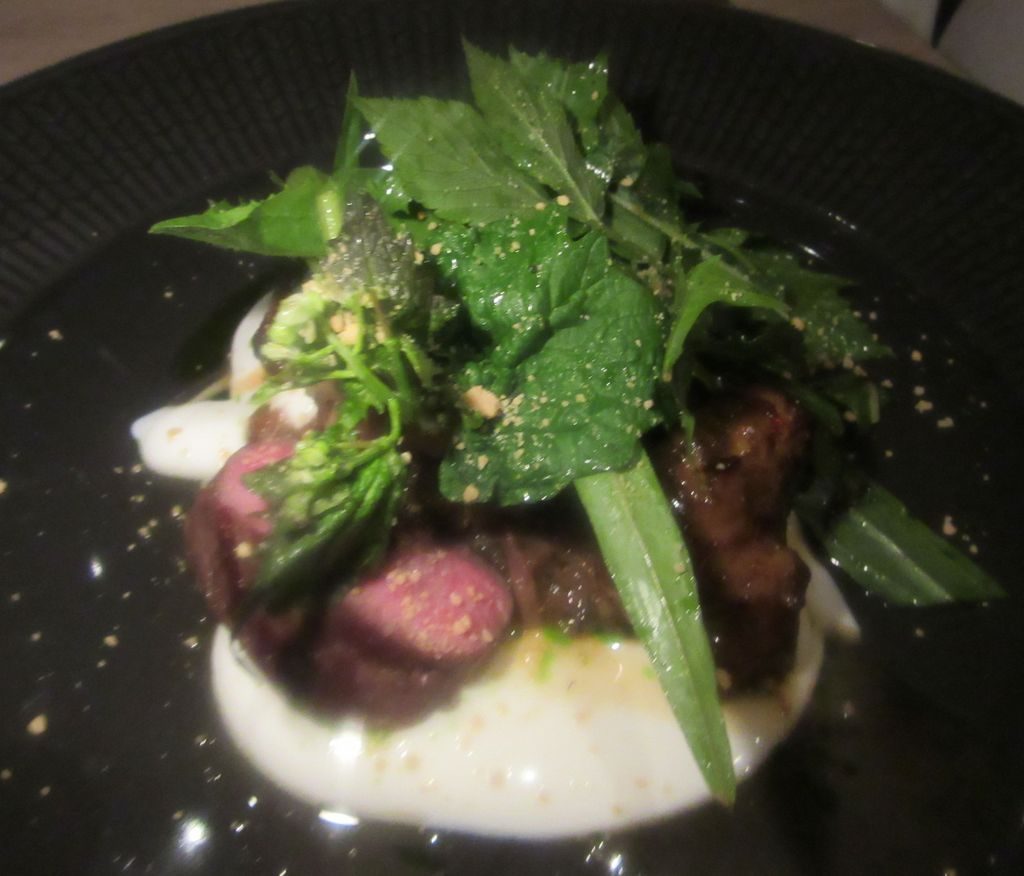 Lamb, roasted and braised, comes with sunchokes, dill and dandelions on the “Land + Sea” tasting.

My companion likes his roasted and braised lamb with sunchokes under a hedge of dandelion. I’d rather have a rare, sautéed lamb chop myself. The parsley root mousse with parsley sorbet is more fun to photograph than to eat.

Did I say the service is smart? Rotating waiters in aprons or vest, bussers, chef Joseph Yardley himself (formerly at Acme) delivering a dish, look like a team that has been functioning for months and not just eight days. Wilfred asks our notably able waiter where he worked before. He confides that he left Blue Hill Farm upstate for this job. “What persuaded you to do that?” Wilfred wants to know.

“I wanted to work for the man who helped create the number one restaurant in the world,” he says. He also cites Agern’s generous Danish benefits. (Extensive maternity and paternity leaves, health care, 401(k) matching, paid sick days, life insurance, and two days off a year to do volunteer work for every full-time employee.) 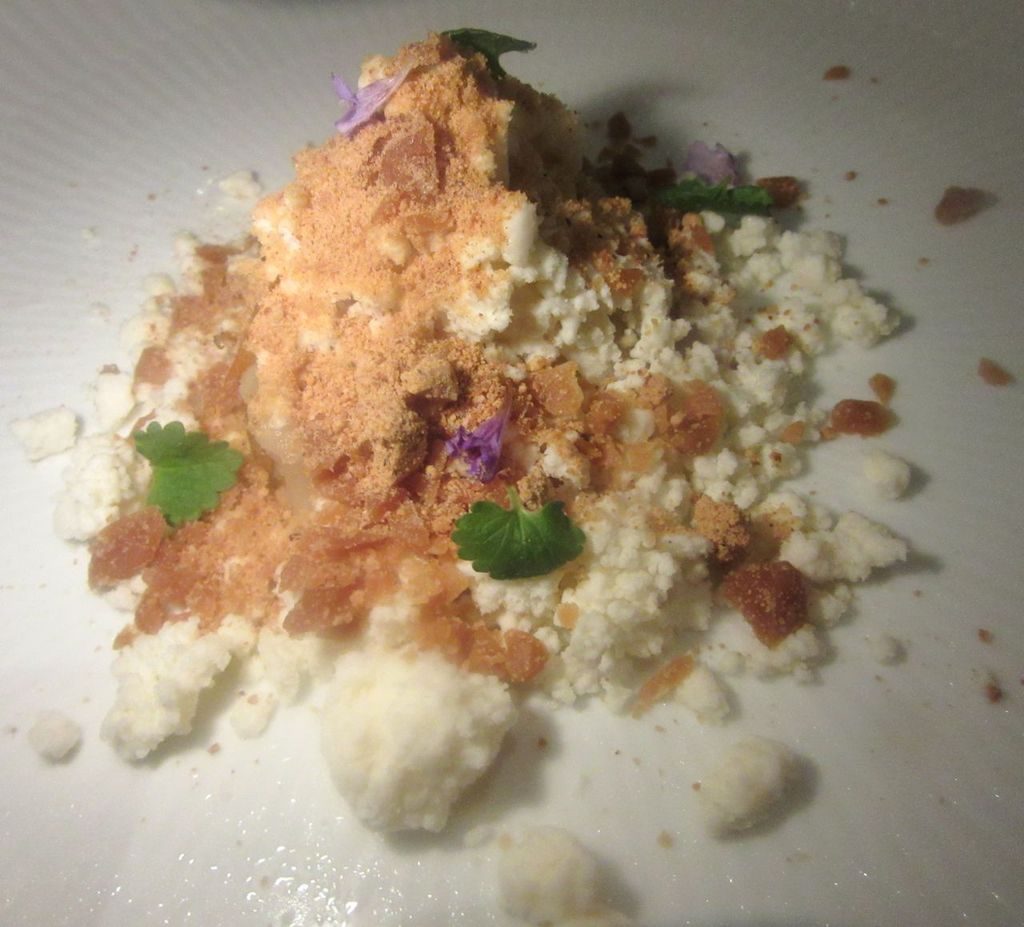 There’s ground ivy as well as caramel and Bosc pear sorbet in the goat’s milk dessert.

I’ve eaten too much and can’t do justice to the mignardises, except for a bite of the dried beet dredged in sumac. No caramel with seaweed. Not even a nibble of chocolate truffle with peanut-shell-infused ganache coated in peanut meringue cookie.

Our bill with one cocktail and two glasses of the cheapest red, a pleasantly fruity $17 Macari from Long Island, totals $345 — no tipping allowed. If I come back, I’ll order what I liked: the snacks, the scallops, the beet root and the cod, maybe the goat’s milk with ground ivy, caramel and Bosc pear sorbet. 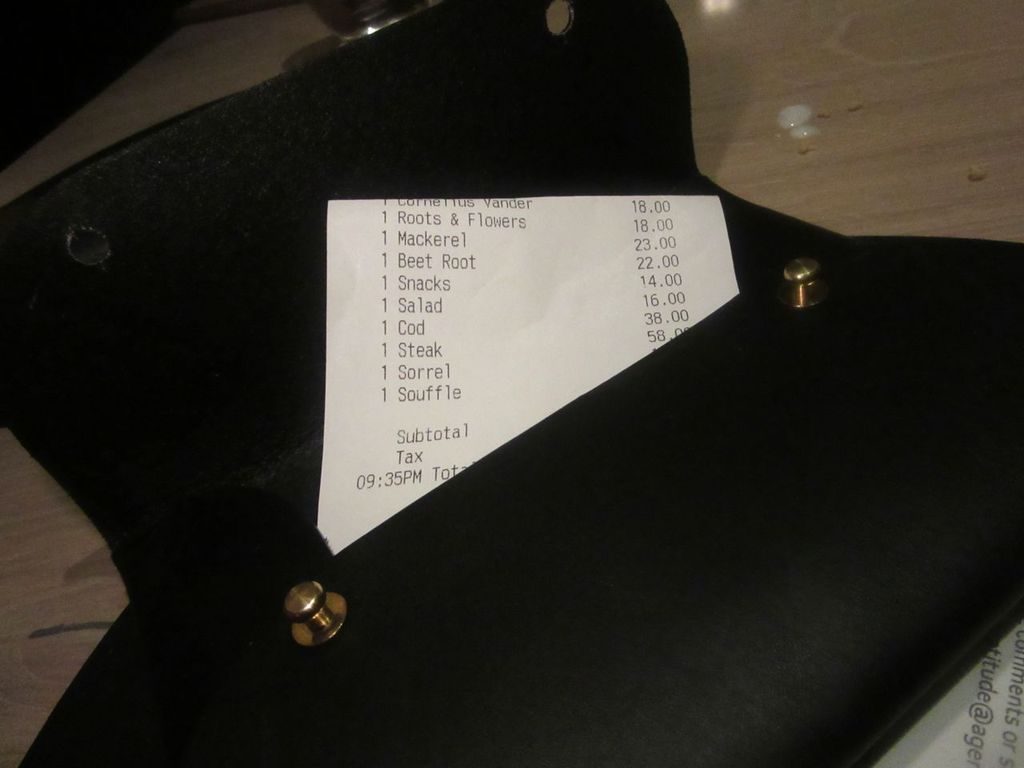 At the end, I would be willing to pay a porter to trundle me up the ramp and out onto 42ndStreet. Wilfred is fixing to call Uber as we hit the sidewalk, but then I spot a policeman, or maybe a security guard, directing a line of waiting taxis.