Alanis Morissette’s Jagged Little Pill is triumphant in its return to the stage. 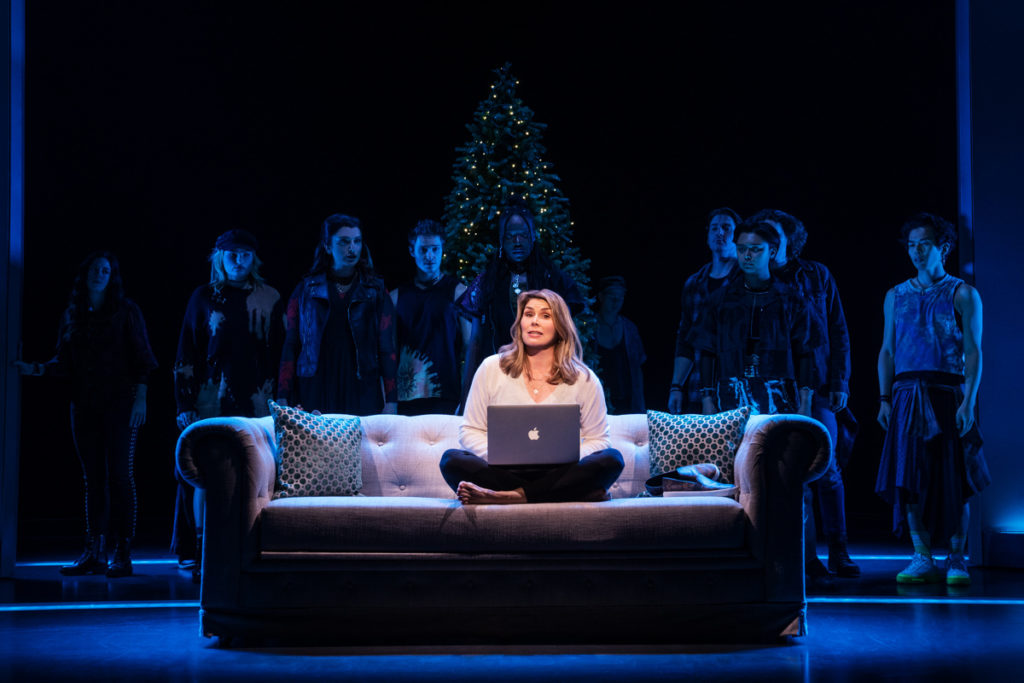 Although I had seen this musical BP (before pandemic) I was curious to revisit it to see how it may have changed with two new principal cast members.

We know the score well, as Alanis’s music remains embedded in our minds, since so many of her songs dominated radio in the not too far away past.

Jagged Little Pill works. The story is clever and timely. It begins with a Connecticut mom and her perfect family writing their yearly Christmas letter. (Groan) I know…what a premise for a musical, but once again, as I said, it works.

The adorable Healy family appears at first in a count-your-blessings perfect kind of way. Mary Jane, the mom seated cross legged in her living room with her Apple laptop, composes an end of year holiday email filled with instances that illustrate their perfection.

Of course, this family is far from perfect. In fact, they are hiding some secrets that would shake up their flawless Connecticut circle of friends.

So often, I have written that I wish a play or musical would have been cut by 15 minutes.  Not so with this one, which clocks in at 2 and a half hours. Jagged Little Pill holds your attention. It’s all about the story, isn’t it? With book by Tony winner Diablo Cody, the show is well crafted and beautifully directed by Diane Paulus.

Mary Jane, the main character, is harboring a few deep secrets and does everything possible to maintain the image of family perfection. Newly cast Heidi Blickenstaff knocks it out of the park, with her fabulous wry humor, nuanced emotions, and beautiful voice. Elizabeth Stanley, who originated the role, is out on maternity leave.

Another principal cast change is that of Frankie, the black adopted daughter of the family, who is going through an identity crisis as well as typical teenage angst. Morgan Dudley is now in the role, originated by Celia Rose Gooding (the daughter of Broadway veteran LaChanze.)

Husband Steve Healy, beautifully performed and sung by Sean Allen Krill, is longing for a loving and physical relationship with his wife. We truly feel his pain.

Lauren Patten plays the role of Jo, who is hopelessly in love with Frankie. Patten lights up the stage with her stellar performance and incredible voice. Lauren won the Tony during the odd hybrid concert/Tony Awards that took place this past September.

Derek Klena is perfectly cast as Nick, the handsome, brilliant, athletic Healy son who gets into Harvard (but of course), however his world changes drastically when he attends a party.

Bella, a friend of Nick’s, is played by Kathryn Gallagher (Peter Gallagher’s daughter) and gives an excellent performance as an at first happy teen who becomes devastated after a horrific incident at that party.

The musical really rests on the tone set by mom Mary Jane, who relates an emotional, poignant, important, and often funny story.  With in your face, defiant choreography, by Sidi Larbi Cherkaqui, and a rocking band, this musical delivers with excellent performances by the entire cast.

Jagged Little Pill hits all the right notes in terms of story line, depth of character and execution of the production.

Now playing at the Broadhurst.   https://jaggedlittlepill.com/