It’s impossible not to be affected by the deification of David Chang if you hang out on the Internet, exposed to the daily chanting of food world monks, as I do.  Even when Chang just stuffs fried chicken in a bun and sells them in a closet, you’d think it was the second (or is it the third?) coming, from the besotted coverage. 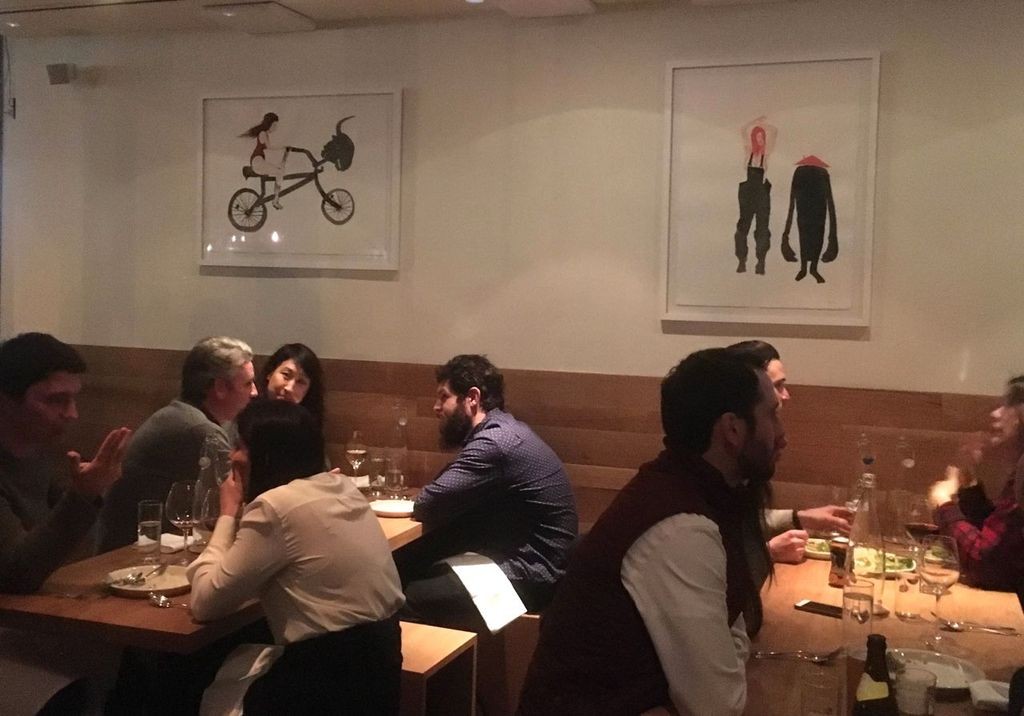 Many of my readers are more likely Boulud fans or Kellerophiles or beamed onto Michael White. Maybe they  don’t give a whit about David Who. But I’ll assume, like me, that some of my loyal followers do. Even so, I was not about to stand in line for three hours waiting to check out his latest: Momofuku Nishi. 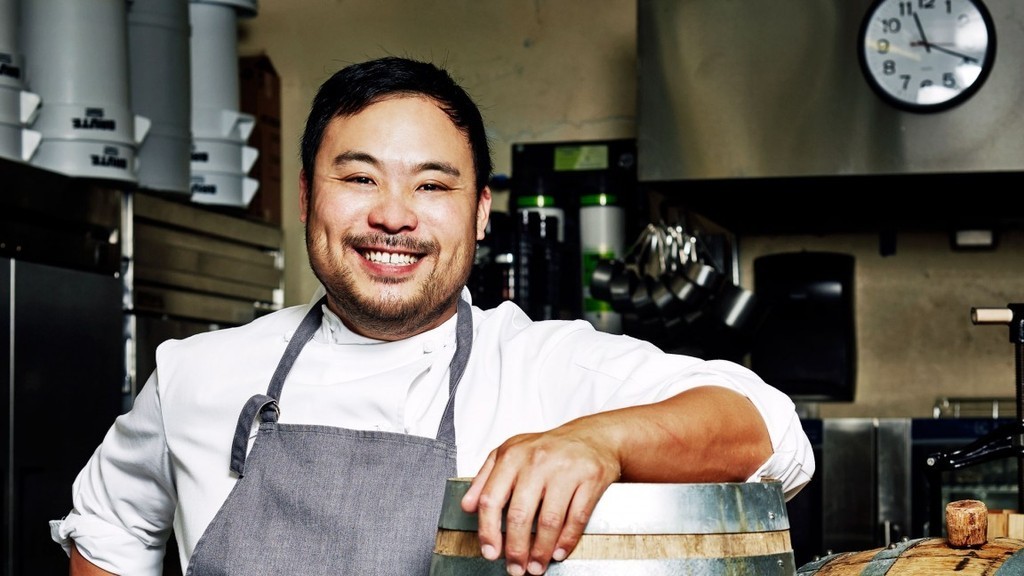 I’ve never seen Chef David Chang smile, but it looks like sometimes he does.

Nishi, offspring of the grownup Chang, had been fully analyzed and probed on Grub Street and Eater. “Nishi is what Noodle Bar would be if I opened it up as a 38-year-old, not a 26-year-old,” Chang told Lucky Peach, his quarterly magazine, in its weekly newsletter.

It would be an unlikely Italian-Korean mashup, “with meats inspired by Chinatown and desserts inspired by our Moms.” From the name Nishi, I would have guessed Japanese. But no. In Eater’s “Eight Facts to Know About Nishi” by Greg Morabito, I learned: “We called it Nishi for West, because it was west of wherever we fucking were.”

Even Eater was gobsmacked when the place actually opened early a few weeks ago, with fans lined up around the block to get into this anonymous storefront where only a small peach marks the spot. Walk-ins only. Who could I call to hold a table for me in this instant slam?  Rather than wait months, I’d give up my need to be anonymous. I found Sara. “When would you like to come?” she asked. 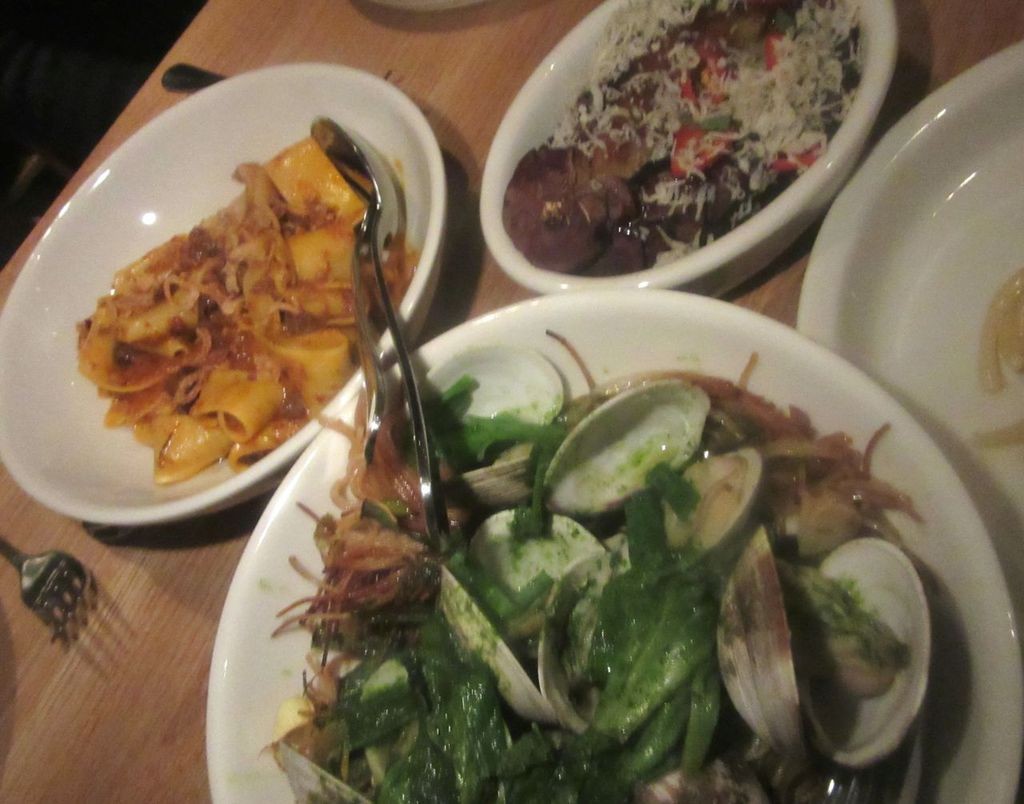 A duo of pastas: spicy beef Sichuan on left, clams Grand Lisboa and crispy sweet potato at the top.

Our foursome huddles next to the entrance as the cluster ahead of us is led away. Amazingly, there’s a coat check. The place is very beige and vanilla with drawings on the far wall. Sara gives us a choice of seats in the chilly entry way, low, backless blocks at a communal table, or a tall four-top against the wall, also with backless stools. Nicely sheltered, I decide. I’m not nuts about tall, but like that wall. 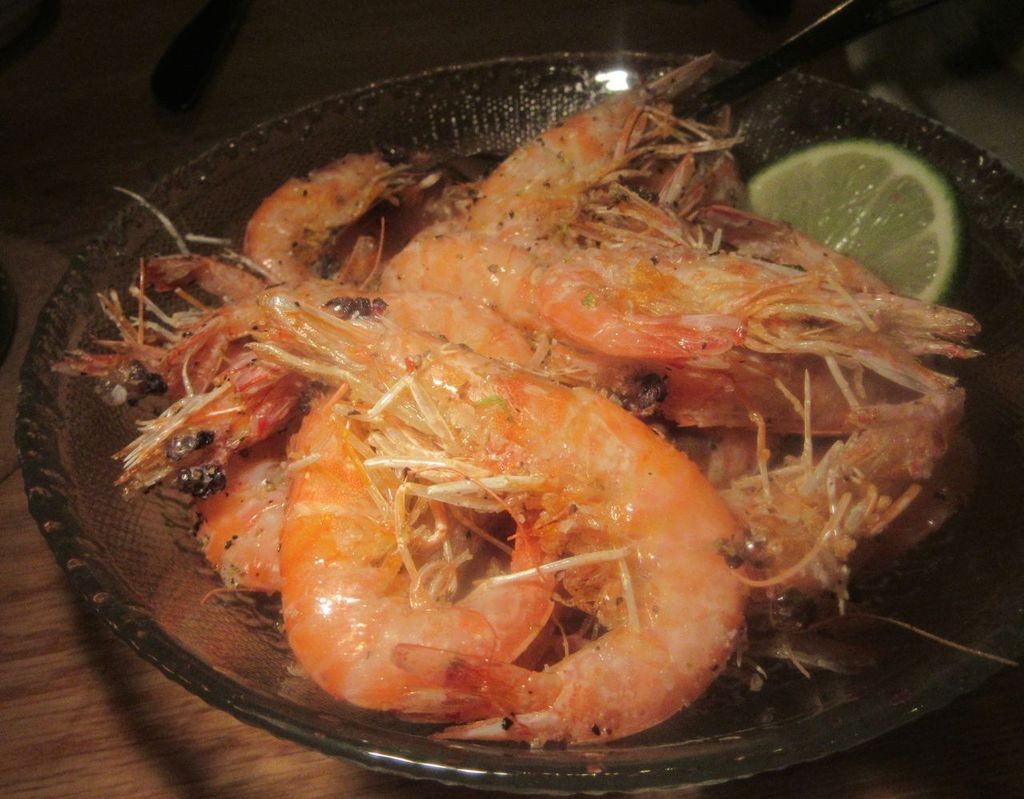 Fried whole shrimp in the shell are meant to eat with both heads and tails.

I’ve had a roller coaster history keeping up with David Chang. Some out-of-town food world professionals persuaded me to queue up with them for pork belly buns and ramen soup lunch atMomofuko Noodle Bar in the East Village. I dawdled with pals for 45 minutes before landing the torturous wooden block at Saam Bar and was never tempted to return.

I scored a seat for the $85 omakase at Momofuko Ko on CraigsList and starred in a headline-making hullabaloo. “Uneven brilliance at high-handed forkplay,” I wrote. Click here to read Oh Dad, Poor Dad, Momo’s in the Closet and I’m Feeling So Sad.

When that narrow counter with its two Michelin stars moved to a grand expansive space on a street I’d never heard of off the Bowery, I was grateful that my friend Wilfred had the perseverance to hit his redial morning after morning at the required moment, weeks ahead, to finally score our reservation for the $175 tasting. Click here to read Momofuku Kopacetic. 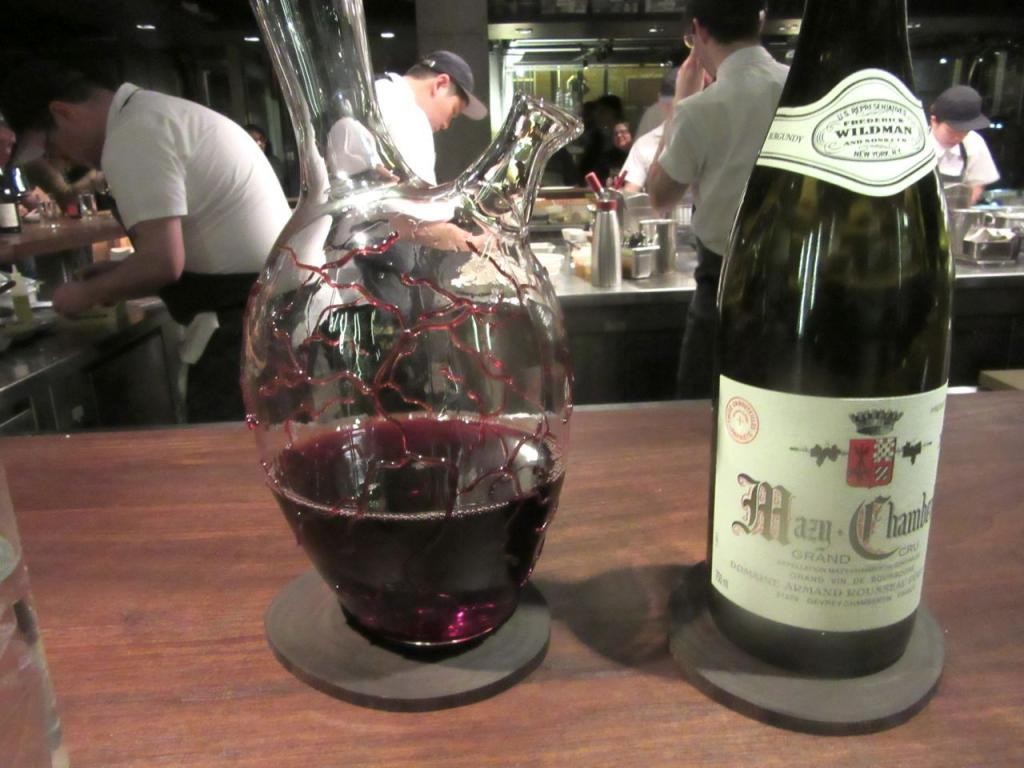 Ko’s veined carafe – provided for the grand Burgundy – looks like it was made in Murano for a rich vampire.

I wasn’t sure what to expect. Certainly not stools with backs. But yes, there they were, 22 of them. I spied Chang skulking in the shadows, but he didn’t move to throw me out. I counted it as one of the best meals I’d had in 2015, although the glorious $535 Burgundy, chosen for Wilfred by sommelier Jordan Salcito, may have added to the glow.

Now I figure I should deliver a first impression of the exotic doings on Eighth Avenue. My pals are not happy with their cocktails. The waiter probably shouldn’t have told Barry that the Alsatian was similar to a Negroni.  But my blood orange daiquiri, seeming a bit scant in its big water glass, is definitely refreshing.

The early menu is brief, with footnotes on the second page, some of them highly fanciful. The first explains that the romaine and walnut bagna càuda starter is a Caesar x Ho Chi Minh. It’s not Italian. It’s not Korean. It’s not Vietnamese. It’s not Chinese. But in fact the long white crisps of romaine with anchovy-walnut oil are quite fabulous.

Dry-aged Happy Valley eye round beef crudo with watermelon radish comes in a luscious satiny swirl. You could wear it to the prom if you don’t want to eat it (but you do).

A small bowl of soft tofu with smoked trout roe and rye bonji seems expensive at $20. Bonji is a seasoning made by Chang from fermented nuts, grains and seeds, but never mind. We forgive him. I’m scraping up the last that lingers. It makes a big bowl of small fried shrimp in the shell seem a bargain at $19. “We encourage eating the heads and tails,” the footnote advises. 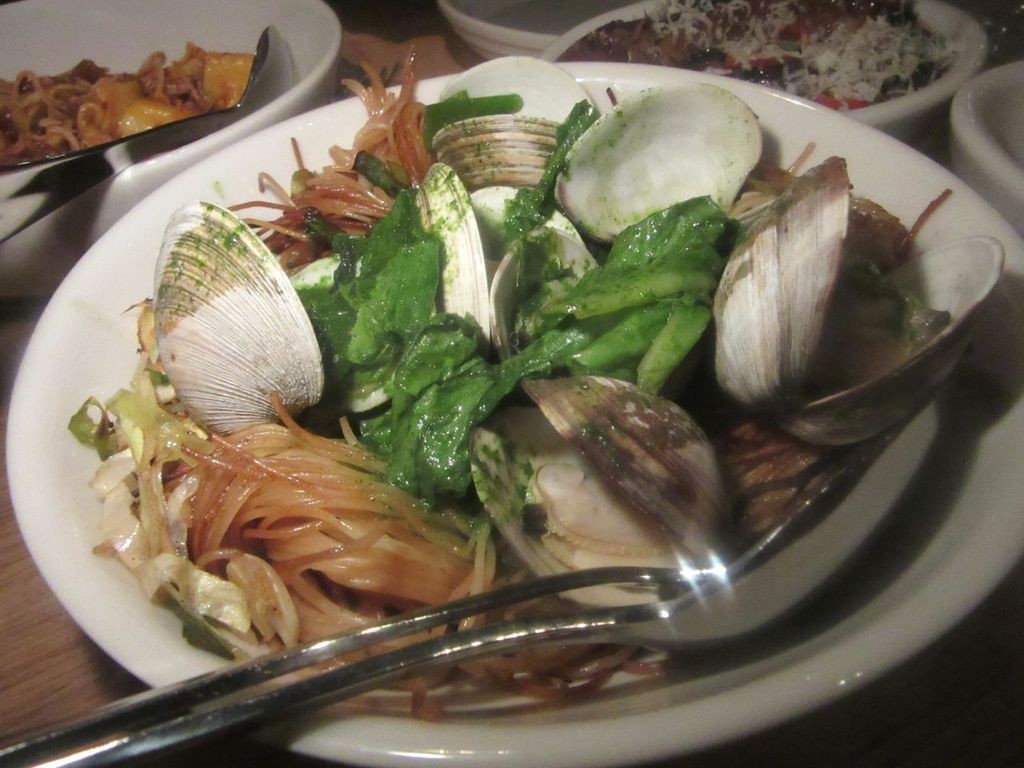 Whole clams in the shell nest in crisp chow mein noodles and cabbage in the excellent Grand Lisboa.

A side of fried fingerlings smeared with smoky yolk and tarragon is deemed a failure, but I find the crusty grilled Japanese sweet potato with anchovy and hot red peppers so appealing, I debate taking the leftovers home for breakfast.

As much as we like the pistachio bundt cake with ricotta cream, smartly disciplined and not too sweet — that’s how much we loathe the panna cotta with plum vinegar.  “Why is pistachio cake $14?” one of my friends complains.

Because there is no tipping and items seem to be marked up to cover staff salaries. That’s what it says on the menu.  “No tipping please.”  It’s repeated on the check. And there is no space for “just in case you want to leave something.”  It’s the new age.  I think I prefer tipping.

On opening night, Chang walked around giving customers a taste of the shaved winter vegetable because no one had ordered it. He was heard promising the menu would continue to evolve, and I’m sure it will.  My friend Lauren says she’ll be back. Will the line get shorter or longer as word spreads, and the multitudes throng? Will it be more pleasant if you bring a book to read while waiting in the spring?

Photos may not be used without permission of Gael Greene. Copyright 2015. All rights reserved