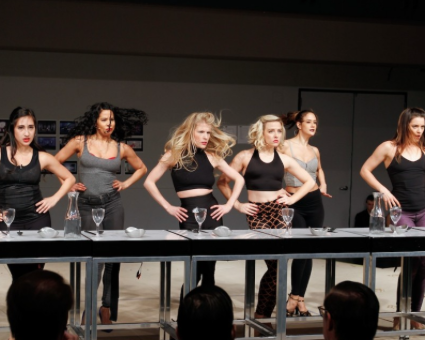 Media days will never be the same after Theater Pizzazz had the chance to meet, film and interview the cast of American Psycho, a thoroughly thrilling/chilling experience for Sandi Durell and photographer/videographer Evan Zimmerman.

You may think you know American Psycho from the the 1991 book by Bret Easton Ellis or the 2000 film adaptation starring Christian Bale, but you don’t know American Psycho the Musical and the amazing songs composed by Tony and Grammy winner Duncan Sheik (Spring Awakening), with a book by Roberto Aguirre-Sacasa (“Supergirl,” “Looking,” “Glee”), as serial killer Patrick Bateman, played by Benjamin Walker (Bloody Bloody Andrew Jackson), plies his trade in the horror-black comedy along with Tony winner Alice Ripley (Next to Normal) who takes on three roles. Walker, also a stand-up comic, had something to say about that.

Hear what they and some of the cast members like Jennifer Damiano (as Patrick’s secretary Jean) and Drew Moerlein (from the horror series “South of Hell”) as Paul Owen, had to say and take a peek at some of the production numbers.