An Act of God

If you have been searching for answers about the creation of the universe and what God really thinks about most anything, then a 90 minute discourse comically handed down from on high is for you in An Act of God, now on Broadway. 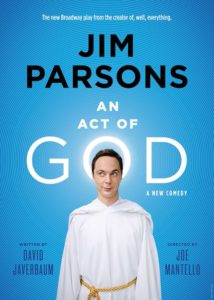 The one doing the handing down is television star Jim Parsons, clarifying things, thanks to the writing of thirteen time Emmy winner, David Javerbaum, head writer and executive producer of The Daily Show with John Stewart. Javerbaum also happens to be a social media darling with his Twitter account @TheTweetofGod, which boasts just under 2 million followers.

Check it out, A most recent tweet states: “Update: people are still stupid” or “I made women from men before it was cool.” These examples of pithy statements seem to resonate with followers who have re tweeted the observations thousands of times over.

And so back to the Broadway show that Javerbaum created.

The kind of tweets he releases is a shortened version of the play, where Parsons as God attempts to explain why things are the way they are and set all records (that he created) straight.

He is helped on stage by two angels, Gabriel, played by Tim Kazurinksy and Michael, performed by the very talented Christopher Fitzgerald. Jim Parsons certainly fits the mood and spirit of the writing with his personality and comic timing. And boy, does he have a lot of text to memorize…but then again, he is God… 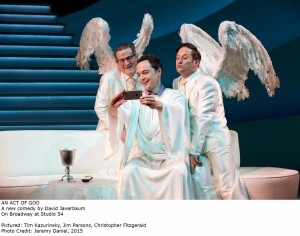 There is some light audience participation, thanks to Angel Michael walking around with a microphone and getting a few folks into the act (which is actually scripted.) But it’s not all light humor. Michael puts God’s feet to the fire when he challenges him angrily about the dark and bad things that happen in life. “Why is there suffering? Where were you during the Holocaust” Or on 9/11?”

I’ll leave it to you to go to see An Act of God for the answers and for the rest of the story.

One thing is for sure. From Book of Mormon to Hand to God to An Act of God, and the upcoming musical about the song Amazing Grace, there seems to be an endless thirst to further understand God, religion and why humans behave they way they do.

An Act of God, directed by Joe Mantello, plays at Studio 54 through August 2.