Anchors Away for “Disaster! On Broadway”

Just a few days ago, I went to see Disaster! On Broadway, the new pseudo musical that just opened at the Nederlander Theatre. I say pseudo because this theatrical piece weaves classic songs from the 70’s into what is supposed to be a hilarious, farcical, madcap comedy spoof.

“Supposed to” being the operative phrase. But most of the time, it just falls flat.

I have to say the creative team who chose the title have nerves of steel to decide on “Disaster! On Broadway “, because one could just imagine the review headlines. But I will not go there. That’s too obvious.

I kept thinking I was either on a cruise ship or in Vegas watching a musical revue. The opening number utilizing the disco mainstay “Hot Stuff” introduces us to main characters (wearing typically really bad 70’s fashions) and their stories, with tepid usages of the Hot Stuff lyric and was just a huge stretch all the way around.

Disaster! stitches numerous plot lines together, but basically it centers around an unscrupulous, narcissistic boat owner disinterested in the pending “disaster” about to befall everyone on the ship, which has been discovered by a disaster specialist and suspected by the journalist who is out to nab a story.

I mean, it must have been great fun creating the bizarre scenarios that befall the hapless crew on the Barracuda, the floating casino on the Hudson, about to be struck by an earthquake that has been predicted by the disaster specialist who also boarded the boat, along with a married couple, (with a wife diagnosed with a terminal illness causing three specific symptoms), a deadpan nun sporting a secret gambling addiction, a news reporter on the hunt for a juicy story, who happens to come across her former fiancé who is a waiter on the boat, and a nightclub singer with twins (a boy and girl played by one young talented performer) awaiting a proposal from the unscrupulous boat owner. Did you catch all that? Oh yeah, then there is the disco singer who has fallen on hard times on the boat with her little dog, and the best friend of the waiter who is trying to learn how to make time with the ladies. Throw in the boat capsizing, a tsunami, fire, sharks, rats, and a tap-dancing matron who used to be in the army, tapping out the Morse Code to the trapped couple below the deck instructing them how to open the trap door, while having Tourette’s episodes… and that just about sizes up Disaster!  I must admit I was giggling furiously at the tap dancing number because it was just so insane. 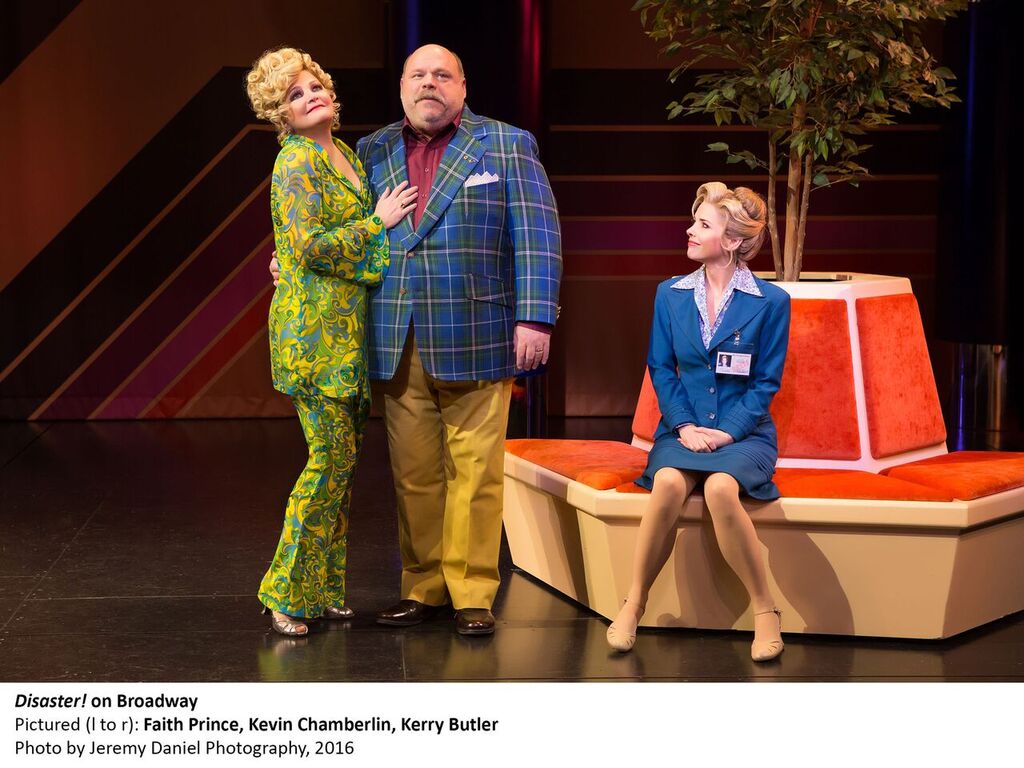 Disaster! is credited as being a mash up of the cheesy 70’s disaster movies, using the backdrop of these oh-so-famous 70’s songs (not sure many folks under 40 would really be familiar with them…or care).
Mostly it felt like the writers (Seth Rudetsky and Jack Plotnick) were just looking for lyrics from songs that provided opportunities for spoof-y comedy.
It’s a funny thing about comedy. You know when something is funny, and you surely know it when it’s not. Save for a select few funny moments, Disaster! just initiates puzzlement.

Broadway greats in the cast include Faith Prince, Roger Bart, Kerry Butler, Adam Pascal, Kevin Chamberlin and Rachel York. Why have all these supremely talented performers in this really odd piece?  Seth Rudetsky wrote himself a part, as he performs the role of the disaster specialist looking to save the folks on the ship. Lacretta Nicole, Max Crumm, Baylee Littrell, and Jennifer Simard, playing the nun (who steals the show) round out the featured performers in the cast.

Directed by Jack Plotnick, sometimes scenes in Disaster! feels like a free-for-all. My friend Wendy and I attended on St. Patty’s Day, and she commented, “it was a good day to go because most of the people in the audience had probably been drinking all day, and you have to knock back a few to get into this show.”

Disaster! is just silly, silliness, but I wish it hit the spoof, comedy and farcical mark a whole lot more. Mostly, I felt sorry for the wonderful performers. They all have glorious voices, and did their best with the arrangements of songs that have been played endlessly on the radio back in the day. Seeing this amazing cast and the set with special effects would be the reason to see the show. That and if you are super fond of the music of the 70’s (which unfortunately includes, “I Am Woman.”)

By the conclusion of Disaster! I found myself laughing, all right, but I wasn’t sure if I was laughing WITH the musical or at it.  http://www.disastermusical.com/