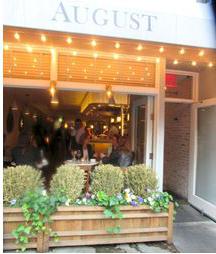 Village locals loved August on Bleecker Street. With its classics from the wood-burning oven, it was a haven of reality in the emerging snoot of upper-crust commerce on the evolving street. And now a new neighborhood clearly welcomes August on Lex at its uptown incarnation in Bloomingdale Country.

There’s a staccato of snackeries as you stroll north from Bloomie’s. But August, doors flung open to the street, exposing cocktail hour possibilities, stops you. A trio of Upper East Side sylphs sips white wine at a small marble round just inside the primitive raw wood planter with its oval bushes, ivy and pansies. The wooden frame suggests a country welcome and stands guard against sniffing dogs and panhandlers.

I’m early again. Determined not to be late, always early. Time to study the wine list and the menu – smartly wrapped in cork. There’s no cash reward here for early birds – no discount dinner — just the chance to eat in the magical light before the sun disappears. The collection of graphics hanging on whitewashed brick stand out in that radiance.

And the early crowd – tourists in twos and threes, office flirtations, silent seniors, the chef’s mother — creates a gentle buzz that will escalate later into a commotion. Tables filling and turning, filling again. The host – manager Jonathan Goldberg – scatters the new arrivals around the small space as if he has some plan. A solo eater settles at the bar. An unsmiling twosome gets stuffed into one of those tiny rounds opposite the bar. They look about to complain. But perhaps they arrived minus a reservation, so they hesitate.

I’ve persuaded my four pals to give me a taste of their dishes tonight. I’m put off by charred romaine in the Caesar and delicate peekytoe crab overwhelmed by broccoli on a lather of pistachio puree. I sense the chef Josh Eden is doing somersaults to create complexity.

Is he trying to say no one in the world has ever done this before? Does an extra ingredient or two help justify appetizers priced up to $21 and entrees starting at $24 but mostly $32 to $39? Or does price matter less above 60th Street?

He conceived the oven-crisped pita served with pea hummus and lemon yogurt “because people need something on the table” while waiting for dinner. It’s not merely crisp, it’s weirdly stiff, but he’s right, something on the table is good. I can’t stop eating it. The very attentive waiter brings seconds without being asked.

With merguez sausage, broccoli rabe and parmesan cream tossed house-made gnocchi, the creative fuss works. I also like fresh cavatelli with garlic confit and goat cheese, almost hidden under breaded-and-deep fried sprigs of young spinach. In homage to the season, burrata with sweet onion crumble is paired with ramps. Still, my favorite of the starters is the simplest: crisply fried green tomatoes on mustard sabayon.

A $60 Domaine La Fourmente Côtes du Rhône Village Visan, typical of many Grenache wines, pleases the penny pinchers, the wine fussbudgets and people like me who love something fruity and undemanding that goes with everything.

A few evenings later, poached rock shrimp are leathery and I reject the black quinoa nest they’re served in because it tastes like raw oatmeal. My companion assures me it is the finest quinoa and I am a plebian. I surprise both of us by liking the chill and texture of lime sorbet on raw hamachi, though we agree it is a little too sweet.

Chef Eden, a partner here, has been making his spring onion soup, a lighter riff on the French classic — with caramelized onions, veal breast, and gruyere broth-soaked bread — since he went off on his own at Shorty’s .32 after 12 years with Jean Georges Vongerichten. When he lost Shorty’s – it just wasn’t loved enough — he moved on with it to August. I like the soup more the first time I taste it, when it didn’t come with an excess of veal beast strings lurking below.

As he announced downtown August’s demise to FloFab in the Times, the chef had promised to recapture flavors of the original uptown, specifically with roast chicken, green bean salad and tarte flambé. Well, there is no tarte flambé. “That wood burning oven is definitely missed,” the chef laments.

Chilled green bean salad survives on the list of sides. And roasted organic chicken is one of the menu’s simpler dishes. For spring it sports morels and white asparagus, but by the time my friends pass the plate to me, the dark meat is gone, and for me, the breast is definitely too cooked.

The duck – breast blush red, the leg confit’d – fortified with apricot puree and a warm radish salad, more than makes up for the tamer bird. I like lamb rare, but my three thick loin chops are so rare, I can’t cut the fat off. As for what the lamb is wearing- ramps, fiddlehead ferns, lamb bacon, nasturtium petals and broccoli florets – count it a superfluity of spring jewelry arrayed against a brilliant carrot-orange sauce.

Only the hanger steak is more decadent. Even so, it’s shockingly delicious, nettles, pine nuts, black garlic vinaigrette et al. In the swamp, I find tiny potatoes no bigger than a kidney bean – Itsy Bitsy is the name — a revelation for me. Still, I worry about eating what looks like charcoal powder. “It’s vegetable ash,” the chef tells me on the phone. “It’s like the ashes on Morbier cheese,” he adds. “It’s actually good for you.”

I ask about the response to his white chocolate cauliflower risotto. “I just took it off the menu,” he responds.

“Why am I not surprised?”

“Actually, it got many compliments, but it seemed wintry to me.”

I’m afraid I do not walk easily in the white giant’s thigh. Ignore my quibbles. Everyone I shared dinner with was pleased. East-siders, they’ll return. My pal Bob was back next day for lunch. It seems that the chef is simply heeding the advice he says Jean-Georges gave him: You are not cooking for yourself. You are cooking to please your customer.

The loyalist troops piling into August suggest Josh Eden has indeed created a new Eden. Should they decide to cap the evening with the exceptionally delicate passion fruit soufflé and its side of wonderfully mellow vanilla ice cream, soot and raw oatmeal will be quickly forgotten.