Barbara Bush: A Classy Lady and a Lasting Legacy 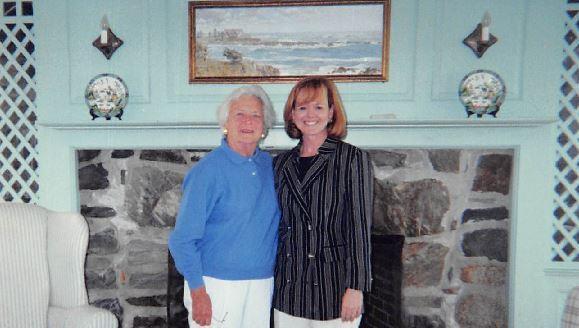 Peggy Conlon with Barbara Bush at her Kennebunkport home.

Last week we lost one of the most unique and beloved women our generation has ever known, Barbara Bush.  The outpouring of affection was across every media platform and was a great comfort to her husband of 73 years as he dealt with the loss of his lifelong partner and the love of his life.

I had the privilege of getting to know President and Mrs. Bush beginning in 2000 when I served on the National Dialogue of Cancer board which they co-chaired.  The Bushes dedicated considerable time to defeating cancer in honor of their daughter Robin who died of leukemia at the age of 3.  The loss of their daughter had a profound affect and they would tear up when they spoke of her many decades later.  It was when Robin died that Mrs. Bush’s hair turned white.  She wore her white hair the rest of her life, not bowing to media criticism.

We all grew to know Barbara over the decades, beginning with the Bush vice presidency (1981 – 89) and later as First Lady (1989 – 93).  She was well known for her humility.  She told reporters who asked why she always wore her signature pearls she said, “To hide the wrinkles in my neck”.  She also had a wicked sense of humor.  In a hospital stay not long before her death with her son George W at her side, she asked her doctor “Do you know why George turned out the way he did?”  The doctor played along.  “Because I smoked and drank when I was pregnant with him.” 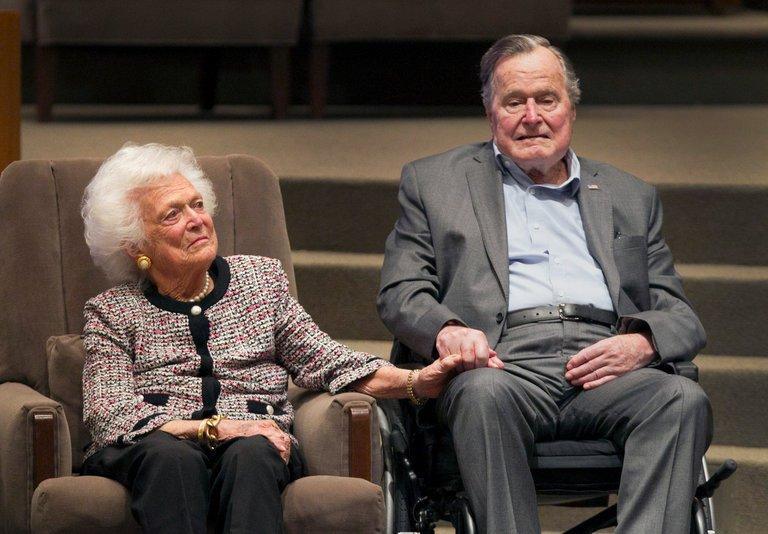 Mrs. Bush was the perfect partner for President George H.W. Bush.  She grew up a wealthy debutante, married George H.W. when he returned from World War II and as soon as he finished college they moved to Odessa, Texas where he began a career in the oil business.  In Odessa they lived in a two-family apartment they shared with a mother, daughter prostitutes.  The Bush family was often locked out of the shared bathroom when one of the women’s client would forget to unlock the door.  But Odessa was just the beginning of moves as her husband pursued a career of public service.  She was by his side raising their 6 children, campaigning, hosting guests from all walks of life as he served as a member of congress, Ambassador to the UN, Chair of the RNC, Ambassador to China, head of the CIA, Vice President and then President.

But of all her wonderful qualities, it was her compassion that shone through.  One of her first acts as First Lady was to visit an AIDS hospital.  In the early 90s AIDS was a stigma and it was widely believed that you could contract it by touch.  Images of Mrs. Bush cradling an AIDS infant sparked a national conversation and helped educate the public.

It was as First Lady that she chose literacy as the cause she would embrace for the rest of her life.  Mrs. Bush believed that literacy for all was a human right and the Barbara Bush Foundation for Family Literacy is in it’s 27th year.  I have the privilege of serving on this board which is dedicated to adult literacy and Mrs. Bush’s mantra that a parent is the child’s first teacher.  The foundation has hundreds of literacy programs around the country and has invested $19 million for a competition to develop mobile apps to help low literacy adults improve their reading skills.  The apps are in final market testing and will be launched next year.

As former President of the Ad Council which works with dozens of non-profits and every Presidential administration to promote their social causes, I can attest to the fact that no other political figure has been as focused and single minded on one cause as Mrs. Bush has been on literacy.  She attended board meeting and events sponsored by the foundation and when her health prevented her from traveling to them, she joined by video.  She had tremendous compassion for people who cannot improve the quality of their family’s life because they can’t read.  She encouraged parents to read to their children to pass along the gift of lifelong reading.  The family has asked that in lieu of flowers, donation be made to her foundation.  www.barbarabush.org

Mrs. Bush leaves a legacy of a life in public service.  Her love story with her husband of over 7 decades was a joy to watch.  I, and our whole a country, have lost a dear friend.

Here are some other wonderful stories about this remarkable woman. 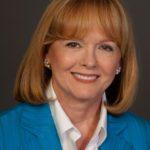 Peggy Conlon, is the retired President & Chief Executive Officer of The Advertising Council. During her tenure at the Ad Council, the organization tripled the work done on behalf of premier government and non-profit organizations. She has worked closely with Presidents Clinton, Bush and Obama on issues ranging from homeland security, obesity prevention, and high school dropout prevention.  She serves on the board of directors for the Barbara Bush Foundation for Family Literacy. Ms. Conlon was appointed by former President George Bush and First Lady Barbara Bush to lead the national media initiative for C-Change, formerly the National Dialogue on Cancer and served on its Board of Directors for six years.

Each one of us can make the world a better, kinder and more meaningful place. Here are ideas and thoughts and causes to help you do just that.