When The Three Tomatoes invited me to write about my own show, I have to admit feeling somewhat self-conscious. I’ve so enjoyed reviewing other artists’ shows for this site. Talking about one’s own work can be more difficult, but it’s a true gift to be given the opportunity to share what we see and why it means so much to us. 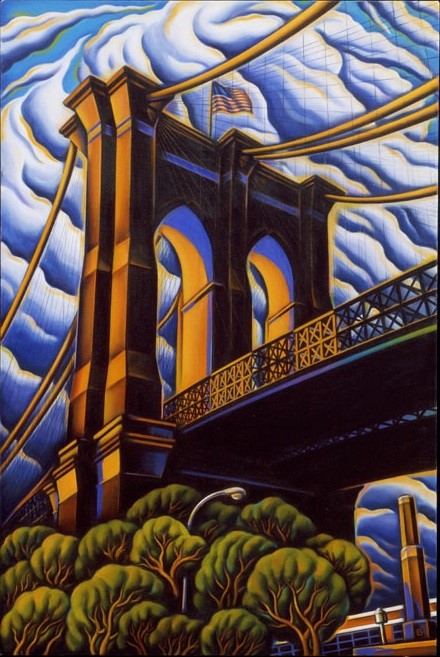 The Noble Maritime Collection, at the Snug Harbor Cultural Center, will be exhibiting many of my paintings and works on paper of New York City Bridges. This body of work has been created over many years, though my love of bridges goes back further. 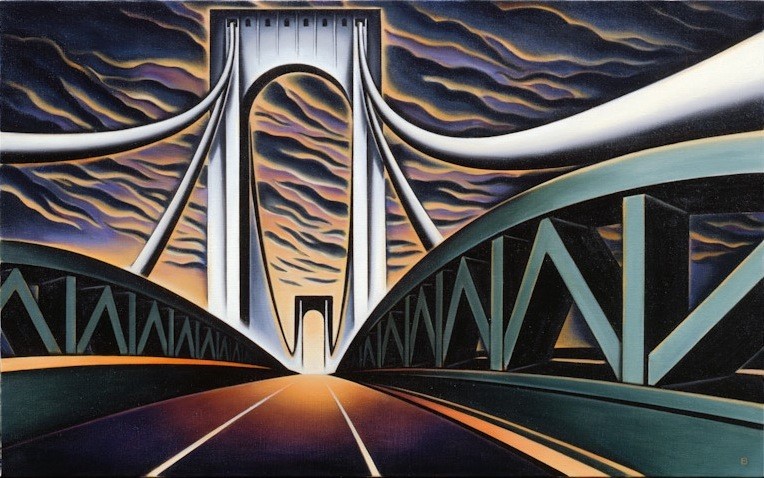 In the late 1970’s I lived in Paris. Taking my dog for walks, we gravitated to the Seine, which was nearby. I took my watercolors along, and when it was quiet, usually early Sunday mornings, I painted the neighborhood bridges. I loved and revered them. They stayed still while hundreds of years of history changed all around them. When I returned to New York City, I found myself drawn to our bridges too.

New York City Bridges are monumental icons of a constantly renewed, fast moving, multi-cultural society. They represent extraordinary innovations in engineering and construction. The stories behind their construction are filled with tales of heavy-duty politics, engineering feats, and dreams, and the sacrifice of many of the men who have worked on them. You have only to read David McCullough’s “Great Bridge,” about the Brooklyn- or Gay Talese’s “The Bridge,” about the Verrazano-Narrows, to be riveted by the enormous challenges involved in creating these structures we pass by, or over, daily. 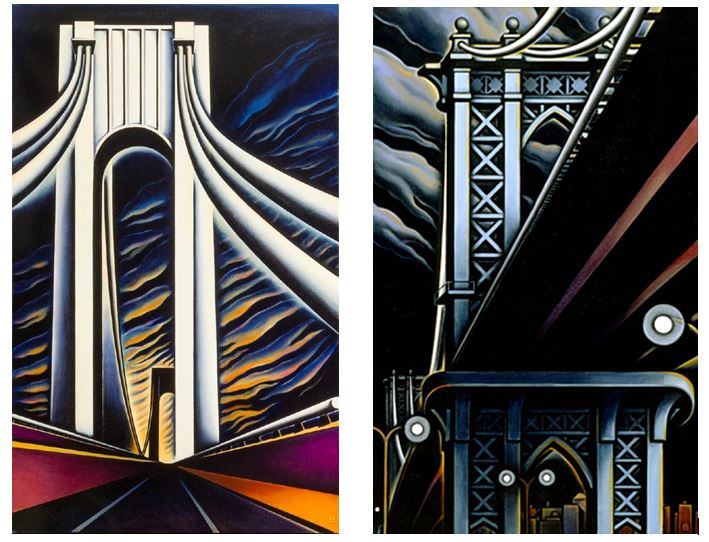 This is a particularly relevant time for Staten Island’s bridges. It’s home to two of  H. Ammann’s, engineering marvels: the Verrazano-Narrows Bridge, as the City celebrates its 50th Anniversary this November, and the Bayonne Bridge, currently undergoing major reconstruction. The Outerbridge Crossing has also been treated to renovation and the Goethals Bridge will soon be replaced in its entirety.

Erin Urban, Director of The Noble Maritime Collection, was well aware of these events and offered space for an exhibit within the walls of this remarkable museum.

A large exhibit area of oil paintings also include many of the preliminary color pencil drawings done for the paintings. Details and color may have changed, but you can see the basic compositions worked out on those drawings. Several of my collectors have generously loaned their artworks for the exhibit. The original art for the two subway posters MTA Arts for Transit had commissioned have been loaned. Many of you had probably seen those on your daily commute.

There will also be a room of works on paper; silkscreen prints, wood and linocuts, and my latest obsession, collage with drawing. It’s gratifying to work in various mediums. Each brings different variations in color and character, a different dynamic to the subject. 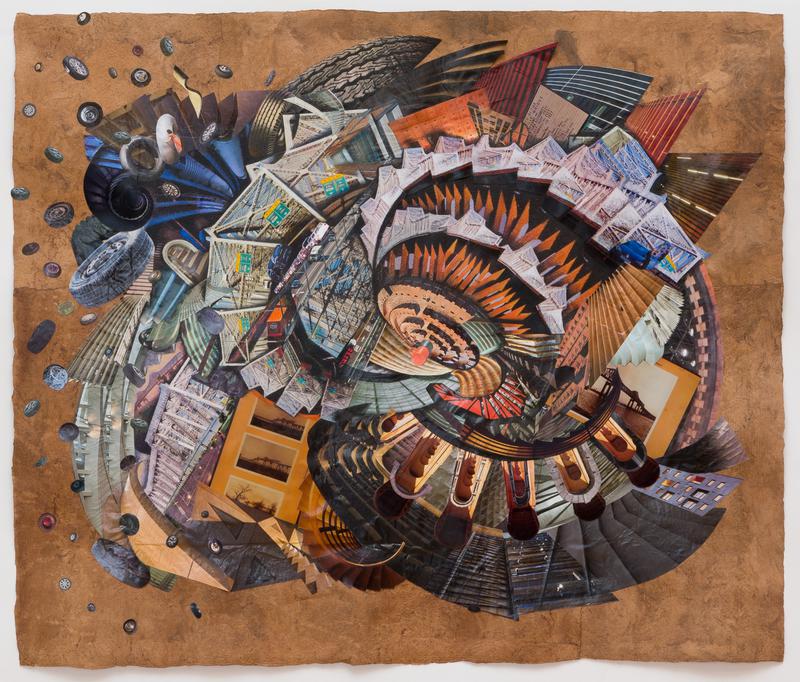 This will be the first public showing of the collage/drawing work I’ve been developing. I’ve found enormous pleasure in taking the dozens of photographs I ordinarily shoot for the research of a bridge, cutting them in pieces, and combining them in disparate shapes to make a spontaneous composition. It is a way of incorporating my love of Cubism, Russian Constructivism and Italian Futurism with the unique elements and experience of each bridge. 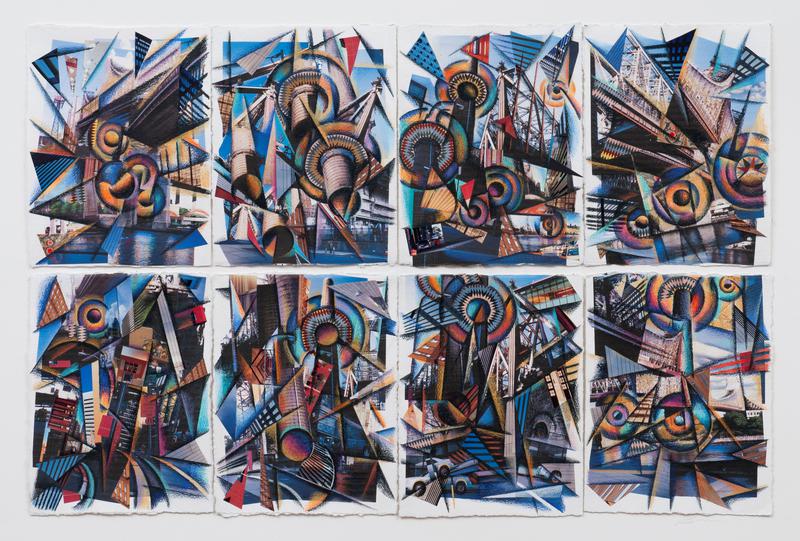 I live near the Queensborough Bridge, so that is one I’ve explored in many ways, but putting together the collage/drawing of “Queensborough Bridge, North-South”, with the myriad visual details of walking around and under it was among the most exciting. It felt as though it was coming together like the multiple pieces of fabric that make up a quilt, That led me to include scraps from pictures of quilts throughout, especially around the smokestacks. 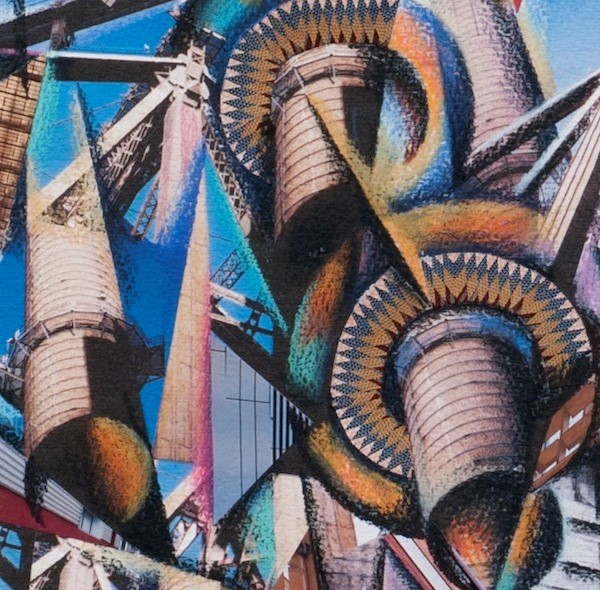 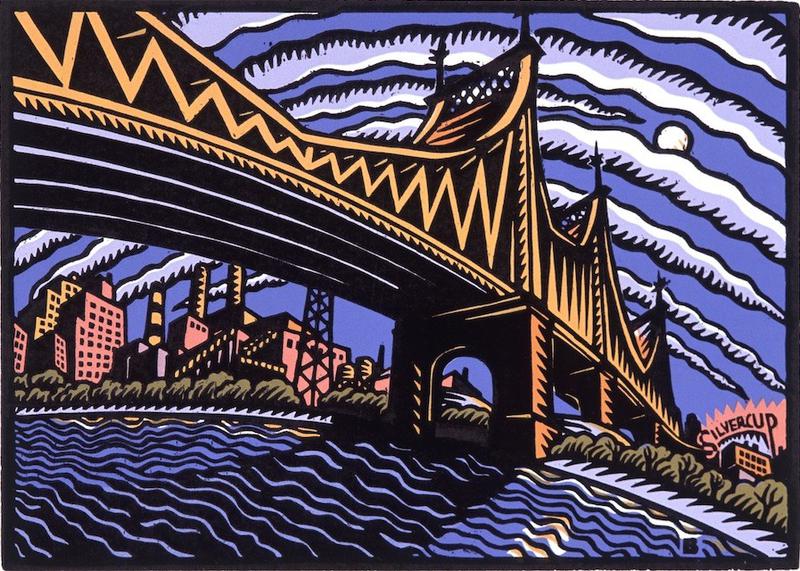 This is the view from the East River walkway on the Manhattan side of the bridge. The black line that describes the image is carved from a hard wood. The linoblocks, much softer, were used to block in color. The curve of the bridge is exaggerated to make a diagonal across the picture plane, almost dividing it in half; sky above, water below.

In 2005 this path led to a non-accessible, preserved area at the southern tip of Roosevelt Island. I was stuck by the contrast between the geometry of the City, so clear across the river, and the wildness on this island so close and seemingly forgotten. They are connected by the long span of the bridge. The mysterious, braced buildings in black, on the right are the remains of the old Smallpox Hospital. Those structures remain, but the rest of this area has since been transformed into the stately FDR Four Freedoms Park.

To repeat, slice, and reconnect the arches, my favorite part, of the George Washington Bridge, felt like reconstructing an intricate puzzle. The photographs were recycled, having been taken years before as research for a different work. 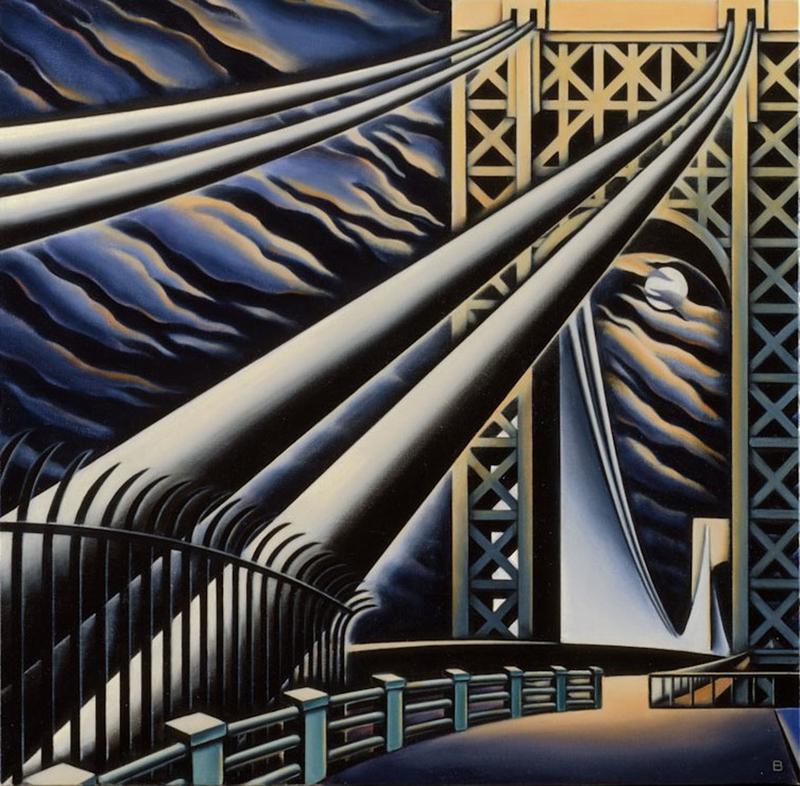 I had a grand time working on the George Washington Bridge, having the perspective of the cables create a tension that pulls the viewer into the painting. Also, seeing the curves at the top of the iron fence, protecting the cables, mirror the curve of the arches of the bridge.

In New York City, every bridge story begins and ends with the Brooklyn Bridge.

On the day I took these photographs I was having an especially hard time walking, everything seemed impossible. I had gone to the Bridge to be healed. Anyone who has walked across it knows that almost physical sense of rapture. This is where I find mine. 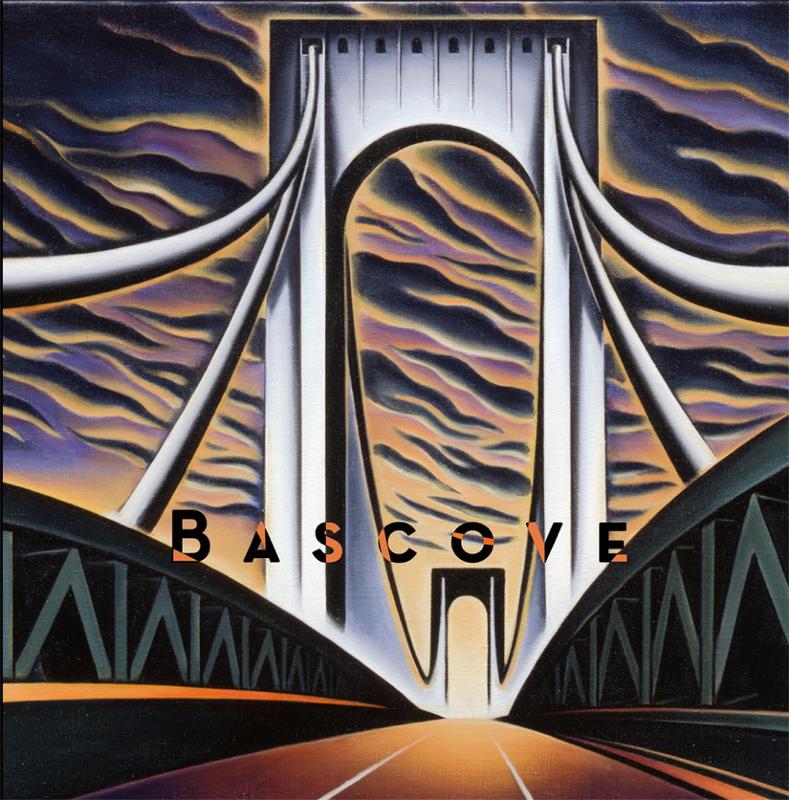 To celebrate The 50th Anniversary of The Verrazano-Narrows Bridge, there will be a related exhibition of historical photographs from the MTA Bridges and Tunnels, Special Archive, which runs to the end of the year.

“Spanning the Narrows for Five Decades”