A Beautiful All-senses Exhibition at  the Guggenheim Museum.

There is an absolutely beautiful all-senses exhibition at  the Guggenheim Museum.  I say “all senses” because it appeals to all the senses.  It is so beautiful, it’s called Mystical Symbolism—The Salon de la Rose+Croix in Paris, 1892-1897.  There is beautiful soft music playing that immediately relaxes you and there are beautiful chairs and couches spread around the large gallery to sit upon. 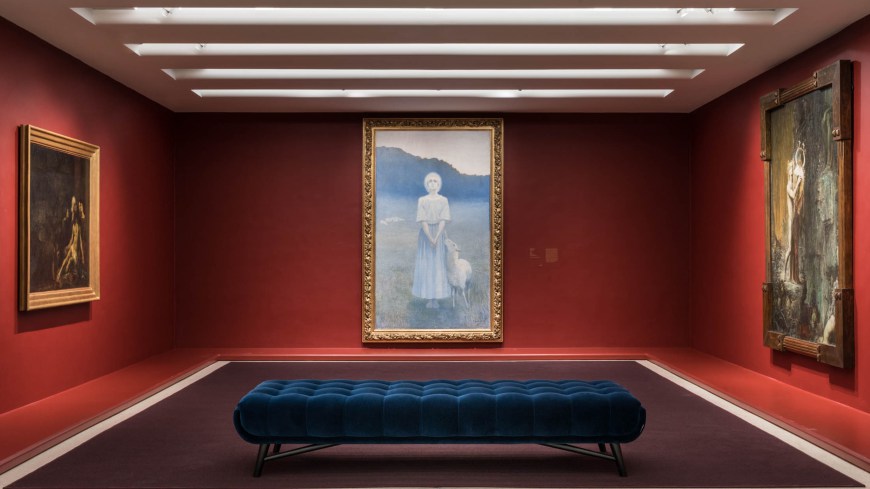 In 1892 this was literally the worship of beauty.  Held in Paris these annual exhibitions gathered an international brotherhood of artists from across Europe and the U.S.  Spiritualism rejected the anticlericalism, scientific theories, and realism of the previous generations for the spiritual, imaginary and anti=nationalist.  The art at the Salon was generally characterized by sinuous lines, attenuated figures and flattened compositions.  We see the adulation of medieval precepts and the art of the Primitives, New Testament narratives, the threatening femme fatale and the divine femme fragile.  This was the religion of art.

Participating artists varied in ideology and, to some extent, in style, but primarily employed a version of Symbolism visually characterized by sinuous lines, elongated bodies, and flattened forms. Their subject matter was allegorical, literary, mythical, or religious, replete with arcane symbols, ethereal women, androgynous beings, and monstrous creatures. They gravitated to themes such as the Greek mythological poet Orpheus, the art and precepts of the early Italian Renaissance, New Testament narratives, and female stereotypes from the threatening femme fatale to the untainted femme fragile.

You should definitely see it.  It’s on until October 4th.  It’s beautiful, almost overwhelming and unforgettable.