Books:  A Memoir and a Sequel 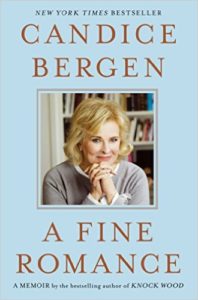 We finally got to reading Candice Bergen’s latest memoir, A Fine Romance which was released earlier this year.  Fans of Ms. Bergen (count us in that group) will love her even more, and readers who were under a rock when her hit TV series Murphy Brown was on air, will fall in love too.  It is an amazingly candid account of her marriage to the famous French film director Louis Malle, including its ups and downs, and his debilitating illness over the course of a year that led to his death; behind the scenes stories from Murphy Brown (which garnered her several Emmys) and Boston Legal; her utter devotion to her daughter; her happy remarriage and her adjustments to a very different relationship from her first marriage, and so much more. Candice is funny, poignant, and despite being one of the most beautiful women on the planet (still) is so very self-deprecating. By the end of the book, you’ll feel like you’ve made a new best friend.  We wish!! 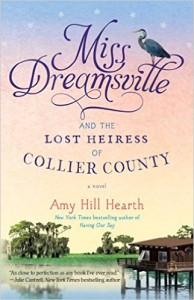 Our Old Friends Are Back!

The delightful thing about book sequels (assuming you loved the first book) is that they reunite you with old friends.  Well Amy Hill Hearth has done just that with Miss Dreamsville and the Lost Heiress of Collier County – the sequel to her first novel, Miss Dreamsville and the Collier County Women’s Literary Society.  Now you can start with the sequel, but then you will definitely want to go back to read the first book.

In the sequel, a year has passed in Naples, Florida.  It’s now 1964 and Naples is still a nowhere town in Florida in the middle of the swamp.  But change is the wind, and not necessarily for the good.  The cast of town misfits are back and the book club group reunites.  This time their mission is to fight a large development along the tidal river.  The developer, is the ex-husband of narrator Dora Witherspoon (the Turtle Lady) and she and the rest of the book club are ready to do battle to keep Dolores Simpson, a former stripper turned alligator hunter, who still lives in a fishing shack from losing that shack, along with the poor black community and others who live on the river.  Jackie, Miss Dreamsville, the Northern Yankee from Boston who started the book club, is front and center in this battle too, and there’s never a dull moment with themes like segregation, racism, women’s issues, and greed running through the story without losing the humor of the book.

Tags: a memoir and a sequelbooksthe three tomatoes