Brenda Strong and the cast of Lysistrata Unbound. Photos by Enci Box

John Farmanesh-Bocca directs the world premiere of a bracing new version of Eduardo Machado’s Lysistrata Unbound, starring Brenda Strong (Supergirl, 13 Reasons Why, Dallas, Desperate Housewives) as Lysistrata, in a collaboration between Odyssey Theatre Ensemble and Not Man Apart – Physical Theatre Ensemble. First presented at the Getty Villa as part of its 2013 Lab Series, it was inspired by American anti-war activist Cindy Sheehan’s efforts for peace following the death of her son in Iraq. With unflinching intensity, it examines the insurmountable cost of war and one woman’s epiphany in the face of personal tragedy.

Set in Ancient Greece to the cadence of a modern text, the 90-minute one-act play uses Farmanesh-Bocca’s tactile brand of physicality to heighten the social dysfunction between men and women at a time when war informed all behavior. It is a blunt, audacious, and often shocking depiction of a testosterone-driven age where men were defined by their ability in battle and women had no say over anything, including their own grief.

The story begins prior to Aristophanes’ comedy Lysistrata on the day her son is brought home dead from the war. She is told to mourn him and prepare him for burial by General Adeimantus (a haughty Vito D’Ambrosio) who declares that her son died for democracy and is a hero. He is an infuriatingly condescending figure who basically tells Lysistrata to cry and accept that he is dead. But this is her only son, and she has already lost her husband, father and brother in the wars. His unfeeling instructions add salt to what is essentially an open wound.

When the men return to bury him, a distraught, Lysistrata is unable to let them take him away. A week goes by, then a month. The body is decomposing and still she will not consent to his removal. Finally, Adeimantus commands the men to remove the body against her wishes. Lysistrata laments and questions whether this is all a man is – something to send to war. She prays to Hera, wife of Zeus and queen of the gods, for guidance and is sent a vision. The war must end, and the way to accomplish the task is for women to deny their men the only collateral they have to bargain with – sex. It stops until the war does.

Armed with a new mission, she unites the wives and, in a surprising show of solidarity, the courtesans as well, all of whom are mothers of sons who are slaves to war. Together, they revolt. The men rage back in anger.

Each section is layered with symbolism, taking on an almost ceremonial quality as it presents the essence of a part of the story. The percussive moves of battle, sexual insatiability in every form, drunken revelry, and the birthing of female empowerment are each ritualized with a potency that demands attention.

Apollo Duakakis, in his roles as Senator and The Institution, both comments on the story to provide context for the audience and also participates in it as the voice of a higher authority urging Adeimantus to reclaim order. D’Ambrosio turns in a viciously affecting portrayal as the General. All I can say is, if you don’t hate this character, you’re dead inside.

But the driving force within this new modern classic is Strong, who represents the latent power percolating within every human being until a lightning bolt moment splits them open and what has been burning inside finally explodes into the light.

Initially, she is stoic and stately, moving with a graceful elegance that makes it appear she is gliding across the stage. When she starts to push back against the status quo, a new well of power begins to emanate from the actress, projecting out like an invisible shield to accompany her character’s steadfast determination. Strong is a compelling presence, a beacon in a debased world. 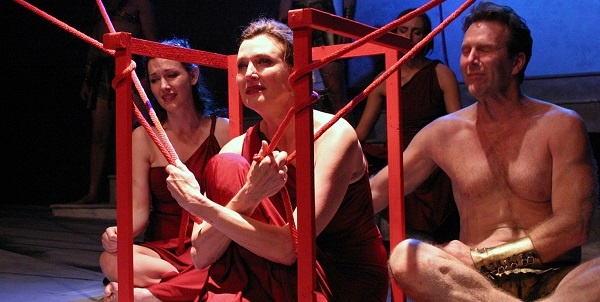 Costume designers Denise Blasor and Josh La Cour choose blood red, the color of passion, fire, anger, and strength to clothe the women in gowns that move like water. The rich hue is in sharp contrast to the earthy tones of the men’s bare-chested soldier gear and scenic designer Mark Guirguis’ marbled pillars and open-air Greek theatre setting. Lighting (Bosco Flannigan) and Sound (Adam Phalen and John Farmanesh-Bocca) give thoughtful depth to a production that has continued to evolve in an exciting direction.

It is the curse of men that physical violence and war are still the deciding factors in the world’s hierarchy. History belongs to those who write it and since the victor is often the one who scripts it for the ages, our past continues to resemble a laundry list of battles won and lost. Guns get bigger, methods of destruction bear more consequences, and always the youth are caught in the middle. Every mother knows no one wins when it comes to war. Lysistrata Unbound offers a potent message about the power that comes when the weak band together to take action, however unconventional.