Reviewed by:  Gerry Hempel, aka The Driving Diva 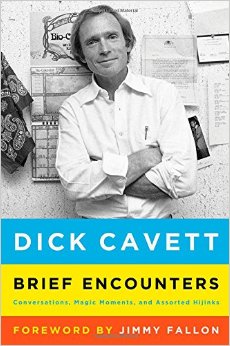 You are a Tomato if you remember watching The Dick Cavett Show. This Yale Grad has an aptitude with words that is not often equaled – by anyone. [Well maybe a few] He not only knows the words but uses them! To add to this, he remembers events and injects them for accurate, wonderful on target effects. He can make the most mundane come alive. DC is probably one of the most intelligent writers, raconteur, thespians – homo sapiens in this universe.

Dick Cavett’s latest book, BRIEF ENCOUNTERS: Conversations, Magic Moments and Assorted Hijinks is a gem and a must. It is a collection of about 57 “chapters” – each only 2-3 pages in length. When you realize that you only have a few more pages you wish somehow more would magically develop. The way he phrases a happening is tops. I found myself with a small pad and pencil writing down a word or his phrasing for me to perhaps use. Is it plagiarism if I “use”? Remember Mr. C if you read this, imitation is the greatest form of flattery.

In BRIEF ENCOUNTERS, Dick C. relates vignettes from his Nebraska childhood. You will learn he was not without a few “incidents” – typical of teenage boys – even in Nebraska. Then he takes you into his Yale life. Freshman year with four roommates. [Remember Dick was an only child.] Freshman had to swim in the Yale pool 50 yards to prove one could swim. [I query what would have happened if you couldn’t swim 50 yards?] Taking a Posture Picture in the nude was a happening for this Nebraska freshman, and of course, he tells more. After his college days he found himself in New York City. Experiences of all sorts -even having Christmas dinner alone at the Automat.  [Tomatoes you do remember the Automat?]

Forward a few years and then into California life.  Writing for Johnny Carson, Jack Paar and others and then finally getting his very deserved own show.  Dick C’s roster of people on his shows is more than impressive. I think I am safe and [fairly] accurate in saying he has interviewed every celebrity, every controversial person and probably a few not so noteworthy. The many varieties of homo sapiens are awesome, but the kicker is that he handles each masterfully and with absolute aplomb. The show was taped and in one incident “THANK GOODNESS”. I did say he handles every interview masterfully. Example:  The health guru, Jerome I. Rodale, was the guest. The conversation was going as planned and suddenly there was a deep gurgle from the guest. Yes, he [the guest] had just taken his last breath. The show never aired. It was one of the more unforgettable shows for this talented host. Repeat: Thank Goodness for taping! You will enjoy his other TV happenings.

Read about how Mohammad Ali landed sleeping in his bed. Of course the syllables about Groucho and others bear reading several times. Trust me, you will be fascinated page to page.

There is so much in the book as only DC can write. It is an interesting, interesting read. His Emmy Awards are so well deserved.

When Dick was a little boy back in Nebraska he reveals he was asked [like we all have experienced] “what would you like to be when you grow up?” Dick replied “an Indian or a Fireman”. To which I add: Thank you Mr. Cavett, you did not follow your reply. Millions are grateful. You are a TV icon, never to be duplicated.

FYI: Read all of Mr. Cavett’s book. His previous book DICK CAVETT TALK SHOW: Confrontations, Pointed Commentary and Off Screen Secrets like all, are hard to put down and enjoyed from cover to cover.

PS: DC:  I am so glad our paths crossed way back when and upon occasion now.