During the dizzying season of show openings on Broadway, it is not unusual for me to be in a theatre three or four nights in one week, and so recently, I saw a spate of new musicals.  Charlie and the Chocolate Factory, Anastasia and Bandstand. Each one couldn’t be more different from the other. 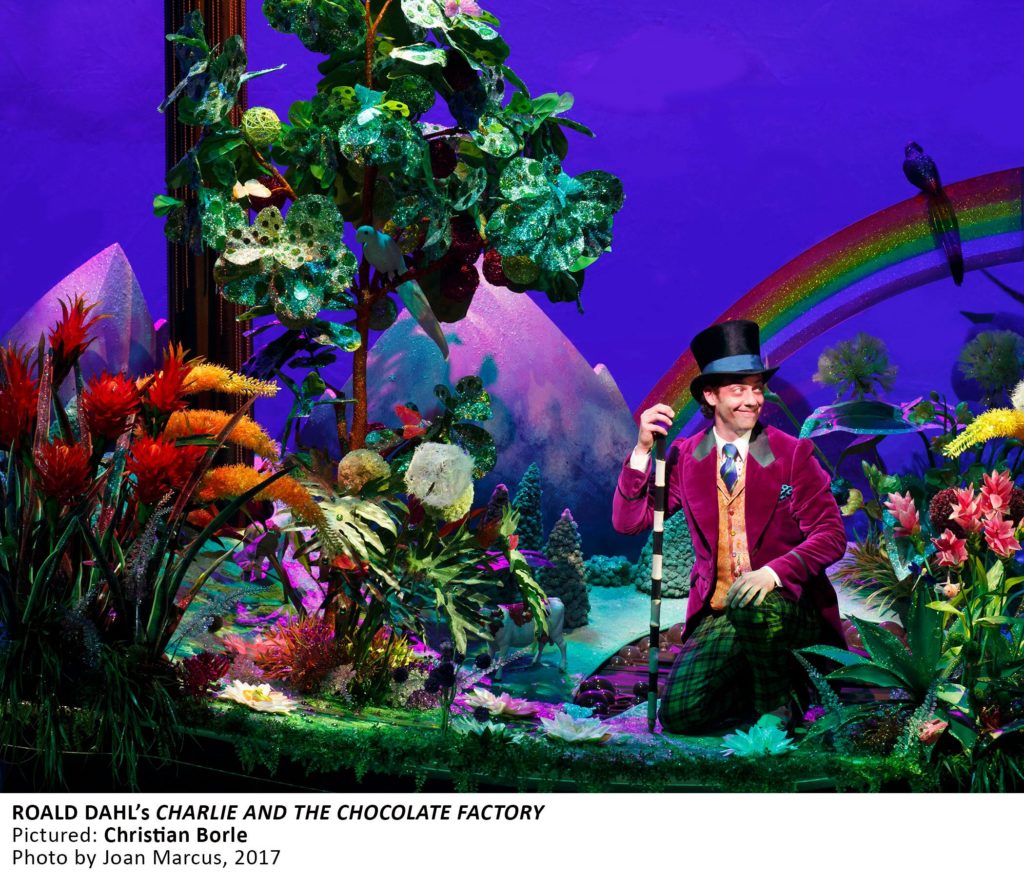 Charlie and the Chocolate Factory is based on the classic children’s story by Roald Dahl. Charlie Bucket is obsessed with chocolate. Willy Wonka owns a chocolate factory, is kind of mean spirited, and yet wants to find the perfect person to take over his fiefdom.

A contest is waged, and low and behold, Charlie is one of the five contestants.

During a tour of the chocolate factory, the different contestants meet various fates, and (once again!) low and behold, Charlie prevails. The story is that simple and linear.

For some extra spice, though, the cleverly crafted Oompa Loompas provide intriguing stage presence and a couple of sets of grandparents are thrown in, too, for good measure.  I will say the second act is much better than the first, and any musical with the fabulous Christian Borle in it will keep me engaged. Thank goodness he was allowed to shine in the second act, as he was completely under used and subdued in the first. It was also wonderful seeing John Rubinstein back on stage as Grandpa Joe, as well as the always hilarious Jackie Hoffman as Mrs. Teavee.

It is surely a treat to have the iconic “Candy Man” song kick off the show, along with the gorgeous “Pure Imagination” featured in the second act. Both those songs-you-can-sing-along-with were written by Leslie Bricusse and Anthony Newley.

Choreographed by Joshua Bergasse and directed by Jack O’Brien, Charlie and the Chocolate Factory has its moments, despite the draggy first act and one note story line. 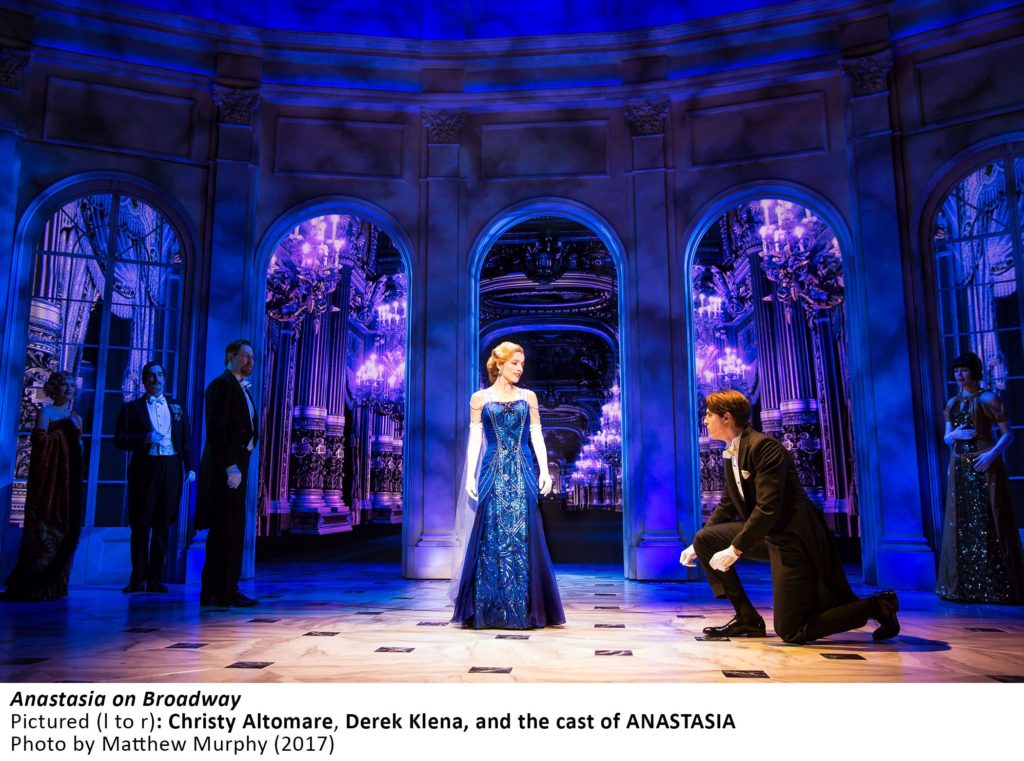 Next up, Anastasia, based on the films, with book by Terrence McNally, music by Stephen Flaherty and lyrics by Lynn Ahrens. This is a gorgeous, touching and lush musical that delights all the senses. The music is quite wonderful too.

The Russian empire is in its final days, and most of the Romanov family has been destroyed. The Dowager Empress grandmother left for Paris in the nick of time, and only young Anastasia survived. She sets out on a quest to unlock her past, with the aid of a con man (who is very charming) and an ex-aristocrat.

In the meantime, she is being hunted down by a Soviet officer determined to silence her.

This story has it all: adventure, suspense, love, and reunion.

The luminous Christy Altomare stars as Anastasia and plays opposite Derek Klena as Dimitry. The fabulous Mary Beth Piel plays the Dowager Empress, and Ramin Karimloo the dastardly officer.

Scenic design by Alexander Dodge is stunning, but the costumes by Linda Cho truly steal the show.

You can hear the murmur “I love the costumes” all around you.

Directed by Darko Tresnjak and choreographed by Peggy Hickey 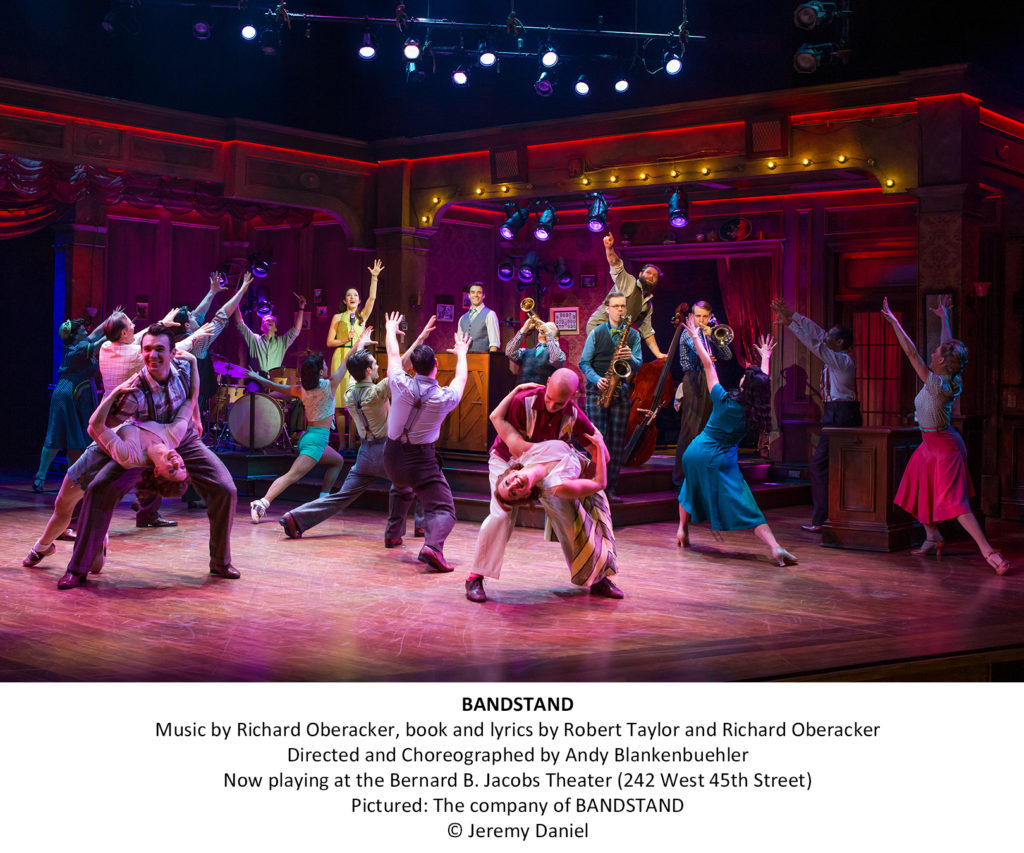 And finally, Bandstand. The title of this new musical indicates that there will be a story featuring a big band and folks having a swinging good time. There might also be an assumption that the music will be snatched from the Great American Songbook, with familiar songs we know. But this musical is all original music, and is more than stylized and cheerful performances. The imagined big band is more like a small group of musicians.

There is much more to this Bandstand, though, that is important. The theme of this musical  focuses on what happened to veterans after they returned from World War Two (or any war, for that matter.)

A small group of men back from the war decide to strike up a band made up only of veterans. They find their way to a young widow, heartbroken by her loss. The bandleader of this group was her husband’s friend and she is asked to become the singer and lyricist for the group. It is obvious that romance will ensue between these two, despite her loyalty to her deceased husband

The young and talented group hears about a national radio competition on the hunt to choose America’s “next big band”, and they are selected as candidates vying for this honor. As the competition to choose the band heats up, they make a decision to do something meaningful. At the last minute, they choose to perform a song that uncovers the raw challenges that the veterans are facing.

The song is titled “Welcome Home”, and after Bandstand’s star Laura Osnes finished singing it (beautifully), it was very moving to see the way some people in the audience connected with it.  Several older men in the audience stood up and applauded. That was really the emotional highlight of the show.

There is no question that there should be many theatrical pieces focusing on veterans; a very over looked community. Finally they are getting recognition.

The lovely Laura Osnes plays the widow and singer Julia Trojan.  The charming bandleader, Donny Novitski is performed by Corey Cott. The group of actors in the band actually play instruments on stage, so there is an abundance of talent to enjoy.

There are some great performances in this musical, but the star of the show is the dancing, thrillingly choreographed by Andy Blankenbuehler, who deservedly received a Tony nomination this week. He also directed the musical.
Book and lyrics by Bob Taylor and Richard Oberacker, and music by Richard Oberacker.

Important to note: an organization, titled Got Your 6 partnered with Bandstand on this project. Got Your 6 launched an  initiative in 2015 to challenge industry executives and content creators to produce thoughtful narratives around veterans and military families. The organization highlights projects that portray veterans accurately and responsibly.
An extremely important initiative to support.