My My, How Can We Resist MAMMA MIA! at the Hollywood Bowl? 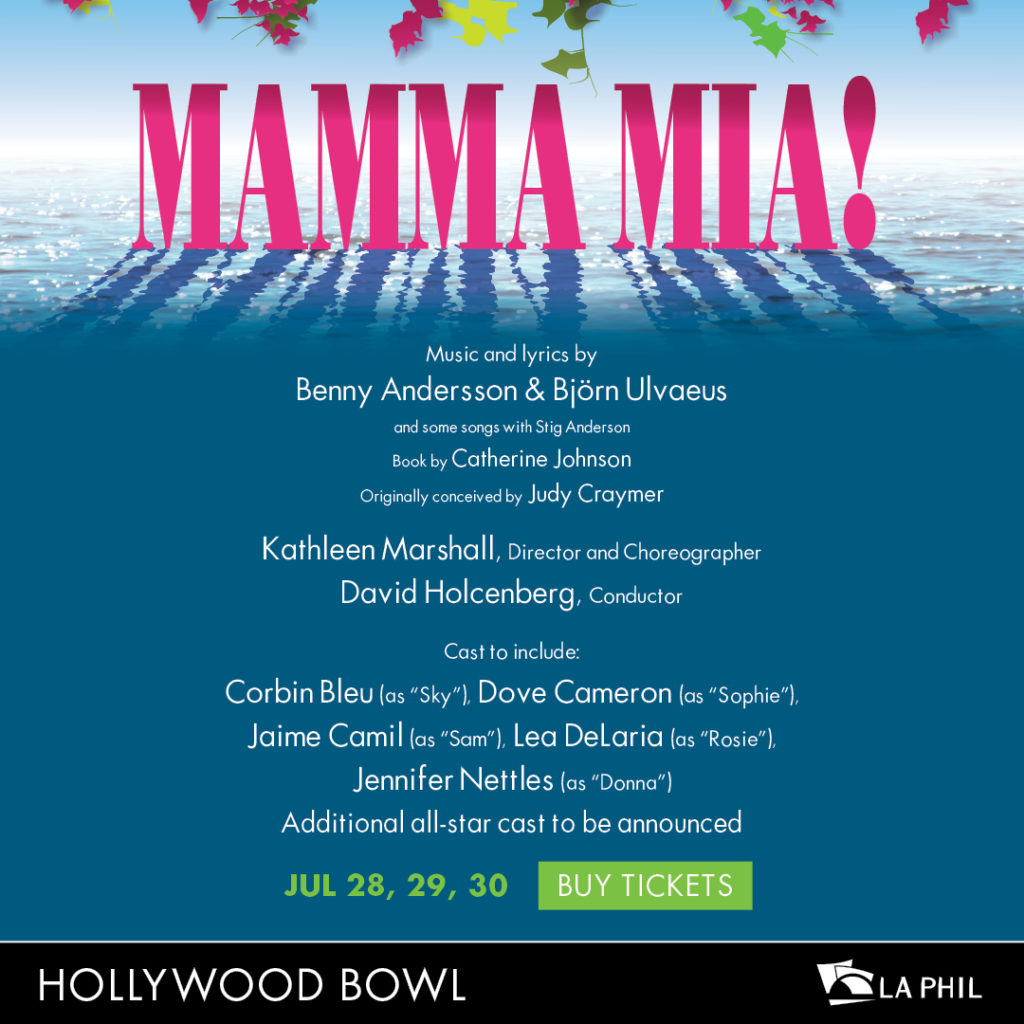 It isn’t summer in Los Angeles without a trip to the Hollywood Bowl, the outdoor jewel of LA, where you’ll find every kind of music imaginable throughout the season. For musical theatre lovers, the big announcement about what summer musical the Bowl will stage at the end of July is always a big deal, and this year’s fan favorite doesn’t disappoint. Mamma Mia!, the 2001 international phenomenon that captured the hearts of hopeless romantics around the world, will play the Bowl July 28, 29 & 30 so get your dancing shoes ready!

The heartwarming story about a young woman’s plot to uncover the identity of her father among three of her mother’s former loves, kicks into hilarious high gear when she invites them to her wedding and they all show up. Sophie (Dove Cameron) doesn’t know if it’s Sam (Jaime Camil), Bill (Steven Weber) or Harry (Hamish Linklater) who will turn out to be her dad, but solving the mystery is sure to be full of comic twists. As for her mother, Donna (country star Jennifer Nettles), she’s about to take a trip down memory lane she never imagined with the support of her pals Rosie (Lea DeLaria) and Tanya (Tisha Campbell-Martin). What could go wrong, right?

Tony Award-winning director Kathleen Marshall directs and choreographs the production. David Holcenberg, currently music director of the Tony-nominated Broadway musical Groundhog Day, leads the Hollywood Bowl Orchestra through Benny Andersson and Björn Ulvaeus’ score, which contains two dozen incredible ABBA hits like “Dancing Queen,” “Gimme! Gimme! Gimmie!” “S.O.S” and “Voulez-Vous.” If that doesn’t get you up dancing in the aisles, nothing will.

No matter how many times I’ve seen the musical live on stage or the film starring Meryl Streep, it never gets old. At the Bowl it promises to be an extra special night under the stars. Get ready Tomatoes – here we go again!

Ellen Dostal is a longtime west coast editor and reviewer for BroadwayWorld.com, the largest theatre website in the world. A self-professed musical theatre geek, she also publishes two popular Southern California theatre blogs – Musicals in LA and Shakespeare in LA – and has covered jazz and classical events for the KJazz 88.1 FM and K-Mozart 1260 AM Arts and Music Blogs. As a founding member of New Musicals Inc’s repertory company, she has developed roles in countless new works, many of which have been produced regionally and in New York. She also continues to work as an actress, singer, and voiceover artist in Los Angeles.  FacebookTwitterGoogle+PinterestEmailShare