Chocolate’s journey to the Old World from the New began when Christopher Columbus on his fourth and final voyage to the New World.  Just as he was about to sail back to Spain, he noticed a Mayan trading ship docked 30 miles off what is modern day Honduras. He and his men boarded the vessel wanting to snag some last minute trinkets to take back to Spain and that’s where he first spotted cocoa beans. The Mayans made a big fuss over the beans, treating them like gold, so Columbus bought all they had to bring back to Queen Isabella.  From Spain, cocoa beans next traveled into Italy. 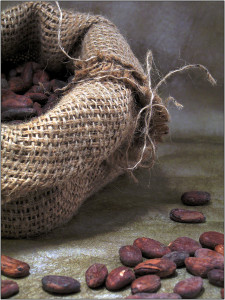 In the New World the Mayans and Aztecs only used the cocoa beans to make a drink, but once the beans got to the Old World the Europeans started playing around with it and discovered all sorts of yummy uses for the almond-shaped, slightly bitter beans.  Italians invented chocolate pudding, chocolate custard and even chocolate sorbet.

Veritable Willy Wonkas, Italy’s chocolatiers love thinking up new flavors. Italy’s most popular chocolate was invented because of war! Due to the long Napoleonic Wars in the mid 1800s transport of cocoa beans across the Atlantic was severely reduced and Europe began to experience chocolate shortages. To try to extend their meager supplies of cocoa a northern Italian company began blending ground hazelnuts into the cocoa. The result was a creamy, flavorful delight, which became an instant success.   Shaped like an upside down canoe, the candy was called Gianduiotto, the name coming from Gianduja, a popular Italian Carnival character.

Today, Italy is home to some of the world’s finest chocolate companies like Caffarel, Ferrero, Pernigotti and Venchi.  And smaller firms such as Amedei and Domori are winning gold medals in international competitions. In just one region of Italy, Piemonte, there are more master chocolatiers than in Belgium and France combined! In Tuscany there is such a concentration of fine chocolate makers that journalists have dubbed the area between Florence and Pisa Chocolate Valley.

Milk chocolate gets the short shrift here in the States, where gourmets focus exclusively on dark chocolate. The Italians, who love the richer taste of milk chocolate, have managed to retain the sophistication of dark and all of the decadence of milk chocolate.  Slitti, a Tuscany based company, is one of several Italian firms to create a line of milk/dark chocolate hybrids. Instead of the usual 31 to 35% cocoa content found in most milk chocolates, Slitti’s LatteNero –“milk-dark”—contain cocoa concentrations as high as 45%, 51%, 62% and 70%. The result is amazingly smooth, with a milk chocolate flavor, but without the excessive sweetness of commercial milk chocolate.

One reason Italian chocolate is so good is that Italians care so much about the purity of ingredients. For example, Italy bans genetically modified foods.  But there is no better evidence for their concern for quality than the country’s long battle with the European Union over cocoa butter. Italian chocolate makers refuse to use anything but 100% pure cocoa butter, even though, by law the EU has voted to allow makers to add a certain percentage of vegetable oils, like palm, to substitute for the more expensive cocoa butter. But for Italians this is NOT ‘pure chocolate,’ but a chocolate-like substance, and should be labeled accordingly. 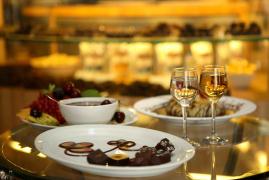