It’s glitzy, it’s enormous, it’s Hollywood on steroids.  It’s Paramour, a musical with the thinnest of plots, shoe horned into a Cirque du Soleil extravaganza.  Paramour is  the first musical produced by Cirque created specifically for Broadway. As you would imagine, Paramour is defined by Cirque’s ability to create a spectacle with astounding feats of acrobatics and aerialists circling above the audience, performing death-defying choreography.

I give the fabulous Cirque du Soleil organization a lot of credit as they are expanding and growing beyond the way their productions have traditionally been experienced.

For that they get a gold star.

The story is really not the point, but it goes like this; a young starlet is the apple of the eye of a big Hollywood director. He snatches her out of obscurity to make her a star. Only thing is, she is part of a song writing team and she is in love with her partner, Joey, the composer. Does she marry A.J. to live in the lap of luxury and be the toast of Hollywood, or does she stay with the man she loves?

38 performers grace the stage, high above, around or on it, and come from 13 different countries. There are acts that are standard issue Cirque du Soleil, including the aforementioned death defying aerialists and acrobats. There is one beautiful set that reveals itself to be the top of a New York City hotel, complete with water tower and signs. A full out chase scene ensues where the characters fall from the roof… only to bounce back up again. Ah! That was a great convention, as there were trampolines strategically placed out of site,  and the performers were having a grand ole time falling and bouncing back alllll the way up. Only thing is, that scene  was just a little too long.

We knew the outcome once one person bounded back…but it did continue beyond the point it should have ended.

I enjoyed the music, and the sumptuous costumes, the beautiful singing by Ruby Lewis, playing the character of the elegant Indigo, pursued by A.J., the director, (Jeremy Kushnier) and Indigo’s writing partner Joey, performed by Ryan Vona.

Sure, Paramour is entertaining, and the astounding featured Cirque acts are always superb. The way the arc of the story was crafted with the express purpose of injecting Cirque acts however, appeared less than organic or authentic.

But this is just the first attempt at a full scale musical. Cirque du Soleil will be producing a revival of The Wiz next. 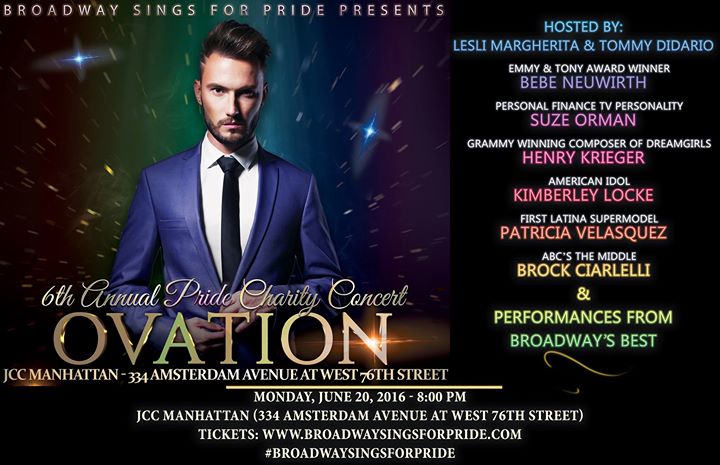 Broadway Sings for Pride, a wonderful yearly event presented during Pride month, which raises funds for LGBTQ organizations, is celebrating it’s sixth year. On June 20, among the dozens of performers and celebrities performing songs from the stage as well as popular songs will be Bebe Neuwirth, Kimberly Locke, Suze Orman, and  Frenchie Davis.

This year’s event is called Ovation and will be honoring the Tyler Clementi Foundation and activist Ruth Coker Burks.

I always enjoy supporting Broadway Sings for Pride, and its fabulous founder, Neal Bennington, who is passionate about the cause, and so enjoys creating this lovely event. I will be interviewing the honorees on stage that evening as a part of the extensive and entertaining show. I hope you will join us at the JCC on Amsterdam Avenue beginning at 8 PM. Please check out www.broadwaysingsforpride.com