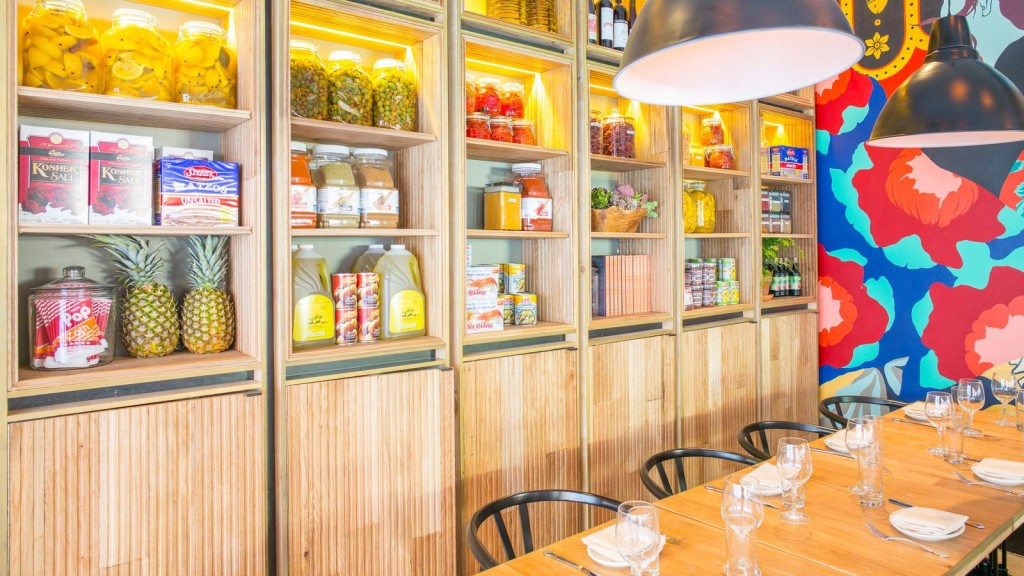 There’s nothing wrong with a hasty union. Some very rich family trees began with vows taken in a hurry. When Chef Einat Admony announced she would move into the glass-wrapped Soho space that had been Taka Taka, a hapless Japanese taco canteen, I couldn’t wait to taste. She talked about fusing Spanish flavors with those of her own Israel heritage at Combina. Why not? She’d worked with Bobby Flay at Bolo, after all.

I’ve never been to her falafel joint Taïm, now cloned, or Balaboosta. But I was in rapture the spring of 2014, on my first visit to Bar Bolonat in the West Village. I kept returning again and again for the mahogany poussin, lacquered to a crackle in pomegranate syrup and served for two or even three, in a black iron loaf pan with candied walnuts on crispy rice and potatoes. Oh, the homey, grandmotherly indulgence of it. And Admony’s unique Israeli-inspired vegetables came early in the veggie-forward crusade.

Now I didn’t want to wait, even though I’ve seen the error of rushing too soon to judgment. I figure with  Bar Bolonat’s executive chef Molly Breidenthal seconding Admony in the kitchen, it will guarantee more delicious riffs on eggplant and squash and José-Andrés-only-knows what brilliant dazzle with chicken.

“Combina” means “combines” in Spanish and “creative solution” in Hebrew, she told Rob and Robin at New York. The excellent canned pickled mussels from Spain, served in the tin with squares of matzo, certainly strikes me as a delicious, no-effort, creative solution. 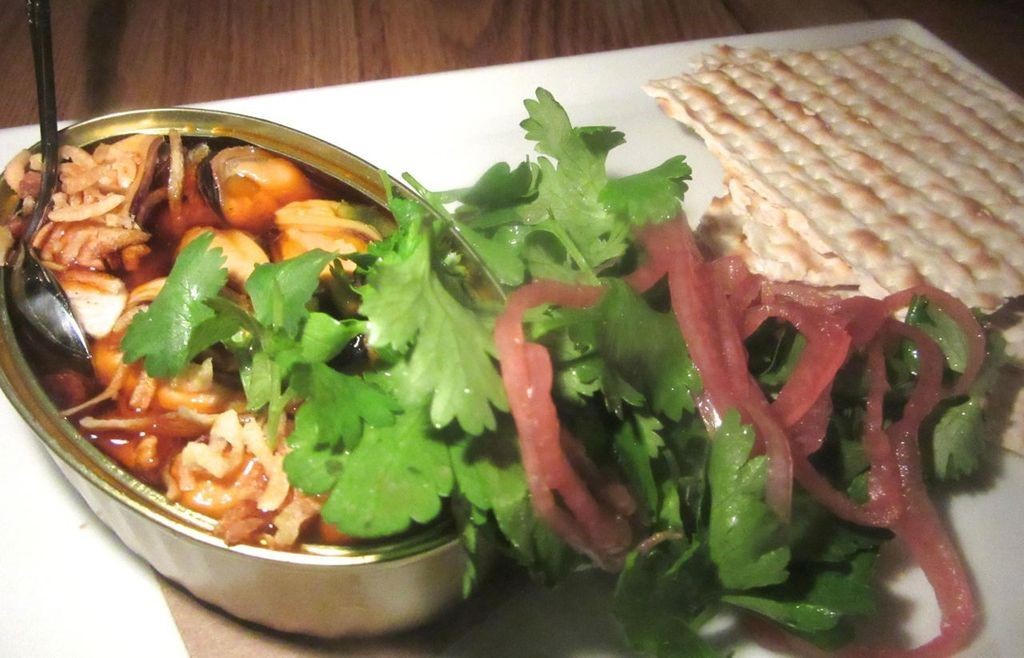 But my friends are surprised when our agreeable waitress explains that the mussels do, indeed, come in that very can. I explain to my pals that canning is an art form in Spain. Very expensive limited cans are released every year, and aficionados hunt for them. In Barcelona, at a bar called Quimet & Quimet, locals come before lunch for a plate of a dozen canned tapas: razor clams, anchovies, tuna, sardines, cheese. (Click here to see my Barcelona Hot List.) It’s certainly easier than making gefilte fish from scratch.

From the street, through the vast expanse of plate  glass windows, Combina already beckons. I can’t say if the bold flowers on the wall are inherited from Taka or new, but I understand the shelves of supplies that ring the room make up for the place lacking a cellar.

Inside, women rule. Attractive greeters at the door. Efficient servers (who bring spoons for sharing  when you ask, and when you ask again.) The bussers are men. I read what Admony told FloFab, Eater, and GrubStreet. She didn’t return my call. But that’s okay. I’m here. I’m a fan. 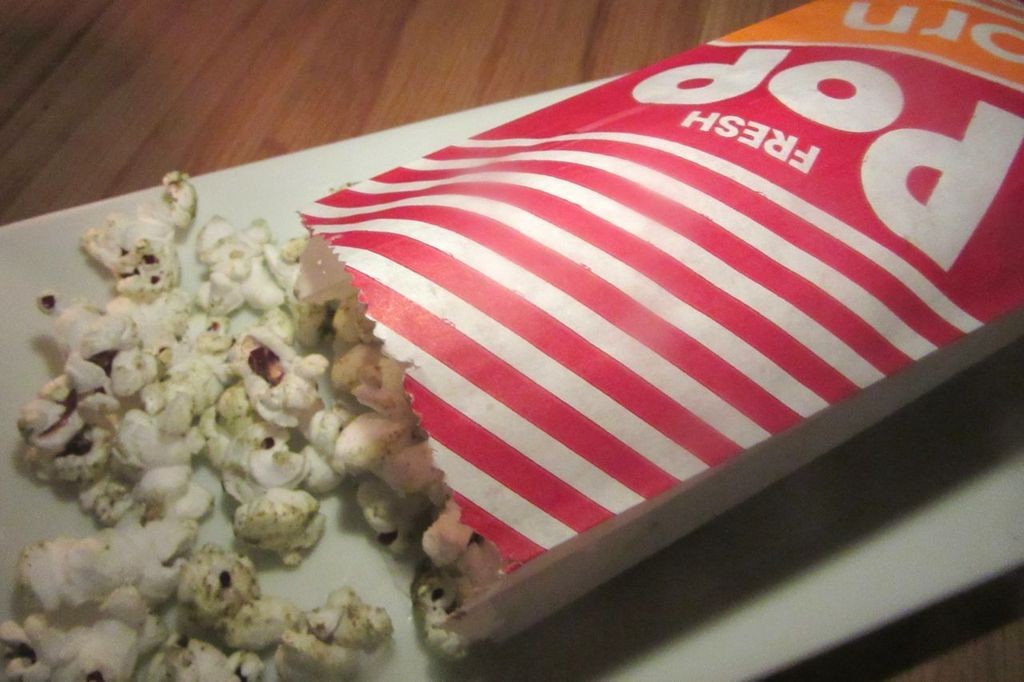 I order a $5 bag of za’atar popcorn to keep us going with drinks while we wait for a tardy pal. Saturday traffic is intense, now that 100,000 Ubers and Lyfts and rival car services have paralyzed the usual flow. I might have chosen olives or almonds. They’re even pricier. (So far, this could be home cooking, even in my home.)

The popcorn and splendid salted-cod donuts arrive before drinks. I start to order. There are only 18 items on the menu…I cast about for a dozen items to please these pals. The bar is slow but the kitchen is fast. Our overdue friend races in, apologizing. He’s just in time to drag the last of the cod donuts, still hot and delicious, through the remaining smoked paprika aioli. 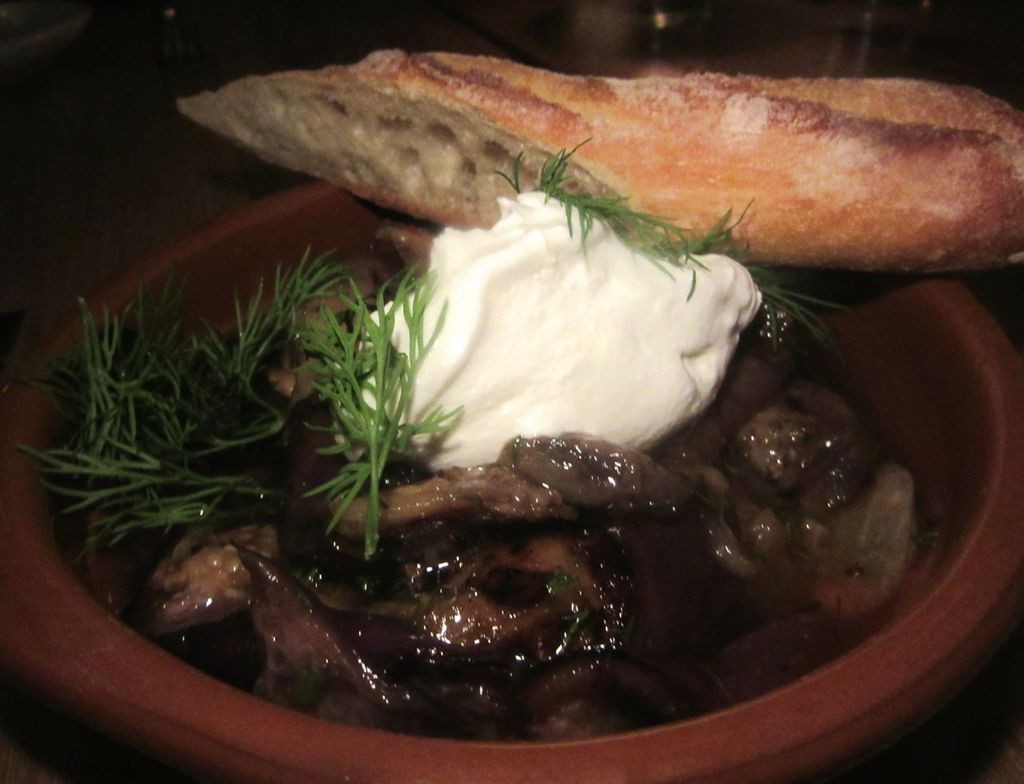 Soon the bare table is paved with plates. The food is mostly wonderful, assertive, and original, starting with tangy and garlicky eggplant escabeche under a confetti of dill to pile on warmed baguette with a slick of thick yogurt. (And, yes, the few inches of baguette could have been bigger – we are four, after all, sharing, and the place is still in previews…shouldn’t the house be more focused on seduction?) 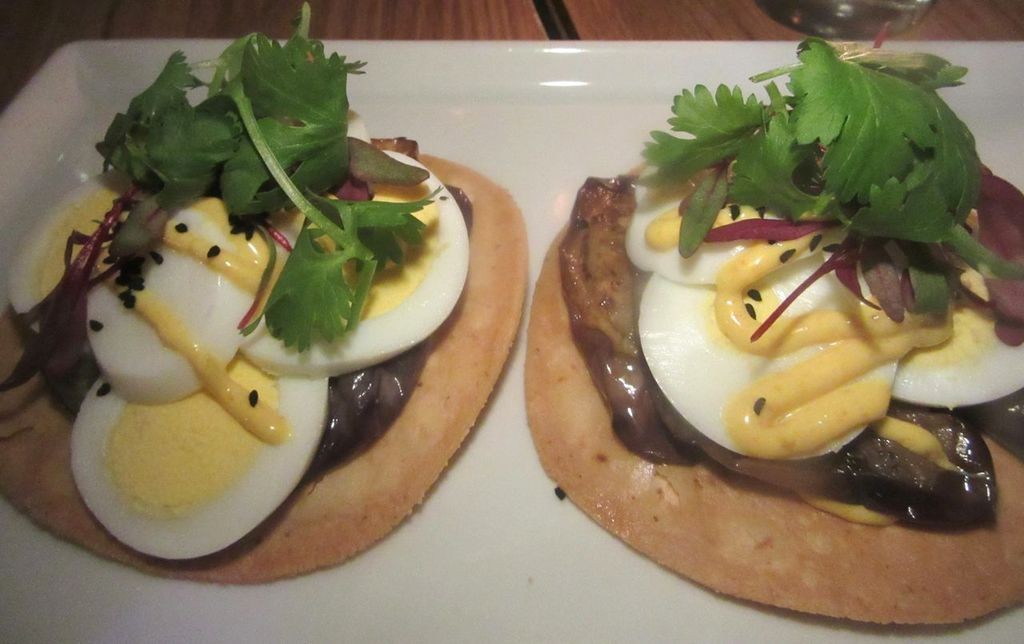 Our server has explained that “sabich” is an Israeli sandwich. Inspired by Iraqi Jews, it would normally be  stuffed into a pita and eaten on the morning of the Sabbath. Here amba (pickled mango), eggplant, and hard-boiled eggs are layered atop a duo of tostadas with a sprinkle of black sesame seeds. Not as exciting as the escabeche, but, as far as I’m concerned, too much eggplant is just barely enough.

Blood sausage can be soft and bland, more abouttexture than flavor. But Combina’s morcilla sausage, paired with piquillo peperonata, is chewy and lively with chile heat. I find myself longing for another inch or two of warm baguette.

Big caramelized chunks of winter squash are draped with crushed peanut picada, a variation of the Catalan seasoning with garlic, parsley and burnt  almonds. It’s just $12, but a stingy portion, too. Just a few weeks ago, Yunnan Barbeque managed to serve four slightly larger whole crispy prawns for the same price as two here.

Well, Einat Admony, in the countdown to opening, said it would be “small plates.” I request a fourth  harissa-honey fried drumstick — three to a $14 portion, $4 for the extra. These are very small drumsticks, but very good. I want to order seconds, but I feel close to that moment when my left lobe wants more, but my right lobe says, “Stop kidding yourself, lady. ”

And besides, there’s still the marvelous lamb belly — fatty, its rooftop crisp, on a puddle of harissa romesco with small dabs of yogurt. I get my companion, Jacques Torres, the Meilleur Ouvrier of France in pastry, to cut each little patty in two for our quartet of gourmands. The squares are precise and perfect, like his chocolate-covered bonbons.

There are only two desserts on the menu. My friends agree to order them both for my sake as the  Insatiable Critic. Ice cream flavored with hawaij (a Yemeni ground spice mix usually used for soups or coffee) is pleasant enough with brulee’d bananas, if you crave a sugary finale.

But not even dipping in chocolate can rescue long, thin churrus (sic) made from malawah, a layered fried puff-pastry bread, possibly the nastiest excuse for a cruller I’ve tasted. Clearly, the chefs need more time to work on desserts. Remember, this is just a first impression.

The check for our aggressive tasting has a sting. With items from $5 to just $22 it wouldn’t seem possible. But count two $15 cocktails, a $12 Compari-and-soda and two $14 glasses of red, and our dinner costs $340 for four with tip.

Even so, I might come back to try the merguez sausage burger with feta and the hanger steak with  pomegranate tahini. If only Combina weren’t such a long, torturous detour for me. I might leave it for the locals. Frankly, the evening’s reunion with Einat Admony has made me ravenous to return to Bolonat.

All photographs are the copyright of Gael Greene.