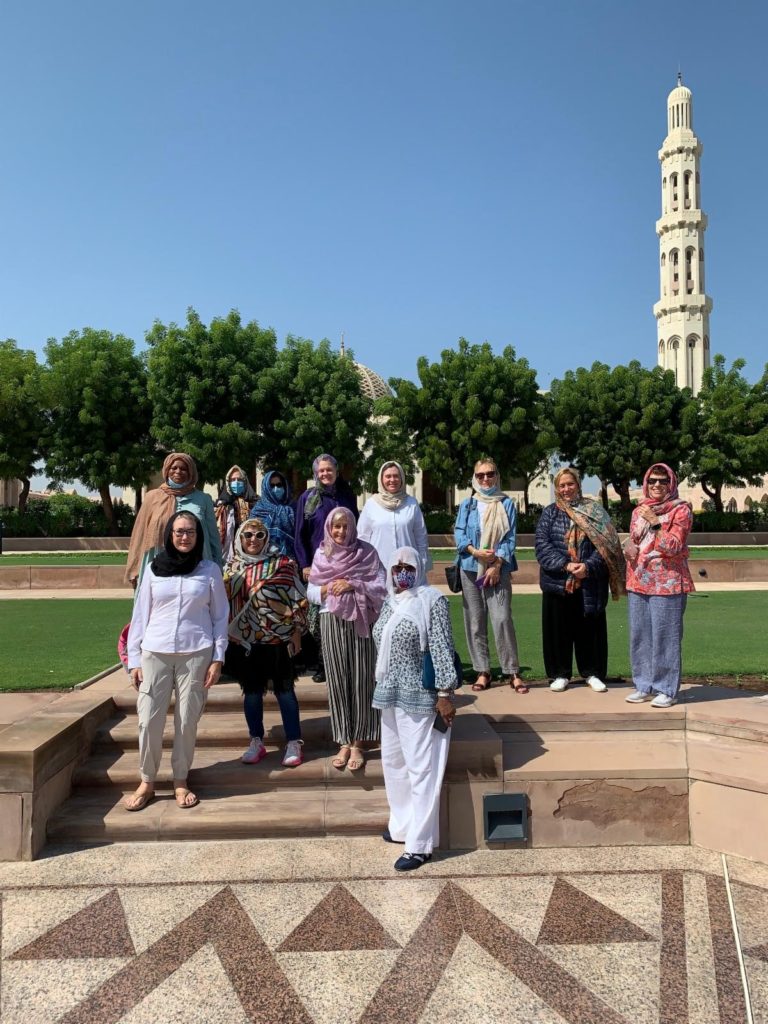 Yes, we survived an overseas three area trip with testing at borders, masking in public places, temperature taking and tricky Arabic electronic apps. We survived with a smile. I escorted our October 2021 women’s group to Dubai, Sharjah, Abu Dhabi and the Sultanate of Oman. We also went to Dubai Expo, the World’s Fair. Several areas have strict protocols and it was these protocols which were more intimidating then warmly welcomed.

Prior to the trip, we knew a negative PCR test no older than 72 hours was required to fly Emirates. It turns out the 72 hours for results is now reasonable. In fact, I stopped by a testing tent on Lexington Avenue and 60 Street yesterday and the PCR was FREE and results timely. Months ago, that PCR test would have been given on an emergency/exposure basis only and cost $300. Now it is available basically anywhere and in at most might cost $100. Here is a link to CVS testing sites nationally. Next, we did not know if we needed lab results in hard copy. Was an email with a PDF document ok?  Yes, an email was accepted for our flights; however we recommend a hard copy for the occasional bureaucrat with a fine tooth comb.

Now for that ubiquitous QR code in common use overseas for health information. Many states do not offer a QR code for vaccination histories. New York does; but if you live in a conservative state, good luck when a government requests it up front. For Dubai, we had to upload and fill in a vaccination history form which generated another dreaded QR code. When some in the group had trouble filling it out, we found they were rushing or auto filling parts of it. Boring… but in filling out forms online, take time. Some of the group were unfamiliar with QR codes, so another learning experience.

On arrival, most in the group said no one looked at the QR’s. We were disappointed, as we were now QR app ‘veterans’.

Smartphone companies announced they will offer an app that converts hard copy CDC’s to a QR code. In the meantime, just keep a photo in your phone. This week I filled in the Delta FlyReady app for an upcoming vacation. I learned that you could upload your CDC card to Delta who stores it in FlyReady. Where you put the image, don’t use a picture of a card; take a photo of instead. The photo will work; the picture will not.

Now check in at the airline; yes, the hard copy of the PCR test was glanced at and approved before we were allowed to approach check in desks. It was looked at a few times during the beginning of the trip entering museums, the famous Dubai Mall and other sites. Crossing the border to Oman, we had scheduled another test. Again, it was looked at for the duration there.

The rest of the electronic documents we told to get remained unfinished. Scary because of border crossings, where we thought they were needed. Worldwide electronic rules are brand new; even Europe is still wrestling with the Green Pass. We found happily broad acceptance of our paper cards. When we crossed into Oman, a separate country from Dubai (The United Arab Emirates), our nerves were on edge. Guess what? The electronic stuff was so new, it was not used. Staff at the border retyped our information into computers translated into Arabic. It turns out we were the first leisure group to cross into Oman in 18 months and staff was on a steep learning curve. No apps were examined, and we entered the old fashion way with someone stamping our passports.

Every hotel did take temperatures. It was 100 outside so good to know ours remained 98.6.

We had pre-organized testing for three borders; it was done in one of our hotel rooms. It took 15 minutes and results were emailed same day or early the next morning. All hotel front desks were aware of testing needs; they printed out our laboratory results without cost.

So yes, we survived to tell our story and had an amazing trip. Of all the so-called inconveniences, it was the electronic apps that were most worrisome. And now we know they were not even needed. Masking was annoying and was needed. Fun and excitement was there and desperately needed.

Please ask me if you have questions about borders/testing/masks/vaccination cards/ app/ and documents. I feel like an expert until next time when it all changes again.