This week, I’m taking a break from writing about traditional theater, which generally incorporates actors on a stage, a story performed and an audience seated in the dark. Instead, I’m going to gush about a different type of theatre: culinary theatre.

This stage is a sleek and beautiful one complete with cooking range and overhead video screens to capture the food cooking happily on the stove, and the actors are world class chefs, instructing an awe struck audience about their methods and tricks of the culinary trade. 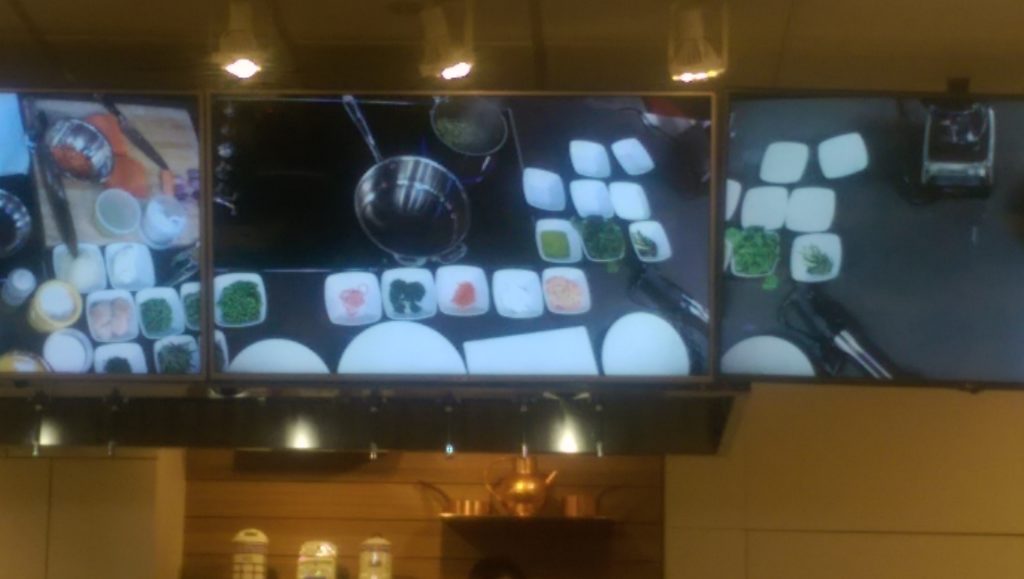 ​I had the pleasure of being an “audience” member at the beautiful De Gustibus Cooking School, a hidden gem on an upper floor of Macy’s Herald Square. Yes, you must negotiate the shoppers at the world’s busiest store, head to the elevator and disembark on 8 to discover this location where rock star chefs explain their inner secrets while preparing full meals; each dish replicated in the gleaming interior kitchen by sous chefs. We, the audience, get to indulge in amazing courses paired with incredible wines.

Now, this is my kind of theatre! Food, wine and chef secrets, all in one place.

And the person prodding each featured chef for inside information is culinary expert and DeGustibus owner and director, Sal Rizzo. Sal is a bundle of personality and clearly loves the food arena. He knows every chef, every restaurant and every place to go for the latest best offering. A font of food information!

The night I went, the executive chef from Aureole, Marcus Gleadow-Ware, was center stage.

The delicious menu items were all paired with appropriate wines: Tullia Prosecco, Ophelia Chardonnay and Mauritson Zinfandel. It was simply an amazing meal that we would have paid exponentially more for had we dined at Aureole.

DeGustibus Cooking School provided one hell of a meal with entertainment courtesy of Sal and Chef Marcus, assisted by a super attentive staff, all equaling a night of theatrical food heaven.

DeGustibus presents these evenings every night of the week. As an example, coming up on Saturday June 6, Mia Van De Water from the stunning North End Grill, and in August, Joy Pierson from the delightful vegetarian restaurant Candle Cafe.

An evening at DeGustibus is a great gift for couples celebrating an engagement or wedding, a wonderful way to herald a graduation, or honor dad for father’s day, a birthday present, or a treat for yourself.