I am very happy to say that my final theatre column for 2016 ends on an excellent note. Today I am pleased to write about two innovative, unique and special musicals.

By now, you must have heard the commercial for Dear Evan Hansen on the radio, and the very catchy song that is featured in the spot.

This ad certainly does its job to incite curiosity, and bring people in to the house to see the show.You may not know what you are in for, but I can tell you, you will be on an emotional ride.

The story showcases Evan Hansen, a disenfranchised, lonely, mainly ignored and sometimes bullied teenager, and circumstances that occur providing him with an opportunity to help others and become embraced by a family.  Finally, Evan fits in, and feels like he matters…however, the reason for this is based on a lie. Although there are plenty of reviews written explaining the story, I prefer not to tell you much more because I just want you to take that bit of knowledge, and my recommendation to get tickets, soon.

What I will tell you is that the music is excellent, the lyrics haunting, and the performances outstanding. Ben Platt, who plays Evan Hansen, is so enmeshed in the role, it is hard to determine whether he is indeed the character or performing it. I question whether it is good for his mental health to be so embedded in a role, but it does provide a cathartic experience for the audience (and for him, I would imagine.) You will hear a lot of throat clearing and sniffles, if not down right sobs emanating from the audience. There is something very compelling about a character who is “on the outside looking in.” Haven’t we all, no matter how accomplished, at some point in our lives, experienced that very feeling? 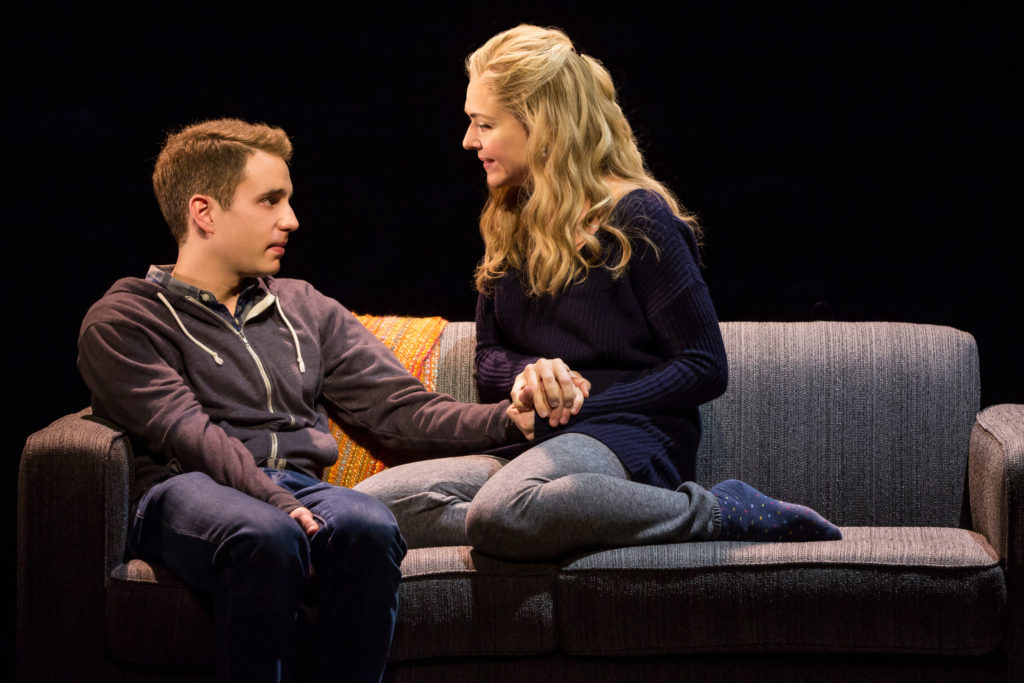 With a sensitive and sharp book by Steven Levenson, and music and lyrics by Benj Pasek and Justin Paul, you will find yourself just loving the story, the songs and the way they are  performed. Beautifully directed by Michael Greif, with choreography by  Danny Medford, and set design by David Korins, the creative team is seasoned and powerful.
Along with the fabulous Ben Platt in the cast, is the equally fabulous Rachel Bay Jones, Laura Dreyfuss, Kristolyn Lloyd, Michael Park, Mike Faist, Will Roland and Jennifer Laura Thompson. 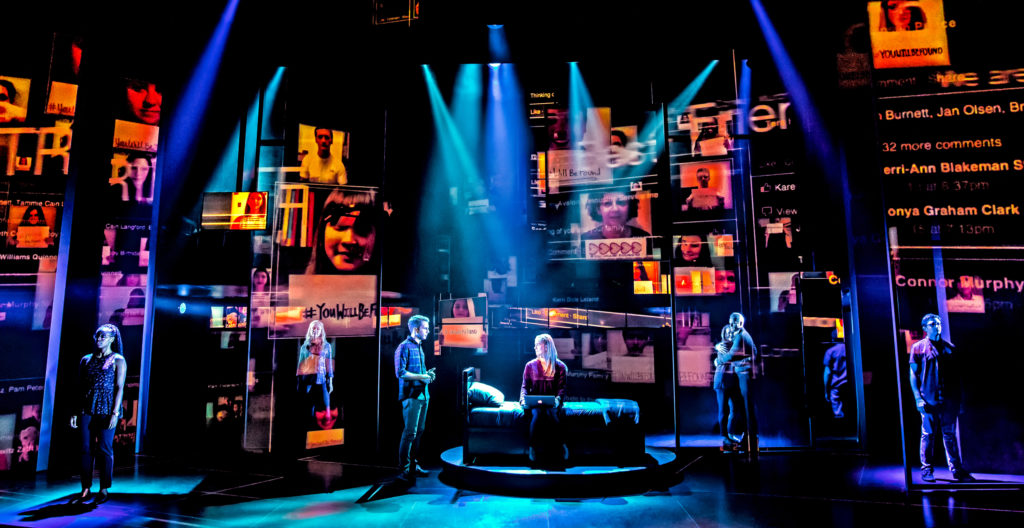 Dear Evan Hansen is ripe for all kinds of Tony nominations next Spring, and I already predict it will win best musical. The buzz on the show when it was off-Broadway was huge and I believe it is poised to be the big hit of the Fall season. So, go, see the show, and you will understand.

Another great and innovative musical, which just opened on Broadway, is over at Circle in the Square. In Transit is so “New York,” so funny and  completely different from any musical you have ever seen before…because there is no orchestra, no musical instruments, just the human voice and amplification from a beat box. And guess what? Because the layering of voices and harmonies, with the help of the percussion from the beat box is so rich, you don’t even miss the instruments.

In Transit follows the lives of 11 New Yorkers who, of course, take the subway to get where they are going literally and metaphorically.  Along the way, the challenges of  New York City living, as well as the challenges of taking the subway, are hilariously depicted. Each character is richly created, as are the relationships that unfold.

In Transit’s book, music, and lyrics are written by a team: Kristen Anderson-Lopez, James-Allen Ford, Russ Kaplan and Sara Wordsworth. Directed and choreographed by Kathleen Marshall, with a fabulous set by Donyale Werle, In Transit is another two-thumbs up. If you are a New Yorker, and if you have ever set foot in a subway, this show will absolutely resonate for you.  (Even Internet sensation, “pizza rat” makes an appearance in the show.) And if you’re not, you will still love the clever way the stories are intertwined, the fabulous voices of each and every cast member and the uniqueness of this musical.

Starring a host of incredibly talented performers,  the show is narrated by the character “Boxman” who does amazing things with his voice, a microphone and a beat box. In the performance I saw, it was Chesney Snow, who has astounding talent. Boxman, along with the subway that rumbles in and out, is the glue that holds the piece together.
Fun, sweet, surprising, and oh-so-New York, be sure to pick up your MetroCard and get over to Circle in the Square for this unique musical. http://www.intransitbroadway.com/ 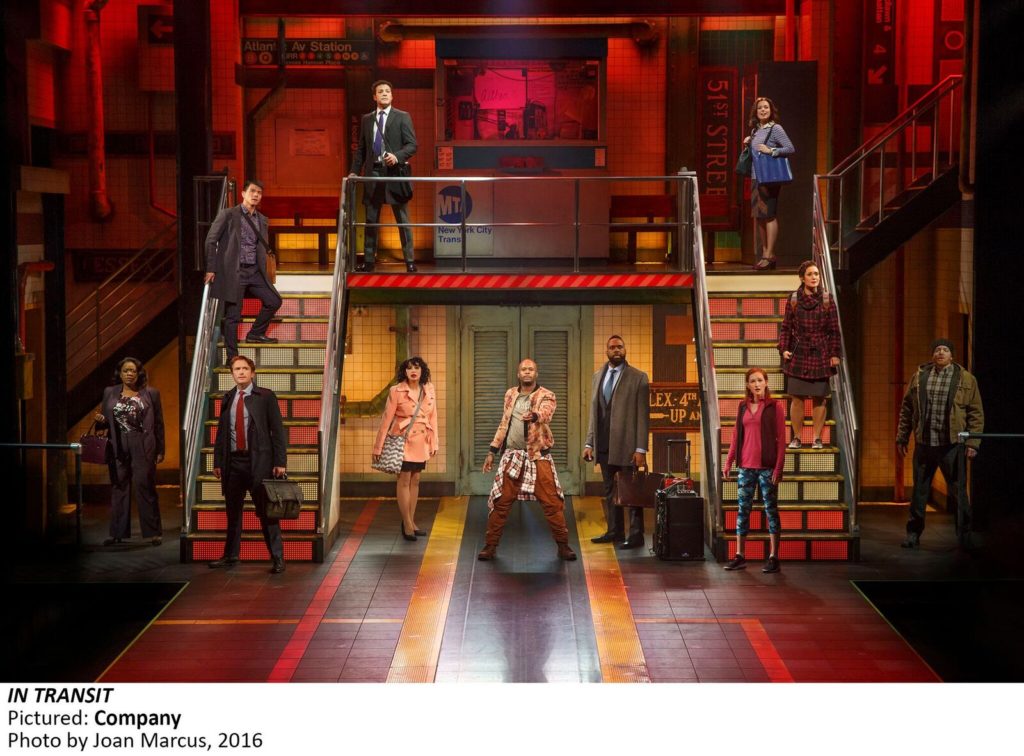