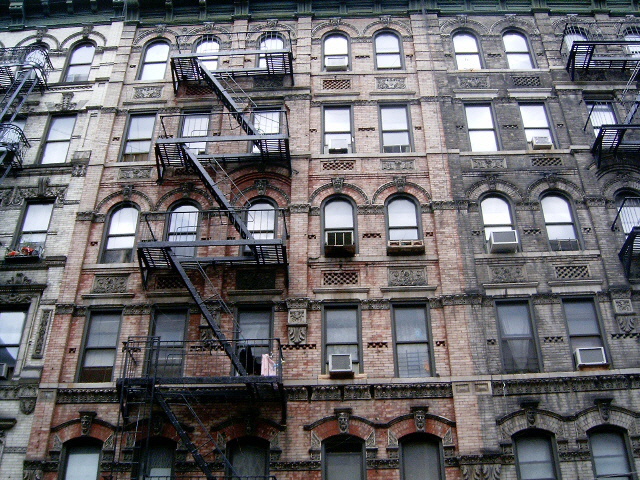 I recently read a book called 97 Orchard Street, a tour through the homes of some of the immigrant families that once inhabited the building that is now New York City’s Tenement Museum. This book was unique in that it looks at the occupants’ lives through the food they ate. The premise is that the immigrants’ food was a powerful connection to the homeland they missed. 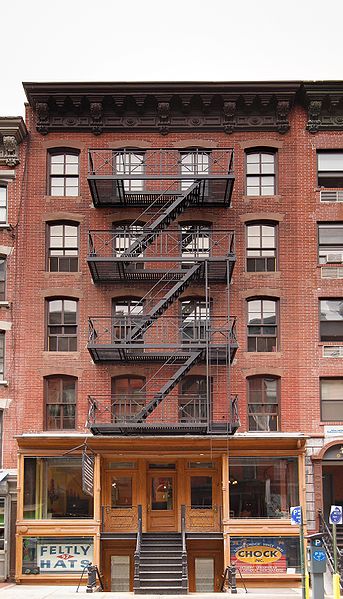 I’m up for almost anything about food and this was a fascinating read, with unusual recipes too. But it reminded me of the somber past of New York’s tenements, the community they spawned, and the style of these buildings—some of which are quite beautiful despite their notoriety.

If you want to see these buildings, take a stroll down Orchard or Delancey or just about any street in the Lower East Side. The real center of the tenement neighborhood was Five Points, the intersection of Mulberry, Little Water, Anthony, Cross, and Orange. These streets were redirected and renamed; only Mulberry still exists under its original name.

The difference between a tenement and an apartment building was the location (undesirable neighborhoods, often close to tanneries or slaughterhouses), its inhabitants (recent immigrants), and the number of families in a single building (a lot).

In the 1840s, the first decade that saw significant immigration, New York City’s population increased by an estimated 60 percent; and kept growing. Different ethnicities came roughly in waves, though many groups came at many different times. As one group prospered, they would move out only to be replaced by the next wave.

The original tenements were built in the early 1800s on lots that were typically 25 feet wide and 100 feet deep. These initially held single family homes, but as uptown living became more fashionable, residents moved north and immigrants poured in. The tenements were sometimes newly built, other times simply expanded versions of the existing house.

Typically made of brick, the average tenement was 5- to 6-stories tall and occupied almost the entire width of the lot. That effectively eliminated any ventilation on either side of the building.

The architectural style common among many of them is basically Italianate, which referenced the symmetrical, graceful villas of Northern Italy. It is characterized by a low-pitched roof, wide cornices with decorative brackets or other embellishments, tall windows with detailed lintels and prominent sills, and a stoop with railings.

There was often some sort of retail establishment on the lower floors—perhaps the resident of one of the apartments ran a small restaurant or store. The least desirable apartments were the ones on the top floor—think Stairmaster while lugging children, groceries, and water.

There was no running water, of course. Privies were located in the back of the building—how did those poor women ever manage? Fresh air was at a premium. Lighting was almost nonexistent. There were fireplaces for cooking, but it was cold in the winter and very hot in the summer.  In short, these were not comfortable places.

That doesn’t mean life there was without pleasure. There was often a lively community within the building and among the neighboring buildings. Ethnic groups tended to live close together to enjoy the company and traditions of fellow countrymen. And tenements were not necessarily dirty and disease ridden; many recent immigrants took great pride in the cleanliness of their new home.

Next time I walk along Orchard Street, with its fine restaurants and stores and fashionable apartments, I’m going to say a quiet tribute to the old families who huddled together in those former tenements. They struggled and saved and tried to make it in a new country, if only for the sake of their children. What courage.

Wendy Talarico is an award-winning journalist with more than 30 years of experience as a writer, editor, and public relations consultant. Ms. Talarico was a senior editor at Architectural Record and This Old House. She was also the Web editor at Metropolis Magazine. She is the Architectural Services manager for W.R. Meadows, a manufacturing firm.