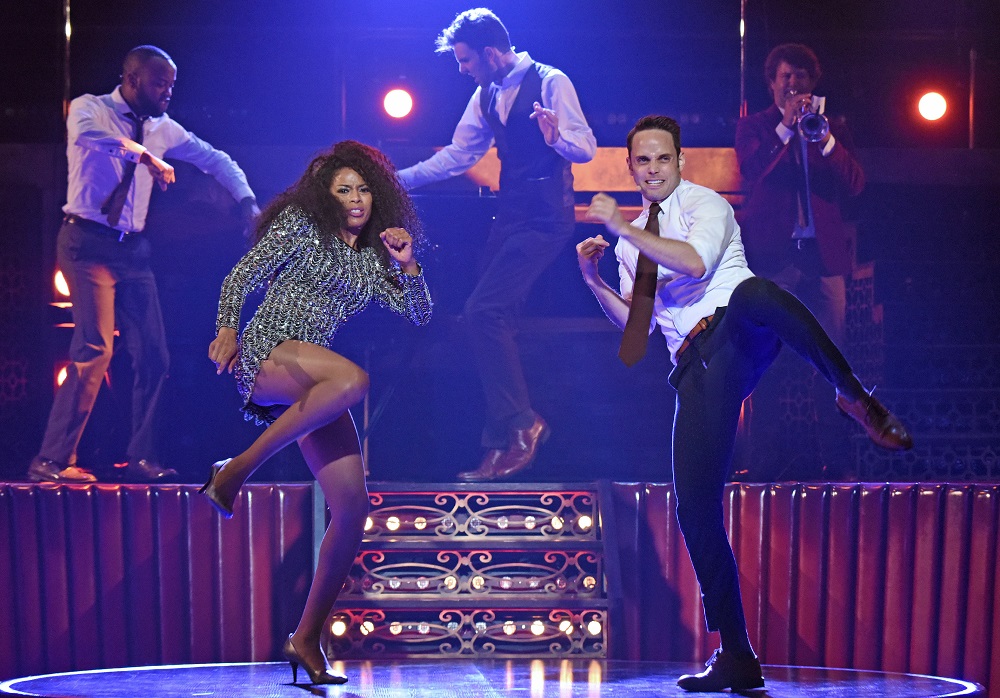 Dionne Gipson and Justin Mortelliti. All photos by Kevin Parry

All I can say is get ready to be blown away. This theatricalized cinematic hybrid entertainment-on-steroids comes at you with all the force of a loaded gun, if the stage was the barrel, the singers were the bullets, and the Scorsese signature plot twists were the triggers. It’s one showstopping sequence after another woven together with a modern sensibility that hits right on trend.

Your first holy-shit moment happens the moment you walk into the theater and see how Matt Steinbrenner and Kyle Courter have transformed the Wallis stage into a 4-level Vegas-style nightclub. A large round leather booth and table form the centerpiece of the main playing area with additional club seating for audience members flanking the 2 middle sections. Curved staircases on each side of the stage connect the tiers and create a sweeping visual that makes the club look like it is a hundred feet tall. They are also integrated beautifully, and with quite a measure of stylish surprise, into Dan Efros and Michael Berger’s lighting design.

I can imagine how detailed the light plot for this show must be to achieve so many wow moments in this Vegas showroom. It’s a given that Efros and Berger would excel at creating the excitement of a rock concert but what is even more fascinating is the way they use light to give the illusion of depth and warmth. The show looks luxe but it just as easily trades its burnished glow for the stark grit of a crime drama whenever it needs to. 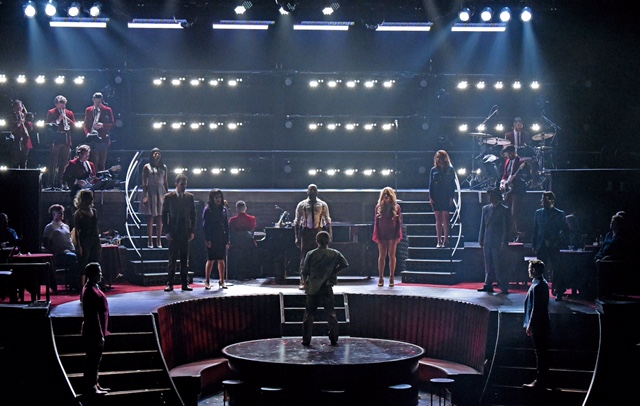 The cast of For The Record

Then For The Record: Scorsese’s creators (executive producer Shane Scheel, director Anderson Davis, and music supervisor/arranger Jesse Vargas) drop in an outrageously talented 7-piece band lead by Vargas and a ferocious cast that can quite literally blow the roof off with their powerhouse vocals. It’s a recipe for success right out of the box.

Like previous For The Record performances, the 2-act show focuses on the films of an iconic director such as Baz Luhrmann, Quentin Tarantino, or John Hughes and weaves together scenes from across their body of work into one story. This one nails Scorsese’s brilliance and also recognizes the way he used music to underscore his characters’ personalities and their pivotal scenes. The stage production brings together some of his most memorable creations like Sam Rothstein (John Lloyd Young) and Ginger (Carmen Cusack) from Casino, Karen (Pia Toscano) and Henry Hill (Zak Resnick) from Goodfellas, Iris (Lindsey Gort) and Travis Bickle (James Byous) from Taxi Driver, Jordan Belfort (Justin Mortelliti) from The Wolf of Wall Street, and Jason Paige who plays Frank, a composite of Joe Pesci’s Tommy DeVito from Goodfellas, Nicky Santoro from Casino and Jack Nicholson’s Frank Costello from The Departed. Rather than mimicking the original film characters, however, the actors use them as a point of departure, although Paige eerily channels his characters’ humor and brutality with chilling exactitude. The choice allows for adjustments to be made to fit the current cast. For example, Byous’s Travis seems younger and more innocent that De Niro’s but when he makes the change to haunted vigilante in his unforgettable revenge scene, it is no less believable.

As Iris, Gort takes Jodie Foster’s little girl prostitute and turns up the volume to create a sexier, more worldly, but equally as damaged young woman. She’s got that slit your wrists kind of voice that hits you in stomach when she sings. It’s full of pain, and tears, and dirty martinis. She’s a little bit baby doll and a little bit Janis Joplin rolled into one. Her bluesy version of B.B. King’s “The Thrill is Gone” with guitarist Erik Carlton backing her up is one of the most vulnerable scenes in the show. 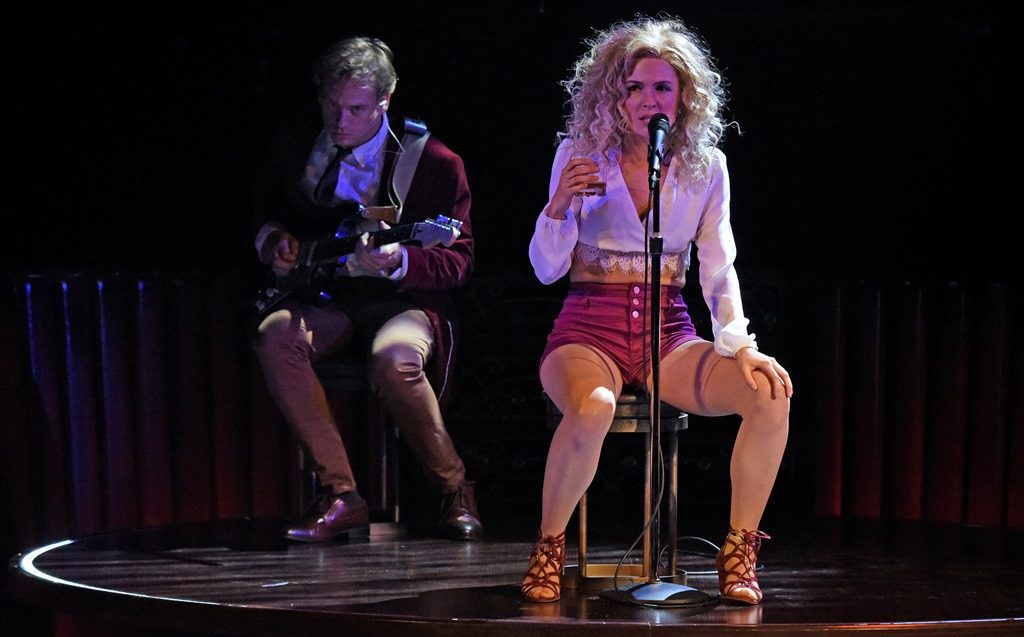 Paige turns John Lennon’s “Well, Well, Well” into a grinding showstopper. There’s a whole world in that song and he wrings every ounce of desperation and defiance out of it. Cusack takes her long last walk of drunken, drugged-out shame to Al Dubin and Harry Warren’s “Boulevard of Broken Dreams” and creates an indelible image stumbling through her final crazed moments. Equal parts torch singer and tortured country star, she also brings down the house with her version of Patsy Cline’s “Sweet Dreams” and a reprise of “I’m Sorry” sung earlier by Toscano, one of the best female vocalists  to come out of American Idol. 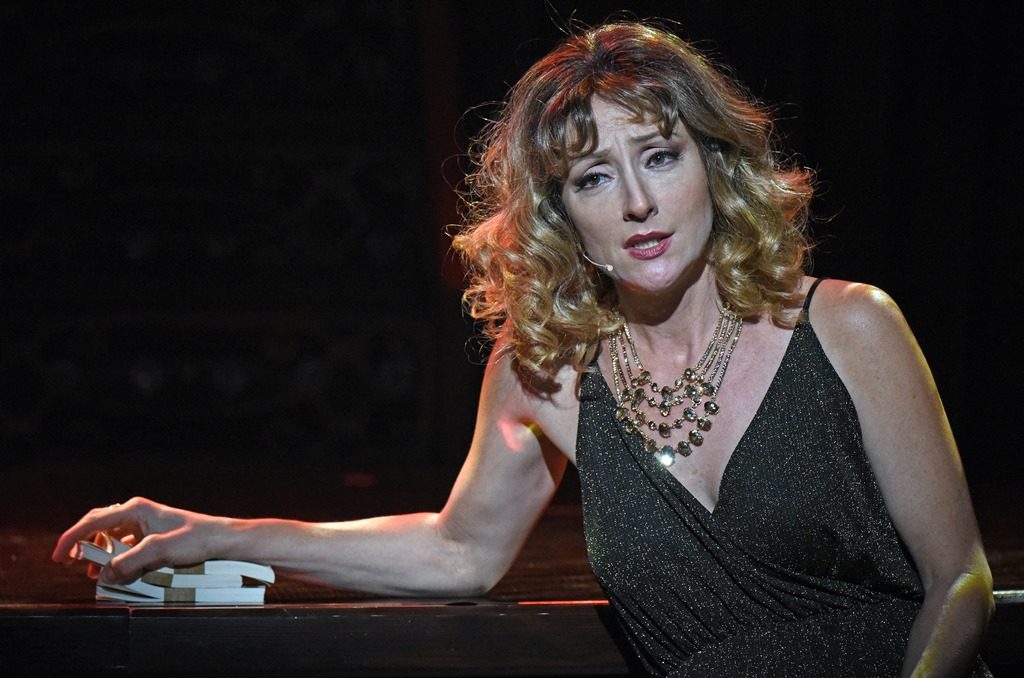 Toscano’s voice is a perfect match for the ‘50s and ‘60s songs that represent the challenges of many of the wives in Scorsese’s films and her lush vocals resonate with emotion. She and Resnick also recreate the unique comedy in Karen and Henry Hill’s over-the-top marriage, which director Davis positions at just the right moments to break up the show’s more violent scenes. The production is well-calibrated and as an audience member you never feel overwhelmed.

Mortelliti and Resnick’s party boy pace is fast and funny. Their hilarious Lemmon Quaalude scene mops up the stage and “My Way” is reinvented with a driving rock beat. Young functions as the anchor point for the ensemble. He takes his trademark Jersey Boys cool and adds intensity to standards like “Stardust” and “The ‘In’ Crowd.” Choreographers RJ Durell and Nick Florez stage a tango for Young and Cusack over the exchange of a twenty dollar bill (or a hundred, who knows?) that is slyly effective. You can see their savvy touches all over the production which add a level of showmanship to the performances that deepen their impact. 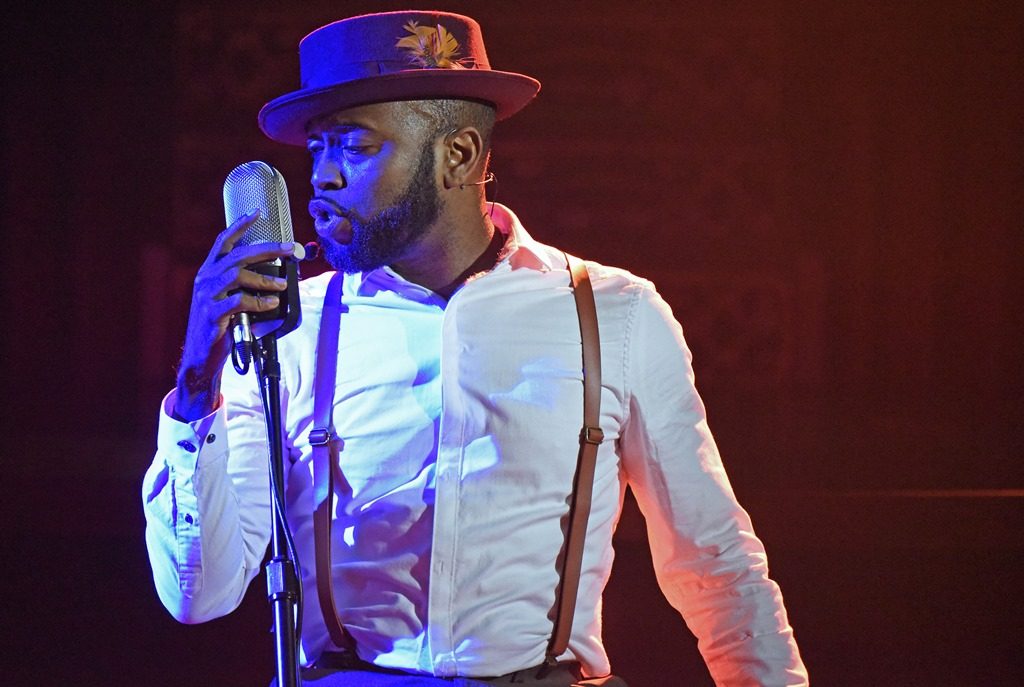 As a kind of everyman observer who pops up throughout the performance to comment or accompany the onstage action, B. Slade (Stacks) is the silver bullet that subtly connects the audience with the actors. By the time the show gets to his “House of the Rising Sun” epilogue, we’re primed for the incredible rage, halleluiah fever, angelic push, and righteous indignation he wrings out of the demanding finale. It’s the type of mega-spectacular number that is the only fitting way to end this kind of a major undertaking.

For The Record has come a long way since its humble beginning six years ago in a small cabaret space in Los Feliz. Since then the company has expanded and brought shows to New York City, Las Vegas, the Montreal Jazz Festival, Norwegian Cruise Lines, and soon to television in partnership with Dick Clark Productions. They have taken the theatre cabaret act to a whole new level, reinventing it, and positioning that new form in such a way that it will undoubtedly grow audiences across generations. That’s an exciting prospect for the future of the art form itself.

In addition to the actual performance, the Wallis has extended the Scorsese feel of the evening by adding a number of pre and post attractions for theatregoers. Come early for pasta from the Prince of Venice Food Truck and themed-cocktails at The Bar at The Wallis. Entertainers will roam the courtyard and films like Fellini’s 8½ and Rossellini’s Paisan will screen outdoors. You can also stay after the performance for a post-show hangout at The Bar and on Thursday, Friday, and Saturday nights enjoy music by For The Record artists and other performers.