Frozen, the Broadway musical, can melt the coldest heart

I was so excited when I learned that Frozen, the highest grossing animated film of all time, was being made into a Broadway musical. Last year, when traveling internationally with a lot of time on my hands, I saw that the blockbuster was a movie selection on the flight, and although  geared toward little ones, I thought I would give it a try. After all, “Let it Go” was a hit song from Broadway darling Idina Menzel, so why not? Turns out, I loved the film and was surprisingly moved by it.

Cut to the new Broadway musical and my anticipation for seeing a staged version of this arctic tale about two Royal siblings separated by the damaging and unconfined powers of the older sister, and the younger sister’s pursuit of her love. (How many of us can identify with the underlying theme of this story?)

Well, the night to see the show finally came, and lo and behold, I was informed that, due to illness, one of the principals, Patti Murin, who plays the role of Anna, would be out for that performance, and her standby would fill in.

Most might be disappointed, but I actually love it when I have the opportunity to see a standby perform. I am always rooting for that performer, because the pressure to be excellent is intense. I remember when I saw the standby for Josh Groban in the amazing Natasha, Pierre and the Great Comet of 1812. He was incredible and I couldn’t imagine any one else in that role.

Well, Aisha Jackson, stepping into the role of Anna for Ms. Murin, did the same. My heart was in my throat when she made her entrance, imagining her nervousness minutes before taking the stage. She did not disappoint. It was the first time she performed the role since Frozen had opened. Aisha, by the way, is African-American, so it was a very special night to see another step toward diversity in casting on Broadway.

And that’s how my Frozen journey began. It was simply wonderful.

I was so curious. How would the show’s creators provide the full Frozen experience that an animated film can?
They did. The set, the costumes, the lighting suggest the frozen tundra, the frozen people, the frozen energy that Elsa generates, in extremely clever ways. This version of the story delves into  the struggle between darkness and light, the dastardly thirst for power and the generous warmth of compassion. 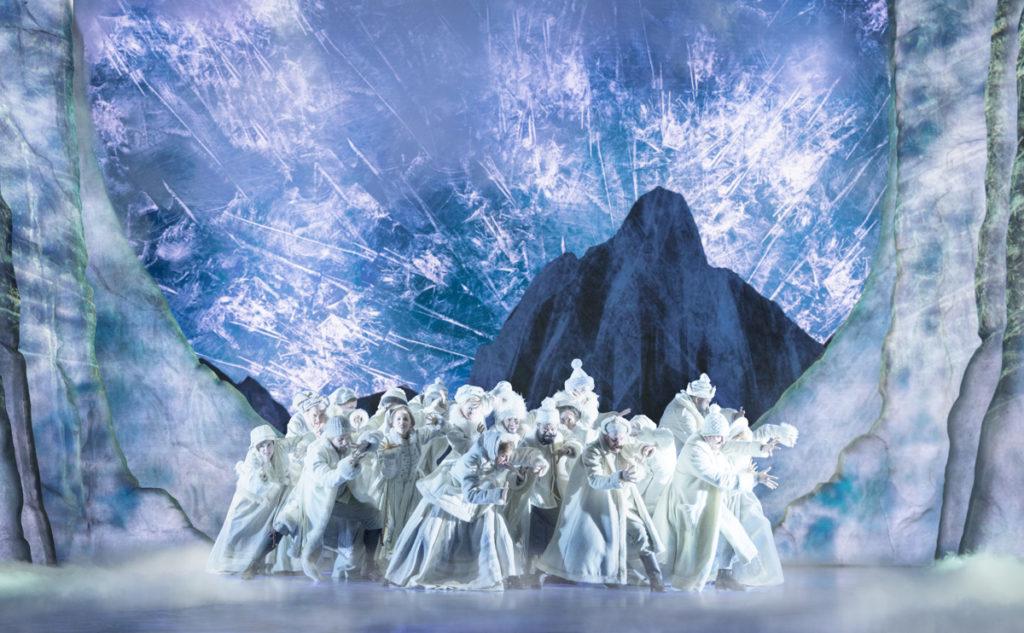 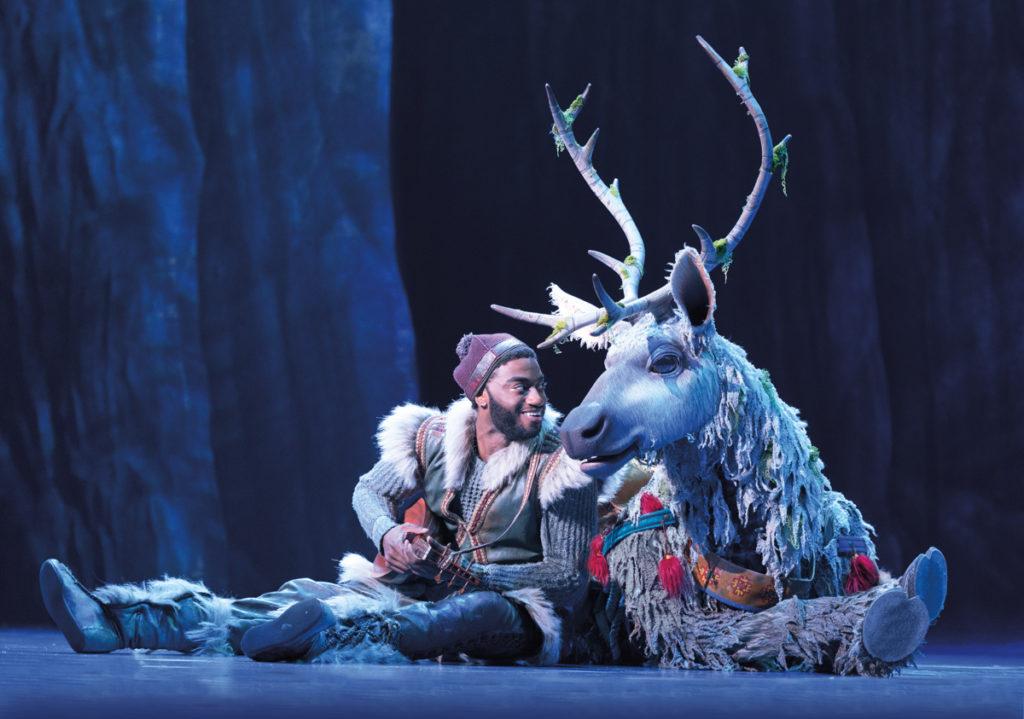 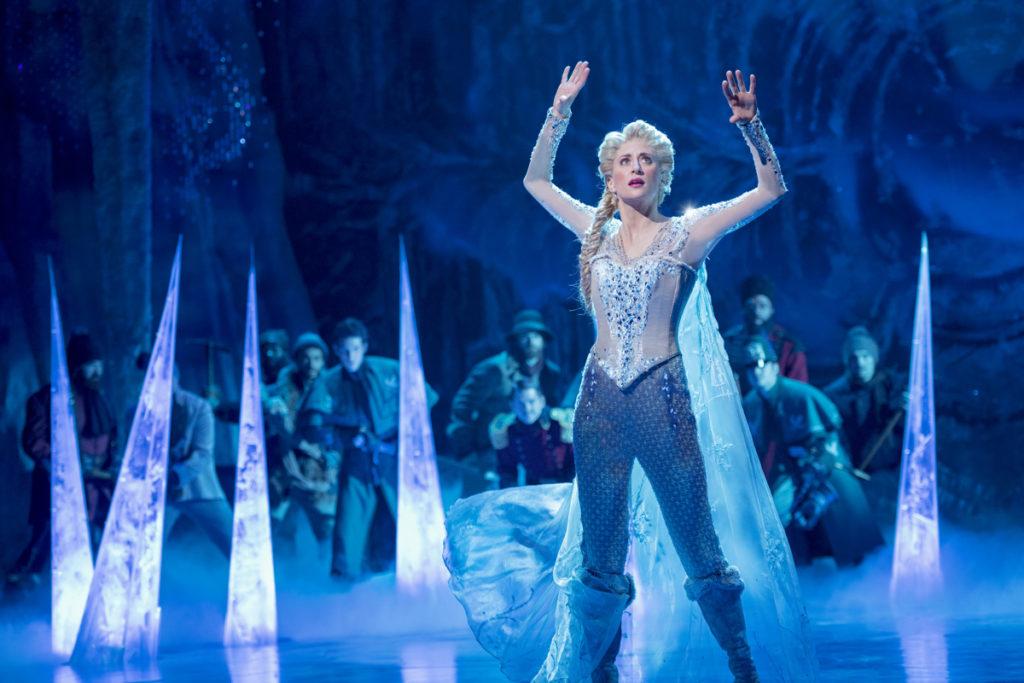 Caissie Levy as Elsa is perfection, as are the actors playing young Elsa (Ayla Schwartz) and young Anna (Mattea Conforti.) Keep an eye out for these two young performers. They are fabulous.  John Riddle is a terrific Hans. Greg Hildreth, who plays Olaf, is attached to a huge Olaf puppet, and soon enough, you believe that they are one and the same. Sven, the life size reindeer that is an integral part of the action (played by Adam Jepsen, the night I saw the show), is so convincing in his animal-like moves that you believe he is a real creature. Jelani Aladdin is a super Kristoff,  and Robert Creighton, a weasely Weselton. Spectacular scenic and costume design by Christopher Oram and lighting design by Natasha Katz create the outstanding environment.

With music and lyrics by husband and wife team Kristen Anderson-Lopez and Robert Lopez, and book by Jennifer Lee, the film truly comes to life on stage in a complete  and deepened way.
Choreographed by Rob Ashford and directed by Michael Grandage, this is a show that, when it ended, I said, “I can’t wait to see it again.”

No question about it. Frozen is a bona fide Broadway hit, and will, I’m sure run for years to come. Think Wicked in Norway. There’s the misunderstood Elsa, who has to part from her beloved younger sister, Anna (who has the best disposition ever), because of her mysterious powers, and the incredible lengths Anna goes through to chase after her.

Although Frozen, the film is intended for a young audience, this stage version is truly one for all ages, as it conveys a universal message. The power of unconditional love supersedes any other. Yep, Frozen is a winner, a keeper and a big WOW.  http://frozenthemusical.com/