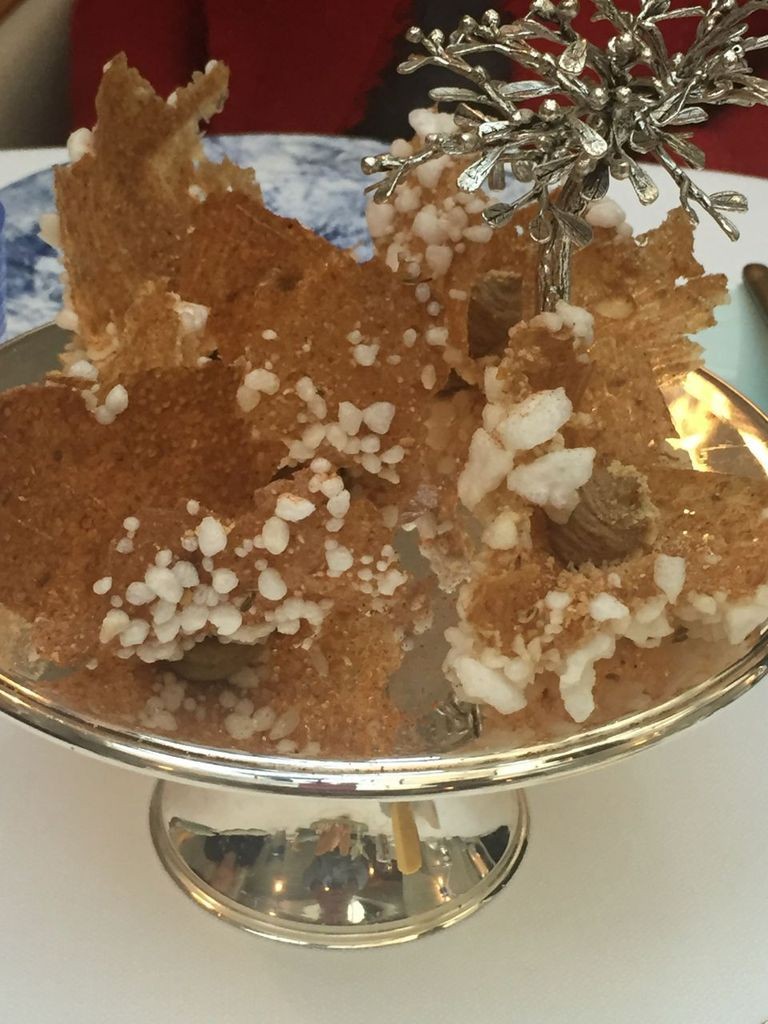 The days grew more intense, more demanding as our departure neared. The simple little bistros I thought I’d revisit in my ten-day escape to Paris got cancelled as time compressed. A quick sandwich on the Rue de Buci and window shopping on Rue Jacob – I was seized with a desperate need to buy something.
Baccarat sconces, cubist ceiling, staff in tight-fighting navy suits, women with buns.

Certainly I am totally opposed to a fancy tasting lunch on my last day in town. Dinner, perhaps. But here we are, the three of us at Jean-François Piège’s crankily uncommunicative and impossible to book Le Grand Restaurant. Fancy, stuffy, popinjay perky, precious. There is a 190 Euro “Debut of Autonne” tasting and a 245 Euro “Signature” event, too. Ours will be 84 Euros (the bargain choice). I am sure I will despise it. 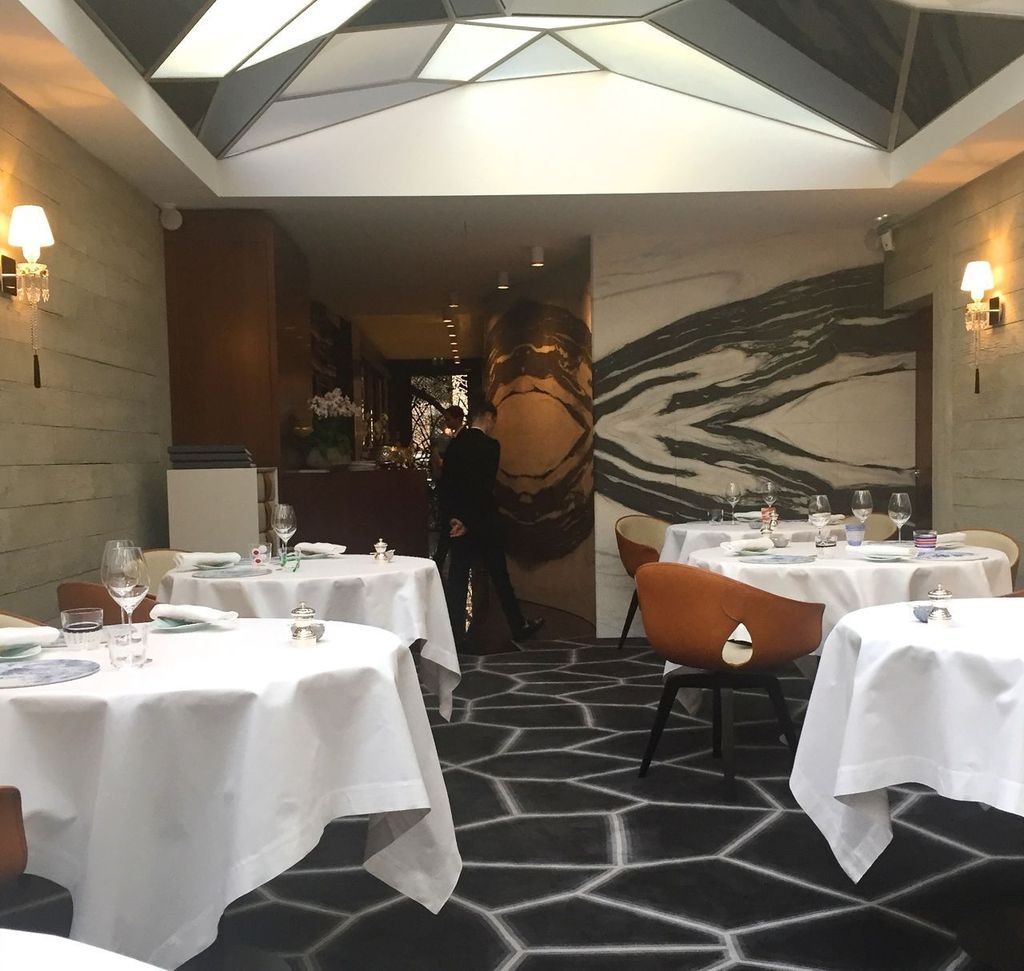 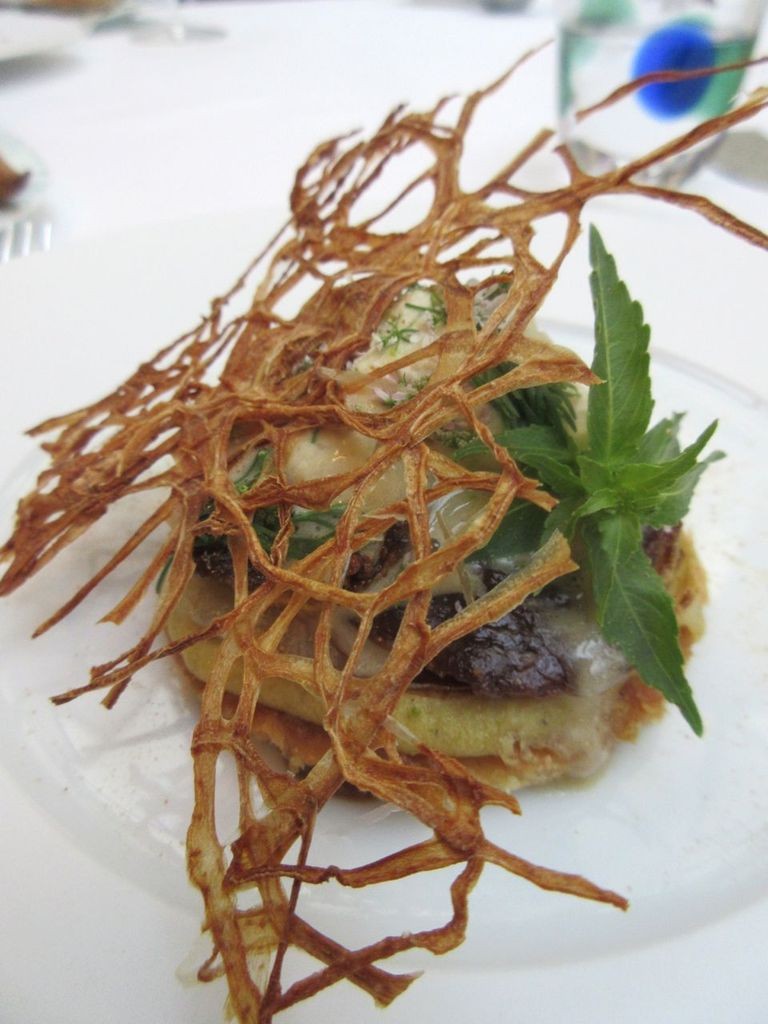 The tourte of sweet onion with herring sounded awful. But on the contrary.

Crisp, inflated potatoes soufflées dabbed with caviar atop a shellfish cream and silvers of cèpe. A creamy tourte of sweet onion, herring and crushed praline.  A silver egg mirroring the room with the natural gel of langoustine at the bottom and more caviar. 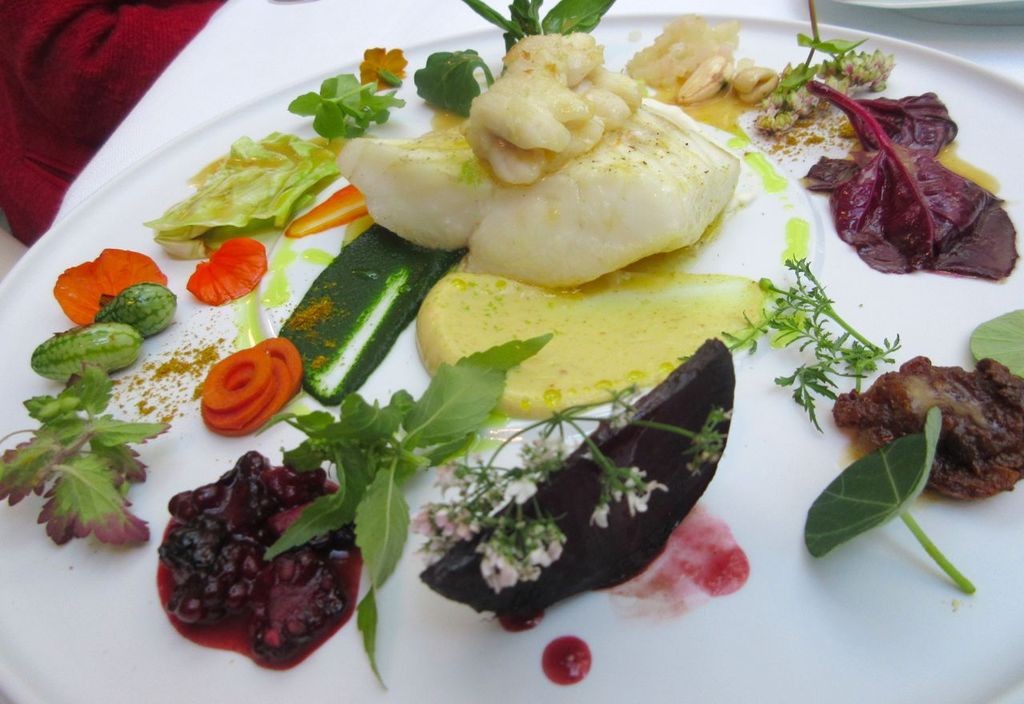 The turbot is perfectly cooked; the circle of flowers and herbs is better than Fashion Week.

Two of us share a large veal chop cooked rare over nutshells (presented raw in its smoker for our approval, or maybe edification.) It’s meaty and fine, with more cèpes, raw and cooked, as is the creamy walnut mousseline spooned alongside. 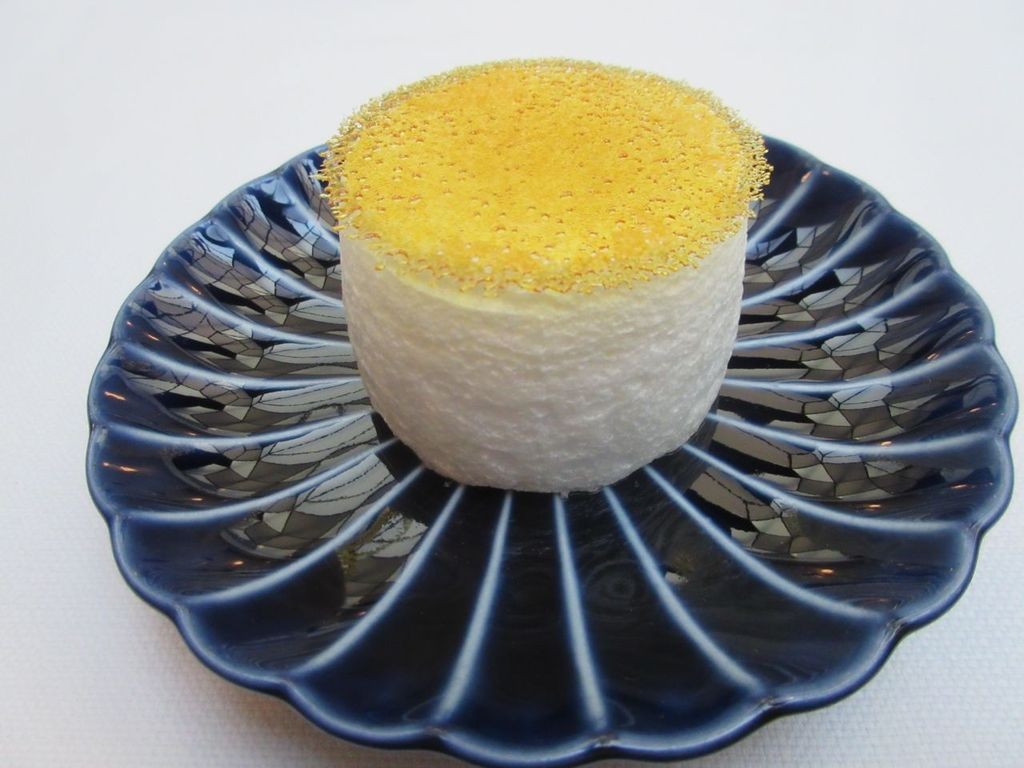 A bang with the spoon unleashes the sweet pastry cream river inside this floating island.

My friend Lauren’s turbot stops conversation dead. Decked out like a nouveau riche matron wearing everything in her jewel box, except here everything is a leaf, an herb, a flower, a berry or a nut with a puddle of lime curry.
After a rondelle of floating island, its cascade of crème anglaise released by the spoon, a parade of desserts arrives – I did confess that my wish to be anonymous has not been honored, didn’t I? There are fraises des bois, raspberry snow, flouve ice cream (a flower used in perfume), an oval of Perrier sorbet, and an adagio in almond milk. 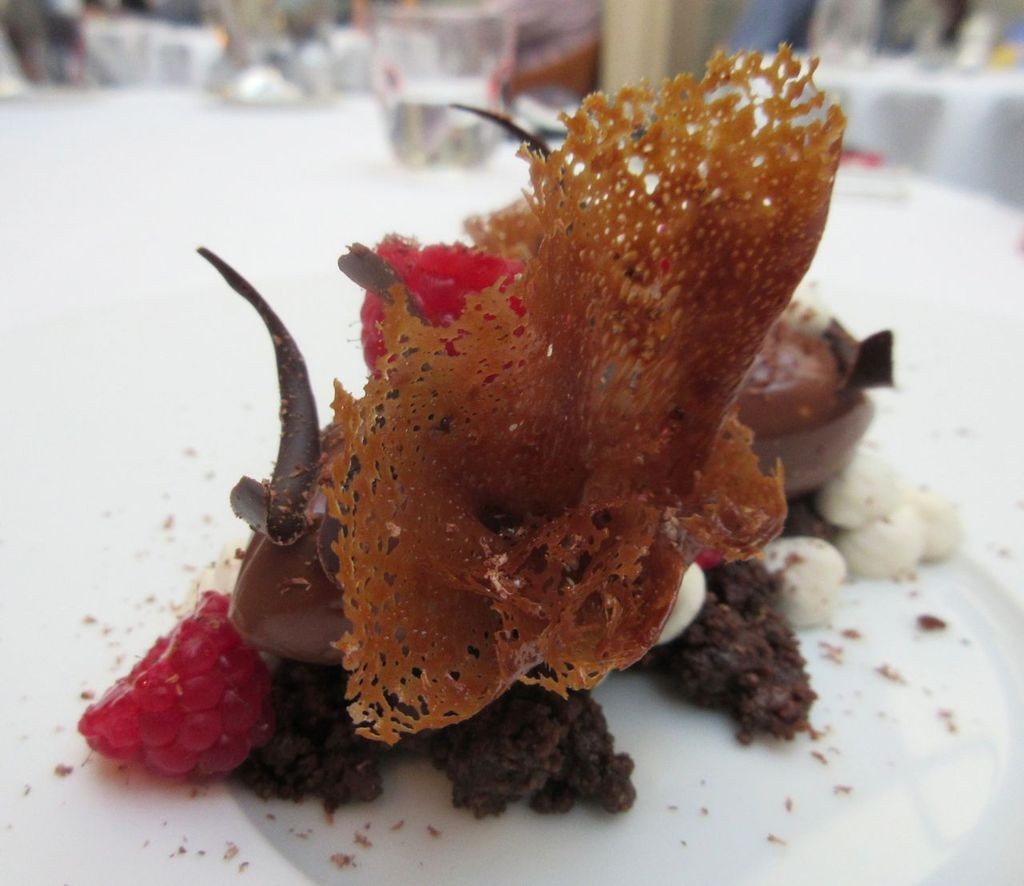 A quartet of desserts includes this chocolate and raspberry confection.

Then comes a wooden mystery box to unlatch, revealing a pudding of bergamot (another essential of perfumery) at the bottom of stone cups and stone spoons to eat it with. The cask is trundled away and the table is bare when yet another youthful server sidles up and suddenly smashes a chocolate ball on the table, releasing candy, chocolate and fruit gels.

That last act, yet another house add-on to our 84 euro menu, leaves us giggling and nibbling – the gel is cold and chewy. Was the ball frozen? There are veteran connoisseurs who have not admired Chef Piège’s efforts in the past and warned me I might be disappointed.  But I was neither drunk nor drugged, so you’ll just have to take it from a serial eater who’s lost patience with egomaniacal tasting, that this one is worth courting whomever you know with connections to get in. Le Grand Restaurant de Jean-François Piège 7 Rue d’Aguesseau, 8th 33 1 53050000
***
Loaves and Parsnips 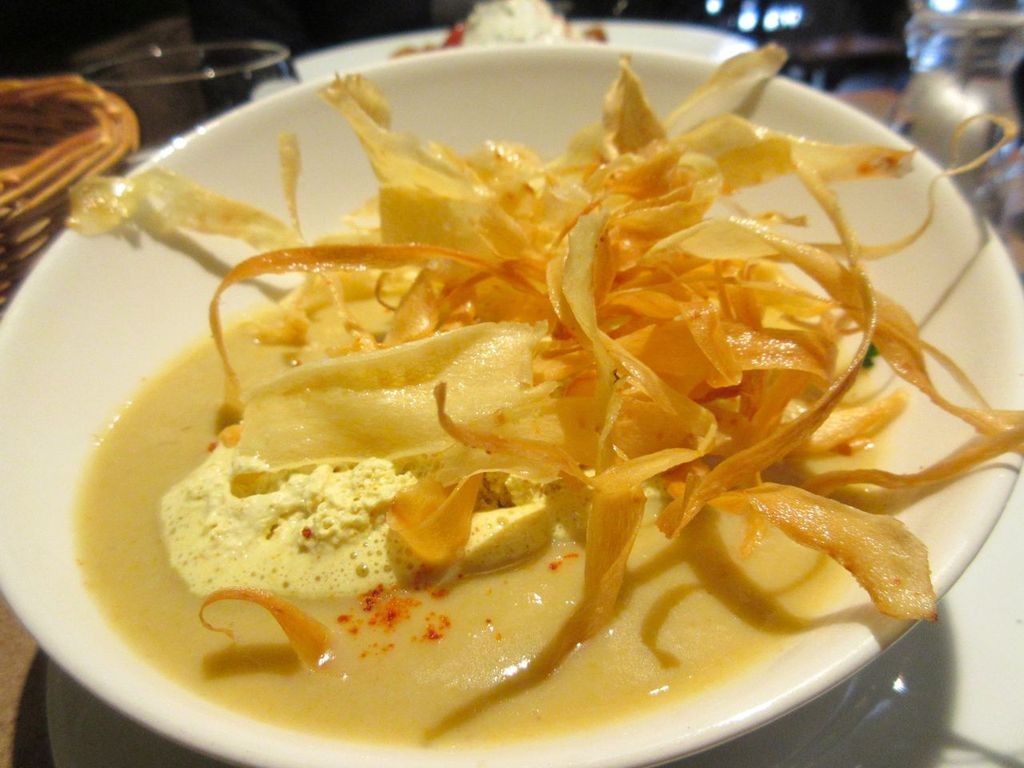 The soup of the day is a parsnip porridge with fried parsnip crisps.

I cherish fond memories of the legendary Lionel Poilâne, and his wife Ybu (we lived in their guest room once for longer than they anticipated), and will always think of Rue de Cherche Midi as the street of Poilâne Bakery, run now by his daughter Apollonia. But today my friend Yanou Collart, the diva publicist of Paris, is suggesting we take time for lunch near the foot of Cherche Midi at La Bien Décidé, a small bistro owned by Gerard Depardieu, the former French now Russian actor, whose grand villa rises behind a walled garden on the same street as well as his fish monger’s and his shop selling fancy Japanese goods. 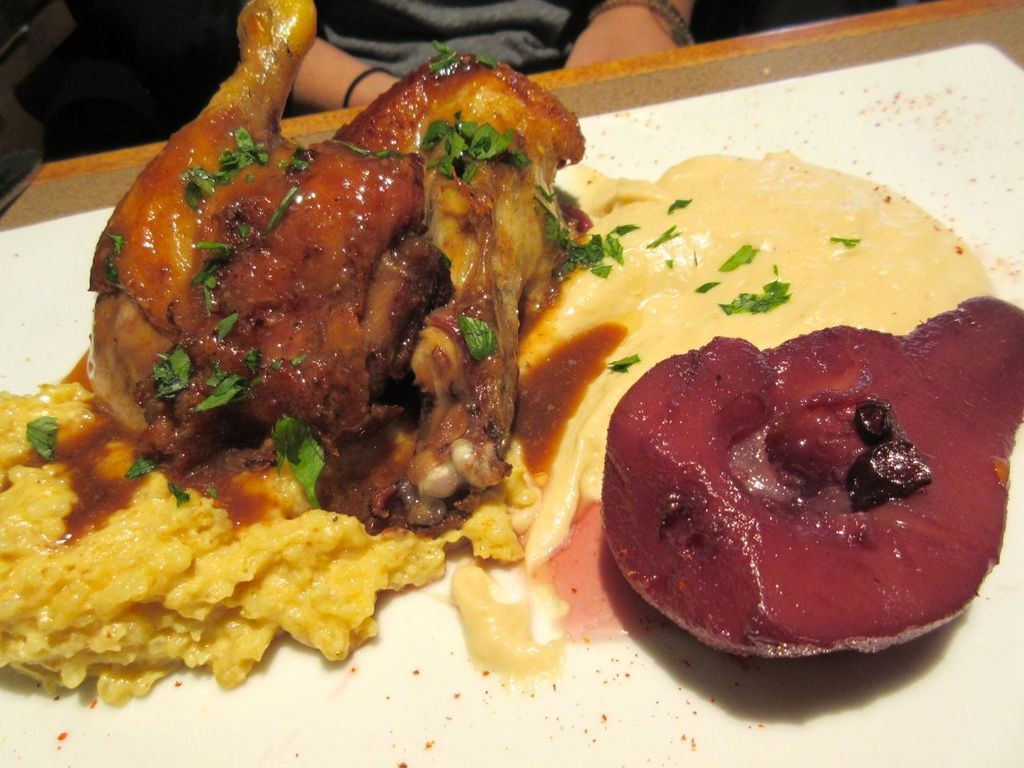 Both my Challans duck (enough for two or three) and Laurens beef tartare are first-rate.

A waitress settles us at a tiny two-top next to the Depardieu wine bins across from a flamboyant creature who must be an actor, holding court, at the only other occupied table. A brief menu chalked on a little blackboard is propped on the next table. I’m pleased with the porridge that comes in a tilted bowl with crisped root spikes. Lauren’s beef tartare is feisty and rich. Two of us or even three could share the huge half of a roasted duck from Challans, a little bit chewy but also very tasty, alongside a root vegetable puree. 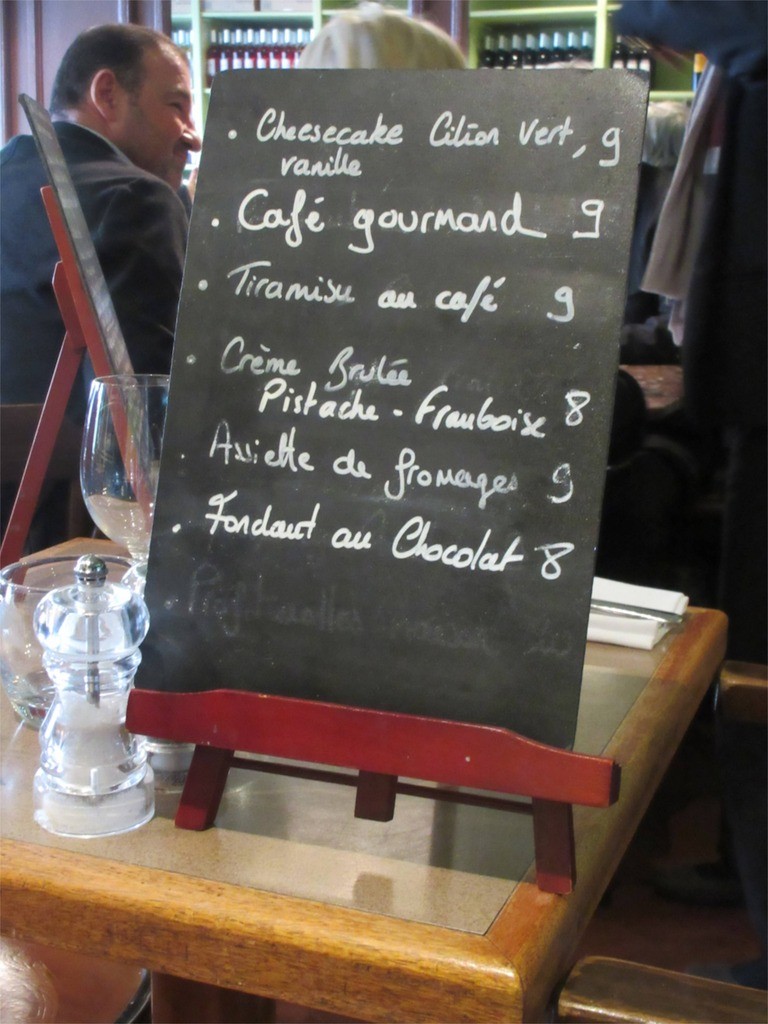 We study the dessert menu propped on the next table and decide to save ourselves for dinner.

What is it? I ask the waiter.  “I don’t know the name in English,” he says. “It looks like a white carrot.”  Parsnip, actually, Yanou tells me later. It seems she called Depardieu on a movie set in Marseille. He is pleased I liked my lunch. And laughs at the waiter’s linguistic plight, using a four letter “C” word that is only three letters in French.

It would be foolish of me to lead you here without some caution based on just one surprisingly fine 67 Euro lunch. We did not even taste the actor’s wine, saving ourselves for full immersion at dinner. But if you’re drawn to the neighborhood anyway for Poilâne cookies or a chunk of the bread, you might consider Girard’s lunch. Depardieu (it was an issue of taxes) has said he will open a brasserie in his new “official” home, Saransk, the capital of Moldavia.  Let’s keep that in mind. La Bien Décidé 117 rue du Cherche Midi. 6th. 33 1 45 48 39 29.

All photos are the property of Gael Greene and may not be used without permission.