Gael Greene: The Ribbon: The Brombergs Court the UWS

The Ribbon: The Brombergs Court the UWS 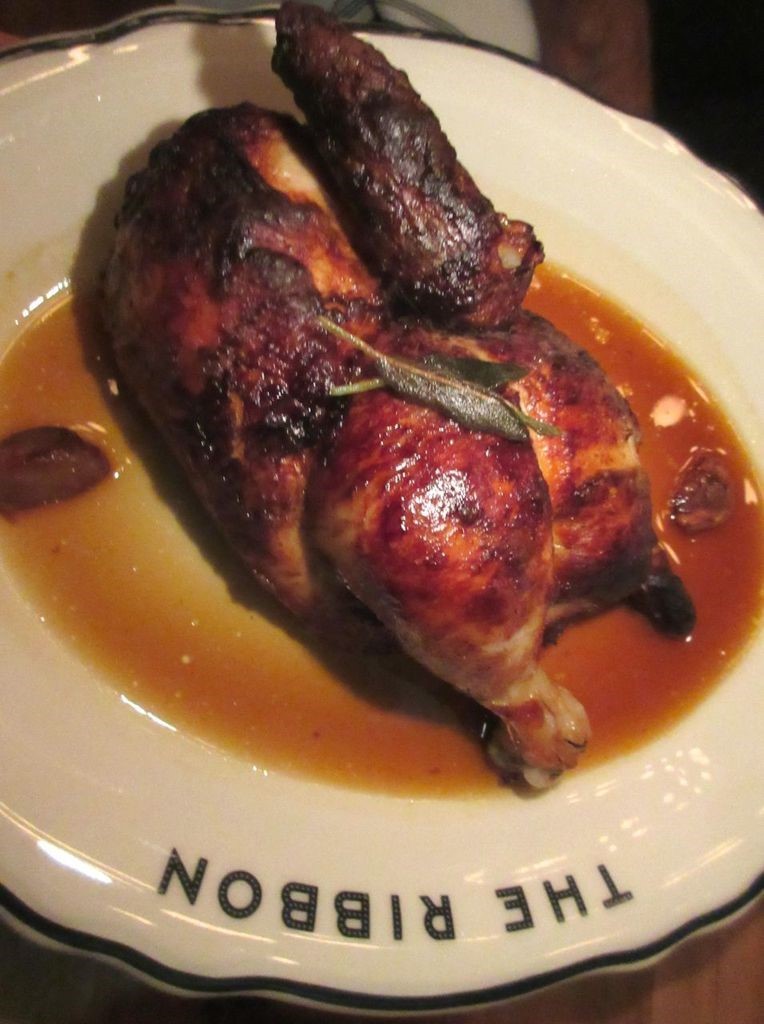 The Spit-Roasted chicken, solo on its oval plate, looks gorgeous but something is missing.

When the Times’s FloFab revealed the news, westsiders all stood taller. The Bromberg boys were loading The Ribbon into the 200-seat sprawl on West 72nd where Sambuca had been of no interest at all forever. Even with the heritage of the building once being owned by mobster Arnold Rothstein in the ‘20s, it still seemed a little provocative, almost sadistic, that The Ribbon would only offer their celebrated fried chicken Sundays and Mondays. But never mind. It was a dream come true – a menu with something for everyone — just what the neighborhood needed. 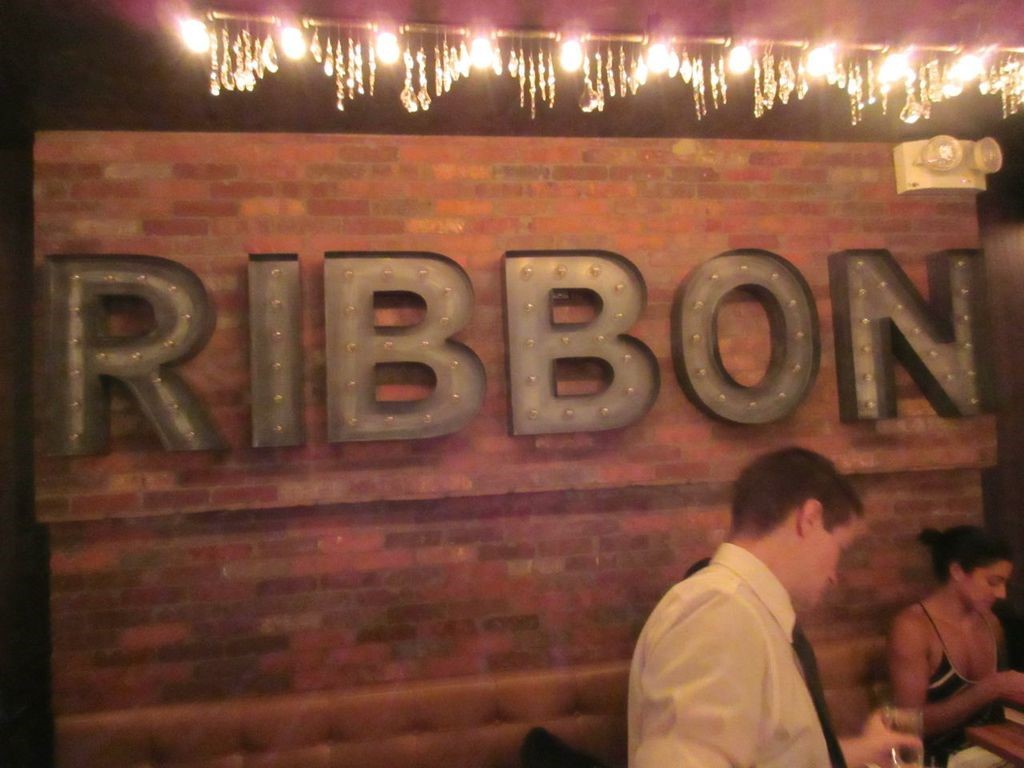 Too bad the city won’t let Ribbon light up its fabulous sign. Too big wattage, they say.

The last time Upper West Side eaters were so excited was when Red Farm chose Broadway for its first clone.  Well, actually Parm’s landing on Columbus Avenue just south of 71st Street also ignited the equivalent of the Haj pressing toward Mecca. I expected that the brothers Bruce and Eric Bromberg would drop an evolved, grownup variation of the childhood comfort food of the ‘50s that they amused us with at Blue Ribbon on Sullivan Street in 1993 (Read my review by clicking here.) 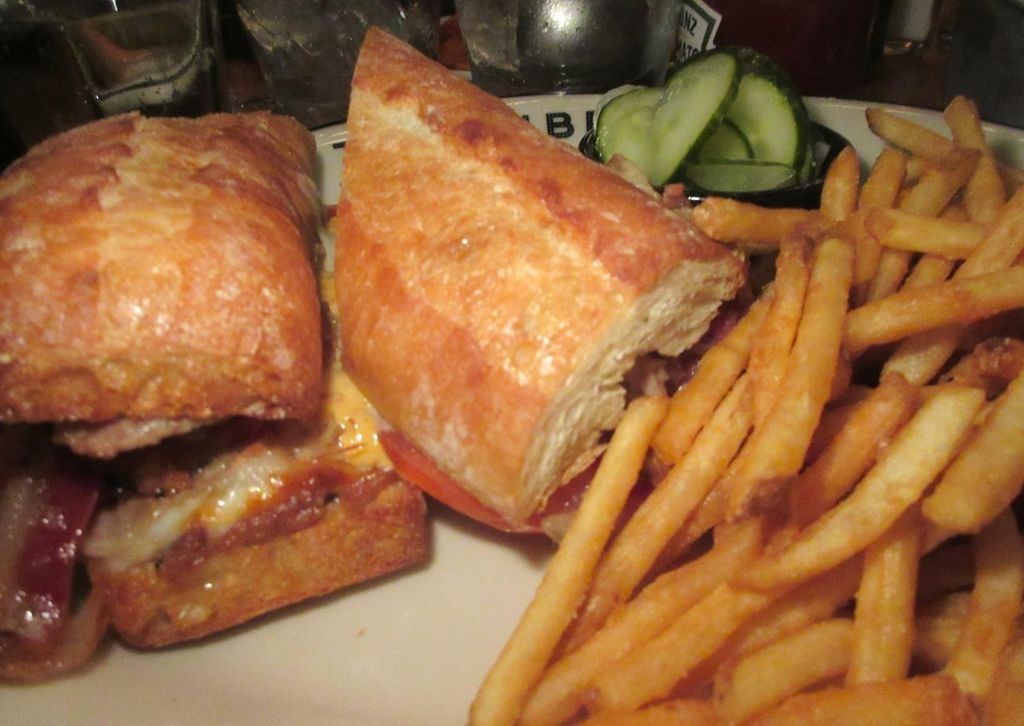 The pig club is a great pileup of rotisserie pork, smoked bacon and provolone on too much of a hero.

Since then the Blue Ribbon franchise has spread to bread and sushi, to Park Slope and the East Village, to Kips Bay and the Battery, to Las Vegas and London. I’d succumbed in a booth at Brooklyn Bowl (Nov15, 2010) to deviled egg shooters with fried oysters on top, pigs in blankets, and crusty macaroni, fat shells oozing goo. I envisioned knockoffs of the same on 72nd Street.  Given the crowd outside the door on opening day, vying for those 200 seats, it seemed westsidsters had just been waiting for Ribbon. They piled in 500 strong the first night. I couldn’t dawdle much longer myself.

A few nights later, a friend and I are parked at a cramped, fake-aged two-top in the rear with inches between tables for a waiter to pass — not without bumping. He doesn’t seem agitated about it, as I would be. We’re in the old folks’ corner. I admire the photography collection on the walls — a little like Ralph’s at Polo, reminiscent of Clocktower’s — but these are definitely not Ralph’s people, not Ian Schrager’s either. Not far away I see fertile early birds with in-laws and strollers and toddlers running loose.
The crusty bread in its basket is proudly from Blue Ribbon bakery and every plate boasts the logo. A foil- wrapped cube of special butter would be more impressive if the bread were not already stale from being cut too many hours in advance. I could complain that the tin ceiling magnifies the din (even in the old folks’ corner) but I know the roar is deliberate. Middle-aged restaurateurs believe millennials prefer it that way. My friend and I lean in and speak up.

Our shared Caesar comes already divided into two bowls, very crisp romaine plus all the obligatory ingredients – crouton, parmesan, anchovy – not brilliant, not pitiable, just okay. I want to order a green vegetable but zucchini is boring, creamed spinach is creamed, and sautéed kale is kale. Roast carrots don’t really solve the need for green, but at least Mom would have considered them a vegetable.
Half a spit-roasted Amish chicken looks darkly crusty and caramelized but tastes pre-boiled to me. It seems greedy as a $26 entrée without a side. But I’ve waded through the vast menu and am delighted with my $18 pig club from the “Carvery” — rotisserie pork, smoked bacon, with pickles and provolone stuffed into a hulking hero. I can barely finish half. And it comes with respectable fries.

I can’t say there’s $12 worth of joy in the hot fudge sundae we’re spooning into, even after I shovel away a mountain of whipped cream to find a walnut. There can never be too much chocolate. Still, given the sprawling room and the sprawling menu, I sympathize. The house needs time to gel. The check comes tucked into an old book. Always leave them smiling, I think. I definitely need to taste more.

A neighbor joins me a few nights later, eager to explore the Bromberg gift to the Upper West Side. We traipse past the antique Victrola and the glassed-in kitchen to the far reaches of the grownups’ room. Again. “I think I’ll order a drink,” she says. “There’s so much to read on this menu.”

I like that the waiter asks if we would like bread.  No point in wasting it, I agree. I ask for two slices. It comes in that napkin-padded basket with the premium wrapped butter. The waiter recites the specials and I laugh when he describes the “dumpling” entrée, made with mashed bread and onions. So that’s where all the stale bread goes to die.

Buffalo-style cauliflower. Great idea. Can’t resist. At $12 its also cheaper than the $21 shrimp Alonso with peekytoe crab or the $21.50 foie gras torchon, the $19 clams Andouille and the $16.50 beef marrow and oxtail marmalade which appeals to my devil-may-care spirit of denial. Inside its fried crumb breading the cauliflower should be cooked a bit more.  But the blue cheese sauce is good to the last drop, mopped up with a crust of bread.

I decide to try spit-roasted chicken again to see if I can figure out why, underneath that beautiful glaze, it’s just another everyday bird, tasting pre-boiled. Maybe brining does it. My friend is deeply disappointed, even annoyed, to discover that what the menu lists as “chicken fried” short ribs are stringy beef stuffed into three big battered discs. At the next table a foursome seems very happy with the thick prime rib of pork and the master’s slab of roast beef. Sweet, moist coconut cake cheers us as we try to find a taxi in the thunderstorm outside.

Friends who will drive anywhere for good fried chicken are eager to join me for Monday’s fried chicken night. After all, Ribbon is close to home for all of us. I expect a line around the block on fried chicken night. Indeed, an eclectic crush that strikes me as very Upper West Side (though I can’t quite explain what that is) hovers over the reception desk as I arrive. It seems the air conditioner is down in the back room. Can they stay? Should they go? They are waiting for a miracle to find them a table.

My mates have arrived in time to snag the last empty table next to the window in the bar (with a working air cooler above) and are giving the house cocktail designer an audience to impress. He is proud of his “Shaken and Sours” and the ”Strong and Stirred,” some with house-made syrups and bitters.”  The staff is not quite up to the craftsmanship.

One of my companions sends back his straight-up drink because he ordered it “on the rocks.” I ask the waiter for a Negroni with a little extra Campari. He looks like he has never heard either word before but he writes it down on his notepad and, in due course, a very good Negroni arrives with a shot glass of Campari “on the side.” He grins in triumph. Could we be in a better mood for dinner? I don’t think so. Especially when the chicken liver mousse arrives in its small Mason jar with toast alongside, and it proves to be silken, buttery and delicious.

It’s my third visit and I’m determined to explore the Butcher’s Salad now that we’re four to share the $22.50 splendor of bacon, spit-roasted meats, mushrooms and blue cheese vinaigrette. I anticipate ribbons of juicy roasted beef and pork, romaine, of course and maybe onion, not quite so much white meat chicken, not big grey thins of arid meat. More blue cheese oomph would help. It’s almost a carnivore’s veggie option, maybe a B+. The Brombergs may not always score in the kitchen but they sure know how to write a menu.

Again my friends and I struggle to order a green vegetable. “I thought I was ordering cream kale,” my friend Penny apologizes, grabbing the menu to look again. “The word was green kale, not cream kale, and it’s the same old horrible kale,” she complains. But that isn’t what shakes our faith. It’s the fried chicken. We’ve ordered two halves at $25 each with nothing on the plate. Actually, we form a rather pleasing symmetry. We are two white meat eaters and two dark meat lovers. The bird itself is moist – even the breast meat – but the crust is weirdly salty, slightly medicinal, and sandy in texture. That could be togarashi, the Japanese chile powder.

Our steak expert is impressed by the Queen’s cut of prime rib. (I think the kitchen has substituted a King’s cut to please a critic.) The waiter wasn’t sure the kitchen could deliver it rare, but it’s rare. I think it needs the horseradish sauce. I’m actually more enticed by garlicky, roasted fingerlings with sour cream. I like everything better than the fried chicken. Except the kale, of course.

Before we can decide on a dessert, waiters are setting up forks and spoons for, they announce, the gift of the chef – tres leches and espresso sundae, the chocolate chip bread pudding, and cheesecake with apricots and vanilla ice cream. Any one of the trio might satisfy that need for something sweet before the check, but none will haunt my dreams. The manager is gung-ho and happy. We commend him as the first manager we’ve seen wearing shorts. I’m sure he would lose that sweet smile if he realized the waiter has charged us for the gift desserts. 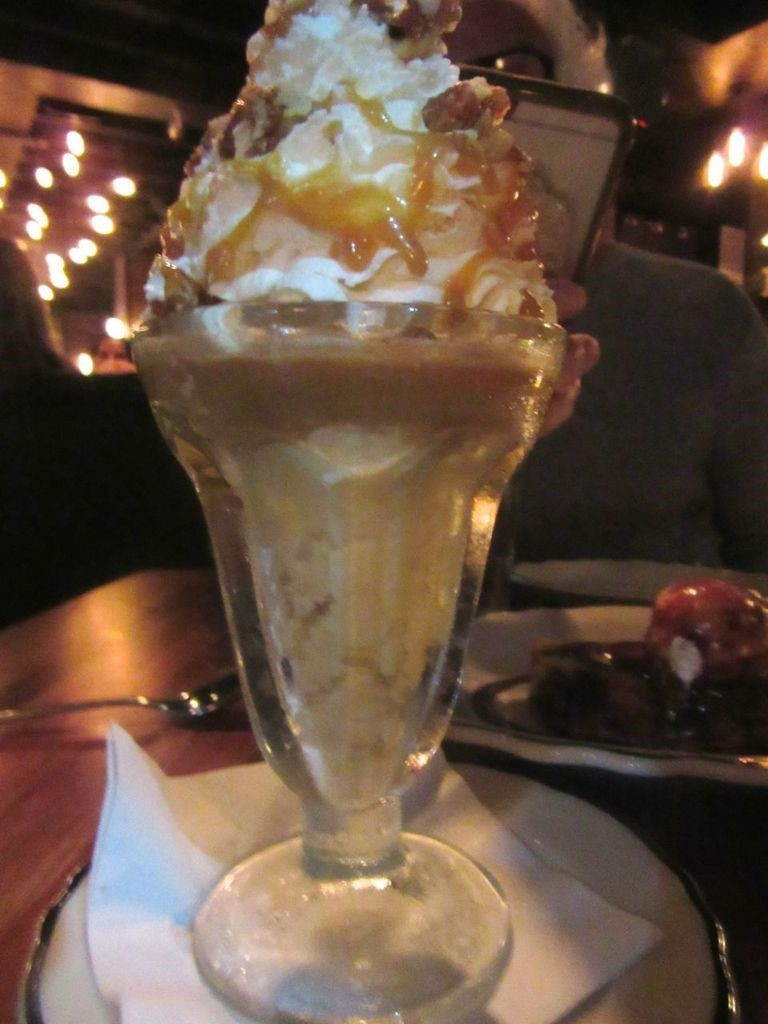 It occurs to me after three meals that maybe Ribbon isn’t going to be the local canteen of my dreams. I want Brooklyn Bowl – spare ribs, pigs in blankets and a potato knish — without the bowling. It’s not home-away-from-home for me without mac’n’cheese. I wouldn’t mind a revival of the pu pu platter. But I suppose I can’t fault the house for wanting to fatten the check.  After all, that is the Dakota across the street. 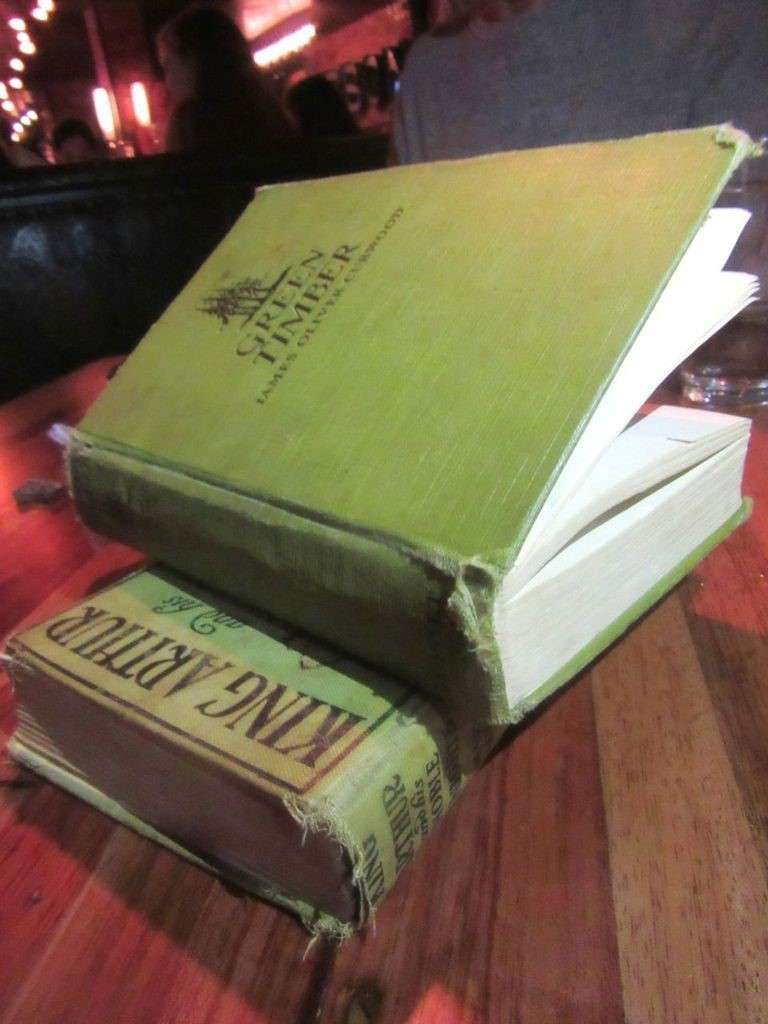 Gael Greene: The Ribbon: The Brombergs Court the UWS

The check comes inside a fraying cloth-bound copy of King Arthur. We ask each other if there is some meaning in that. Our credit card receipts arrive in a second frayed book, Green Timber, piled in a green pyramid. What do you think?