Where do I eat when I’m not hustling to find something to review? Here’s where I’m going right now, just for fun, because it feels special, and maybe also, to impress a friend.

In Love with Lupulo 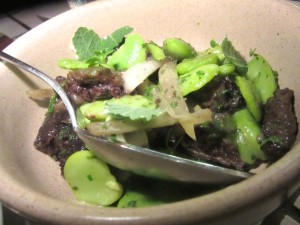 It must be love. I was sitting at a far corner near the kitchen at George Mendes lively new Lupulo two Fridays in a row and with the same two friends. The lofty tavern with it’s good-looking blue-and-white tile, rope dividers and wrought iron fairly vibrates with good cheer from the rotating full house. Another way of saying “noisy.” And George himself is on the run everywhere.

But it’s the small Portuguese dishes, mostly coming off the wood-burning grill that brings me back again – the charred cucumber and razor clam salad, grilled green asparagus with sea urchin, sorrel and walnut, the blood sausage in a toss with favas ramps and morels. Not to mention the dense Portuguese bread from Newark to mop up the last drop of sauce. Depending on what you order, you can put together a modestly priced dinner. That’s an enticement too. The shrimp porridge with a soft hen egg is enough for the table to share. And, amazingly, a $14 half of chicken – marinated his Mom’s way, butterflied and charred crisp – with a fiery piri piri pepper sauce – is also enough for four. (Click here to read more.) 835 Sixth Avenue between 29th and 30th streets. 212 290 7600. 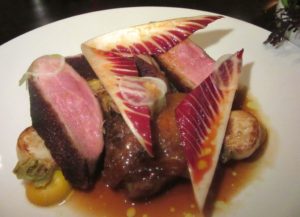 My idolizing of Ian Schrager, the perfectionist hotelier, and my longstanding delight in David Rockwell’s design lured me to The Clocktower as soon as it opened. (Read my review by clicking here.) The good-looking youths at the door, the exaggerated welcome, and the extravagant show of black and white photography on the walls – artists in the bar, music idols in the billiard room, cultural icons in the blue room – conspired to temper critical defenses. I was impressed that Schrager had enticed seasoned restaurateur Stephen Starr to partner with the British star chef who would ultimately be going home to his many Michelin-starred tables, leaving his right hand number two behind.

But it’s Jason Atherton’s English food, the scrumptious rye bread and buttermilk-infused butter, and his witty, imported, tabletop touches – the death’s head plate for the steak, the collection of chicken-shaped gravy boats – that bring me back again now for my own pleasure. I like the raw diver scallops, Alaskan king crab, and chicken with white asparagus (best at the height of fat white asparagus season). Not-Exactly-Mom’s macaroni with morels, the duck on sauce a l’orange, and the chicken for two linger in my mind as dishes I must repeat, although at a recent dinner my friend and I each had the burger with bacon, cheddar and Churchill sauce (ketchup and mayo by a grander name). The fat soggy chips were better cooked extra-crisp as demanded. 5 Madison Avenue, entrance on East 24th Street. 212 413 4300.

If It’s Good Enough For Ralph 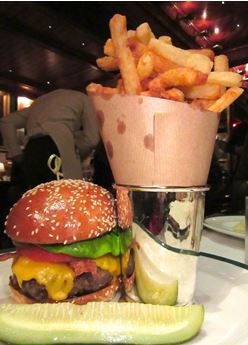 I’m not really the clubby type and if you analyze it even without malice, Ralph Lauren’s Polo fantasy is really a hoot. But never mind, I’m free to go to Polo Bar when anyone calls to invite me. It’s fun, with golden light that flatters aging epidermi, and welcoming smiles – nice is the new haughty. With the polo mallets hanging on the wall and an abandoned helmet next to the roses on the entrance table, it’s a Disneyland for grownups. (Read my early rave.)

The food is not the point, but it’s not bad at all. And I like what Ralph likes to eat, the cheese-infused popovers, the overstuffed corned beef sandwich, the Ranch House chili with a pecorino biscuit, a phyllo-crusted crab cake, the iceberg wedge, the good-enough chicken and a salty bone-in rib eye. My friend who is almost a regular always orders the Dover sole. I impressed a pal visiting from Aspen by scoring a table recently and we both had towering burgers with unusually good fries. Ralph understands desserts too: I love the walnut-studded brownie with warm chocolate sauce poured on, and his idea of apple pie. On summer weekends when regulars disappear to the Hamptons, you might see some curious-looking everyday types in tank tops. Sorry about that. I East 55th Street between Fifth and Madison. 212 207 8562. 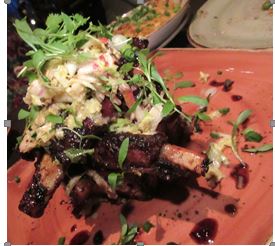 I’ve never taken anyone to The Cecil in Harlem who didn’t succumb to its look — the diverse crowd of downtowners and locals — and the African-Asian-Low Country menu dreamed up by managing partner Alexander Small and delivered by chef J.J. Johnson. (Click here to read my first review.) I stopped going for a while when the house cruelly reduced the size of the “small” macaroni and cheese. But I couldn’t stay away. On my most recent visit, I persuaded my friends to let me order the chef’s new dishes.

Some of those we tasted had a confusion of too many ingredients. The giant pork dumpling with grilled peaches was a bit overwrought, but we liked the lamb carpaccio with silken tofu sauce, and the mussels in a tangy stew of duck sausage, with roti and a powerful dose of yuzu. Both the sweet and smoky duck with English peas and the meaty and chewy St Louis ribs on blue cornmeal cake were hits. Of course, I had to have the house’s crusty mac’n’cheese. The chef sent it out as his gift in a large clay casserole as I remembered it, enough for all of us to share. I can’t guarantee yours will look the same. As a finale, the four of us divided a delicious small coconut tart with sweet potato ice cream and dollops of yuzu curd. (Click here and scroll down for my guide to the new menu.) 210 West 118th Street at St. Nicholas Avenue. 212 866 1262. 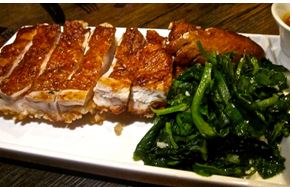 The Upper West Side Red Farm is my local. It doesn’t hurt that it’s a four-minute walk from my place. I probably would go less often, except that everyone, especially out-of-town kin, count on me getting a table. I explain to newbies that Red Farm is about dim sum – that’s Chef Joe’s unique talent. He has more than a 1000 dim sum, both savory and sweet, in his repertoire. I’m disappointed he doesn’t rotate new ones into the menu more often. (Click here to read about it.)

I must have smoked salmon eggplant bruschetta – the crisp chip of fried eggplant stands in for the toast. Then depending on whether my companions are vegetarian or not, I order the shrimp and snow-pea-leaf dumpling, the lamb shooters, vegetable-peanut dim sum and Shanghai soupy buns. If my guest is a guy, I feel I must let him try Katz’s pastrami egg roll. (I, myself, try to avoid anything fried.) Since I discovered the chef’s sublimely crispy shrimp-stuffed chicken, that’s become my entrée. I let my guest choose a vegetable dish: If they insist on noodles, I push for wide rice noodles with BBQ duck. 2170 Broadway between 76th and 77th streets. 212 724 9700.

Bustan Takes the Upper West Side 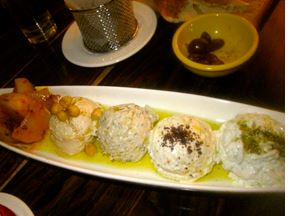 It’s true I discovered Bustan the week it opened, with its famous Israeli chef manning the big blue taboon (its custom-built oven.) But the neighborhood discovered it too, and it’s been packed ever since. Now, though the chef has decamped and they’re new faces at the door, it’s often booked days ahead, even with the garden and sidewalk tables added on balmy nights. (Read that review by clicking here.)

I can’t imagine launching a meal here without a row of classic Middle Eastern spreads — called mezettim on the menu – smoked eggplant, spicy feta, tzatziki, and taramasalata – to pile on oily pita warm from the taboon. I often order three spreads. My favorite waiter might bring five and a second bread when the first is gone. We share a beet salad with grilled haloumi cheese, possibly the falafel basket with tahini. And for a main, chopped lamb kebabs with caramelized onion, tomatoes and pignolis baked in terracotta under a bread dome. 487 Amsterdam between 83rd and 84th Streets. 212 595 5050.