Geffen Playhouse Sets Its Course for Love in Constellations 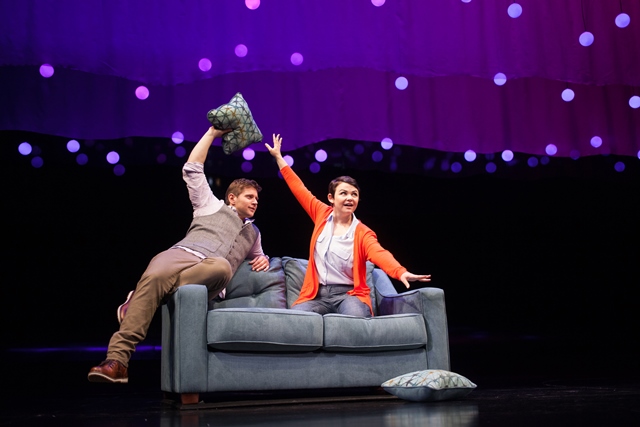 What a difference one decision makes. Turn a corner, say hello, say nothing, leave – even the smallest of choices has the power to alter our future. In Constellations, Nick Payne’s exquisite play for two, now on stage at Geffen Playhouse, we watch the various stages of a couple’s relationship play out as a series of overlapping alternate realities.

It’s the ultimate do-over, and over, and over as Marianne (Ginnifer Goodwin) a quantum physicist, and Roland (Allen Leech) a beekeeper, go round and round on a kind of metaphorical hamster wheel while jumping in and out of parallel universes. Pieces of dialogue repeat but free will changes the direction their love story takes each time. Or does it?

What if every possible decision we could ever make, and never make, exists in a limitless cosmic pool just waiting for us to pluck it out? (one of the quantum theories posited in Payne’s play). Now the question of fate vs. free will moves into even more philosophical territory. Did we invent the thought from nothing or was it there all the time and we simply “placed our order,” as it were?

Add to that the idea that “time is irrelevant at the level of atoms and molecules,” as Marianne tenderly explains to Roland, and the seeming randomness of earlier scenes suddenly organizes itself into a world that oddly makes sense.

Payne’s award-winning play originated in London and three years later opened on Broadway with Jake Gyllenhaal and Ruth Wilson (nominated for a Tony) in the roles Goodwin and Leech now occupy. Though I didn’t see it on Broadway, I can imagine how drastically the play would change based on the choices and chemistry of its two actors. In a way, I guess that also connects back to the playwright’s leap into the multiverse on some mysterious meta-level.

Here at The Geffen, the mind-blowing piece is explored with so much humor and heart-stirring intimacy that its 80+ minutes fly by. Goodwin’s intellectual dexterity and nerdy goofiness paired with Leech’s grounded simplicity and genuine caring is a contrast in personalities that has us instantly rooting for their happily ever after. If she embodies the head, he is the heart, and together they engage in a dance all lovers know well as the paths they take, or don’t take, begin to materialize. We care about their fragile existence as much as we care about our own and resonate with how life, love, and loss affect them.

There is an effortlessness about the production that director Giovanna Sardelli achieves by wrapping infinity around a single theatrical conceit and not overplaying her hand. Fanciful yet profound, and exhilarating in the most hopeful of ways, a strange comfort arises when we realize early on that things are going to shift suddenly and frequently, and we are not meant to analyze them at every turn but to relax into the wholeness of the play.

If anything, Constellations prompts as many questions as it offers answers, and that is the beauty of it.

The color palette is cool in Takeshi Kata’s sparse scenic design and Lap Chi Chu’s subtle lighting. One can’t help noticing how small these two little people seem against such a great wide open playing field. The single most eye-catching point of color is Goodwin’s scarlet sweater, a brilliant way costumer Denitsa Bliznakova manages to illuminate the true center of this universe even as everything, including the man she loves, revolves around her.

Constellations is a sophisticated and poetic departure into the boundless reaches of love’s universe where two people connect, disconnect, reconnect, and eventually find that, like the Constellations above them, it’s all relative.