Gettin’ The Band Back Together

I had big hopes for the new musical “Gettin’ the Band Back Together.” It seemed like a harmless and fun premise, maybe better suited to a television sitcom series, but hey, I will go with the flow.

The first sign that things might be amiss is that the show actually begins with the lead producer, and co-writer of the book, Ken Davenport, taking to the stage with a microphone, welcoming the crowd. He explains that this is an original musical, and that people can relate to being in a high school band. The best line is when he talked about his band from back in his teen years, called “The Barely Manilows.” Now, that is one clever name.

That introduction, I understand, was not just because he happened to be in the house the night I saw the show. It seems he introduces the show with that opening every night. Not sure why, or what value it adds, but once again, hey, I go with the flow.

The premise is simple. A Wall Street trader, Mitch Papadopoulos  (I saw understudy Scott Richard Foster) is let go from his job. With no prospects, he heads back home to Sayreville, N.J. to live with his mom, Sharon, played by the sexy Marilu Henner.

While there, he meets up with an old buddy, Bart (a funny Jay Klaitz) and they decide to rekindle their high school band. The reason? Sharon’s house is in foreclosure and about to be gobbled up by Tygen, their nemesis, who also went to high school with them and had a competing band. There will be a band competition to save his family home or loose his house to Tygen, (Brandon Williams) who, by the way, wants to win back the one band trophy he lost to Mitch 25 years before. He wants the trophy. Bad.

So the plot for the show is launched. There are various love interests along the way, most notably Mitch’s old high school flame, Dani (Kelly Barrett), who is now living with Tygen, but really still likes Mitch. I guess she had a thing for musicians. 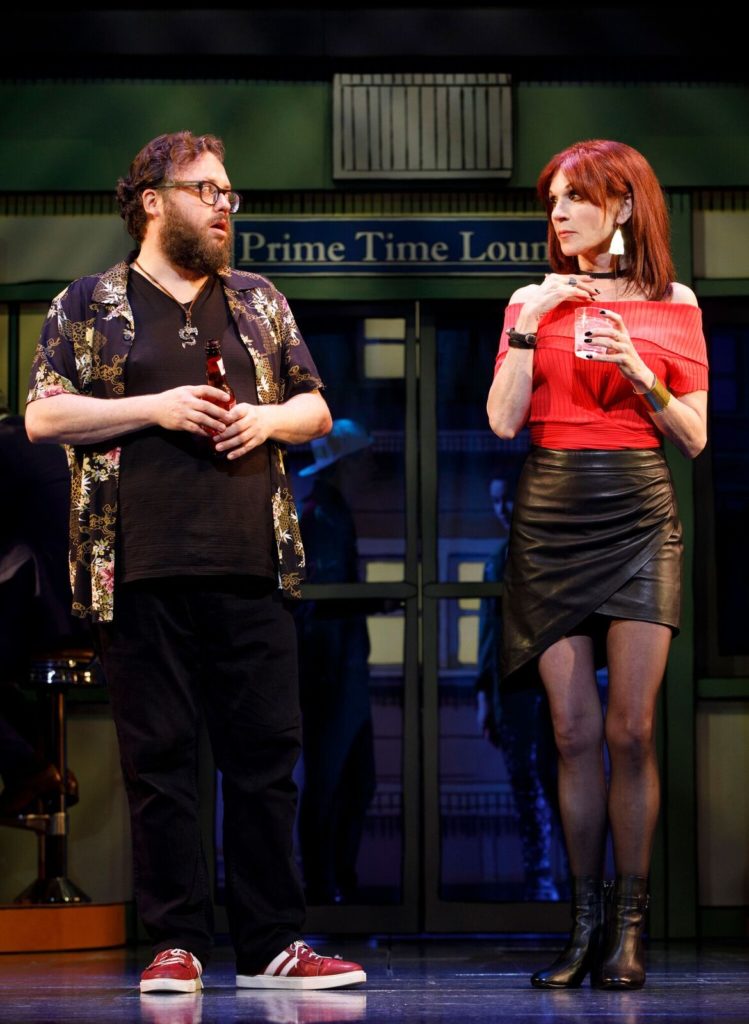 Look, as I said, it’s harmless and could be fun, but the book needs an infusion of sharp wit and better plot lines. To be fair, the show does improve in the second act, and by the end, audience members were clearly enjoying themselves. It just takes a long time to get there.

The characters and the story are contrived. What are supposed to be really funny ideas just aren’t, but the songs by Mark Allen are actually enjoyable. There are a couple of good numbers, including a great prison tune, “Life Without Parole,” an over the top “Bart’s Confession,” a sweet song, “I Just Want Real,” and a rocking version of “Hava Nagila,” which kicks off the second act. There is a funny, but shoe-horned character who is a depressed lounge singer in a diner (played by a very funny Ryan Duncan) singing “Second Chances” and then of course there’s the title song, “Getting’ The Band Back Together,” which we hear alot.

This could have been a really fun night. But maybe “Gettin’ the Band Back Together,” even though it is already on Broadway, needs some serious fine tuning.