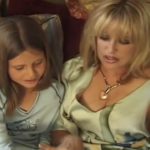 GirlTox is a commercial spoof produced by In the Trenches Productions and our West Coast Editor, Debbie Zipp, about the horrors of finding your daughters first wrinkle and how GirlTox Cosmetics comes to the rescue.