The Princess on the Pea Curated by Günter Seeger 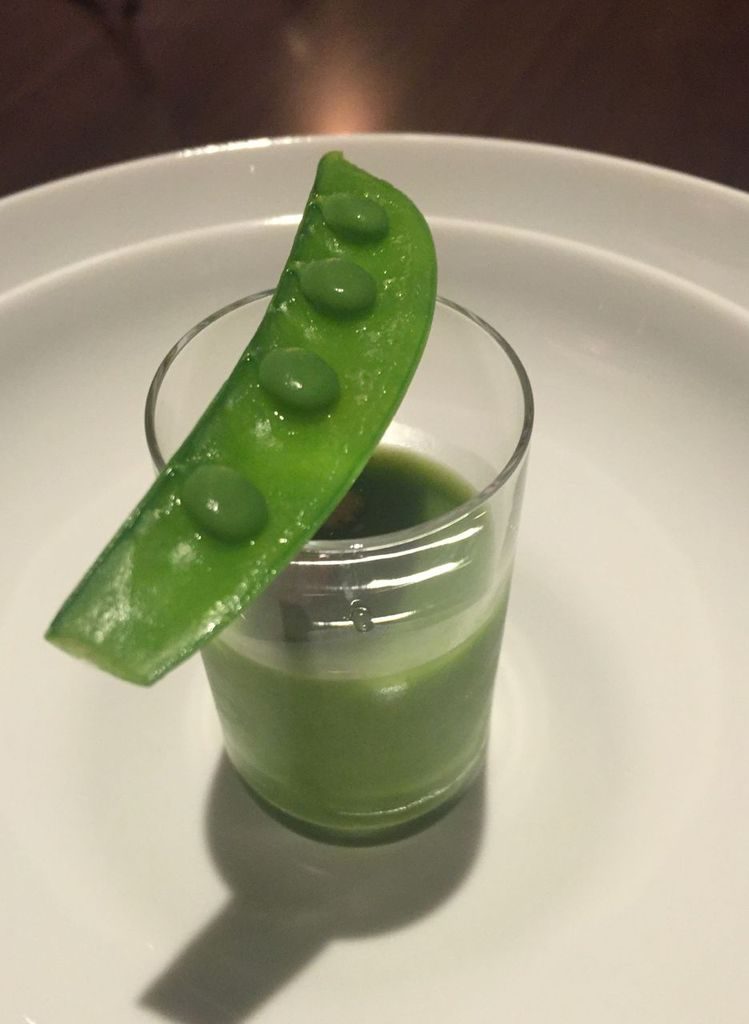 A pea that is more than a mere pea above a gazpacho with bits of toasted brioche afloat.

Yes, there is something remarkable in the crunch of the sugar snap pea guarding Günter Seeger’s gazpacho. Is it lacquered? Caramelized? I sip the viridescent spill of smart spring pea touched with mint, my tongue finding the nuttiness in the flotilla of toasted brioche dice. Hmm, so good. 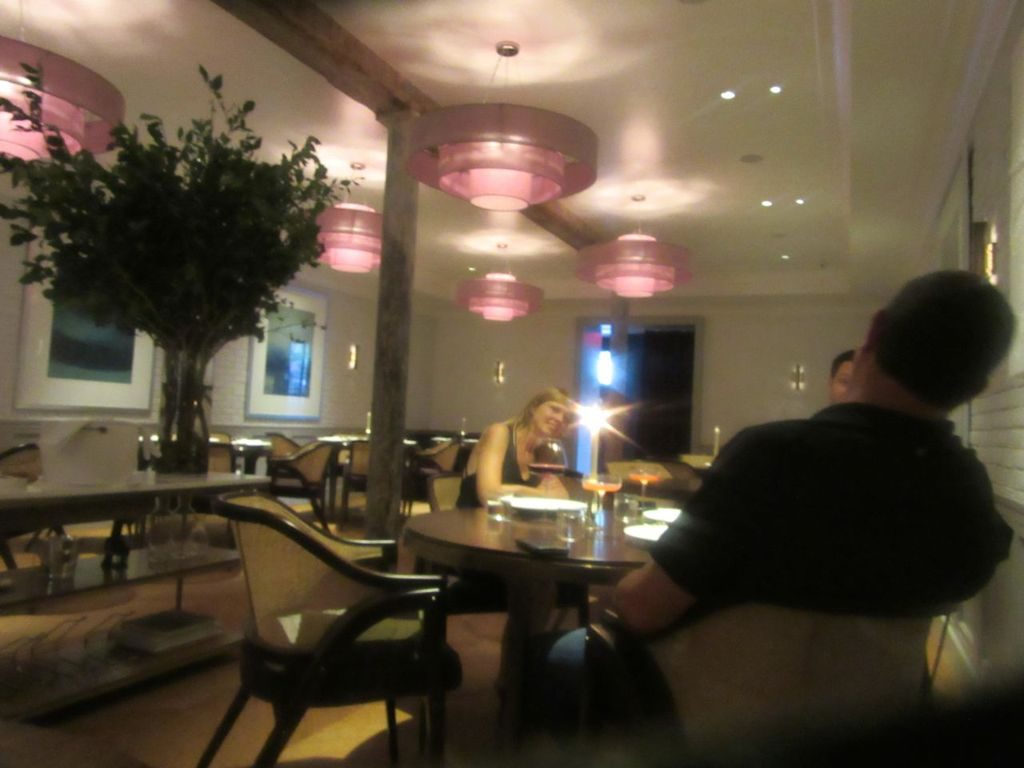 Who will be Seeger’s audience? At the nearest table, the host has had five cocktails.

I’ve come with doubts and a chip on my shoulder. Expensive tasting. Pay in advance. Still, I can’t complain that dinner’s opening shot takes forever to arrive. Our waiter in his dark business suit tries to serve it along with my companion’s cocktail. But I know Wilfred rushed downtown from a tempestuous day and needs to savor his martini 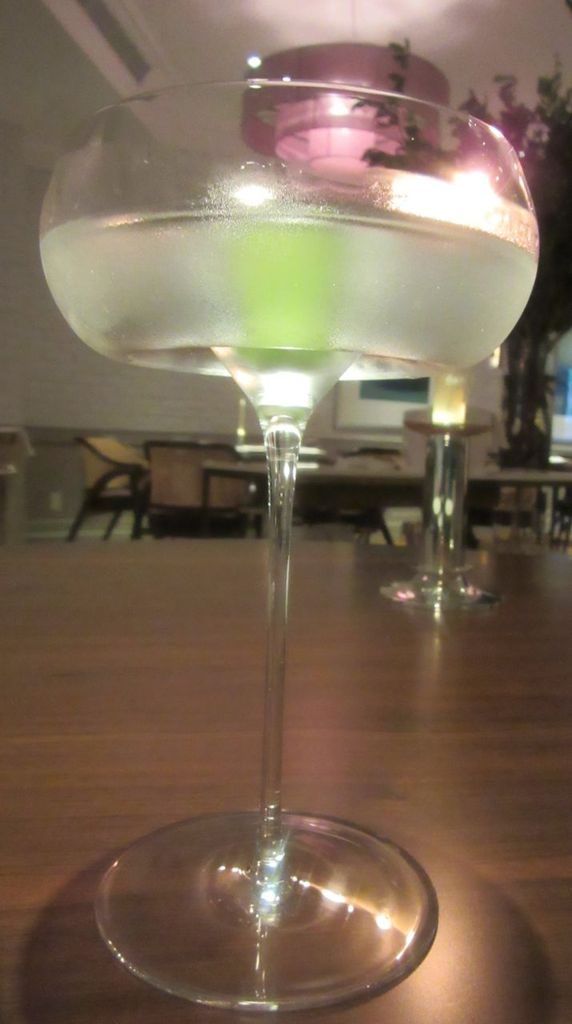 Normally, my pal Wilfred likes three olives in his martini, but tonight he just needs a drink.

It comes in a goblet we’ve never seen before – crystal, obviously, thinnest stem, an odd indentation under the bowl. “Hand blown, German,” sommelier Sabra Lewis responds to Wilfred’s question. “I’d never heard of it, either, till I saw them in the chef’s home.” 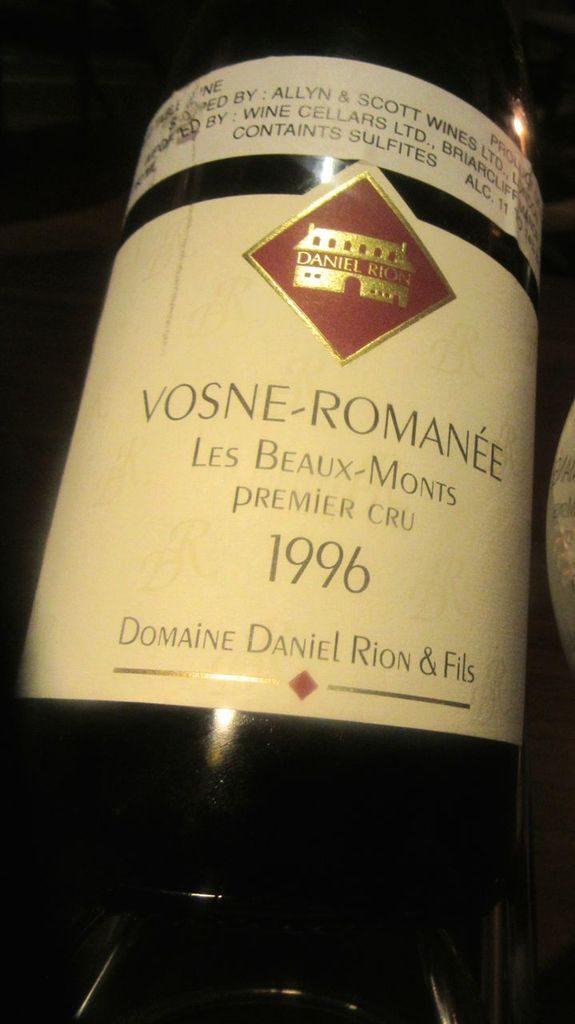 The oenophilic Wilfred asks for a good Burgundy. The sommelier pours a Vosne Romanée.

Mellowed now, Wilfred is inspired by the delicious complexity of the gazpacho to ignore the single page listing of wines, and the $150 pairings. He turns to Lewis’s leather-bound cellar list for herBurgundy suggestion: Les Beaux-Monts, a ‘96 Vosne-Romanée at $195. It’s what my oenophilic pal considers “a reasonable buy.” (The tip is included in the price.) 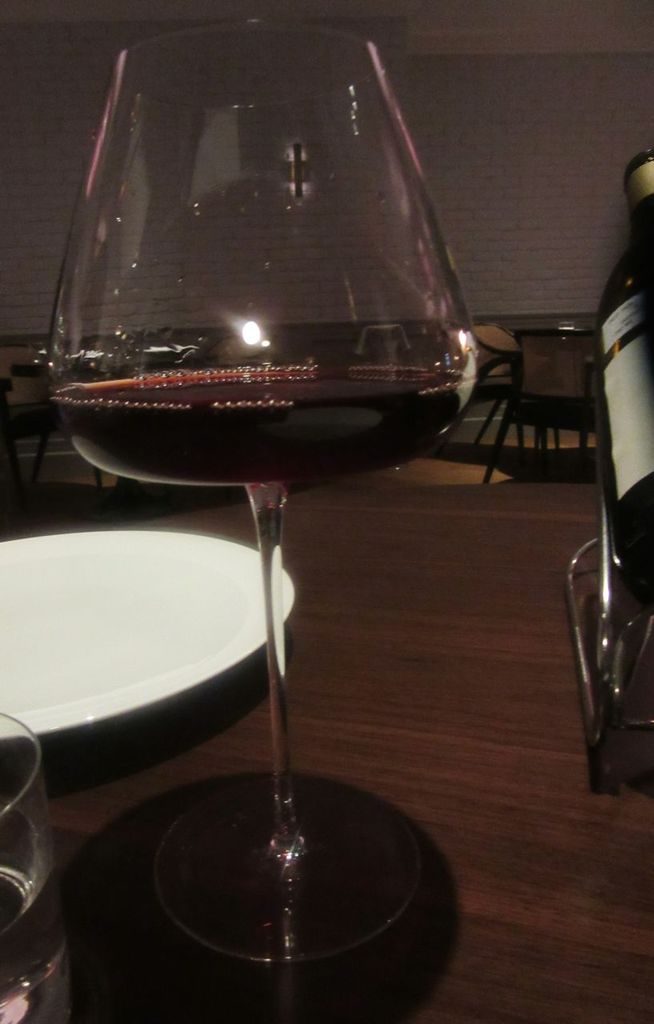 I take a sip as a duo of servers deliver thick slices of brioche — one for each of us. The wine doesn’t merely look good in its unusual couturier glass — rich, red, young. It is good. As our waiter and a second trouper present impressively mounted foie gras, our guy stumbles a bit, explaining it is “foie gras confit with apple compote and onion marmalade.” 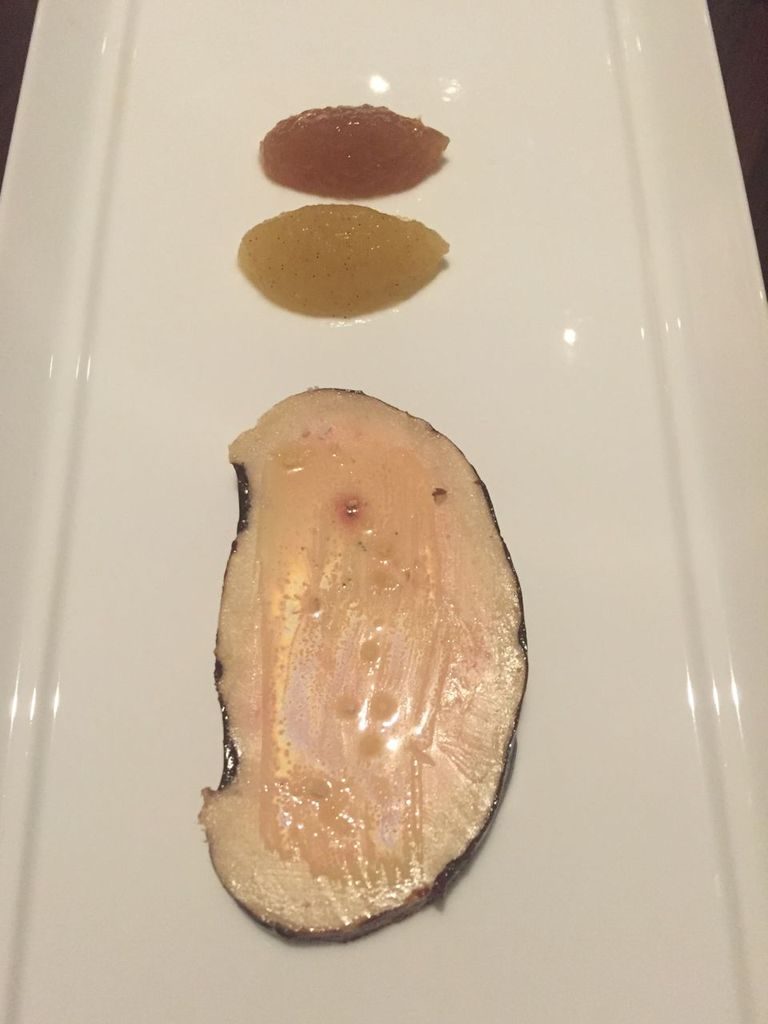 This delicate poached foie gras with apple compote and onion marmalade is exceptional.

Foie gras sublime, I must say, tasting a tiny measure from the tip of the silken island. It is uniquely delicate as if cooled in its bath, it was simply painted with a wine glaze, and then delivered directly to the table. I spread some on a piece of brioche. I take a small bite of the applesauce and another of onion, and then press a third ration of richness on another chunk of the cake-like bread. 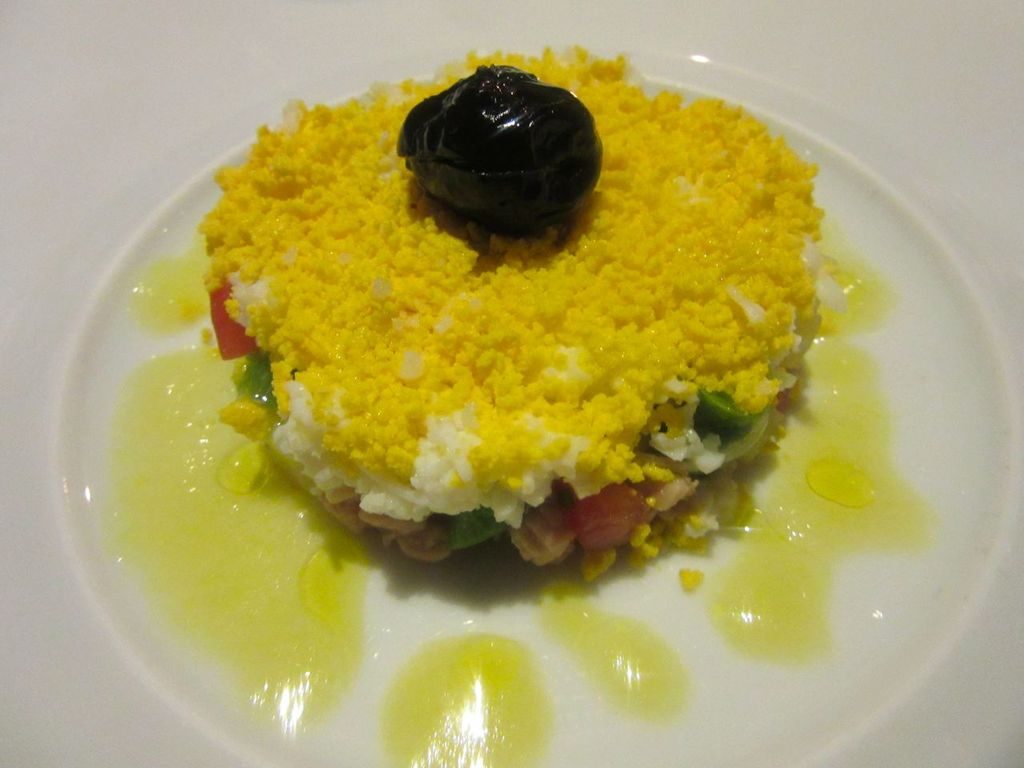 It’s just a cake built out of all the ingredients of a classic Nicoise, chopped. No tricks.

Tonight’s salad Niçoise is exceptional, too – nothing unusual, just all the classic ingredients, chopped and layered in a cake frosted with a rubble of cooked egg yolk. I’m reminded that leaving well enough alone is its own special thrill. The blushing rose smoked sea trout in horseradish apple broth, wearing a flowering onion like a delicate parasol, is another revelation of simplicity. 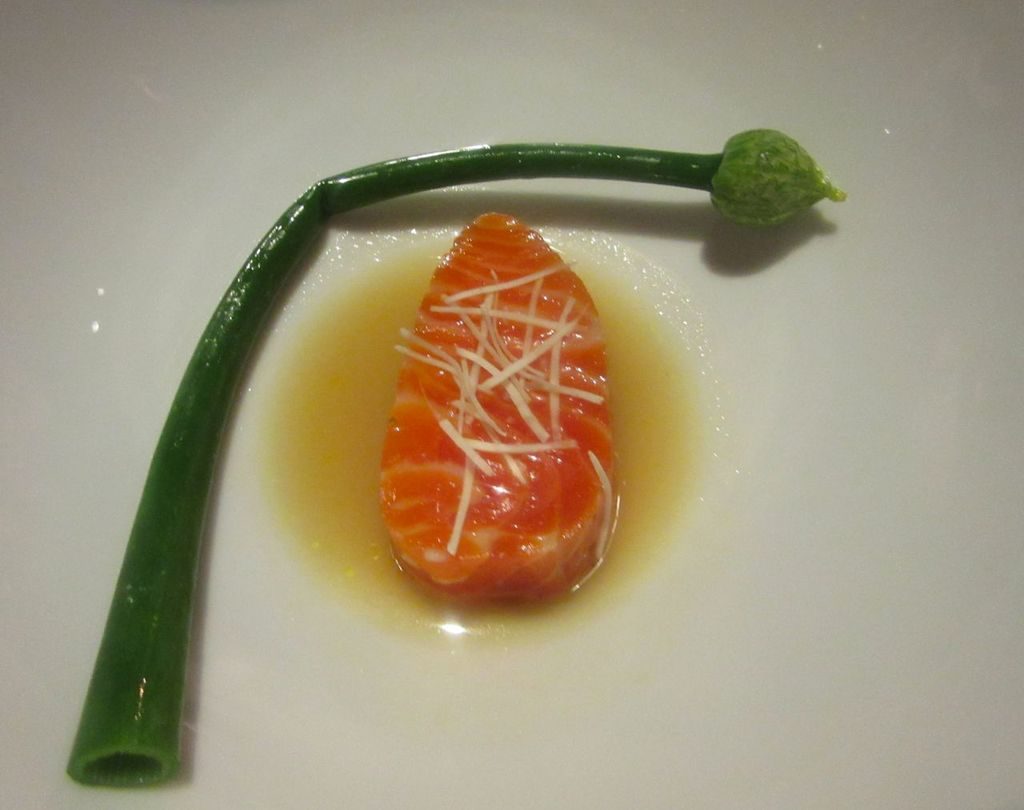 Not many chefs dare this simplicity. Poached sea trout in a horseradish-apple broth.

And then, with little time to come down from the clouds, “First Potato Confit” strikes a stunning blow, its slices of baby new potato on potato purée in a fragrant storm of shaved summer truffle. There is a blissful pause before the squab appears, tender and boldly rare — one leg with claw, easy enough to cut with a designer knife I’ve never seen before. I’m still a critic though. I wish the carrot sauce were less carroty. Perhaps more port or more cream would do it. 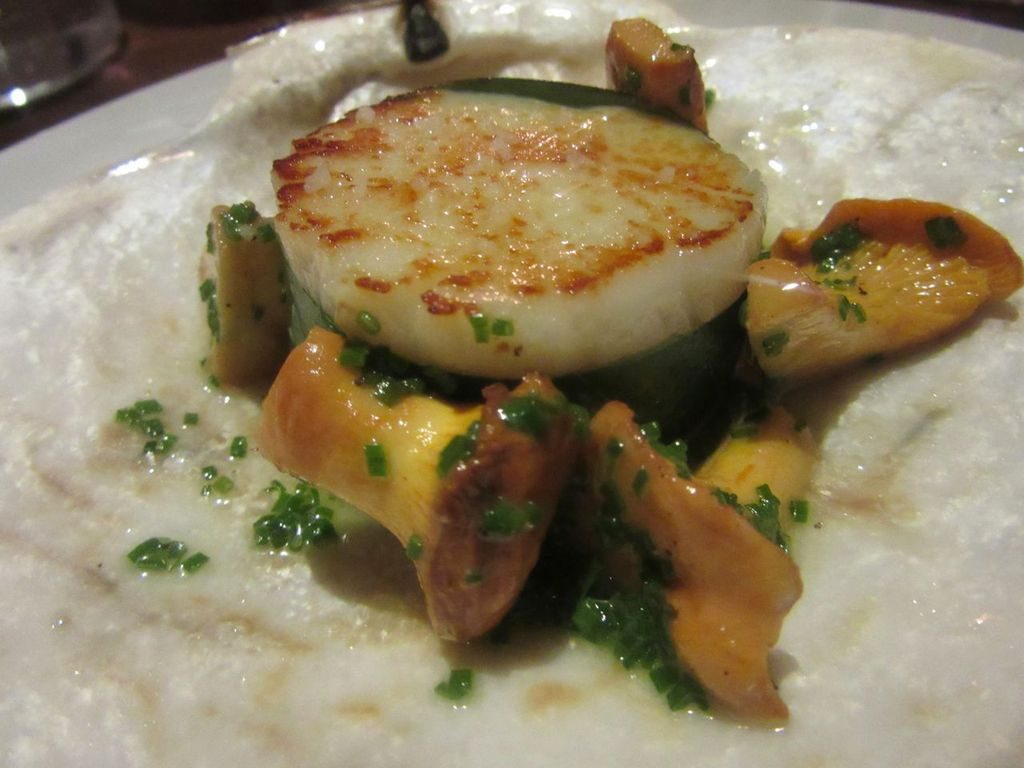 Bay leaf wrapped scallop is served with chanterelles or “chantals,” as our waiter announces.

I wasn’t imagining food this simple or this exceptional when I read about Seeger’s plan for invading New York with a $185 tasting. I’d never been to Atlanta. I’d never heard of Günter Seeger, nor his culinary honors — the Michelin star in Germany, the James Beard medals, his role of focusing on farm- to-table before it became a religion. He had closed his Atlanta place several years ago and now proposes to make a splash, asking New Yorkers to pay in advance for a dinner without tablecloths in the West Village. 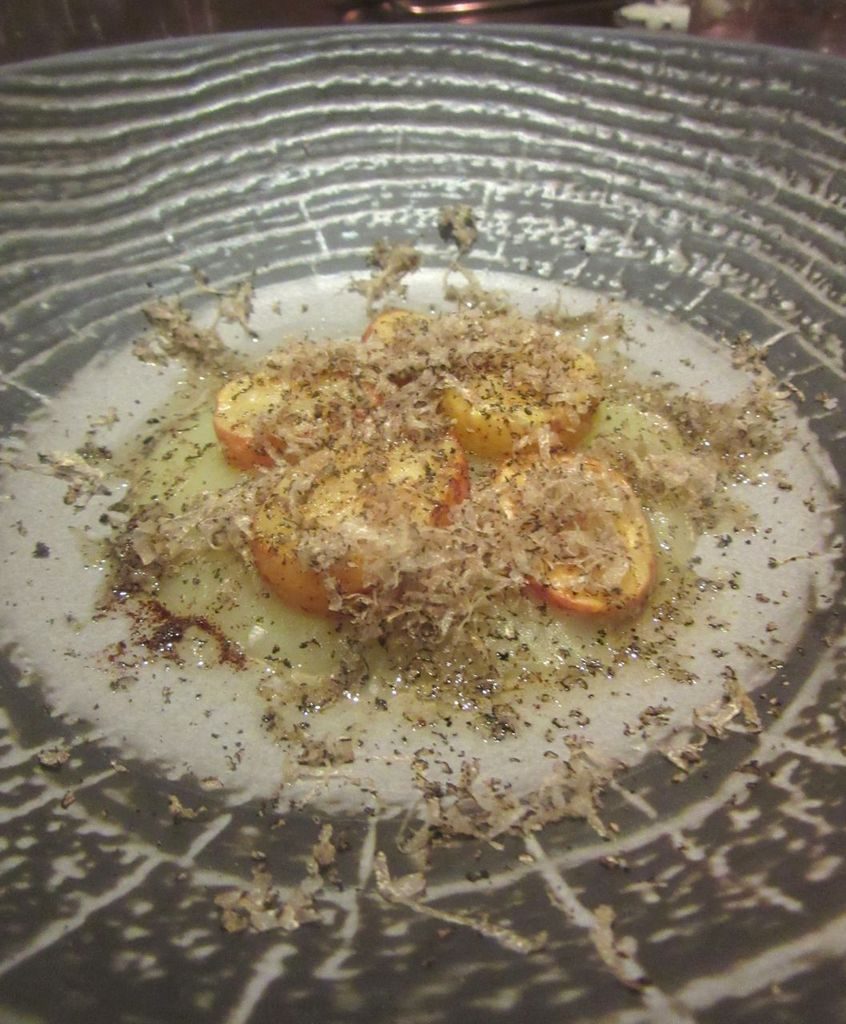 No way can we resist the season’s first potatoes atop potato puree buried in summer truffle.

“We respect and admire the land and the people who deliver their harvests to the restaurant,” he wrote on his website. “Every day we create a dining experience around what we receive… Our signature pivots on integrity, commitment, and attention to detail…The ingredients speak for themselves, with as little manipulation as possible to coax out their natural complexities.’’

And if that wasn’t pretentious enough to invoke a snicker, certainly his demand that pilgrims pay $185 per person in a non-refundable down payment for a reservation was sure to repel any but the usual local masochists. Except for occasional sushi excess, I’ve sworn to avoid prolonged tastings. But I feel it’s my duty to have my pal Wilfred sign us up so I can expose this culinary Madoff. 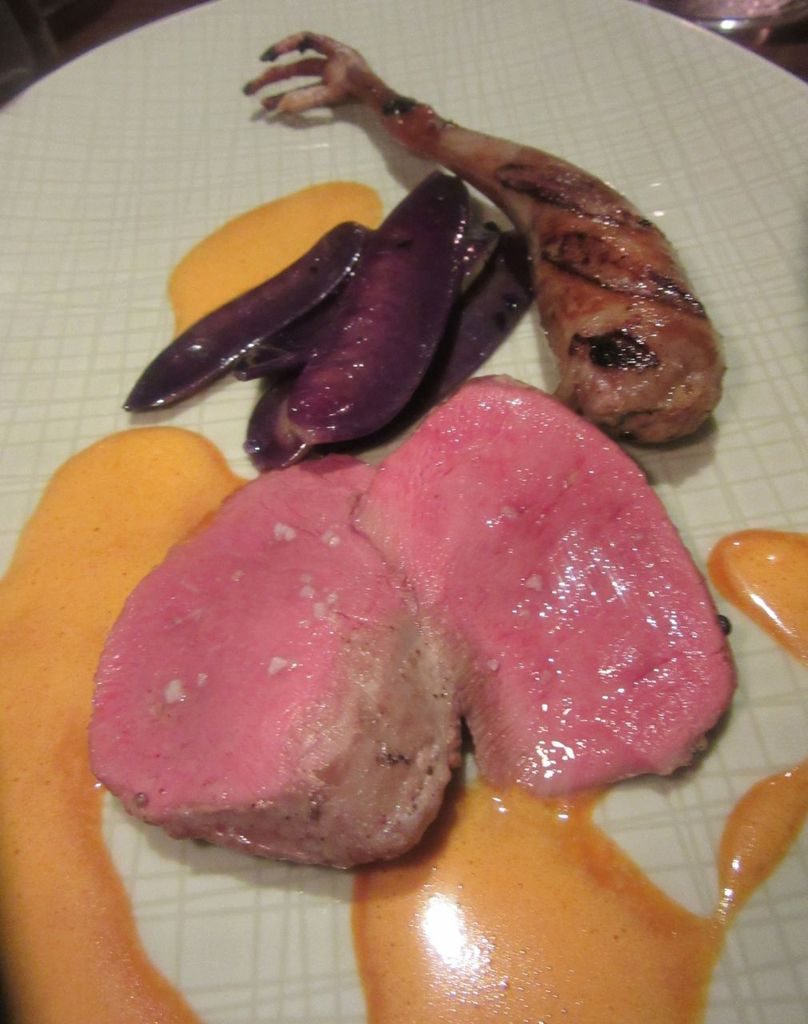 The squab is perfectly rare, it’s leg tender and juicy, but for me, the carrot sauce is too carroty.

Early as usual, I am escorted to a table. “We’ve designed the room to look like a townhouse,” my escort says, gesturing to the center service table with wine bottle holders and a vase of tall branches. The orchid light fixtures are unusual and handsome. But it’s not quite my fantasy townhouse. No armoire. No sofas. No wing chairs. No Oriental carpets. There are unopened gladiolas, and a chef’s table in front of the open kitchen — chairs on one side, a backless bench on the other. 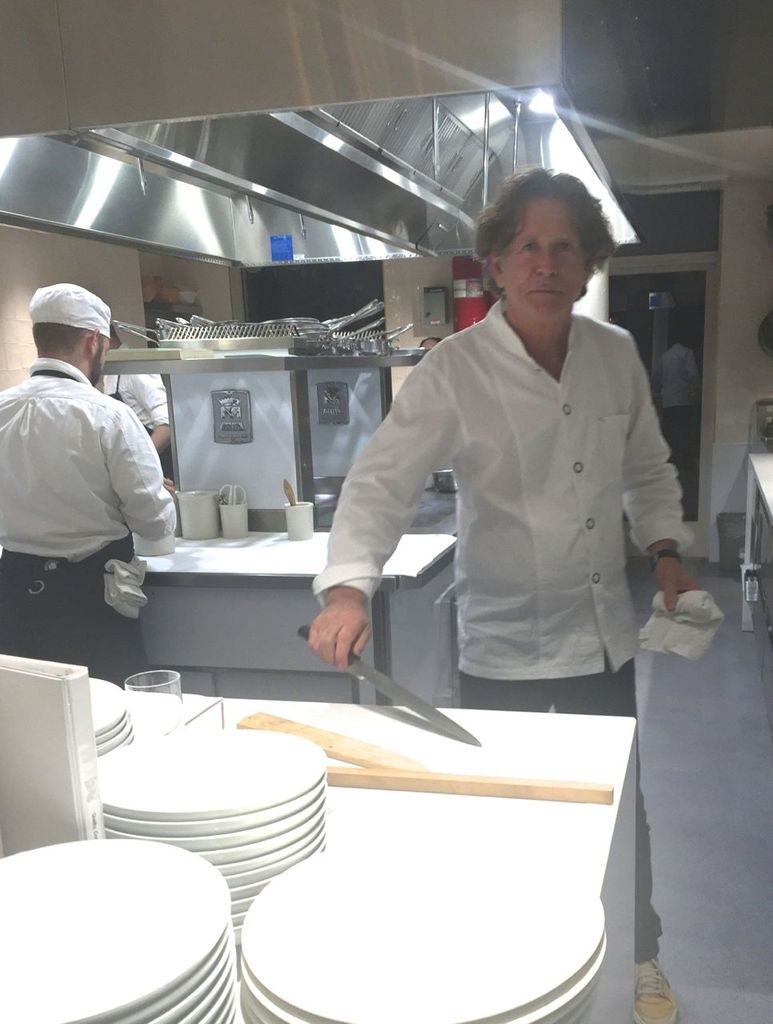 After several years as a consultant, the Atlanta star chef has decided to wow Manhattan.

I balance these quibbles against the feel of the expensive napkins, the flatware, the fragile crystal, the custom dishes. Tall white tapers burn quickly in the cooled air. This must be a trend. My friends and I used up three white candles at chef Daniel Rose’s Le Coucou the night before. There, it took two staffers to snuff out each stub and replace it. Here the wax is whisked away in its holder by one person, replaced with a fresh taper and then lit. This will be another three candle exercise. 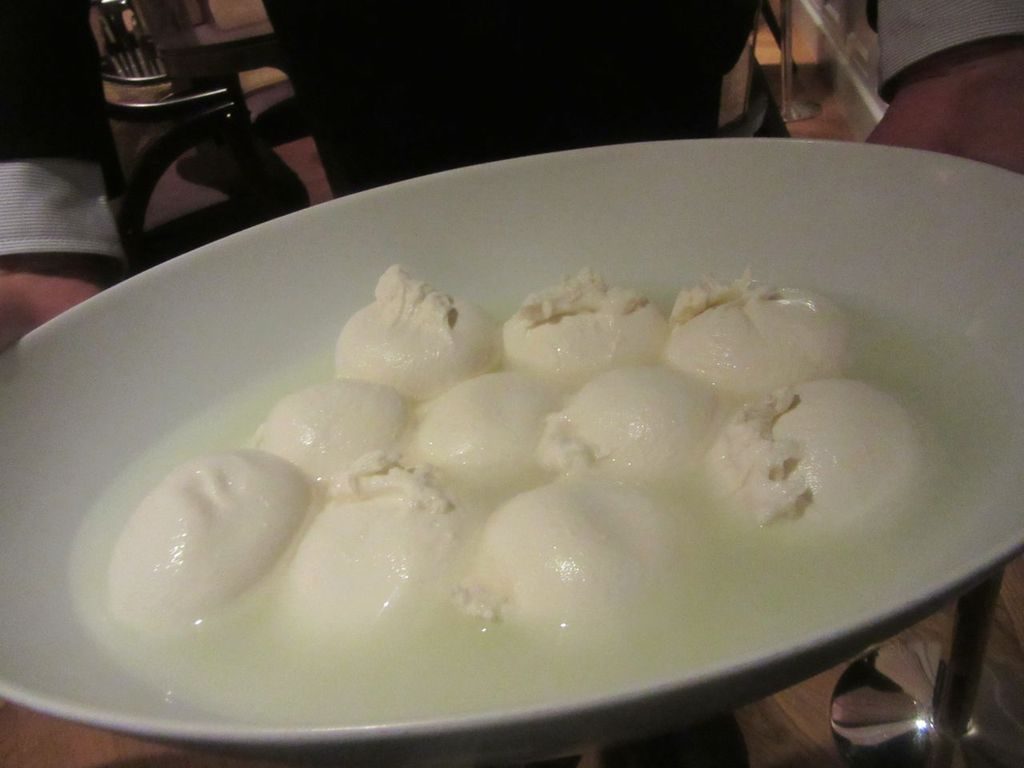 When you have a stash of burratas this beautiful, why not show them off?

Sometimes the plates are cleared promptly. Sometimes they’re left for us to stare at. “May I remove this?” a server asks of a quite-empty dish. “Why would I want to keep it?” I respond. Some courses arrive in what seems like a reasonable cadence. Some do not. 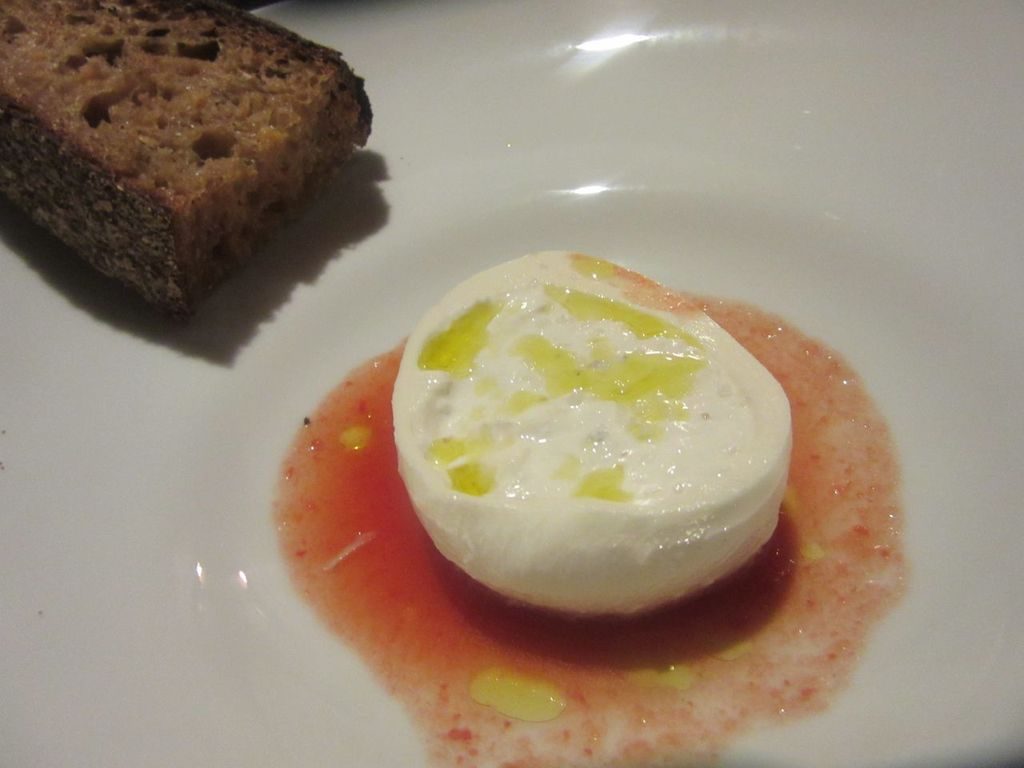 Burrata on tomato puree may be piled on High Street on Hudson’s rustic anadama bread.

Seeger has boasted of surrounding himself with a very young team. Indeed, most of the good-natured dining room cadets in dark suits still seem to be figuring it out. “Field training,” the chef calls it. I hear the rehearsal in our lead scout’s quaver, as when he assures us that the marvelous, barely cooked Bedford scallop wrapped in bay leaf is flanked with “chantals.” 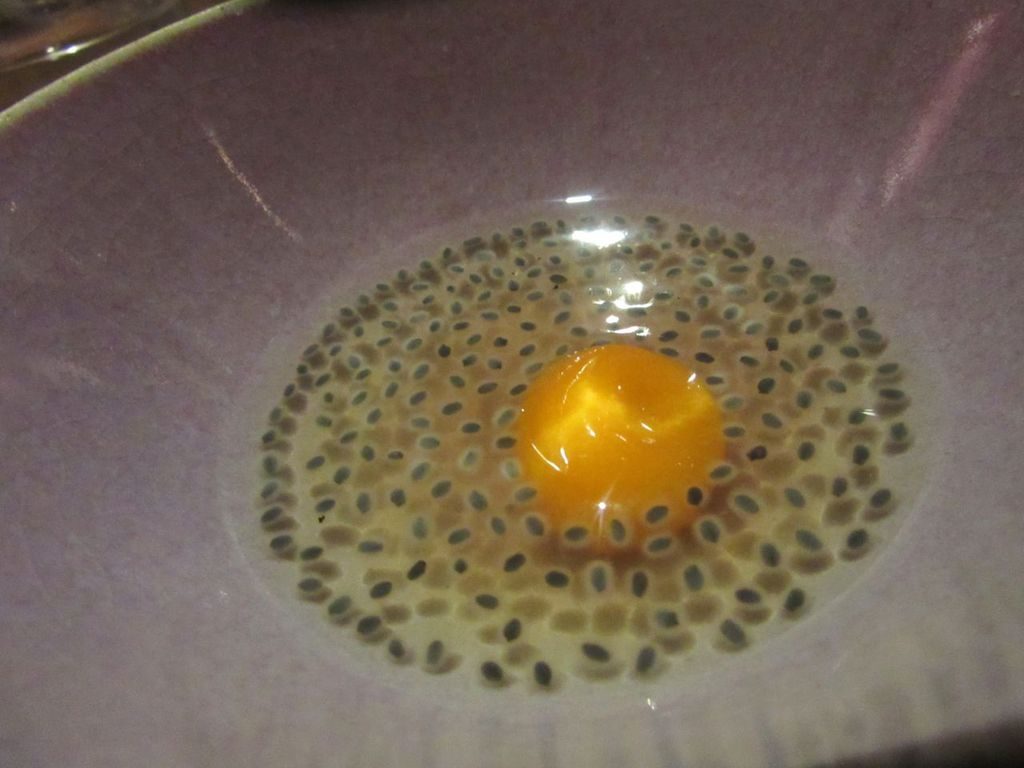 When kumquat soup with basil seed arrives, I know the seduction is near a finale.

At some point, a server parades a big bowl of oozing, creamy burrata orbs. I can’t remember if the burrata display comes before or after a delivery of thick and crusty brown bread.  “It’s the Anadama from next door,” the server identifies it. “I overheard you speak about it.” I’d thought about buying bread as I walked past High Street on Hudson to Seeger’s door, but noticed the bakery shelves had been cleared for the dinner hour.

Now, I’m wishing I’d brought a bigger purse to take home the leftovers after piling clots of burrata with its bright tomato passata on two or three crusty morsels. To have eaten too much and still be planning next’s day excess is in the foodie DNA. 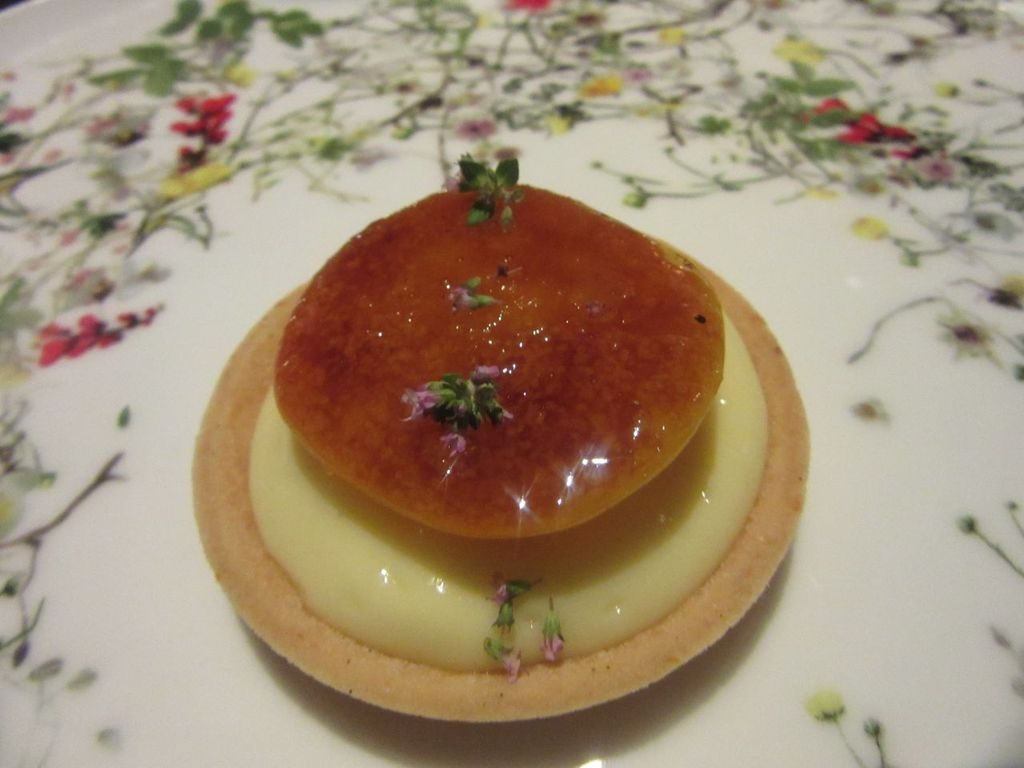 A brûléed plum tart on cinnamon pastry cream sits on a show-off plate I covet.

Friends from Atlanta have taken over the chef’s table, we are told, and it feels very late. The music has gone from classic to soft rock to psychedelic Pink Floyd. I’m happy to see the kumquat soup with basil seed because I know that means we’ll be paroled soon. The seeded syrup is unassuming, but the tang of the one bright orange kumquat is electric, sharp enough to wake a vampire in sunlight, complex enough to awaken me.

Sure enough, a brûléed plum tart on cinnamon leaf pastry cream follows, defiantly small in the middle of an oversized plate. A uniquely gorgeous plate. I’m not the larcenous type, but I can’t help thinking I’d need a computer case to sneak it out the door. 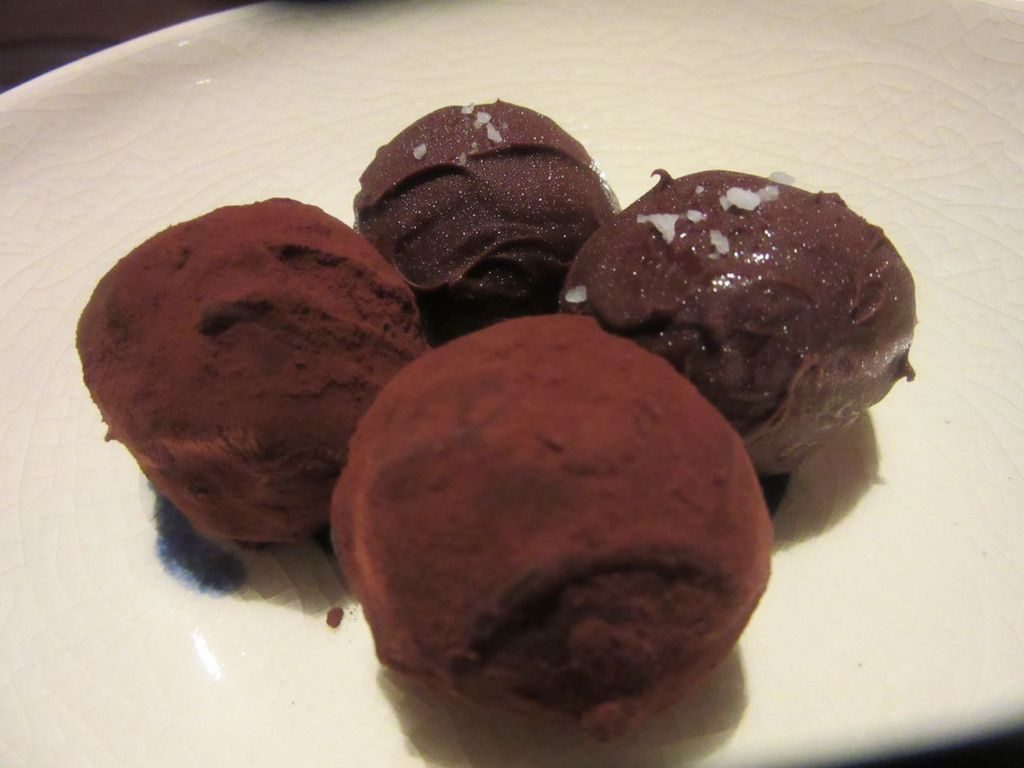 After an extended tasting, the truffle challenge – gianduja and 70 per cent cocoa bean.

Wilfred asks for the check. There is only the martini and the wine tariff to pay. A quartet of truffles come with the bill.  Two are gianduja. The others are 70 per cent chocolate, our now rumpled server announces. Wilfred has room for just one. I am only able to eat a small bite of each. The evening did seem to stretch painfully between tasting euphorias. It’s admittedly early in the field training. But if affluent food lovers are willing to accept the chef’s commitment demands and this place survives, I’ll hope to snare a Daddy Warbucks to finance my return.