“Oh no,” I groaned, when I walked into the Samuel J. Friedman Theatre, where the play Heisenberg is currently running, and saw that there was on-stage seating facing the main audience. That is a convention in theatrical productions that is often used, and I just hate it. I think it’s distracting looking at other audience members looking back at you. I find my eyes drifting toward the various rows, to see who is nodding off, who is yawning, or maybe even texting. To me, there is no redeeming reason to put hapless ticket holders on the stage (except, of course, to sell more tickets).

So, on stage seating is just one reason that the two-hander starring Dennis Arndt and Mary-Louise Parker, got me mad.

Another was that for the price of a Broadway ticket that starts at $160, to see two people circling each other on a bare stage with no set, (except for two chairs and two tables) is absurd.  The play written by Simon Stephens was commissioned by the Manhattan Theatre Club and it originally played off-Broadway, which is a much more reasonable  idea. Mr. Stephens adapted the fabulous The Curious Incident of the Dog in the Night Time, which I loved. But this play left me wondering, “why?” Heisenberg is about two people who meet in a London train station. She is forty something, he is seventy something, and despite their huge age difference, they have their loneliness in common and find a deep connection.

And then there are the two stars; Dennis Arndt and Mary-Louise Parker. 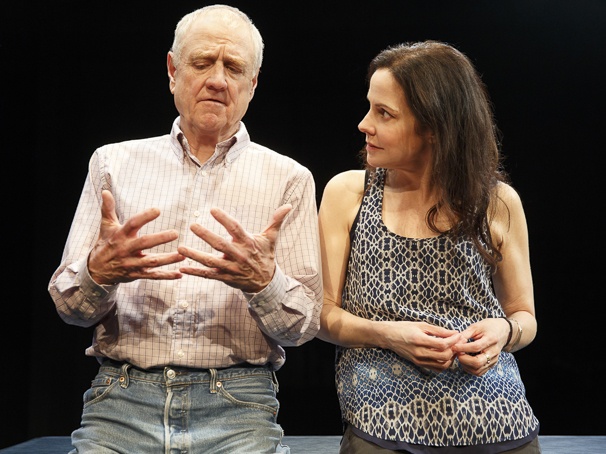 I have nothing but fine thoughts about Mr. Arndt. But most remarkable to me was Ms. Parker’s annoying pattern of speech and voice, delivered at the same level of whiny, screeching angst for the entire length of the 80 minute play. I couldn’t bear her voice and so I had to tune out.

I know this play, directed by Mark Brokaw, has gotten some rave reviews, but, mamma mia, I just wanted it to end.

The title, by the way, has something to do with math and quantum physics. Pretentious title for a little play that is best performed in an intimate space.

Conversely, I loved Holiday Inn, and not because it is a traditional old school musical, but because this show, with a sweet little story, along with great songs we know and love, is just so well executed.

Gordon Greenberg and Chad Hodge’s book was inspired by the classic film Holiday Inn, and we get to hear many of Irving Berling’s songs that are imbedded in the great American songbook.

Choreography by Denis Jones is outstanding, with a show stopping tap number that includes several of the uber-talented ensemble jumping rope while tapping. 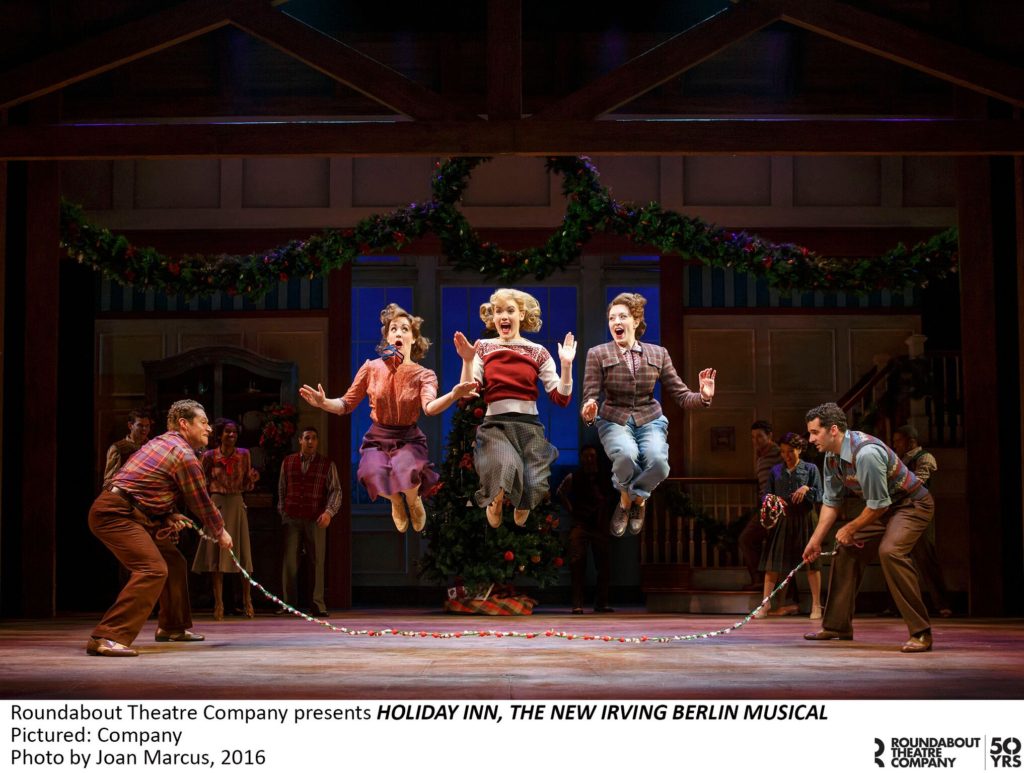 Holiday Inn is about Jim (Bryce Pinkham), an entertainer in love with his show biz co-star, Lila (Megan Sikora). Jim wants  to leave the business to settle down with her in a farmhouse in Connecticut. She decides to continue the act with Jim’s best friend, (the awesome Corbin Bleu) and heartbroken, he leaves the road for his new life in New England.  There, he meets a down-home school teacher, Linda (Lora Lee Gayer) and with the help of a gaggle of friends, turns the farmhouse into a place for performances to celebrate each holiday. Jim is falling for Linda, but then her talents are revealed, and she is offered a chance to go to Hollywood. Will she go, or will love prevail?

Get yourself a couple of tickets to go and find out. 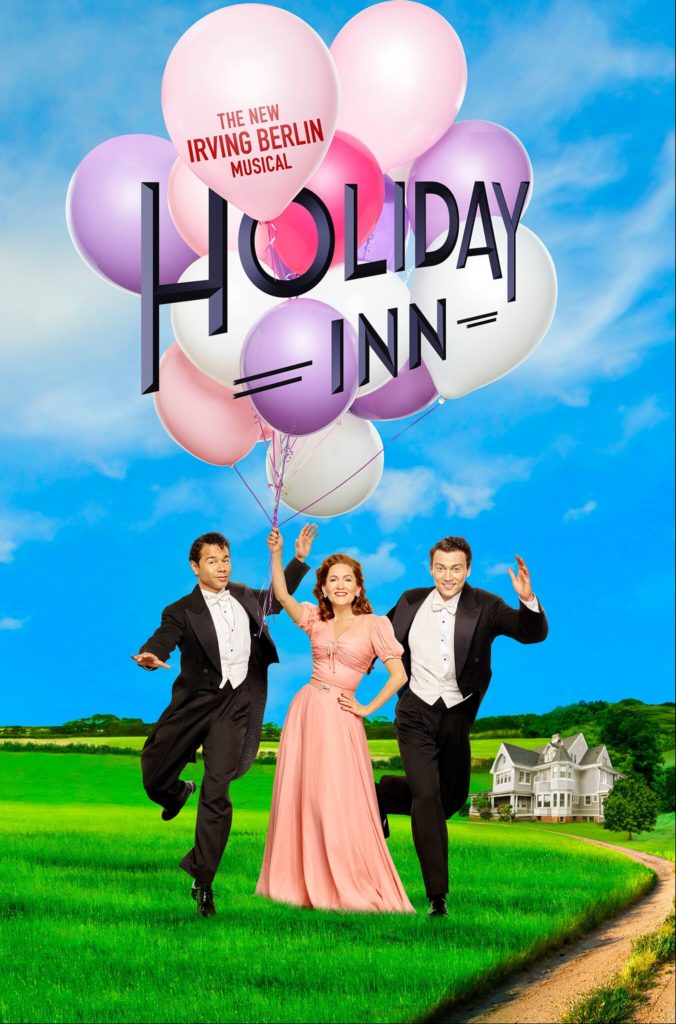 Between musical numbers you simply can’t not enjoy,  fabulous dancing and singing, great sets and a terrific cast, Holiday Inn is the place to check into this Fall and Winter. Directed by Gordon Greenberg, Holiday Inn has a limited run through January 1. www.roundabouttheatre.org

A couple of upcoming performance events that are really outstanding: 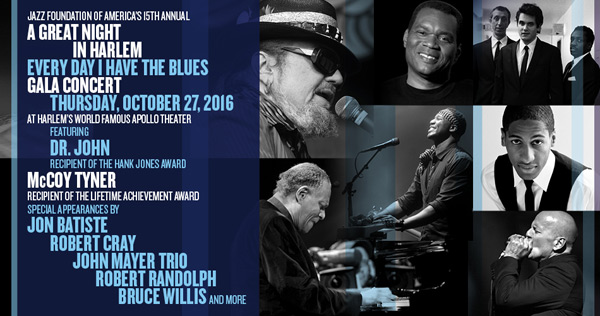 Next week’s gala will be hosted by Danny Glover and Joe Morton, and will honor Dr. John and McCoy Tyner. Additional performers include the John Mayer Trio, Jon Batiste, Bruce Willis, Robert Cray, and Robert Randolph. Go to www.jazzfoundation.org
And on the very same night (Oct. 27), the New Jersey Theatre Alliance hosts their 35th annual gala at the spectacular Pleasantdale Chateau in West Orange.
Broadway star Brian Stokes Mitchell will perform and help to honor Joe Benincasa, President of the Actors Fund, and Johnson and Johnson.

Another highlight of the evening will be the live auction offering tickets to bid on for the impossible to get into Hamilton. Go to www.njta.org