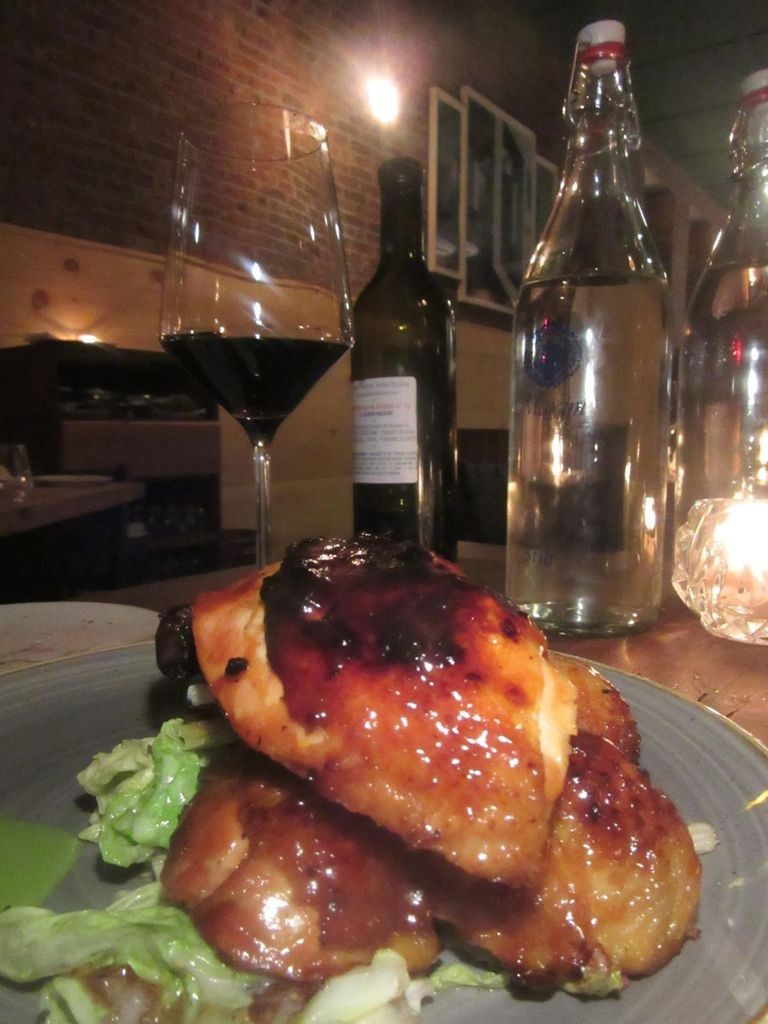 A giant half of luscious Sasso chicken yakitori definitely diluted my annoyance at Lowlife.

Lowlife opened in late December, but I probably waited till January to call for a reservation and was offered a table at 5:30 or 9 p.m. My assistant dialed and gave another name, of course. I might not remember the precise details of the brush-off each time, but there was never a table free at 7:30 in the half dozen or so times we tried. I can’t recall exactly when it landed on the Eater Heat Map. 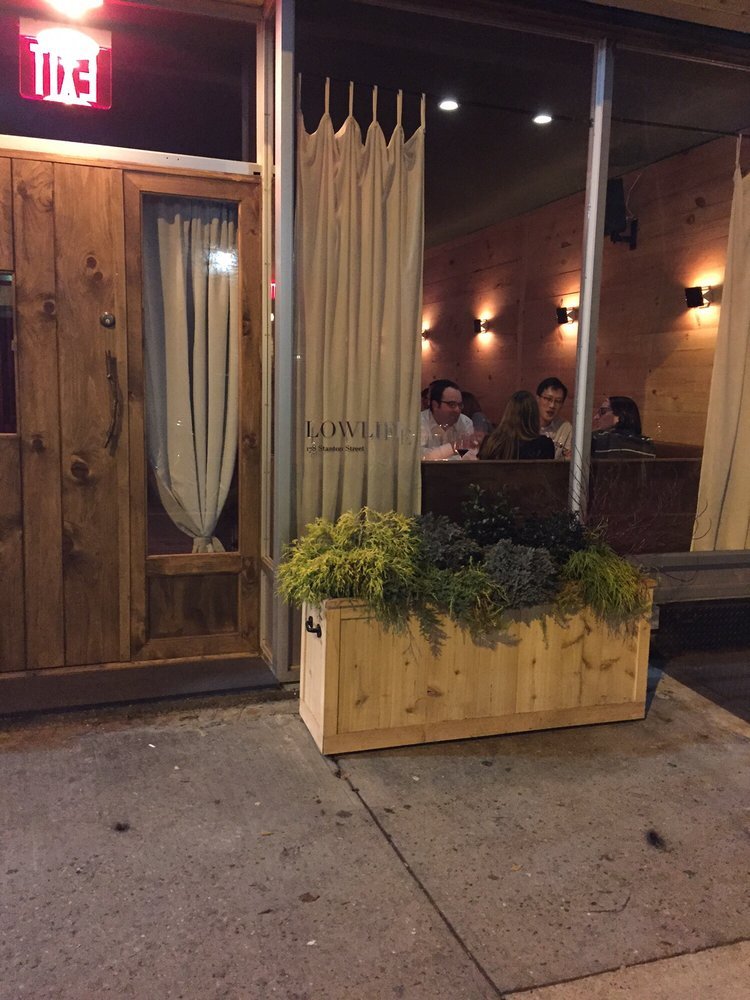 Lowlife’s facade is a welcoming presence on a street that was hugely populous in the late 19th century.

But then, suddenly, an opening blossoms on a not-so-distant Monday. The anonymous me can’t have 7:30, we’re told, but I can have 7:15. I snap it up. There’s a vacant place to park across the street on Stanton, east of Clinton. It’s only just starting to drizzle. Is it yet another amazing omen?

The three of us step into a rough, wood-clad entry, just two minutes late, and are led past the bar, beyond multiple tables for two, mostly empty, and a scantily-occupied counter at the open kitchen, then up a few steps to a darkened stage, all to ourselves. Cozy, I think. Is this Lowlife’s staging area for people-we-don’t-know? I can’t help wondering why it was so crucial we arrive at 7:15.

“I’m freezing,” I say. “I’d better get my scarf from the checkroom.”

“There must be a window open,” my friend Danny decides, pointing out fabric rippling overhead. “It’s hitting me right on the chest.” We consult the waitress about moving to an adjoining table. But that’s in a chill zone, too. “Maybe you could turn on the heat,” Danny suggests. She runs off, hopefully to alert the heat keepers.

She is J.J., she announces on her return with our wine — a delicious Spanish red from Duero (just $50) — and she will explain the philosophy of the menu (in the event we have never read Sartre perhaps). It’s a modest list, just 14 items on a narrow slip of beige paper dated March 14, 2016, mostly eclectic contemporary, with borscht and a platter of herring and sardines that might be a nod to the Lower East Side neighborhood.

“It goes by size,” she points out.  The borscht, leading off at $10, is only two or three spoonfuls. The next item, fluke with hackleback caviar at $18, is a bit larger. Dayboat scallops with pickled chanterelles, at $20, offer four or five bites. And so on. “Each person will want to order at least three dishes,” she sums up firmly. 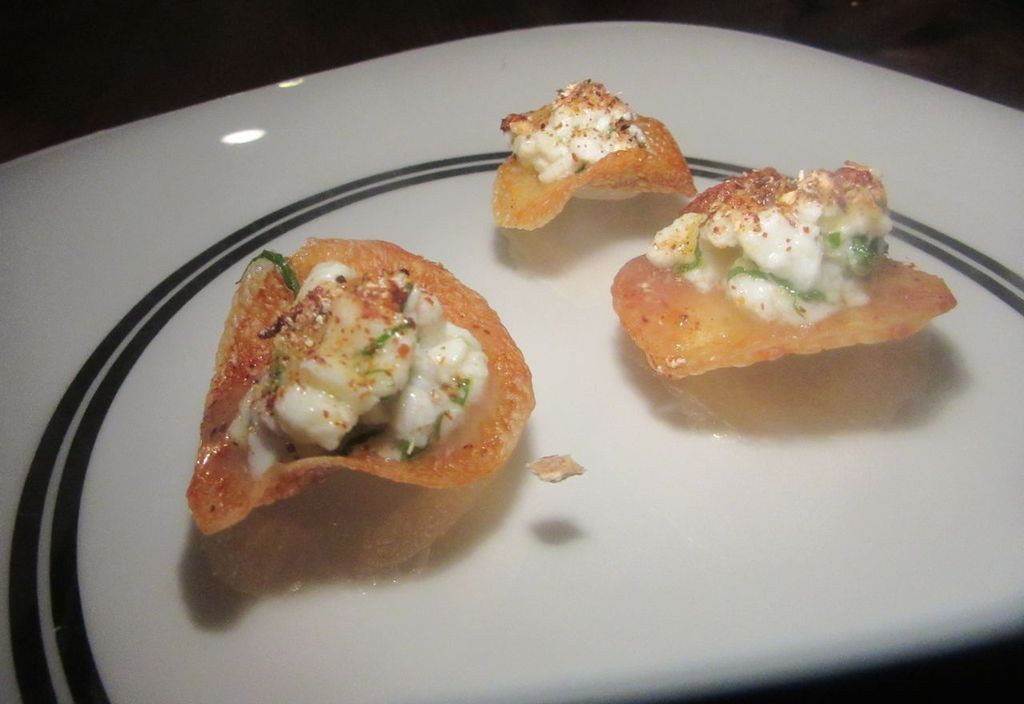 This photo doesn’t show how small the house-made seviche-filled potato chips are. Take my word.

It is now noticeably warmer. We’re feeling the heat, a flush from the very good Castrillo de Duero, and a rush from the drill sergeant in J.J.’s voice. Nicole asks her to check with the kitchen that the lobster and the tilefish are gluten-free. J.J. returns with good news for Nicole, and the amuse. It’s an itsy dab of black bass ceviche with ponzu aioli in three small house-made potato chips. She annotates, pointing.  Nicole is wary. There is soy in ponzu and soy can have gluten.

“We make our own ponzu,” J.J. defends, promising that it’s all gluten free.

“If they make the potato chips in house, you’d think they could make them a little bigger?” Danny mutters. Nicole decides not to eat hers. Danny offers it to me. I take a half-inch bite and insist he finish it. Is it wonderful? Well, almost. It’s over so quickly, I can’t be sure. 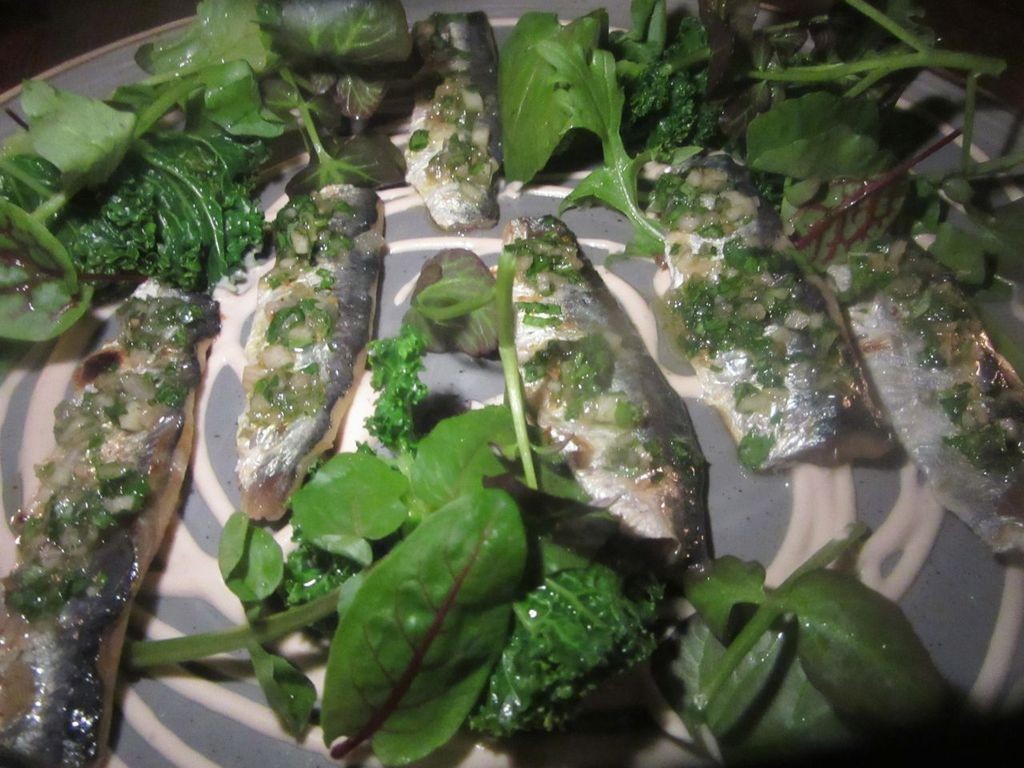 “Would you like some bread?” J.J responds. We confirm our interest…it would be nice to have something on the table. The bread is sourdough. The butter, she informs us, is “churned in house.”

We’ve each ordered two dishes. Filets of herring and sardines with dribbles of chimichurri glisten silver under a tangle of raw greens on the plate in front of Danny. It’s not a dish I would normally order, but I’m triply impressed — by the freshness of the fish, the rich saucing and its gorgeous dress. I imagine framing it. 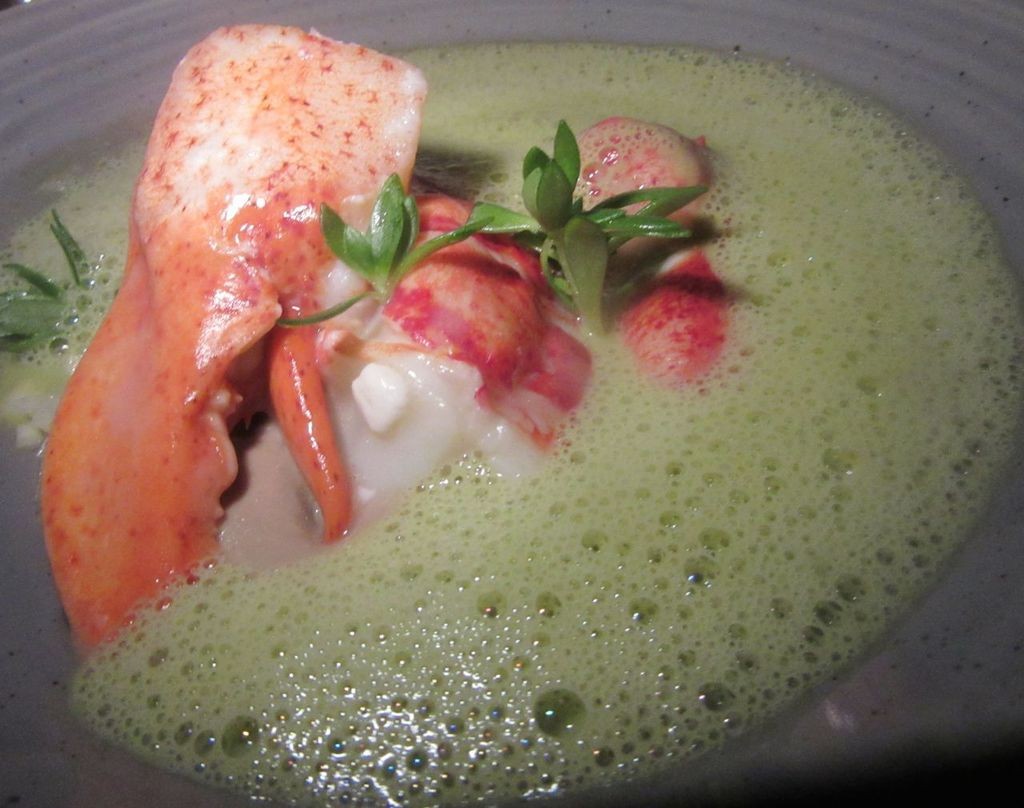 Delicately cooked lobster, including a claw, floats in a sunchoke-tarragon cream.

A small but precious portion of lobster is exquisitely cooked, afloat in a foamy tarragon broth thickened with bits of sunchoke (two of Nicole’s favorite things, she notes, lobster and sunchoke). She is in bliss, although I notice she leaves the part of the claw that is nearly raw.

My starter, acorn squash alongside maitake mushrooms, house-made tofu with ribbons of Treviso and thin curls of marinated squash, fills up the pottery plate. Something is over-salted. I don’t love every part equally, but the generous sprawl counteracts the tendency to be overly Fabergé.

Anyway, people are arriving, filling the 62 seats. It’s 8:30 going on 9. I can’t see all the way to the front, but we have company now on our balcony. Maybe by requiring us to arrive at 7:15, they mean us to be signing out. But there has been a long pause between courses as if J.J. was waiting for us to finish starters before ordering our second dishes.
Danny’s grass-fed rib eye cap is small for $44, not really rare as ordered, and very salty, too. Thins of Asian apple pear alternate with gem lettuce, alongside. And there’s an artistic bullseye of sauces: the green of nettles inside a ring of yellow bagna càuda. Mussels are hidden under a leafy camouflage of sorrel, next to Nicole’s $30 languorous filet of tilefish with its skin in crispy curls, carefully cooked.

Maybe it’s the Sasso chicken yakitori that has taken so long. I’d ordered the $32 half.  “It’s very large. It’s a whole half of chicken,” J.J. has warned. “You’ll have to take some home.” She’s right, it’s a very large chicken — not a fact that would ever make me unhappy. Certainly not in the case of this creature. The sauce is sweet and sticky, and the flesh of the bird is exquisite. It wears ruffles of smoked cabbage. All three of us share, but it seems impossible to finish. It will be tangy and lush the next day on my salad at lunch.
It seems like we’ve been indentured guests at Lowlife for hours. I try to get J.J.’s attention to select desserts, but she has become involved with the new arrivals, and when I finally catch her eye, she runs off in another direction. A floorwalker, maybe an owner, stops by to ask how we’re doing. He gets the complaint and summons a passing waiter to hear our order. 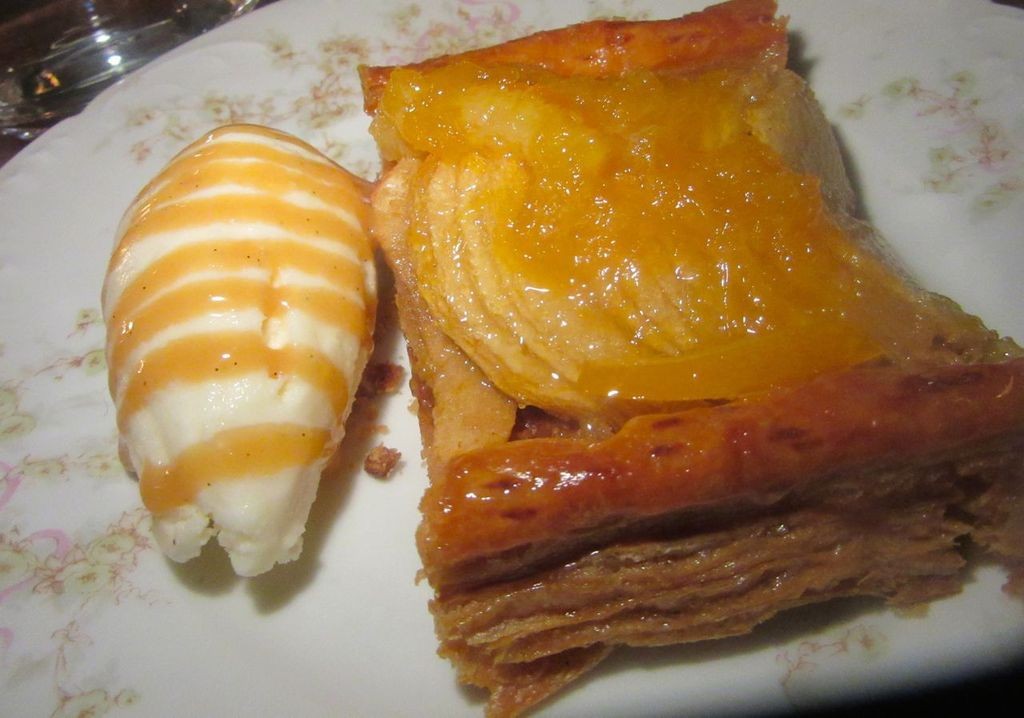 The Neversink apple tart is too sweet for me, its dulce de leche ice cream tastes buttery.

I’m not tempted by raw milk cranberry compote on the very same day I read about someone dying from eating raw milk. Better, we decide, is the dulce de leche ice cream, made in house, I bet – over-churned, almost buttery, striped with caramel alongside a clumsy Neversink apple tart.
The celery and Bosc pear panna cotta is a bomb at our table, gift of our wayward server or not.

J.J. returns to say the panna cotta, a strangely hideous concoction of celery and Bosc pear, is her gift. “It’s like something you’d find at wd-50,” says Nicole. Sorry, Wylie.

I can’t say that the triumphs of Lowlife, even that remarkable bird and the very good fish, outweigh the reservation run-around, the very long commute from uptown, or the annoying superiority conveyed by our server.
A former chef de cuisine at Blanca, Lowlife’s Alex Leonard is used to cooking on stage.

I consider Lowlife a symptom of 2016 ambition in restaurants. Alex Leonard, a chef de cuisine at Blanca, and Hugh Crickmore, once a partner at Mas, are definitely reaching for originality. And sometimes, it works. I probably won’t be back, but I would recommend it for the curious and the patient, especially if you live in the neighborhood.
Partner Hugh Crickmore’s fantasy of Manhattan as a Bruegel Tower Of Babel makes me smile.

And about the partial view of Pieter Bruegel’s “The Tower of Babel” on a card that comes with the bill – it amuses Crickmore because it reminds him of a Manhattan skyscraper with the Hudson flowing beyond the port. You’re welcome to take it home. It may remind you to pull down your shades.