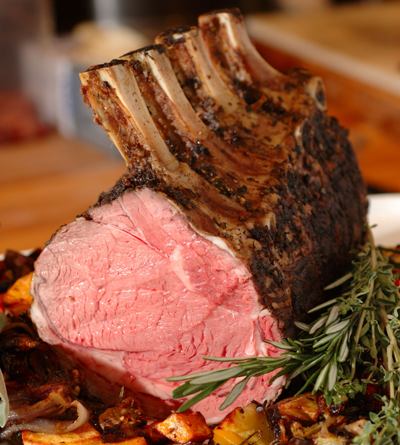 For some reason, I have been getting more questions about rib roast than ever before. Maybe, finally, everyone is realizing that beef tenderloin (filet mignon), although it is the most tender cut of beef, and because it the priciest, seemingly the most luxurious, it is also the least flavorful cut of beef. It a great cut to use as a foil for a sauce or elaborate presentation, but when you want an impressive hunk of beef, a great roast, nothing compares to a standing rib roast. Okay, I also love a whole shell of beef for roasting – you know, what you get as a sirloin strip, aka shell steak, aka New York strip steak at the steakhouses, but all in one long roasting piece.

When the subject of rib roast came up on Food Talk recently, my dear friend and former Daily News colleague Suzanne Hamlin called in to tell us that she had unearthed the following recipe. I have been dying to try it (and eat it), and thought I would before putting it in The Maven’s Diary, but I haven’t had the chance. So here it is. It must work. It comes from three unimpeachable sources. Read on.

This is from The Best American Recipes 2000 by Fran McCollough and Suzanne Hamlin, but they excerpted it from The Best of Craig Claiborne by Craig Claiborne with Pierre Franey, edited by Joan Whitman. Claiborne, in turn, got the recipe from Ann Seranne, who, ironically, I remember mainly for her book on vegetarian cooking, “Good Food Without Meat”(long out of print), written at a time when vegetarians were still considered kooks.

“This unique way of cooking perfect roast beef has achieved cult status. No elaborate set of instructions, no annotated treatise on the art of roasting, has ever matched this simple formula.

The recipe first appeared over 20 years ago in an article Craig Claiborne wrote in the New York Times about Ann Seranne, a food professional whom he called ‘an innovative genius in the kitchen.’

In that article, Claiborne published five or six recipes of Seranne’s. While all of them became beloved standbys, this is the one people remember best. As the original printed recipe became harder and harder to find, we’ve gotten calls — at least 15 in the past decade alone – asking, ‘Do you have that recipe for the high-heat roast beef?’ By some miracle of timing, the recipe has been restored to print in this new collection.

The roast will be in the hot oven (make sure your oven is well insulated — see note) for only 25 to 60 minutes depending on its size. But start at least 5 hours before you want to serve it, which will allow time for the roast to reach room temperature and to finish cooking in the turned off oven. It will have a crunchy brown exterior and will be perfectly cooked inside to that medium-rare state that most people prefer. Center slices will be rare.

The infallible formula has another bonus: Once out of the oven, the roast can wait at room temperature, and retain it’s internal heat, for up to four hours before serving. While it is resting comfortably, the oven is freed up for whatever else you want to make. The crucial instruction is not to open the oven door, not even for a peek while the roast is in there. Trust us: It is doing beautifully undisturbed.

Cook’s notes: Don’t attempt this recipe if your oven isn’t well insulated — that is, if it is extremely hot to the touch on the outside when it’s in use. (Most commercial ovens are not well insulated, which is why restaurant kitchens are so hot.)

The most delicious and most expensive roast will be a dry-aged, USDA prime roast, which has to be ordered from a quality butcher well ahead of time.”

Remove the roast from the refrigerator 2 ½ to 4 hours before cooking, the longer time for the largest roast.

Preheat the oven to 500 degrees.

Place the roast in a large, shallow roasting pan, fat side up. Sprinkle with a little flour, rubbing it into the fat lightly. Season with salt and pepper. Put the roast in the oven and roast according to the chart below, timing exactly. When the cooking time is up, turn off the oven. Do not open the door at any time. Leave the roast in the oven until the oven is lukewarm, about 2 hours. If you need to use the oven to cook something else, tent the roast loosely with foil to keep it warm and remove it from the oven.

To make a thin pan gravy, remove the excess fat from the meat drippings, leaving any meat pieces in the pan. Stir in the beef broth. Bring to a boil, scraping the bottom of the pan to loosen the meat pieces. Simmer for 1 minute and season to taste. Serve hot.

This works out to be about 15 minutes per rib, or approximately 5 minutes cooking time per pound of trimmed, ready-to-cook roast.

If you prefer medium-to-well-done beef, add 10 minutes to the maximum cooking time for each size roast.