Holding Out For a Hero? HERO UNDERCOVER has 25 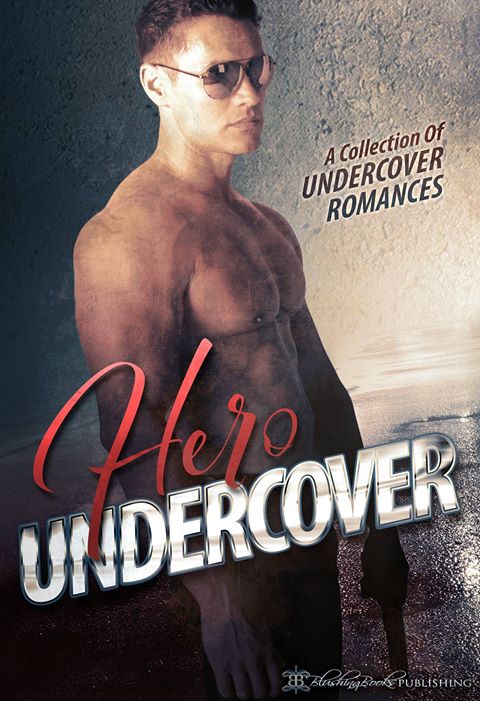 I cannot wait for you to meet my new alpha hero with a heart, Detective Hercules. Sigh.

He’s featured in the new HERO UNDERCOVER Box Set. I am joining with 24 other authors to bring this exciting collection of hot heroes your way. This sizzling compilation includes military masters, determined detectives, and rope twirling cowboys. It’s great beach reading for anyone who likes sexy, commanding alpha males.

Order the book now to lock in the low price of 99 cents — for all 25 books! It goes up to $6.99 soon. It’s available on Apple/iBooks, Barnes and Noble and Amazon. 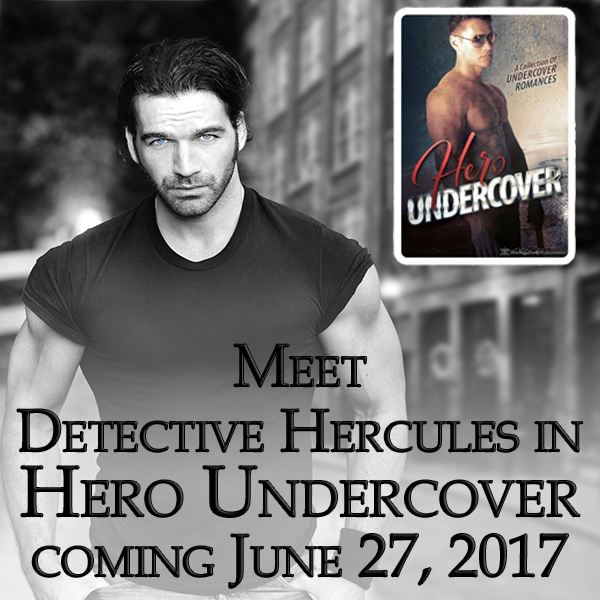 Detective “Herc” Hercules Anderson is working the desk, and answering phones in his Manhattan police precinct. Due to a hand injury, he’s been pulled off his undercover assignment and he’s more than a little disappointed and bored to be on paperwork detail.

All of that changes, when early one morning he takes a call from a woman with a sultry, sexy voice who needs assistance. Not the standard call he is used to―she needs first-aid advice for a possible broken toe. During their conversation, something pulls him in. He gives her advice and arranges medical care for her, instead of referring her to 911.

Lizzy Harper, a radio dating expert with a hyper-sexual drive-time show, is taken aback by her feelings for the detective who helped her. Details of her experience with him become the talk of her show the following morning and the NYPD is not pleased.

Herc, to save the department embarrassment and protect his job, must go undercover as Lizzy’s boyfriend to ease the media uproar. During this undercover assignment, he discovers Lizzy has more than just fans of the show, someone has a sinister motive. He makes a pledge to protect her. During their time together they find that their phone meeting may be karma, as the sparks between them start to fly.

Can Herc uncover the threat and keep Lizzy safe? Will he still have a job when the assignment is over? Will Herc’s undercover assignment become personal and permanent?

A Taste for Red by Piper Stone
Tempers flare when Private Investigator Shanna Jacobs and cowboy detective Cody Walker are forced to work on a wine fraud case, but their hot attraction is undeniable. The case moves into dangerous territory when the key players aren’t what they seem, but if Cody and Shanna can solve the case, will they put their pride aside and let their passion take hold?

Justice, Roughly by Amelia Smarts
An undercover deputy must decide where his loyalties lie–with the law or with the beautiful criminal who rescues him.

The Strategy of Love by Alyssa Bailey
Part time photographic Journalist and benevolent worker Kayla Rhea was not haunted by the memory of her kidnappers but of her rescuer and his admonition. Ex-Army Major Hunter Barrett, settled in his civilian life, is now on a mission to claim the woman of his dreams or purge her from his life forever.

The Arms I Run To by Stevie MacFarlane
Can a woman be too smart for her own good?  Apparently, for when Joy Bradley takes a position she’s overqualified for, she soon finds herself up to her neck in trouble.

Uncharted Waters by Maisy Archer
An undercover protection detail aboard a luxury cruise ship seems like just the kind of easy, straightforward assignment Lucas needs … Until he learns that the client he’s tasked with protecting is the one beautiful, headstrong, infuriating woman he’s never been able to get out of his mind.

The Ranger’s Shotgun Bride by Maddie Taylor
Having fallen hard for her father’s hired man, Amelia is crushed when she learns he’s behind a string of stagecoach robberies.  When she takes matters into her own hands, and goes after the bandits herself, she learns things aren’t always what they seem.

Revenge Served Hot by Sophie Kisker
My name is Livvi, and for the next thirteen months I’ll be on my knees, paying off my father’s debts, owned by a man who seeks to destroy me. My life looks painfully short, until a man with a dark past offers to rescue me – but only at a price I’m terrified to pay.

The Mercenary’s Girl by Emily Tilton
CIA operative Jack Regensburg would have had enough trouble taking down mercenary kingpin Sir Jeffrey Young even if he hadn’t fallen helplessly in love with one of Sir Jeffrey’s captive girls, the lovely young Tess Roberts. When Sir Jeffrey decides that Jack, undercover as a bodyguard, must punish Tess in a new and extremely humiliating way, Jack must act, but will he be able to save Tess from Sir Jeffrey’s fury without putting his cover, and the crucial operation, at grave risk?

Cherry on Top by Katherine Deane
What do you get when you combine a sassy, curvy baker, her overprotective brother, his hot Army best friend, a crazy stalker, sexual chemistry hot enough to bake a chocolate cake, and nuns? The kinky spankings Cherry has always desired, a bit of Daddy talk Jacob loves, and a recipe ending with a Happily Ever After–and a Cherry on Top.

Saving Sarah by BJ Wane
When Sarah Thompson goes husband hunting at a local night club, she attracts the attention of a serial GHB rapist.  Police Chief Travis Nolan intends to be the man in Sarah’s bed and won’t let anything stand in his way, including Sarah’s stubborn tenacity.

The Honey Trap by Lucy Wild
Nate – I went undercover to get the place shut down. Not to fall for her…
Kathryn – It was just a job. Until he arrived.

The Scarlet Stiletto by Maggie Carpenter
1940’s Murder Mystery.
A frantic but beautiful woman bursts into the office of a roguishly handsome detective and begs him for help, claiming she found her red stiletto at the scene of her husband’s murder. The sexy seductive siren with kiss-me-now lips is hard to resist, but he quickly discovers there are gaping holes in her story.

The Russian by Renee Rose
Yuri – I don’t care if I get whacked by the mob or fired from the FBI. I can’t stay away from her. And there’s no way I’m letting her get hurt. Hell, if any of them touch her, I’ll blow my cover in a second.

A Thief for the Duke by Megan Michaels
Rescuing a thieving beauty from the prospect of prison, the Duke of Norfolk has taken on the role of Headmaster for a School for Wayward Women under the guise of reforming the waif into a lady of society. Will it be she who is reformed, or will it be he who is changed in the process?

Tamara’s Choice by Trent Evans
Assigned to infiltrate the shadowy Dominion Trust, a vice cop on deep cover visits the lurid, penitential installation known as The Farm.
But to rescue one of the beautiful inmates from her sentence of sexual slavery, he must save something else first — himself.

Testimony by Maggie Ryan
Vows–hers to tell the truth, the whole truth and nothing but the truth–his to protect the witness with his very life. But when both are up against pure evil, what will the ultimate price of justice be?

Her Protector by Annabel Joseph
Rowan Park works in a secret, hyper-secure area of the government, defending the homeland from malicious hacking attacks. When a kidnapping attempt threatens her life, she’s forced to seek shelter–and comfort–in an unexpected protector’s arms.

Monster by Jennifer Bene
Cold, ruthless, vicious… I’m Paulo García’s monster, and I’d swallowed that bitter pill whole, learned to deal with it — until Nicky. I know I should try to help her, protect her, but then who will save her from me?

Her Undercover Doms by Anya Summers
Sherry can’t believe her luck, she followed a Dom to the Bahamas only to have him fall for another submissive, and to make matters worse, that same Dom has issued her an ultimatum, either submit to the handsome Doms Patrick and Nick to become a better sub or leave the island. Will the two undercover CIA Agents convince the gorgeous beauty that she is the submissive for them or will their undercover investigation tear them apart?

A Night by my Fire by Addison Cain
The risk River had taken saving a stranger bigger than a linebacker and as grateful as a psychopath put her in a bad position. Someone had left him to die… and good men didn’t get dumped in the cold.

The Officer’s Little Girl by Meredith O’Reilly
Adam is assigned to go undercover at ‘The Little Resort’ and take down the owner who has been selling illegal drugs. He gets partnered to be Chloe’s Daddy and ends up falling head over heels in love for his little girl.

Pandora and the Pool Guy by April Hill
Forced to enter the Witness Protection Program, Pandora finds a mutual attraction with the pool guy. But is he really just the handyman next door?

In Too Deep by Claire Conrad
One chance encounter is all it takes for hard-ass undercover agent Jace Montgomery to fall in love. When the woman who stole his heart is taken hostage, he’ll destroy anything and everything in his way to save her.