Hot n’ Sexy for a Cure

Interview with Tara Oakes About HOT N’ SEXY FOR A CURE 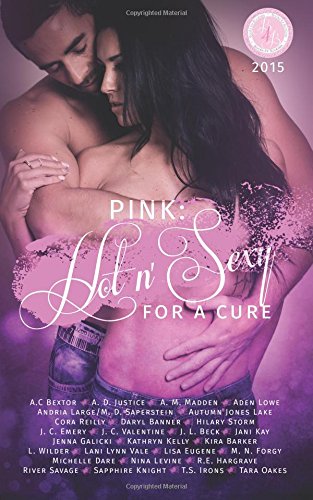 I met Tara Oakes at a casual romance author’s dinner last Friday when she welcomed me warmly to the table and gave me a copy of PINK: Hot n’ Sexy for a Cure.  It was fascinating to hear strategy to raise money for breast cancer quickly and effectively while helping avid readers of sexy romances who are going through cancer treatment.  The book also brings together a great group of 28 authors and provides a fun, hot read for anyone who loves steamy love stories.

Tara explained that PINK: Hot n’ Sexy for a Cure was released only for the month of October, in honor of Breast Cancer Awareness Month.  This blew me away. It goes off the market at the end of this month! I had never heard of such a thing in publishing, but it makes the book so much more meaningful and it also allows for the rights to be redirected back to the authors in a short time period. Tara is part of a huge and growing community of Independent authors, also called “indies.” Not hindered by corporate protocols or the long wait for publication dates in traditional publishing, indie authors have greater flexibility to pull off a project like this.

Wish I knew about it in the beginning of the month but there is still time to grab your copy. If you are able, you can pay the full price for the 546 page book in paperback. Or it’s only 99 cents on Kindle!

An author in the “Romantica” genre, Tara also has a steamy story featured in the anthology. It’s about a gorgeous, bad-ass FBI agent and a beautiful, ambitious political aid from her book, Pretty Boy–definitely for readers over 18! Her other books include: The Kingsmen MC series and the brand new Slayers MC, a light mafia series; the Chianti Kisses series; and a paranormal romance/historical fiction series, My Soul to Wake.

I spoke with author Tara Oakes about the anthology and her group, BOOKS FOR BOOBIES.

You are the mastermind and organizational mistress behind PINK: Hot and Sexy for a Cure: The Books for Boobies 2015 Anthology. What inspired you to do this book?

I started BOOKS FOR BOOBIES last year in memory of my grandmother who had passed from breast cancer. I have many readers who had mentioned in postings or casually how they had been, or were currently, cancer patients. I saw some of their daily blogs giving little snippets as to how they were getting through treatments and realized that those who were avid readers were relying on books and the whole indie book community just a bit more through their ordeal. As an author, I wanted to do something to help.

You began fundraising efforts last year, but it evolved into a bigger project this year.

Last year, we held a weekend long online auction which raised nearly $1000 in donations directly to the National Breast Cancer Foundation (NBCF). This year, I wanted to give readers something tangible that they could hold in their hands, whether in paperback or on their kindle, that would speak directly to them about such an important cause. I’ve networked with many wonderful authors in my career and found just the right bunch to help put it together. They all donated their time, their words, and their story’s to help put the anthology together.

Where do the profits go this year?

The profits are being donated to The National Breast Cancer Foundation, the charity we also worked with last year. Every single cent of royalties is being donated to NBCF and I’m proud to say that we’ve already doubled our donation from last year! They provide free and low cost mammograms to women in need.  We researched many charities before ultimately deciding. We feel that at this point, NBCF is the charity that can best benefit from donations.

Why is the book only available for October?  How does this one month sale period help raise money?

With October being Breast Cancer Awareness Month, it was a no-brainer to put the book out to help mark the occasion. But, I wanted to make sure that the book really stood out for being directly related to the cause. I chose to have the book available for a limited time to really encourage readers to pick it up and be a part of our journey rather than keep it on their wish list and on the “back burner” of their TBR (To Be Read) list. What better way that to make it a “special” book that would need to actually be purchased before it disappears, rather than admired from afar? Once the book is taken out of publication, those who own a copy are part of the select group who helped to make a difference by providing the funds that will make free and low cost mammograms available to women who need them.

What inspires the authors to share their work for free for this cause?

When I started publishing, I knew NOTHING about the indie world. I was amazed at the wonderful readers who were willing to take a chance on an unknown author and buy their books. I learned about the amazing authors who give so much of themselves by sharing their hopes, their dreams, and their fears with others through their words. Indie authors give part of themselves every single day to their fans, their readers, that it’s only natural for us to not even bat an eye when we’re asked to give more. Let’s face it… we’re not in it for the fame. Most indies don’t use their real names, don’t gain huge notoriety besides the few that strike it big. We’re rewarded in other ways, such as the little messages from a fan that loved our book and was helped through a tough time because of it. I had no doubt that when I asked my colleagues to give just a bit by donating their pieces for the anthology that they would step up, but I was amazed at just how many of them wanted to do it. We could only have 28 authors this year, but I have plenty lined up for next year and the year after.

Who are the 28 authors featured in the book?

Is the book a collection of short stories or sexy scenes from existing books?

This year’s anthology is a collection of all-new, exclusive scenes from each author’s most memorable characters–kind of like a hidden sneak peek into what readers haven’t seen before. Whether it’s an outtake, a deleted scene, a continuation, or even a prologue, each story can only be read in the anthology. We’ve found that the fan base of each of the authors were hungry for more from their favorite characters and really appreciated the chance to catch up with them. It also offers an introduction to those characters for readers who haven’t read them before.

How hot are the stories…can you give us a sense of the range of hot scenes we can look forward to?

Will the anthology be an annual event? What else is in store in terms of serving women with cancer?

The Books for Boobies anthology is planned to be an annual event. We also hosted another online event this year, like last year, to coincide as a release event for the book and we raised more money directly to the charity. I’d always seen BOOKS FOR BOOBIES as something that could directly help readers who are undergoing cancer treatments to offer an escape through our make-believe written worlds. Eventually, once all of our paperwork is complete, BOOKS FOR BOOBIES will be a charity. Sure, we’ll still raise funds for charities that we’ve worked closely with in the past, but I’d love to take it a step forward. I’d love for use to be able to collect Kindles, reading tablets, anything we can to be able to donate the actual patients themselves to use to read books during their trying times of treatments and procedures. I’d also love to have a catalogue of authors and books ready to give to them, donated by the authors themselves. We’re in the beginning stages of accomplishing this, but we hope to have it up and running for our 2016 event.

What are some of the other ways you and the other authors have helped raise money this year.

Before the book was released, we held a Kickstarter campaign in August to raise funds for promotional merchandise to advertise and promote the book. Readers who donated each received a share of the merchandise, such as: t-shirts, digital copies of the book, paperback copies of the book, bumper stickers, postcards, tote bags, and even signed copies of the book. We wanted to get readers excited about the experience and were overwhelmed by the response. We also have a tee spring campaign for additional “I Read Books to Save Boobies” shirts here, as we had an outpouring of requests for shirts. Those are available only until October 29. All donations for the tee spring will also be donated to the NCBF along with the royalties of the book.  There is also a direct portal link that can be used anytime of the year to donate to the NBCF through BOOKS FOR BOOBIES.