How Travel Has Changed for Me

My Trip to Croatia And Madrid 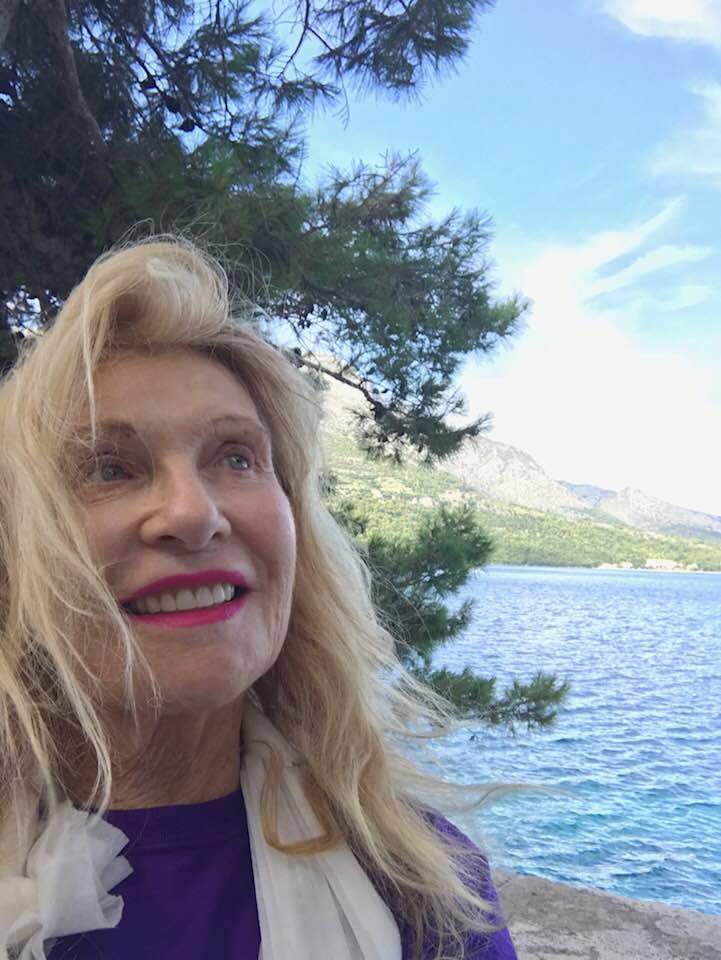 I used to seek out the hottest disco in town dancing till dawn, now I seek a nice comfortable bed around 10:30 P. M.

My recent trip to Madrid and Croatia was a series of LOSSES and GAINS. I entertained myself for 28 days and nights with new experiences and by testing my own capabilities.

Is this my new fun? Perhaps it is! I love challenges; I love experiences. I consider good and bad equal in my growth.

As I left NY airport for my connecting flight, check-in asked me for $90,00  for my one piece of luggage.

She said my overstuffed suitcase would not fit into overhead bin according to their sample device. “Ok, I understand.” So I removed several items transferring them to my back pack and tried again. Nope she said, “Won’t fit, $90.00 please.”

Not I….I took more stuff out  of my overstuffed suitcase and tried again, but she still shook her head, “NO.”

“Are you having fun with me?” I asked as the line behind me got longer?  Suddenly a strong young girl stepped forward, took the bag and with all her might pushed it into the sample cage and we got a “YES.”  I thanked her with a hug, she winked and said she was really strong.  That put me $90.00 ahead  and the thrill of  beating the airlines. A total GAIN.

My GAINS were wonderful. Madrid, an exciting busy city filled with restaurants, shops, the Prada Museum, the gorgeous infamous Retiro park with a lake where I spent an afternoon, marvelous cafes, lots of Starbucks and memories of being there with my husband in mid-60’s. 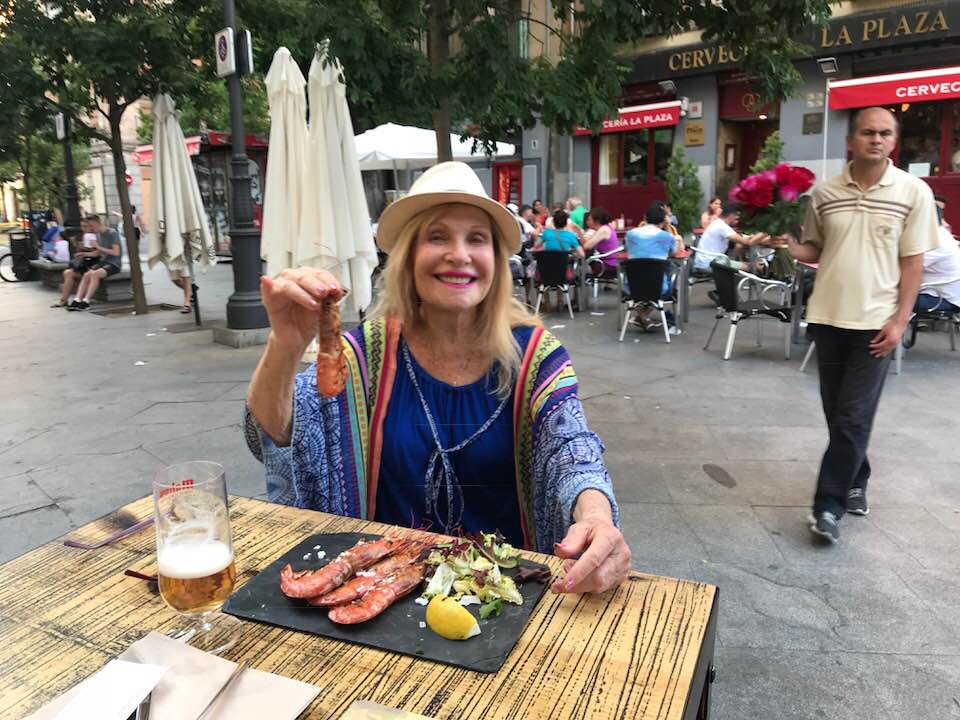 I was LOST on the subway in Madrid going in wrong direction and finding myself out of Madrid somewhere in the burbs. I had taken a dip in their municipal pool filled with at least 1000 people jumping kicking screaming.  When there are screaming kids, I scream with them; that way I am distracted from their sounds.

I had a GAIN here because instead of waiting on a three block line for my $2.00 entrance ticket, I went to the departing gate and asked those leaving, “Do you still have your ticket; can I have it?” So here I GAINED time but LOST money again for a taxi to get home after my exhausting subway ride.

I LOST the book I was reading at the last chapter, but looked forward to reading the ending on my return to Madrid Cafe,  I knew I  left it in a popular cafe.

Then came Croatia, the most beautiful country I ever saw; mountains and turquoise sea with small sailboats dotting the water; there are thousands of blue green islands, huge yachts decorating the harbors one after another wanting to know, see, meet the owners. 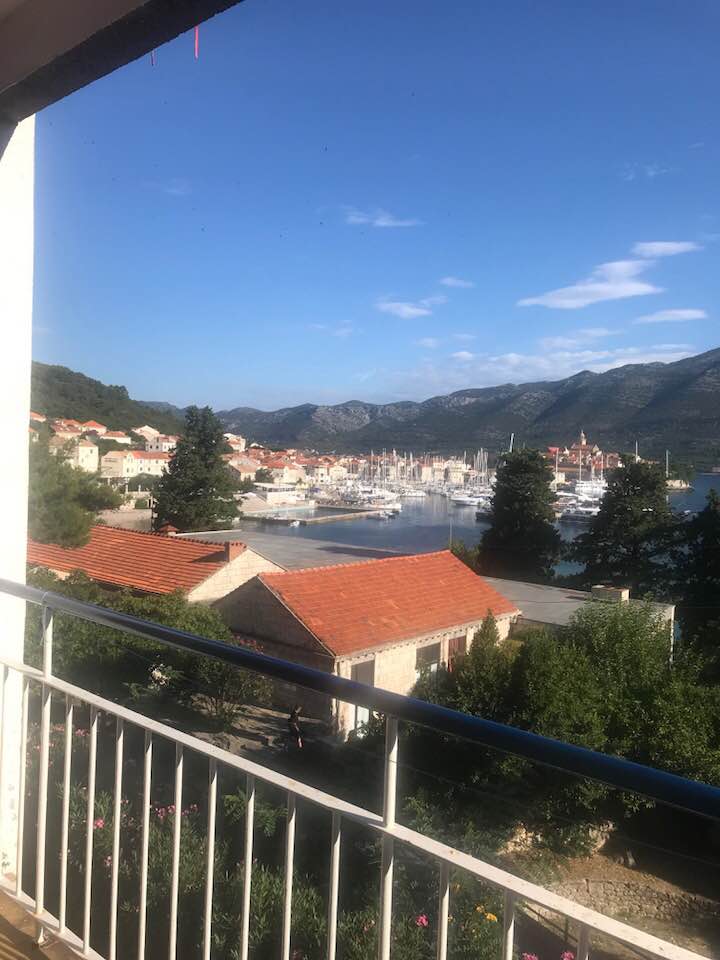 I had only been traveling for about four days when I thought to myself that I did not feel purposeful. Be careful of what you ask for as God gave me a purpose as you will read.

I LOST $350.00 in cash and wasn’t even robbed; I simply dropped it somewhere; Back-tracking the next day, it took hours out of my day asking people /waiters if they found my money, but strange as it may seem, nobody saw my wad of folded bills,  I subtracted that from the $90.00 I had saved.

Then at booking.com, the computer booked 2 hostels/hotels for me on the same day and time.

I was a no show at one.  I LOST one deposit but GAINED a nicer room.

I slept in hostels which have come a long way. I had my own room penthouse suite for $55.00 a night, I used Airbnb, private rooms and then my grand Steven King Hotel as I call it, huge hallways, not decorated since the 60’s but clean large and comfortable with my own terrace overlooking the sea all for $60.00 a night; total GAINS for my budget.

In Dubrovnik I had not booked a place. I was a little concerned where to stay as the games were going on and wondered why I would chance a room there. However, as I got off of the bus a lady approached me. She said she had a room nearby. It was terrific, a bit away from the crowds, reasonable, safe, enjoyable and walking distance into the old city. I GAINED because I didn’t book ahead trusting that I would find the right room.

A week into the trip an old boyfriend called making several wild gestures for us to repeat several of our pleasures back then. I was so unnerved from thinking how exciting it would be or not be that I was distracted out of my present mind.  I tried to climb a small wall off of the beach and fell backwards LOOSING my balance and the use of my right hand  for the rest of the trip.  I wrote to him afterwards “You crack me up.” 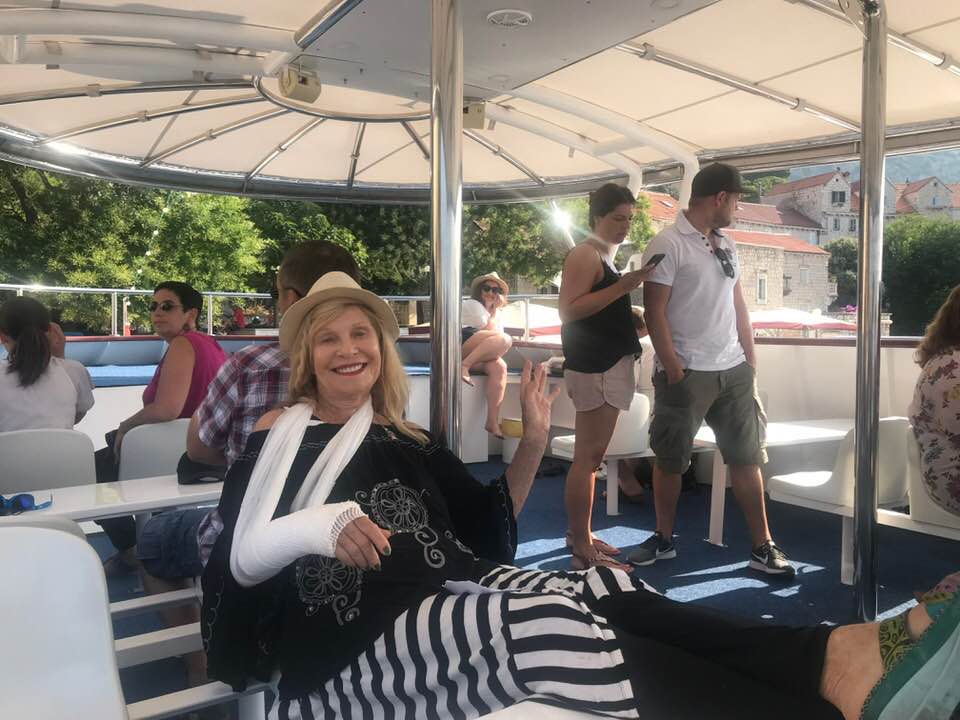 The next day I fell out of the shower confusing the soap with the water hose by trying to protect the cast on my arm. As I was falling I was prepared to die knowing my head would hit the bottom floor tiles. Instead, my head hit a small wicker table placed exactly at fall point allowing me to GAIN life again. I now had that purpose—- to take care of myself.

I GAINED care and protection and friendship from the owner of the hostel and two other guests who came to my rescue after my fall on the beach. The owner came in his beautiful car taking me to my room and calling the paramedics. I GAINED the friendship of the lovely girl who wanted to accompany me to another island to get an x ray leaving her work schedule; I GAINED the amazing care I received in Croatia hospital where the doctors set my bone expertly.

Then I GAINED the knowledge that I was no longer a young girl gliding through Europe as a back backer.  While I am still capable of achieving my travel goals, (maybe even more capable having one hand) I was not attracting the party goers/the trend setters, the spontaneous conversations with others that I used to find so easy to attract.

Nobody seemed to notice me. Where did I go?

I had grown up and grown out of the lifestyle of discos, alcohol, boyfriends, late nights into joining the mass of tourists who were as ordinary as myself. I would get some surprises, twice tourists stopping me on the street to admire how I looked; an older woman with class and style. One young girl photographed me; she saw herself in me——- thinking she would like to be me when she reached my age.

My food was mostly pizza and Greek salad and ice cream so I GAINED the fun of eating fun and naughty food. I loved sitting in cafes on the islands on a swing chair watching the boats go by and sipping cappuccinos. I would order my cup of cappuccino and a large glass of ice and then would pour the coffee over the ice.  It took time to get this straight as their iced coffee was filled with sugar and ice cream.

I GAINED insight into how cruel people can be reading my true crime books that kept me entertained. 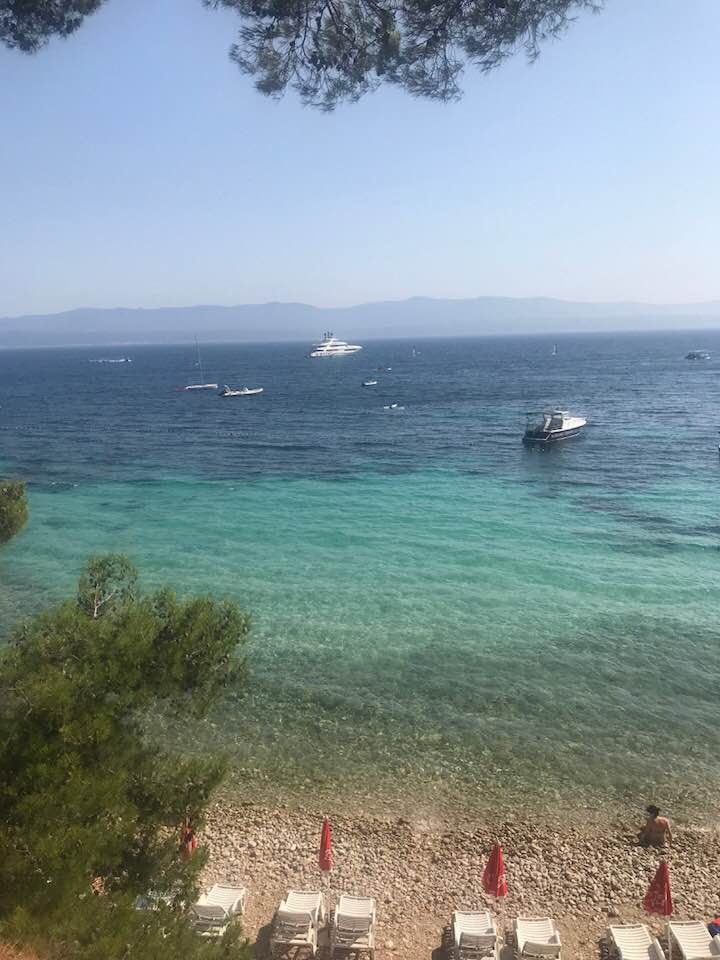 I GAINED not going into the sea doing my water aerobics as planned as I was now in a cast. The sea was cold the beaches all rocks instead of sand. Instead, I walked and walked and walked looking at the beauty of the old  walled in cities, new hotels, colored water,  sea breezes,  endless coasts, hills, mountains, people, dogs, kids eating ice cream and tourists coming and going some on crutches, some in wheelchairs but we were all there to enjoy.

I GAINED not to make a fuss when inhaling the smoke from the Croatian addiction of smoking. I GAINED knowing they are lovely people, kind, generous people living in an exquisite environment that they probably take for granted as we all tend to do.

i GAINED the advice of a tour leader who told me to go off my beaten track and visit his favorite spots in Croatia which I did.

The world is filed with couples, couples with children which is not anything new. I was alone on ferry boats going from one magnificent island to another, then traveling on a bus with three young guys who were seeing the world who never spoke to an 82-year-old woman in their life. They seemed truly entertained as they loved laughing with me as we watched the magnificent scenery going up/down the coast. I GAINED their attention. 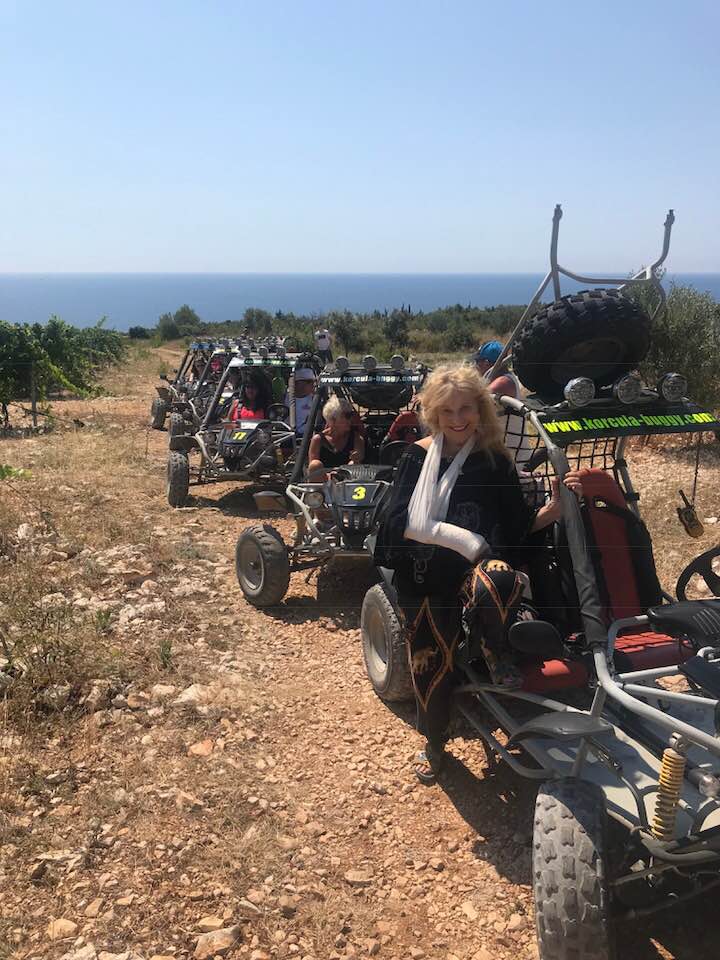 At one Airbnb the owner made sure I had a ride into town by awakening one of her guest vacationers to drive me. He left his room and took me where I needed to go; I would have been stranded. I GAINED the company of a kind Bosnia gentleman who made sure I was safe.

I GAINED the attention of the man on the bus who watched me dragging my red suitcase with my good hand and had it ready for me when I came off of the bus.

I GAINED not rushing anywhere, yet ending up in Dubrovnik at the moment the world cup was being played. There I was standing in the middle of the square in the sacred old town of this incredible city with thousands of people cheering for Croatia to win. Who knew?

I GAINED a wonderful seat mate on the 9-hour trip home who happened to be Croatian and was able to interpret my hospital bills. 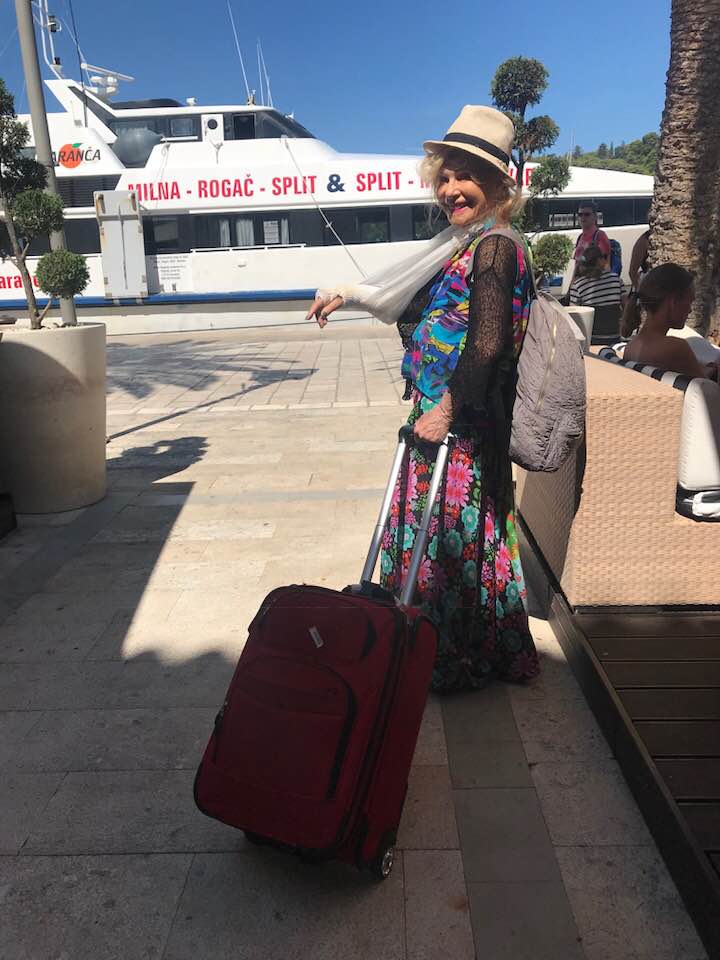 What is travel? It is to experience, something new, somewhere, walking down a new street ready to meet or not meet; it is to see the wonders of nature, it is survival of the fittest at whatever age, and then it is to come home to friends, family and  the place I live gaining new insights into another part of the world I had longed to see. 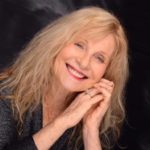 Carol Sue Gershman lives a spirited ageless life. She is an adventurer, entrepreneur, author, and singer. She has reinvented herself at different stages of her life and has a project going at all times. She started a successful party design business in the 1970’s and later began to invest in real estate and was drawn to the renaissance of South Beach/Miami Beach. Traveling is her passion which she only does solo. She is the author of two books – a memoir and self-help book. For the last six years her life is about going to open mic’s which led her to two sell out shows which she produced, directed and starred.