There are a lot of layers to uncover with the Paula Vogel play, Indecent, now on Broadway at the Cort Theatre. This is Pulitzer Prize winner Vogel’s first Broadway show.

Themes that are addressed in this piece include artistic freedom, societal boundaries, fluid sexuality, relationships of all sorts, passion for theatre and the written word, and devastating historical truths.

The structure of Indecent is extremely intriguing. It follows the true story of a troupe of actors, who against all odds and challenges, are committed to performing the play, Scholem Asch’s “God of Vengeance.” We go back to 1923 and a time when “God of Vengeance” features love between two women; the daughter of a brothel owner, and one of the ladies who works in the brothel below their apartment. Although this scandalous (at the time) play was triumphant in Europe, when it came to Broadway, the production was closed down and the producer and cast were thrown in jail.

Indecent was critically acclaimed when it ran off Broadway and although written by Paula Vogel, the credits explain that it was created by Paula Vogel and Rececca Taichman. Ms. Taichman also directed this very unique theatrical experience, which  runs over 100 minutes without an intermission.

Musical interludes performed on appropriate instruments are played throughout by musicians who are on stage, and even some of the actors. 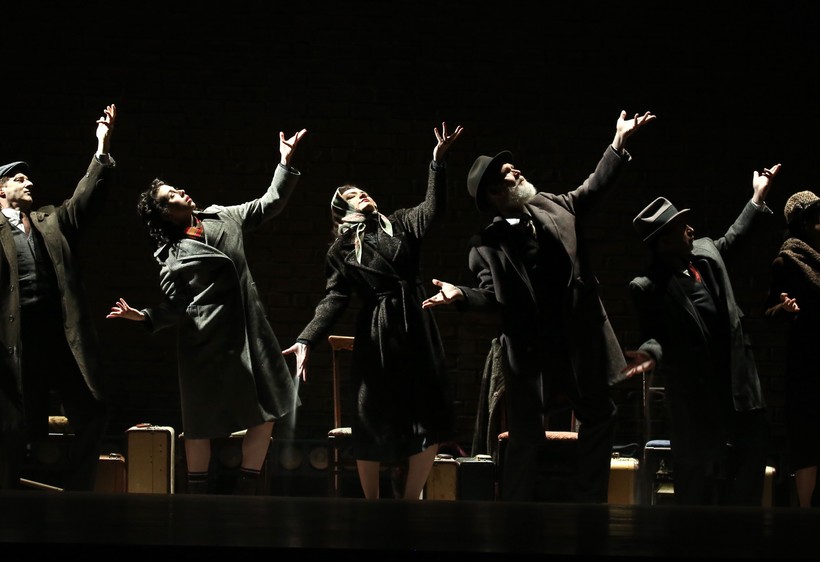 The play is dense, exotic, beautifully performed and stylized, aided by projections explaining where we are, what language is being spoken and more.

At it’s best, Indecent is tremendously successful in its storytelling, unpacking the back story to the play, while unfolding the important themes of the controversial work.

Several conventions are used that work just beautifully, beginning and ending with the sand that pours from the actors’ sleeves. The incredibly talented cast are all excellent in their respective roles.

What did not work for me was the length of the play, with no break for the audience.

I felt that some of Indecent was over-written, and at least 10 minutes could have been cut from the piece. I thought it was going to end at a very powerful moment, (which to me would have been an intense and moving ending), but it continued on past that moment to yet another scene.

Also curious to me was the move from a perfect off-Broadway house to Broadway.

I’m always interested to know how a complicated and specific play of this nature will be marketed.

For anyone passionate about theatre and the arts, the choices that committed people who stand up for their beliefs make, set against the backdrop of a shameful history, this is surely a play that will not disappoint.