Jasinda Wilder brought sexy back for women of a certain size in her bestselling Big Girls Do It series.  She cracked open our hearts with the emotional, poignant, and gut wrenching love story in Falling Into You. She gave us a good girl with a big problem, a hot movie star to help, in Stripped. And she made us all feel the heat–the searing, lusty, jump-your-man, sexual kind–in the Alpha Series. 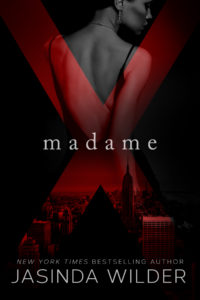 It is the compelling tale of a woman whose work it is to transform the inept sons of the wealthy and powerful into decisive, confident men. She is confident, cultured, and cutting in her approach.  Yet behind the sophisticated façade, she seems lost and trapped between a dangerous past she can’t remember and the protection of Caleb, a sexy, seductive man who claims her body—and her soul.

As a hugely successful, prolific, bestselling independent author, she has published more than four dozen books in three years, and not all in the same romance subgenres. Although many of her fans have come to know and love her handsome hubby, author Jack Wilder, not everyone realizes that they are not just partners in life, but partners in publishing, as well.

Books are not the only thing they have produced in multiples. They have six children—many of them little ones, including a new baby—that they are raising on a beautiful farm in Michigan, with plenty of animals around. They also have a new wine label, Wilder Wines, that will launch in the near future.

Somehow this lovely and talented couple is birthing new books on a regular basis as they manage family life, kid and animal emergencies, appearances, and writing, writing, writing.

I spoke with Jasinda this week about the new addition to the wilder publishing corral. 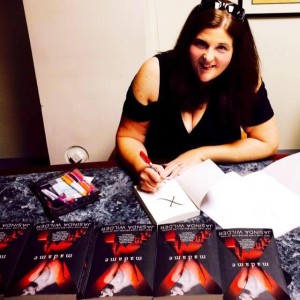 A.C. ROSE: Wow, Madame X is so exquisitely written, and also on the dark side. Anyone or anything in particular that inspired this story? Is there a real Madame X out there somewhere who whips indecisive, inept sons of wealthy men into shape?

JASINDA WILDER: Thank you! Actually, this book was a dream. I woke up at like four am from a dead sleep with the characters and the basic plot just there in my head. I mean, I’d been formulating an idea for months, but that dream just bolted it all together.  As for there being a real Madame X out there? Not that I’m aware of. Although if there were, I’d recommend her services to a few people. LOL!

You write in many genres and have given us many favorite characters. The mysterious Madame X seems like a different kind of character for you? What drew her to you, or you to her?

Oh my, yeah. X is a totally different sort of character for me. She’s both powerful and vulnerable at the same time. She’s strong, but weak. She’s a character of so many dichotomies, and I think that’s part of what really drew me to her.
Your Madame X is bundle of contradictions–a dominant in her work and submissive to the one man who keeps her captive in his dominance. Do you think she reflects real women–who are powerful by day yet are submissive in their love lives?

Hmmmm. That’s a tangled question, honestly. Lots of answers. I think she could reflect real women. I mean, there’s an exception to every rule, but I personally think that a lot of strong, independent, powerful women also want to be taken care of, want to give over control. Not have it taken, not have her choices stolen, but to voluntarily give control and choice over to the one man she trusts implicitly. X sort of represents that belief, in some small way. I don’t like using terms like “Dominant” and “Submissive” because especially in the romance and erotica worlds, those words have very specific connotations that I’m in no way trying to evoke in this book.

The sex scenes are hot and yet drip with such refined language. Was it fun channeling them through the voice of Madame X?

Oh god, yes. So much fun. I’m really in love with the idea of a powerful, controlling man that is educated, refined, eloquent, linguistically sophisticated. I get sort of sick of the alpha male who does nothing but curse and grunt and toss women around. The caveman mentality, I think of it. A man can be forceful, in control, hard, even brutal, and yet be able to use two and three syllable words and not curse all the time. Cursing is easy. Making a character who is totally alpha that doesn’t curse? That takes something a bit more.

Our readers of a certain age may ask if your character has anything to do with Madame X, the 1966 movie starring Lana Turner.

Nope. Not at all. I don’t think my husband or I have ever seen that movie, TBH.

You write across many romance subgenres–angsty/steamy, sexy/light, to suspense and paranormal. What is the theme that runs through all your books?

Would you say that Madame X has the Jasinda Wilder ‘love heals’ signature, or is it a little different?

I really don’t think there will ever be a Jasinda Wilder book that doesn’t have that theme in it somewhere.

Did you fall for Caleb, too?

Of course! How can you not? He’s an asshole, but he has so many layers, and there’s just so much nobody knows about him. He’s so sexy, and you just can’t help but to be curious.

Will we see more books with Madame X and Caleb?

Well….I would never leave a book on a cliffy like that if there wasn’t another one coming. I’m not that mean.

This book represented a big publishing deal with a huge publisher. How did you know it was time to try publishing the old fashioned way?

It was just time to try it. The right publisher, the right editor, at the right time for us, and for this project specifically.
I know how committed you are to Independent Publishing, but do you think moving forward you will continue doing it both ways as a hybrid author?

Of course I will continue to write as an Indie. I have too many story ideas percolating in my head to be totally trad! I’m just not that patient. 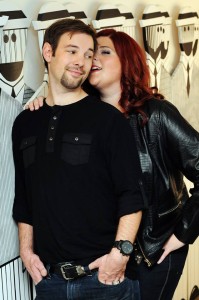 Congratulations on your newest Wilder. Any special plans for managing six kids, a farm full of animals, and a busy writing career in the months to come? Wine?

WINE, lots of wine, LOL. We have a nanny help, and the other kids help too. Basically, the plan is to keep on doing what we do, just with one more cute little Wilder to fill the house with love.

Exposed: A Madame X Novel, will be out on March 2016, and can be pre-ordered here.