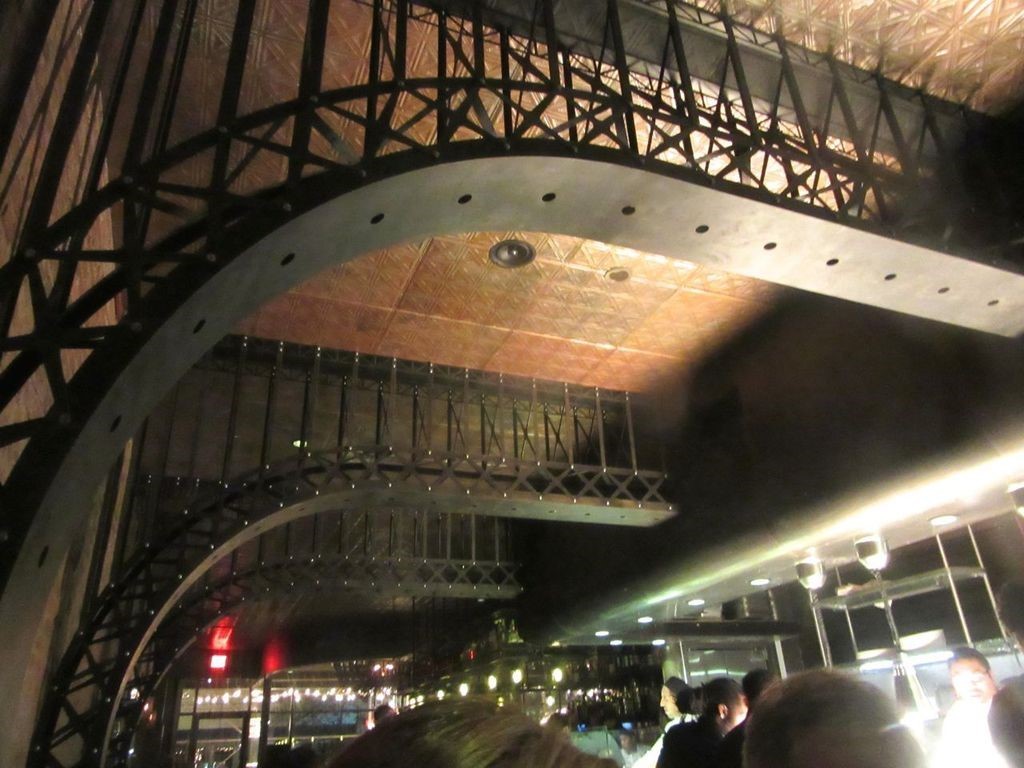 As the new restaurant season heats up with a barrage of ambitious launches and sequels, fried chicken hysteria, and The Times critic awarding two stars to a veggie burger joint, my eye fell on brand new Kat and Theo in the Flatiron neighborhood. The chatter that got my attention was headlined Chef Paras Shah’s El Bulli, Per Se, and Momofuku Noodle Bar credentials.

As if she’d read my mind or maybe Jacques Torres’s name on the reservation last Thursday, the hostess dispatches me and another early arrival I collect at the bar through the narrow avenue to a booth opposite the open kitchen. There I see the chef himself, up front under the glare, shouting firing orders. Most open kitchens go for restrained murmuring. I admire his uninhibited showmanship. Still, I can’t help remembering that adage from the first days of open kitchens: you need to remember not to pick your nose.

Never mind, the two of us admire our surroundings. My friend, a decorator, is impressed by the invention. The unusual metal trellis dividers on the ceiling have a smart Eiffel Tower look, and suddenly yet another wall of exposed brick seems not a cliché,  but special. A few of the staff hairdos are monumental too.

It’s still in the 80s outside and with the arrival of Torres and Madame Chocolate, his wife Hasty, we decide to share a bottle of rosé. There are three options none of us know. Hasty suggests we try a taste of all three. Jacques leans toward the Corsican wine because it’s French. But clearly, he decides, the dark pink Basque bottling, Txakoli Getaria, is best. It’s also the most expensive at $60, but makes a very pleasant backup to Chef Shah’s sometimes whimsical improvisations on Mediterranean standbys on an abbreviated menu. 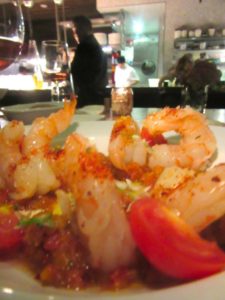 Uncooked heirloom tomato and aioli nuzzling luscious heads-on raw prawns, and crisp-fired octopus with gigante beans fried till crackling are as original and exciting as the metal filigree. These are our favorites of the starters (ranging from $10 to $19).

Listed as “clams” under “Small Plates,” five small clams and two rings of white onion lined up in a warm, green-tinged broth at the bottom of a giant bowl are unexpected and delicious. I can’t say I would have known the steeping involved charred leek and ras el hanout if the menu had not clued us in. 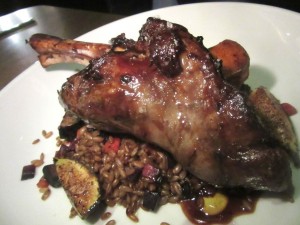 Shah’s cooking may sound too esoteric for everyday yelpers. But innocents can revel, as we do, in the $34 dinosaur lamb shank, caramelized and fatty, with lamb belly and figs – easily a dish for two, maybe even three. There’s no challenge either in the fine Flatiron steak with sunchoke puree and a crisp fried sweet onion cake, even though the knobby sunchoke cuts themselves are not quite cooked enough.

A smallish woman stops by, introducing herself as Renée Typaldos, the owner. My friend asks who was the designer. “You mean those girls that almost killed me!” she says, a reincarnation of Gilda Radner if she’d lived a while longer. “We weren’t even finished when we opened.” The designers, Dara Young and Anna Niedermeyer, get the credit for the clever ceiling, the stone fireplace, the white oak floors. 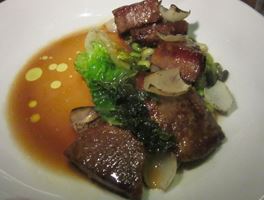 Renée switches to Mama Rose. “You didn’t fall for tonight’s special,” she chides us. “Tongue pot au feu.  The sous chef had an idea for the dish, and I told him to go for it. Why are Americans so afraid of tongue?” she muses.

We’ve already ordered mains, but we happen to like tongue. “Send us a half portion of the tongue,” I say. It’s the best dish of the night, the meat richly caramelized, and served with flageolets. The undercooked beans are a minor carp. “They undercook all the beans here,” Jacques complains. “It’s the California style.” Better than over-cooked, we all agree, but why not just right?

Where you might ask, has Chef Shah been tripping that he envisions carpaccio with caperberries wreathed in a “tonnata” of boquerones? Was it the externship at Per Se? Or the grind at Momofuku Noodle Bar after graduating from The Institute of Culinary Education in 2007? That’s where he was hustling when he won an  ICEX Spanish Trade Commission Scholarship in Spain that meant gigs in Echaurren in La Rioja, Saunto Mauro in Madrid and ultimately at El Bulli in Roses.

Not all Chef Shah visions are equally successful. The white garlic soup with pickled melon and a rash of surryano ham bits resembles a white gazpacho, but is not assertive enough. I’m not wild about “Matrimonio a  la Riojana” – the rioja wedding – a marriage of charred shishitos and anchovies stuffed into very good house made flatbread.

The properly just-cooked skate in a pool of corn chowder with a few discs of pickled beet might be better if it were browned in butter. And the duck with  peach and smoked potatoes would be more impressive if the foie torchon were seared and rare. 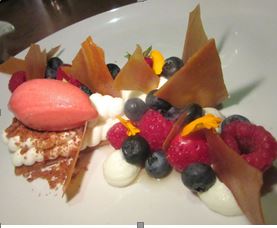 The young woman standing just in front of us so serenely at the end of the kitchen line turns out to be the pastry chef, Serena Chow, author of the houses four $14 desserts. Her cheesecake with berries, maple and chestnut is wildly rococo – an instant Instagram.

Renée comes back to our booth with her husband, Andreas. The place is Kat and Theo for his Greek parents, Katerina and Theodosios. Of course, she’s nervous. They’ve invested a fortune in this 70-seat spot on a street of many dreams. She’s recognized me and she’s wondering if I will be sending readers around the corner of Fifth Avenue. Well, yes, I will. And I’ll be back, too, to taste the fall menu.

Photographs may not be used without the permission of Gael Greene.