KEVIN KING : Fall of a Sparrow

A diorama is a distinctly controlled space, it’s a moment captured in time. In Kevin King’s meticulously painted dioramas, birds and insects find themselves in a unique environment, that of his imagination. At first glance there is astonishment at the technical virtuosity one usually finds in16th Century Dutch still lifes. However, it is in looking more closely, that a sense of the otherworldly becomes apparent. Flora has traveled from underneath the ocean to mutate with mushrooms, lichen and tree branches.

Globes and droplets, shining like jewels have taken the place of fruit and flowers. 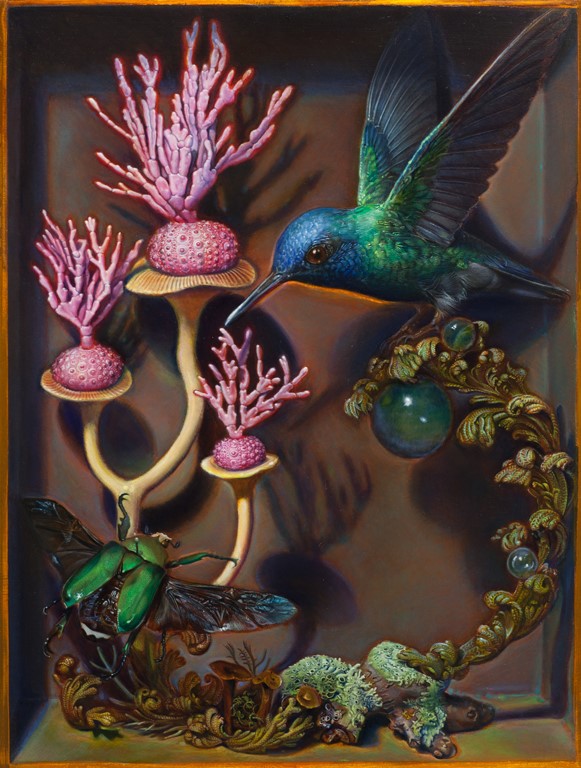 The exhibit is introduced in the Gallery’s entry area by several classical ornithological studies in muted tones, a deceptive prelude to the intensive color and mystery of the work to come.

The main room is dominated by “Fall of a Sparrow,” an installation made of a multitude of materials, including branches, a wasp’s nest, bark, feathers, sculpted birds, and insects. Attached to delicate curved copper wires, butterflies and dragonflies appear to be in flight, their shadows adding to the sense of movement. Lichens, painted a bright orange, and drops of melted copper sparkle throughout the neutral colors of woodland elements.

The rest of the room is filled with radiant images composed with scrupulous detail. Painted on sheets of copper, there is an underlying, warm illumination to these mesmerizing pieces. King uses a palette of iridescence as found in all its eternal forms; feathers, eyes and insect wings. These intimate universes dazzle with vibrant magentas and ceruleans, golds, mandarin, and rich cadmium reds. 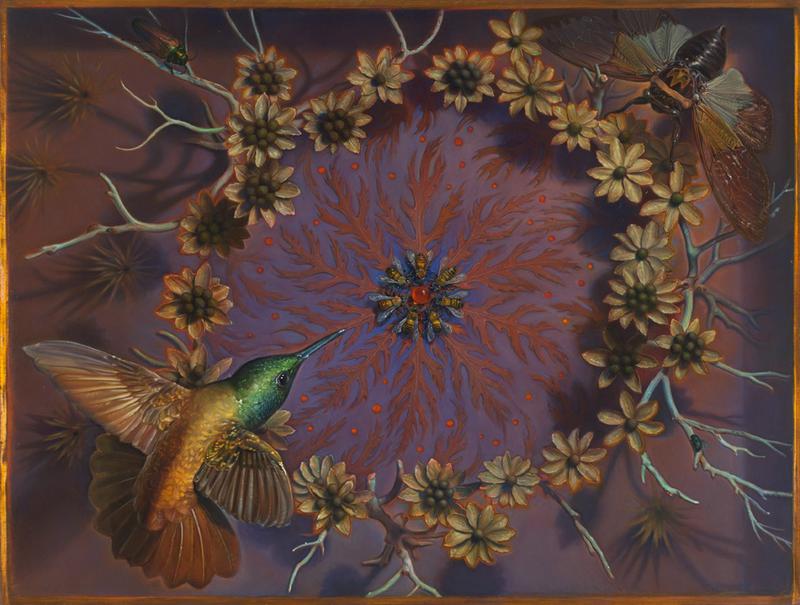 “Diorama with Bees” portrays a hummingbird gazing at the center of the picture. There, within a wreath of dried seed pods, what at first looks like the center of a flower, is eerily, a circle of bees surrounding a shinning orb of red liquid. Rust-colored, fernlike shapes emanate from the bees’ circle, enlivening the surrounding space. An insect with amber and sage wings, lovingly rendered, is also transfixed by the enigmatic coven at the painting’s center. 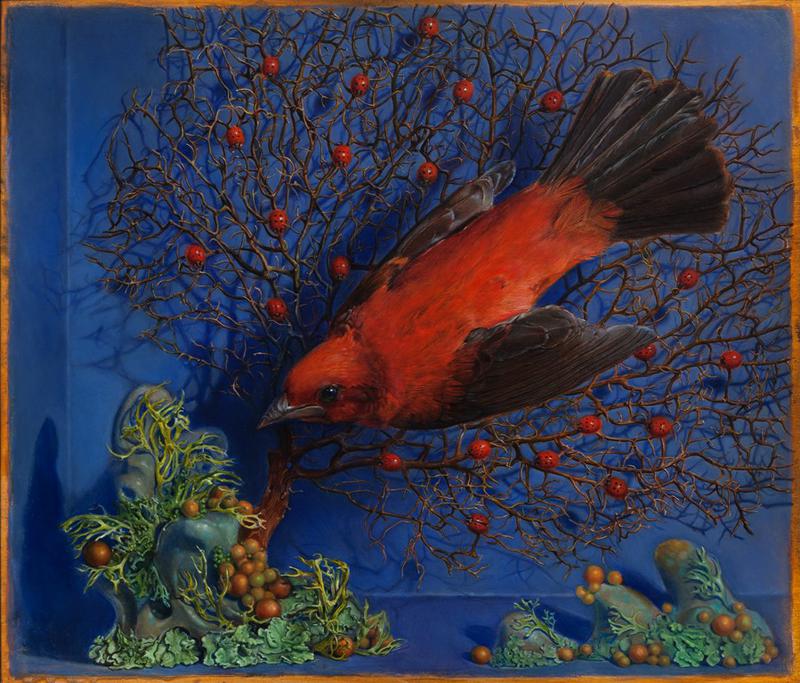 A Scarlet Tanager finds itself a stranger in a strange land. With its red feathers a brilliant contrast to the ultramarine background ,“Diorama with Ladybugs”places it in a habitat designed by a Surrealist. What at first look reads as berries on the branches, on closer inspection, turn out to be almost mathematically aligned ladybugs. Amorphous gray shapes that could have been added by Dali at the bottom of the space, are studded with seaweed, lichen, and tiny yellow orange spheres, each fastidiously depicted. 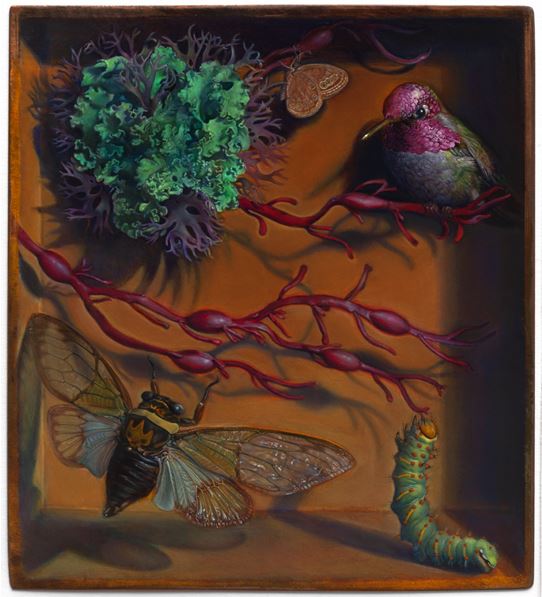 Within the illusion of space depicted in “Diorama with Ruby Seaweed,” magenta seaweed has risen from underwater to support a male hummingbird and intrigue a curious caterpillar and cicada. A moth rests on bright viridian and deep purple vegetation that’s found its way from neither water nor land.

King has a beloved collection of preserved butterflies, seed pods, dried leaves, branches, and insects, a collection that could be found in the secreted storage drawers of a museum of natural history. He carefully arranges these materials, constantly reconsidering relationships, in shallow boxes. From there he can control the light and shade, and a painting of a fantastic, invented microcosm, part dream, part exquisitely rendered miracles of our own world, can begin. 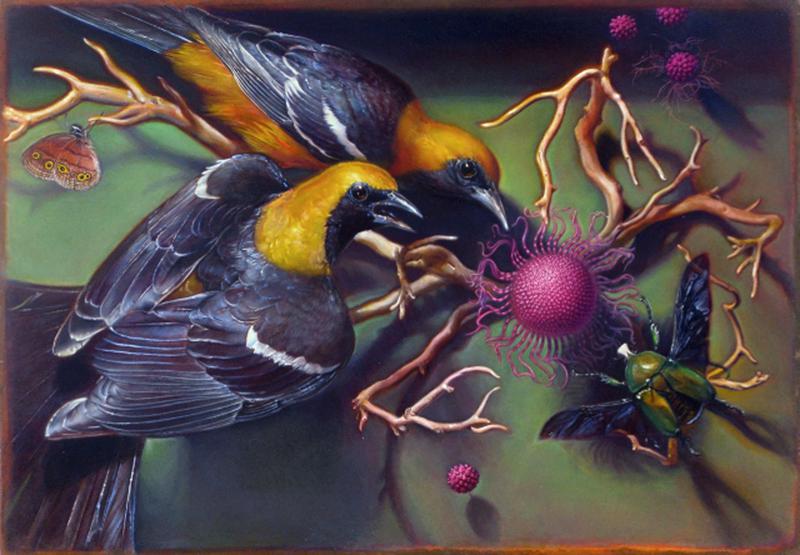 B Where and when did you first encounter dioramas?

KK The first time I remember seeing one was as a very small child, maybe less than 5. It was at the local library and I was fascinated. Years later I came across the same one again and it had greatly changed. It had a layer of dust on it that had seeped behind the glass. I thought of the bottles of Morandi with the dust on their shoulders and I began a drawing right then.

B Why did you decide to incorporate copper into your paintings?

KK The copper support I had wanted to try for quite some time. When my now husband, Tony, moved in with me he brought a large sheet of copper from his printmaking days and I talked him into letting me cut it up for painting. The paintings from the 17th Century which use copper had had a draw for me as long as I can remember.

B What ideas are exciting you now?

KK So many things excite me now as an artist. First is the perpetual belief that this new painting will be the one that finally lives up to my fantasy of what I can achieve.

Then there is the way in which I work that allows for me to put anything that I’m fascinated by in a painting. It could be some extraordinary bird or crazy insect that I hadn’t known of.

Many of my paintings are inspired by paintings of the early renaissance, Indian and Persian painting so coming across a beautiful example often is pretty thrilling as I almost immediately think about how I could interpret some part of it for a painting. Right now I’m visiting the Boston museum and am loving the Rothko paintings and finding myself wanting to use his sonorous brooding colors.

There is also the pure learning of how to use the oil and copper combination to do something that hasn’t been done before.

KEVIN KING: Fall of a Sparrow