What do Kate Hudson, Alicia Keyes, Jennifer Aniston, Russell Crowe, Sting and Gisele Bundchen have in common?  Seems like a pretty disjointed list but if you guessed that they are all “rich and famous” you would be right…however, the real  common denominator is the practice of Kundalini Yoga.

Some attribute their youthful appearance to this form of Yoga……”better than botox”……………says one and Oprah herself likes the divine chants which are part of the practice.  This ancient practice, sometimes referred to as the mother of all yogas, focuses on breathing, movement, chanting, and meditation…and has been said to produce an elevation in consciousness, an expansion of awareness and promotion of a greater sense of physical and emotional well being.  Sounds pretty good, doesn’t it?  If your interest is piqued, here are some basics of this very popular practice.

WHAT IS KUNDALINI YOGA?

Kundalini is derived from a Sanskrit word for a “spiritual energy or life force located at the base of the spine”, conceptualized as a coiled up serpent.  It is further related to a latent female energy and untapped potential located around the sacrum, or “sacred bone”.  The idea is that through the practice of Kundalini, we can move that energy up the spine, through the body and out through the crown of the head, by use of seven chakras.

The ancient teachers of Kundalini Yoga have said, “The process of growth through Kundalini Yoga is a natural unfolding of your divine nature.  Like a snake, you will need to shed your old skins to become more of who you are”.   The ultimate goal of Kundalini is to increase self awareness by silencing the mind and unblocking your chakras so that vital energy can flow freely.

The ancient teachings of Kundalini Yoga remained secret for thousands of years, only taught to the royalty and nobility until Yogi Bhajan brought its teachings to the West in the late 1960’s.

While the practice of Kundalini is available to all, it is particularly suited to those who are looking for a spiritual practice combined with a physical workout…..and its physical and mental benefits appeal to both beginners and advanced yogis alike.

KUNDALINI:  It Starts With “Tuning In”

All Kundalini classes begin with a “tuning in”, a chant designed to clear and neutralize the mind…followed by a brief warm up for the spine, a “kriya” (which is a sequence of movements combined with breathing techniques), and a closing meditation or song.

There are simply hundreds of kriyas used in yogi techniques – all of which benefit the mind and body in different ways.  For example, there are specific kriyas designed to detoxify and cleanse the body, others to help with anxiety disorders and depression, and those that are said to allow the body to free itself of stuck emotions, paving the way for a lighter, brighter state of being.  In Kundalini Yoga, it is believed that practicing a particular kriya every day, for 40 days, is what is needed to form new habits and get rid of old ones.  It is important to note that some kriyas can be very advanced in nature and should be explored with the guidance of an advanced teacher.

Chanting, singing and sound (mantras) are key components of Kundalini and most classes begin with the Adi Mantra which means, “I bow to the subtle divine wisdom, the divine teacher within.”  Another common chant is Sat Nam which means “Truth is Your Identity”, which reinforces the divine consciousness in all.

Each Kundalini Yoga session has different poses that involve movement, breathing techniques, mindfulness and a mantra.   Most classes are closed with a period of deep relaxation set to the powerful healing sounds of the symphonic gong or music, followed by a meditation, a collective song and blessing to end this period of transformation.

ON WEARING WHITE IN A KUNDALINI CLASS

Wearing white is common in Kundalini, thought to ward off negative energy and to extend one’s own energy.  As Yogi Bhajan said, “Colors create an uncontrollable action in your subconscious mind of inspiration, productivity and expansion.  Colors have an effect on consciousness.  We wanted to develop a progressive and spiritual method of all the colors, so we have adopted the one color of seven colors, which is white”.  Teachers will often wear a white head covering, to contain the energy within the body.

1. Builds Strength:  Many postures are held as long as 5 minutes, strengthening and toning muscles. Some of the more intense breathing exercises, like Breath of Fire, engaging abdominal muscles, can also build core strength.

2. Increasing the Production of Serotonin.  Research has indicated that regular practice of Kundalini     Yoga stimulates feelings of well being.

3. Reducing the Effects of Stress.  Studies indicate that the deep breathing techniques used in Kundalini Yoga can decrease the risk of hypertension, reducing stress and lowering both blood pressure and pulse rate.

5. Faster Metabolism and Improved Digestion.  Through the combination of breath and postures, Kundalini is focused on strengthening the core and diaphragm, linked to an improved digestive process and accelerated metabolism, allowing the body to process energy more efficiently.

WHERE TO FIND A QUALIFIED KUNDALINI INSTRUCTOR

On a personal basis, I have had the privilege of working with both of the Certified Kundalini instructors below and am a devotee.  Practicing Kundalini Yoga has truly opened new pathways of being and become an integral part of my “whole wellness” philosophies. 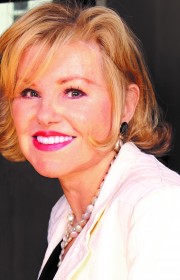 Anne Akers
Healthy Inside and Out

Anne brings a wealth of knowledge to her role as The Three Tomatoes’ Beauty, Health and Wellness Editor. As a champion of health and well-being for all, she is the Founder/Publisher of GLOW Beauty, Health and Wellness magazine; previous Founder of Castle Connolly Graduate Medical Publishing, publishing educational review manuals for doctors to pass their board exams in 15 different medical specialties and co-Founder of MDPublish.com, publishing and marketing books for health professionals. A winner of the SMART CEO award for "entrepreneurial spirit with a sense of give back to the community," Anne sits on many Boards for women's health, with a particular passion for Veterans and her current
role as Special Advisor to Operation Warrior Shield, "healing their hidden wounds". www.operationwarriorshield.com.